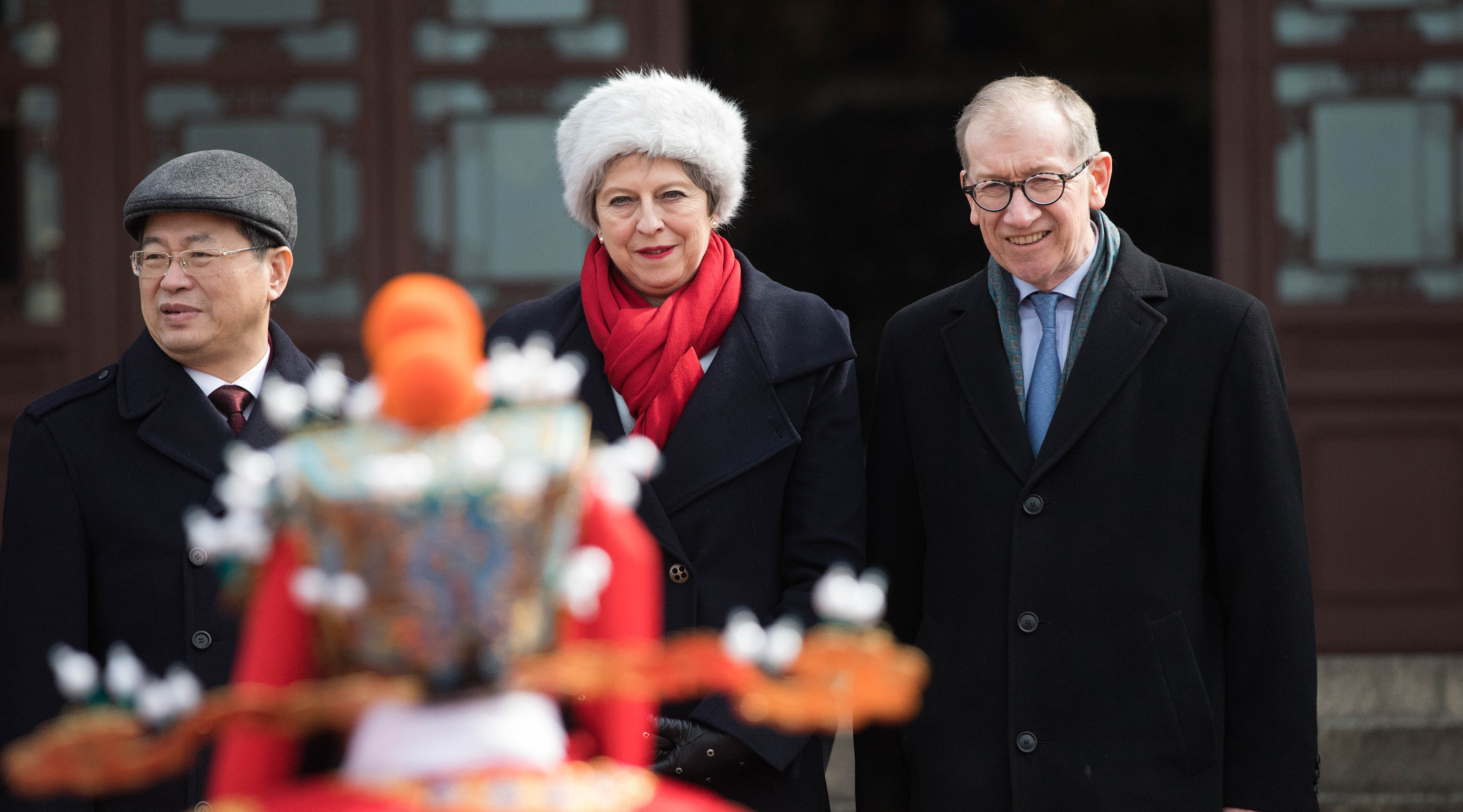 Theresa May and her husband watch an opera performance in Wuhan (Photo: EPA-EFE/Chris Ratcliffe/Pool)

The UK government promoted exports of live animals and shellfish to China for years, knowing they would be sold at “wet markets”, amid repeated warnings from British health authorities that these markets posed an influenza threat, it can be revealed.

Wuhan, the capital of China’s Hubei province, is now infamous as the epicentre of the coronavirus pandemic that is killing thousands and collapsing the global economy. The city’s Huanan Seafood Wholesale Market, believed to be at the heart of the crisis, was the largest in central China, covering the area of nine football fields with 1,000 stalls.

Customers at this “wet market” could buy a wide variety of meat and fish, as well as watch live animals being dragged from dirty, overcrowded cages and slaughtered before their eyes. Rare and exotic wildlife was sold at the market, with the likes of bats, snakes and pangolins alongside other delicacies like shellfish. Many creatures were kept alive in fish tanks that sloshed water around the market.

Many scientists believe the coronavirus came from bats. It recently emerged that among the first coronavirus patients in Wuhan was 57-year-old woman Wei Guixian who sold live shrimp at the city’s wet market.

According to an article by Chinese doctors in The Lancet, a respected British medical journal, 66% of Wuhan’s initial coronavirus patients were exposed to Wuhan’s wet market.

The novel coronavirus, known as SARS-CoV-2, is biologically similar to the deadly SARS virus, which is also believed to have come from bats and was traced to another Chinese wet market in a different province.

In response to the SARS pandemic of 2002/03, which killed 774 people worldwide, China’s government temporarily shut down the country’s wet markets — until August 2003, when the ban was lifted.

The UK government knew that Chinese wet markets continued to pose an influenza threat and Public Health England repeatedly warned British travellers to avoid them in 2014, 2015, 2016, 2017, 2018 and 2019 amid fears over bird flu.

While Beijing closed down the Wuhan wet market in January 2020, its earlier decision to reopen similar markets is now being criticised by British politicians.

Writing for the Conservative Home website on Monday, a former Cabinet minister, Tory MP Damian Green, said: “Whatever charges can be laid at the door of others, it is undeniable that the pandemic started because of unhygienic practices in Chinese markets, which have been known about for years.”

Green, who was Theresa May’s deputy prime minister, was reflecting Whitehall planners’ long-held view that a pandemic is one of the most serious threats to UK national security, on par with a large-scale biological or nuclear attack, and was much more likely to occur.

However, Declassified UK has seen documents showing that Green’s colleagues in government and the civil service have spent years encouraging British businesses to export live animals and shellfish to China, knowing the products were likely to be sold at wet markets.

In fact, China’s regulations on certain foods were more stringent than the European Union’s, according to the Shellfish Association of Great Britain (SAGB), which expressed dismay in 2014 when Chinese officials destroyed two consignments of live crab.

China had found “high levels” of the toxic metals cadmium and chromium in the crab meat, leading to Beijing issuing a ban on British crab exports in 2015. The SAGB reassured its members it would “try and mitigate any scaremongering by the media and the subsequent damage to trade”.

Meanwhile, a team from UK Trade & Investment (UKTI), the government’s trade promotion arm, began working in Wuhan in March 2015, shortly after Foreign Office minister Hugo Swire opened a new consulate in the city, where he said the “scale of opportunity” for UK trade was “staggering”.

In November 2015, UKTI and the China-Britain Business Council — a lobby group run by major British business figures — produced an “overseas market introduction service” for the Sea Fish Industry Authority, which is part of the UK’s Department for Environment, Food and Rural Affairs (DEFRA).

In the briefing, under a section on “business opportunities”, officials were told that wet markets were an integral part of selling live seafood to China.

It added: “Most leading importers and distributors have a presence and tend to sell to distributors who have a resident booth in these markets.”

By April 2016, DEFRA had managed to persuade China to lift its ban on live crab exports from Britain, after Beijing agreed to a “revised sampling and testing regime” for food exporters.

The following month, Karen Morgan, an Agriculture, Food and Drink Counsellor at the British Embassy in Beijing gave a presentation on the “Opportunities and challenges of exporting shellfish to China” at the Shellfish Association of Great Britain’s annual conference at Fishmongers’ Hall in London.

Morgan, who has boasted about eating worms and spiders, explained that the UK government was helping British companies on “live animal exports and animal products such as bovine or porcine semen”.

She observed that “affluence [was] driving up demand for meat, fish, shellfish” in China, where the country’s “food safety scandals” had seen an “increase interest in imports”, with customers willing to pay a premium for imported food.

According to Morgan’s presentation, which bore the UKTI logo, this situation was viewed as an “opportunity” for UK exporters while China’s “food safety legislation reform” was seen as a “key challenge”.

Days after Britain voted to leave the EU in June 2016, Morgan gave another presentation for UKTI in which she said Britain had supported the “trade resumption” of “live seafood” as part of its “market access negotiations” with China.

She said UKTI’s role in China was to “facilitate entry for new food and agricultural products, to reopen trade where it has been suspended and look for ways to keep that trade moving”.

The British trade push culminated in January 2018 when May went on a three-day trip to Wuhan, Beijing and Shanghai, under pressure to secure post-Brexit trade deals with China.

May said she hoped to “build our golden era of UK-China relations”. The South China Morning Post noted: “Wuhan’s inclusion on May’s itinerary seems surprising. The city rarely has been a destination of visiting foreign leaders.”

Wuhan is a hub for China’s factories producing technology for Western markets as well as scores of colleges. The city is twinned with Manchester in northern England and has close links with its university.

May addressed some environmental issues in Wuhan, such as plastic pollution on the banks of the city’s Yangtze River, where she posed for a photograph a few miles away from the Wuhan wet market.

She also announced a new UK-China action plan to “boost our co-operation in the fight against the illegal ivory trade”, which she described as one of “most significant challenges of our time”.

However, May’s focus was on trade deals and no evidence has emerged that the subject of wet markets was raised. Declassified UK contacted May to ask if she had raised concerns about food hygiene at Wuhan’s wet market during her visit, but she did not respond to our questions.

Representatives from the UK food sector were also part of the delegation, such as Andrew Rooney from Rooney Fish, a shellfish business based in Northern Ireland that sells 800 tonnes of crab to China each year, who has praised the UK government for providing him with “incredible” support.

During May’s visit to Wuhan and two other Chinese cities trade deals valued at nearly £10 billion were agreed, according to a lengthy UK government press release.

Buried at the end of this announcement was a mention that Britain had persuaded China to lift “BSE restrictions by summer 2018, supporting our beef market access negotiations, valued at £250 million in the first five years.”

It is great news that the Chinese government is lifting its ban on UK beef and lamb exports. This reflects the importance of the UK’s trade mission to China earlier this year. https://t.co/c0zm81XC3b

BSE, or bovine spongiform encephalopathy, is better known as “mad cow disease”, an epidemic which has repeatedly plagued Britain’s beef industry, leading to the deaths of 178 people and the culling of millions of cattle. Researchers believe one in 2,000 British people are carriers of Creutzfeld Jakobs disease (CJD), the illness in humans caused by BSE.

British cattle are at a higher risk of BSE than Chinese cattle, according to the World Organisation for Animal Health. Therefore, China had effectively lowered its food safety standards when it allowed UK beef imports.

Four months after China agreed to end its two-decade ban on British beef imports, in June 2018, there was a BSE outbreak at a farm in Scotland that killed one cow and triggered the destruction of four more.

Despite this “worrying” development, in the words of one specialist, China continued to allow British beef imports and the Daily Mail website wrote approvingly: “British beef is back on the menu in China as it lifts a 23-year ban following outbreak of mad cow disease, signalling a £230-million boost for industry”.

Trade Secretary Liz Truss was quoted in the article saying: “Chinese diners can now enjoy the best beef in the world.”

In January 2019, the Department for International Trade published an “export guide” on China, with a picture of a crab on the front cover. It noted: “As a consequence of contaminated seafood scandals, many Chinese consumers prefer to buy live or fresh seafood instead of processed or tinned seafood.”

It added: “Such scandals have also increased demand for imported seafood that has been caught and/or prepared under stricter regulations than those found in China. A large amount of the seafood that is available in both markets and supermarkets is live, including many types of fish, crab, lobster and shrimp.”

The department explained that online shopping allowed Chinese consumers who did not have “easy access to a supermarket … or a traditional wet market” to have it “delivered quickly to their homes”.

In a section on “advice about doing business in China”, British officials explained how to get export certificates for “live fish and shellfish”.

Three months later, in April 2019, Fox secured an agreement with Beijing to become one of only two foreign countries allowed to export live langoustines to China. Fox described it as a “significant win for the UK” and “just one example of the opportunities available for British businesses looking to grow beyond Europe”. The Shellfish Association of Great Britain welcomed the development.

As well as promoting live fish exports to China, UK officials have also paved the way for pork products prized on the Chinese market, such as pig trotters. Farming Minister George Eustice hailed increasing exports as “a huge win for the UK pork industry, unlocking access to China’s lucrative market for pig trotters”.

This January, with coronavirus spreading through China, the British government told the pork industry that a “market has been identified” in China “for trimmed pig aorta and trimmed pig trachea as standalone commodities”. It proceeded to publish guidance “received via the British Embassy in Beijing” on how to export such products to China.

The global export of live fish such as lobster to China has taken a dive since the Chinese government closed the wet markets in January 2020 after the coronavirus outbreak.

Fox did not respond to questions from Declassified UK about his promotion of trade with China. DM