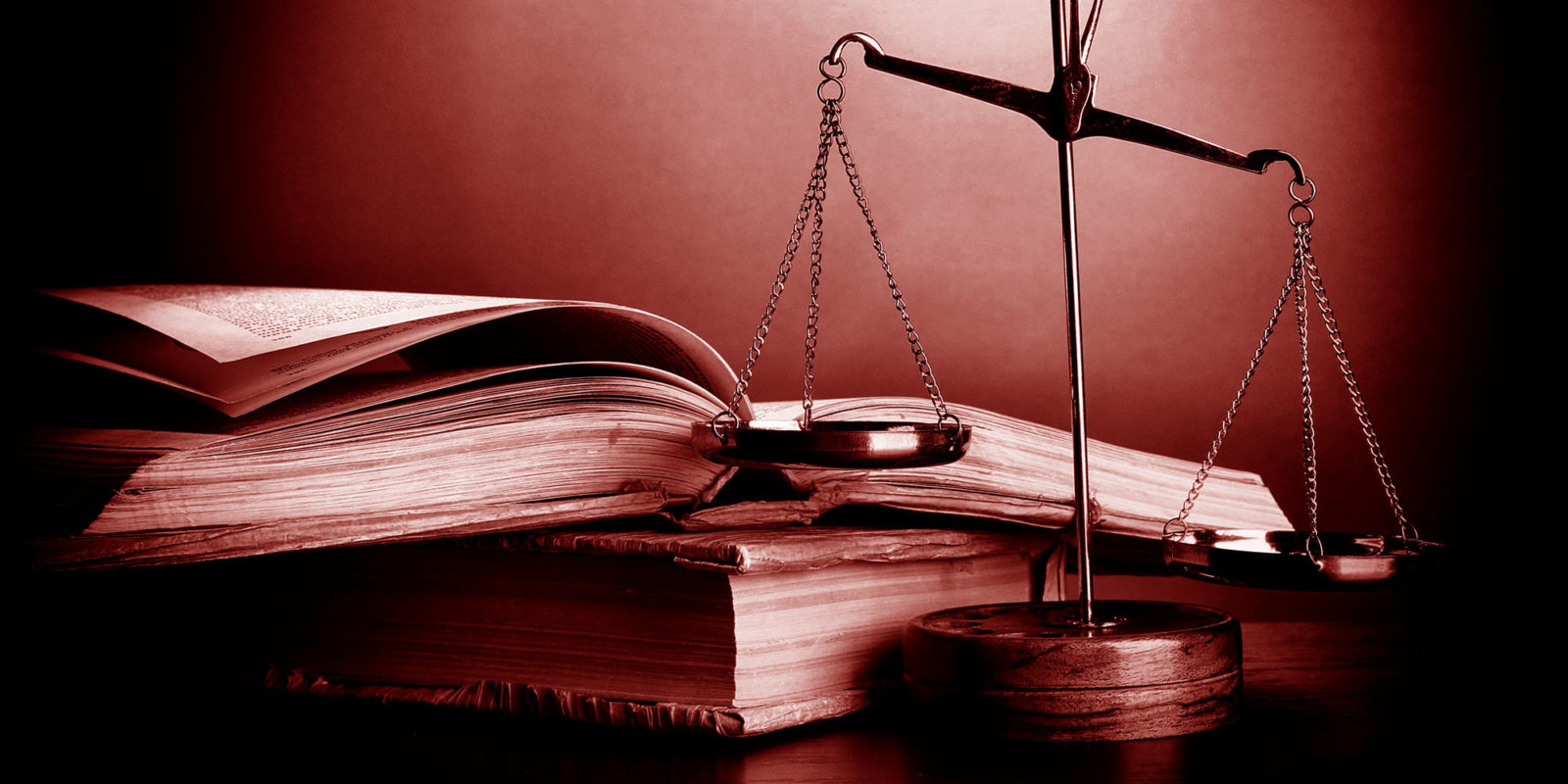 Werksmans’ decision to adopt a ‘commercially conservative’ approach to its business in the wake of the coronavirus lockdown seems to have set off tensions with the Johannesburg Society of Advocates.

Werksmans, one of the country’s top law firms, has warned advocates that it will not be able to guarantee payment for work during the Covid-19 lockdown and in the period immediately after.

In an unusual – if not unprecedented – move, the firm has urged all advocates on brief from its lawyers to seek written confirmation for work to be done during this period or to cease work on such matters.

This is likely to control costs for the firm and its own clients during the lockdown, especially for non-urgent matters.

But the Johannesburg Society of Advocates (JSA) has warned its members not to work on briefs on the terms stipulated by the firm as this would place them in breach of the Legal Practice Council’s Code of Conduct and the rules of the General Council of the Bar and the JSA.

Traditionally advocates charge by the hour or per day in court and are paid by instructing attorneys on behalf of their clients and it’s the duty of lawyers to collect fees payable to counsel – usually within 97 days.

Daily Maverick has established that Werksmans communicated its position to advocates via a letter from its chairman, David Hertz.

Sent out just over 24 hours before the country’s legal lockdown came into effect on March 26 2020, it states:

“In these uncertain economic times, Werksmans can no longer assume a primary and unconditional obligation for payment of your fees.”

In the event that written confirmation of a brief is not obtained, the advocates are warned to cease work on such matters.

“In the event an agreement is reached for work to continue it is on the express understanding that you will be paid if and when Werksmans is paid by the client concerned.

“If this is not acceptable to you, work (on such cases) must immediately cease.”

Werksmans is one of the country’s top law firms, specialising in commercial and corporate law and has been instrumental in some of the high-profile corruption and State Capture investigations involving among others, the Passenger Rail Agency of South Africa (Prasa) Transnet and VBS Mutual Bank.

In February 2020, Daily Maverick reported on the impact of non-payment of R19-million in fees due to Werksmans by Prasa.

The firm confirmed its decision about the revised payment initiative to Daily Maverick and, in a statement issued on behalf of Hertz said: “It’s no secret that we are living in very trying economic times. Covid-19 has exacerbated this.”

As a law firm, Werksmans and its staff have a duty to adopt a conservative approach to business but this will have no impact on service delivery to its clients.

As such, important matters are continuing at full steam.

“We aspire to be leaders and believe it is prudent to adopt conservative approach to commercial practices from the onset (of the pandemic).”

A senior advocate familiar with the initiative undertaken by Werksmans said this is not that unusual in view of the anticipated effects of the lockdown and in the medium term, also the pandemic.

“Everyone is prioritising. Nobody can currently work on the assumption that money will be flowing in.”

Traditionally advocates are hired and paid by instructing attorneys at law firms who then become responsible for payment of their fees.

The Johannesburg Society of Advocates, the largest in the country with around 1,300 members, in a message to its members, labeled the conditions set by Werksmans as “unilateral”.

Senior advocate Christiaan van der Merwe, chairman of the JSA’s professional and fees committee, said those conditions contravene the tenets of the referral rule that sustains the independence of counsel under the Legal Practices Act which prevents advocates from billing clients. 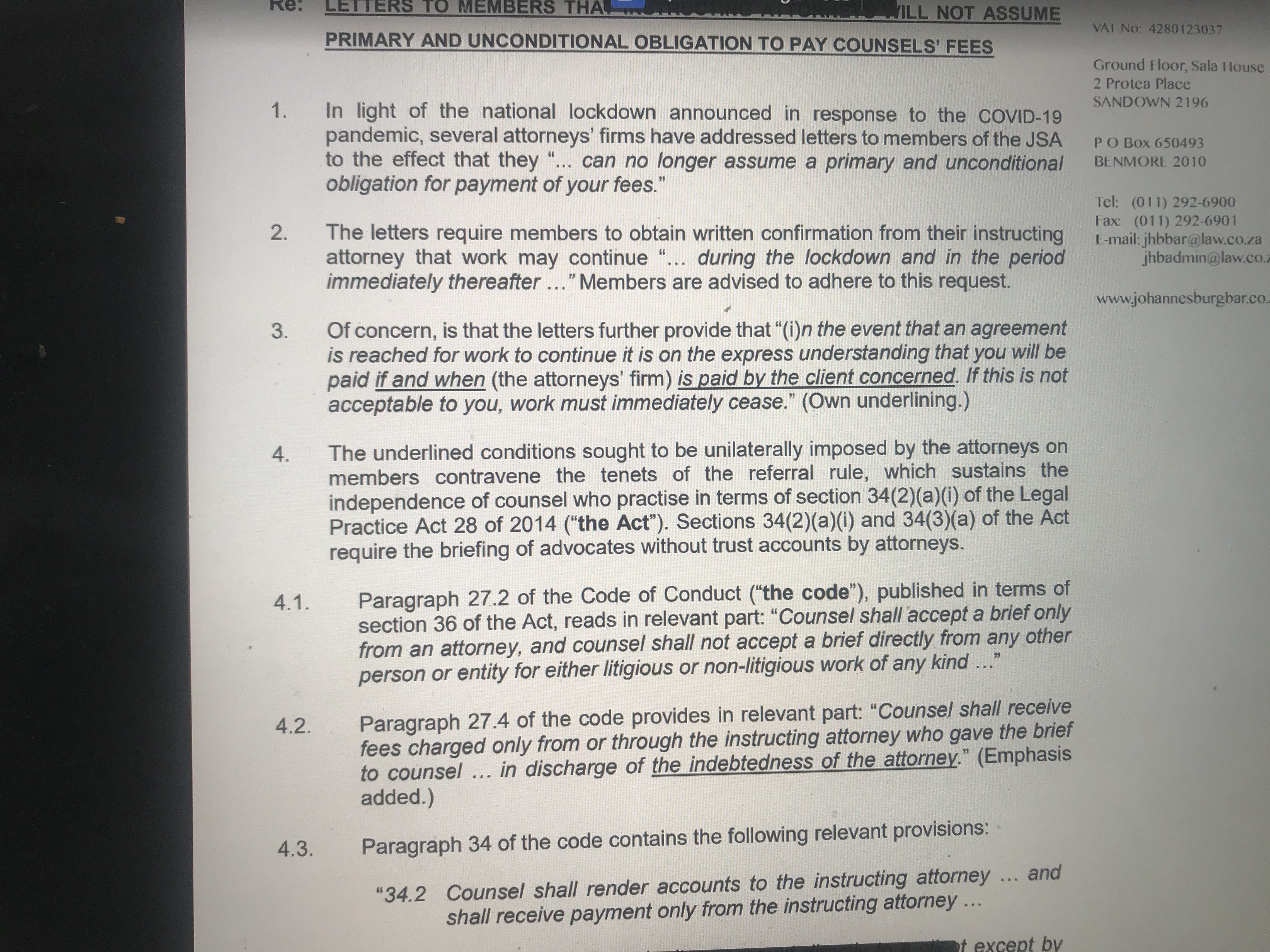 The JSA has seemingly extended its 97-day payment rule to 120 days but Van der Merwe’s note states that all fees billed by members during the lockdown months of March and April 2020 will become due at the end of the month during which the work was done and shall be paid by instructing attorneys no later than four months and seven days after the lockdown is lifted.

This directly challenges Werksmans on its plan to pay advocates only once the firm’s lawyers receive payment from their respective clients.

Chairman of the JSA, Advocate Kennedy Tsatsawane, said the standoff with Werksmans was not cause for public alarm as its advocates receive briefs from dozens of other law firms.

To date, the letter from Werksmans is the only official notice of alternative payment plans, Tstatsawane said.

“There is talk of others but the Werksmans letter is the only one that has reached us officially.”

Another senior advocate told Daily Maverick that apart from the initiative contravening the rules, some advocates are jittery about taking on work without the guarantee of payment by instructing attorneys because they would not be able to sue a client for non-payment.

With the exception of essential services, the 21-day lockdown has resulted in mass business closures that will have a significant, if not crippling effect on the South African economy.

Trade disruption has wreaked havoc with sectors such as informal trade and tourism at this early stage of the lockdown.

The decision by Werksmans is a clear sign that the firm is anticipating a knock-on effect of the financial squeeze likely to beset some of its clients over the coming months.

On 1 April 2020, a team headed by the firm’s Dr Eric Levenstein, director and head of business rescue, restructuring and insolvency unit, published an article about the likely impact of the coronavirus pandemic.

Cost Cutting likely at most other firms

It is reasonable to accept that the legal fraternity will not be spared the economic impact of Covid-19 and there is talk of cost-cutting measures at several other firms.

Norton Rose Fulbright in a written response to questions from Daily Maverick about planned pay-cuts, said it has implemented a programme aimed at the safety and “economic security” of its staff in the wake of the Coronavirus pandemic.

“To do so, we had to take into account the unprecedented situation, the uncertain economic climate and the unpredictable but inevitable major effect of Covid-19 on our business and that of our clients for an unknown period.”

Norton Rose has adopted a programme aimed at avoiding the threat of job losses with the introduction of a “deferred” or reduced distribution of director pay and a temporary salary freeze for some staff as well as a reduction in hours for some.

“This we did as a pre-emptive measure to protect jobs and mitigate the impact of the crisis and the severe global and economic downturn.”

The firm remains fully operational during this time.

While the country’s courts and legal system are deemed an essential service during the lockdown and a variety of urgent matters may be heard, regulations only permit access to the courts on a limited basis.

Other than legal representatives, only witnesses, accused persons and or those accompanying or supporting minors during proceedings are allowed in court buildings.

Since the country’s high courts were heading into recess on 30 March 2020, the lockdown affects only just a few days at the end of that period which ends on 17 April 2020. DM