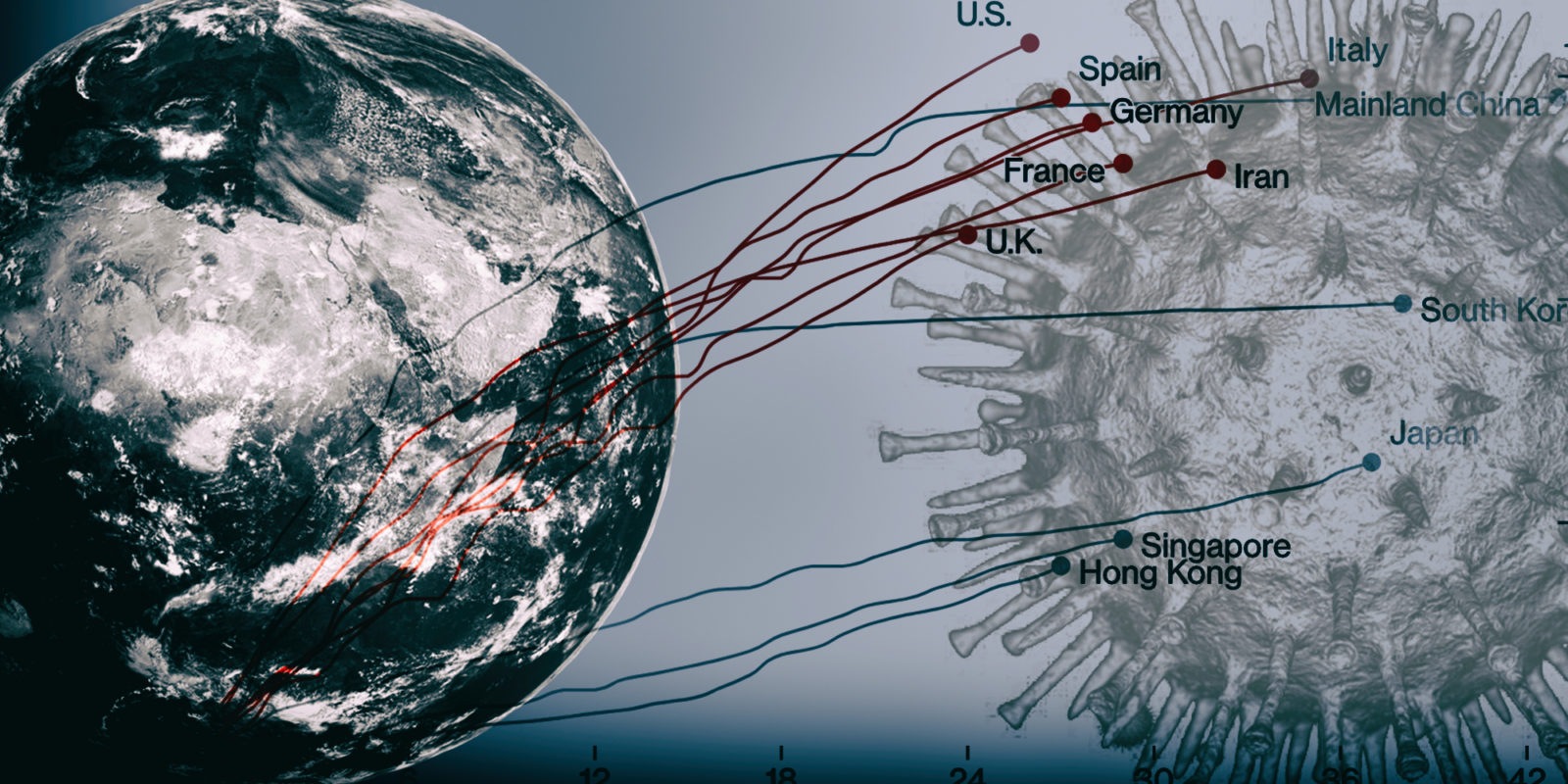 Researchers in the UK have extrapolated Covid-19 data, mainly from the Wuhan experience, to make predictions about death rates which highlight the urgency of implementing aggressive suppression measures to drastically reduce physical contact and also the rollout of extensive tracking and testing.

Researchers from the Imperial College in the United Kingdom have predicted that nearly four million South Africans could be infected and more than 15,000 could die from the coronavirus in what they stated was their “best-case” scenario (See the full report here).

But South African-based scientists have cautioned that the projection, in the college’s report last week, “The Global Impact of COVID-19 and Strategies for Mitigation and Suppression”, should be “taken with a pinch of salt” as it does not use South Africa-specific data but mostly that of the Chinese city of Wuhan where the pandemic erupted in December.

Several South African scientists are reported to be busy calculating more localised projections for the country, perhaps as early as this week, that will take into consideration more of the unique local dynamics.

The UK report by the college’s Covid-19 Response Team takes a broad-spectrum approach, projecting the impact of the pandemic on 202 countries and territories. It forecasts that globally, about seven billion people would have been infected and 40-million would have died in 2020, if states had not intervened with the lockdowns and other measures such as aggressive tracking and testing of suspected infections which increasing numbers of countries are taking.

The scientists are adamant that only aggressive suppression measures to drastically reduce social contact and also extensive tracking and testing — and not mere mitigation — will substantially reduce death rates.

The report says mitigation strategies, focusing on reducing the transmission by cutting social contacts among the wider population by 40% and among the more vulnerable elderly population by 60%, could reduce the 40 million death rate by half.

“Our analysis therefore suggests that healthcare demand can only be kept within manageable levels through the rapid adoption of public health measures (including testing and isolation of cases and wider social distancing measures) to suppress transmission, similar to those being adopted in many countries at the current time,” the report says.

If such a suppression strategy were implemented early in the pandemic — when the death rate was still 0.2 deaths per 100,000 population per week — and sustained, then a substantial 38.7 million lives could be saved.

If it is only initiated later, when death numbers are already higher (1.6 deaths per 100,000 population per week) then 30.7 million lives could be saved, it says. The longer the delay in implementing strategies to suppress transmission, the greater will be the number of deaths.

The report, in its own words, “clearly demonstrates the extent to which rapid, decisive and collective action can prevent billions of infections and save millions of lives globally.” An earlier report by the same team which focused only on the US and UK is reputed to have persuaded the British government to introduce much stronger social control measures against the coronavirus.

The report also projects various scenarios for individual countries, depending on how they respond to the pandemic.

In South Africa, in a worst-case scenario where no measures had been taken to mitigate or suppress the virus, 53,966,779 of this country’s estimated 2020 population of 59,308,690 would have been infected and 221,280 would have died, the Imperial College scientists forecast.

Various mitigation strategies involving different levels of social distancing, including enhanced social distancing for the elderly — who are most vulnerable to the virus — would bring the infection and death rates in the country down to 31 million and 125,010 respectively.

But the report says that, as in other countries, only more aggressive “suppression” strategies would have a real impact on the pandemic in South Africa. The most aggressive such strategy which it models is where states impose measures to reduce social contact by at least 75%, no later than when the death rates in their countries are still no more than 0.2 deaths per 100,000 of population per week.

Though it is probably not possible to match any of the report’s scenarios exactly with the South African government’s strategy, Pretoria’s approach does seem closest to this most aggressive strategy which the report models.

President Ramaphosa enforced a lockdown on Thursday 26 March at midnight, confining all but essential workers to their homes for 21 days, at about the same time as the first death from the virus was reported.

But even in this best-case scenario for South Africa, where such strong suppression measures are implemented, 3,961,213 people would be infected and 15,438 would die, the report forecasts. An estimated 106,575 infected persons would be hospitalised, with a peak hospital bed demand of 30,600. Of these, 20,263 would become critically ill, creating a peak critical care demand of 5,362 critical care beds.

Professor Tom Moultrie, director of the Centre for Actuarial Research at the University of Cape Town, recently tweeted about this report that:

“This is not a SA-specific model. It’s got all the Wuhan parameters in it.”

And Professor Rob Dorrington, emeritus professor at the same centre, also cautioned that, as the authors of the report had themselves acknowledged, their models were not based on any information about the countries concerned, other than the size and age distribution of the populations.

“Thus, for South Africa, importantly, the estimates do not take into account differences in comorbidities (in particular HIV/AIDS and TB, not to mention hypertension and diabetes), or in the socio-economic conditions (particularly as they might affect the spread and management of the epidemic) from the data on which their model was based.”

The authors of the report have themselves frankly acknowledged that many of their assumptions will probably not apply in all countries, in part because they are based on the experiences of China and high-income countries.

For sub-Saharan Africa as a whole, the report forecasts that if governments had done nothing, more than one billion people would have been infected and more than 2.4 million would have died. If all governments introduce suppression measures only when the death rate has reached 1.6 people per 100,000 population per week in their country, the number of infections could be reduced to 455 million and the deaths to 1.2 million.

If such suppression measures are introduced earlier, when the death rate is still 0.2 deaths per 100,000 population per week, the infection number could be further reduced to 110 million and deaths to 298,000. This is a bit better than the forecast for South Asia, with 111.7 million infections and 475,000 deaths if the same more aggressive suppression strategy is adopted.

Sub-Saharan Africa’s death rate in this aggressive suppression scenario would be 0.27% of infections which is the best of all the regions of the world; the rest range from a high of 0.518% for North America; to 0.47% for East Asia and the Pacific; 0.45% for Europe and Central Asia; 0.425% for South Asia; 0.37% for the Middle East and North Africa; and then to 0.348% for Latin America and the Caribbean.

Globally, the infection number for this strategy would be 470 million, with 1.9 million deaths — a death rate of 0.404%.

The relatively low infection and death rates in Africa projected in the report may seem surprising, especially as some analysts fear the impact of the virus could be larger on this continent for various reasons, including poor health systems, congested living conditions and immune systems weakened by other diseases such as HIV/AIDS. The report explains its lower projections for sub-Saharan Africa are largely based on the continent having younger populations, even though it also says in lower-income countries there is usually greater social interaction between age groups.

“Despite higher rates of contact across older age-groups, we predict a lower incidence of severe disease, hospitalisation and deaths in lower-income settings. This is driven by the younger average age of these populations. It is important to note, however, that these estimates assume no substantive difference in general health/co-morbidity prevalence between Chinese and other populations.”

The report also acknowledges that other large uncertainties remain in determining the severity of Covid-19 infection in different regions and countries. It notes that clear risk factors include age, with older people more likely to require hospitalisation and to subsequently die as a result of infection, and underlying comorbidities — including hypertension, diabetes and coronary heart disease, which could exacerbate symptoms.

It adds: “The age profile and the distribution of the relevant comorbidities are likely to vary substantially by country, region and economic status, as will age-specific contact patterns and social mixing.”

It also notes that its predictions of mortality and healthcare demand are largely based on the experience of China and high-income countries and so might not be the same elsewhere. For instance, because young people bear the greatest burden of other infectious diseases in lower-income countries, they might prove to be more susceptible to Covid-19 than the youth in China or high-income countries.

“Variation in these factors between countries will have material consequences for transmission and the associated burden of disease by modifying the extent to which infection spreads to the older, more vulnerable members of society.”

The report suggests the suppression measures it calls for will have to be maintained for 250 days to achieve the predicted reduction in infections and deaths. It says “suppression strategies will need to be maintained in some manner until vaccines or effective treatments become available to avoid the risk of later epidemics”. Most scientists seem to be predicting that developing a vaccine will take at least 12 more months. DM