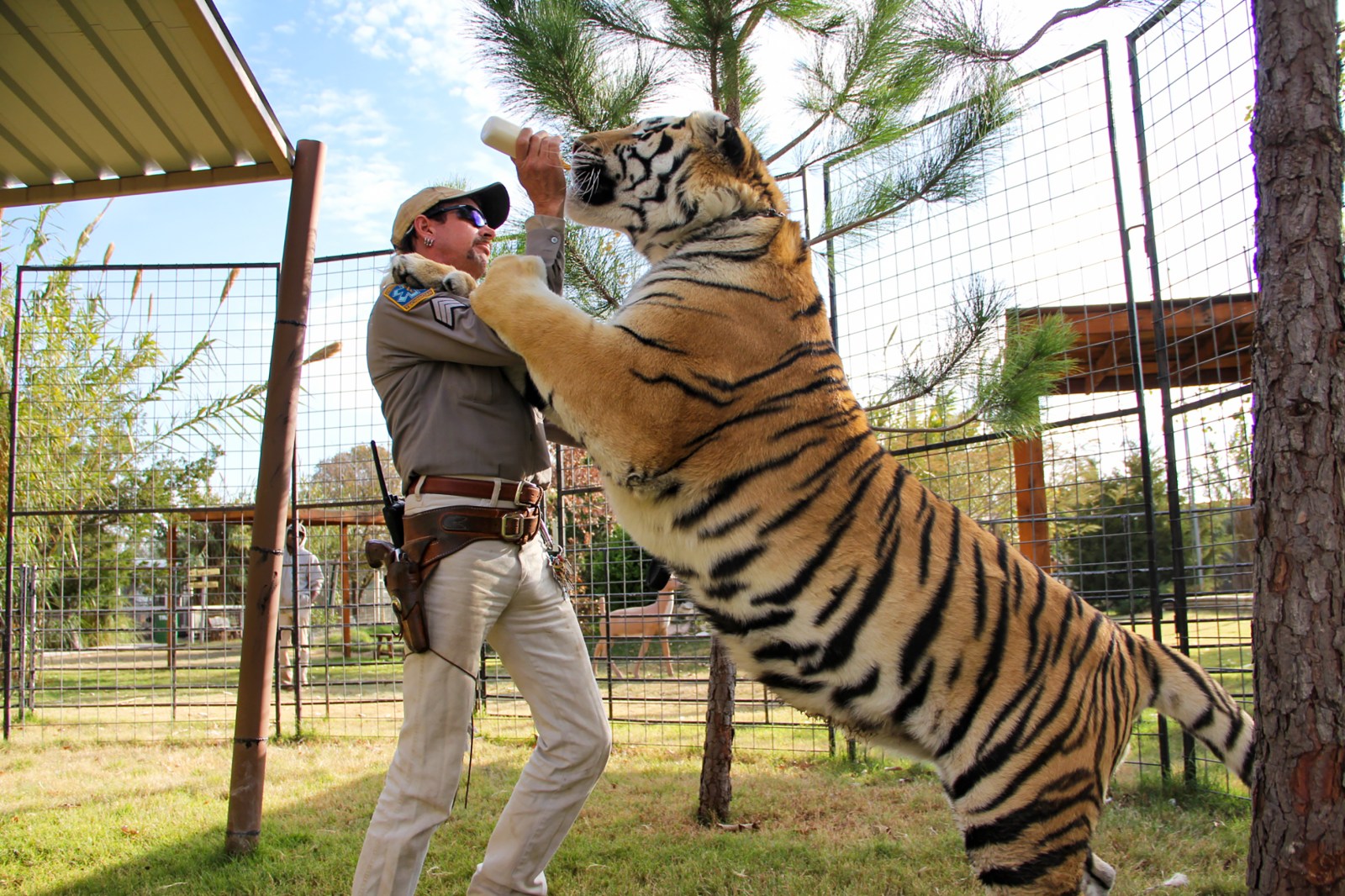 With the world still in lockdown, our personal worlds are shrinking to the size of our screens, and the hottest show on Netflix has become a big deal. This weekend, dive into ‘Tiger King’, but don’t stop there – dive as deep as you need to understand the messages within it.

Experts believe that in 1918, a man with the flu and a chicken with bird flu, came into contact with the same pig. The bird flu virus would have been fatal to humans but the two viruses could not infect each other’s host species. They could however, both be transmitted to pigs, and inside the infected pig, they fused to create a new virus that lead to the Spanish Flu. The pandemic killed over 50 million people.

On the 7th of February, Daily Maverick broke the story that the current Coronavirus pandemic was likely created through a similar interaction between a bat and pangolin, the most trafficked mammal on the planet. Somewhere in a wet market in Wuhan, a variety of creatures were crammed together in a confined space, some already corpses, others still breathing – kept alive for as long as possible before being consumed. It would have been under these conditions that the coronavirus cocktail could have been brewed.

Covid-19 does not care whether you are an animal trafficker or conservationist – a Coronavirus particle is roughly 14 million times smaller than a person, it has no emotions, intentions, or sense of justice.

It seems fitting that the new true crime documentary series Tiger King is now the most watched show on Netflix. The series infiltrates the insane hidden world of animal trafficking, focusing particularly on the long-running stranger-than-fiction feuds between the outlandish big players of the big-cat industry in the United States. There are roughly twice as many tigers in captivity in the US alone as there are tigers living in the wild. Wildlife trafficking concerns most governments only in as much as it can endanger people and financial prospects. The pain and existential threat which it poses to animals seems only but a peripheral concern.

In Tiger King, each of the colourful personalities we meet claims to love big cats, yet they are the very foundation of the global big-cat trafficking industry which threatens to wipe them out. They are personifications of hypocrisy who exalt these majestic beasts while sitting on their overfed bellies and feeding them milk through a baby bottle. They are superlative examples of the rejection of our own identity as fellow animals.

The centerpiece of this controversial community is the Tiger-King himself – a gun-toting, mullet-sporting, meth-smoking redneck who goes by the name of Joe Exotic. He is described in the show as “a mythical character living out in the middle of bum-fuck Oklahoma”. The self-obsession of this Napoleonesque egomaniac is part of the reason that Tiger King makes for such compelling television – someone like that, so desperate for attention, is liable to unashamedly film everything they do with the determined self assurance that the attention it brings them is admiration rather than repulsion. There is so much jaw-dropping footage on this guy that it seems to have been a struggle to cram it all into the series.

Joe Exotic is only one of the monsters in the big-cat menagerie, which includes a polygamist cult-leader, a drug lord, a strip-club owner, and a con artist. There is a historic connection between the trading of wild animals and organized crime and it’s no coincidence that big cat owners are typically flamboyant power-hungry men. They get a sick sort of high from the sense that they have subjugated a powerful creature.

In Tiger King, Carole Baskin, owner of Big Cat Rescue says, “they want to use those cats to elevate their status”. Baskin is the sworn enemy of pretty much everyone else in the industry. But the hate directed towards her is not only due to her preaching conservation, but also because of the hypocrisy of her doing so. While Baskin has devoted her life to thwarting practices like cub-petting and breeding, she herself started in those businesses; she represents an important question which Tiger King poses to its audience: if you deplore the likes of Joe Exotic, how can you approve of keeping wild animals in captivity at all? Is the difference between Joe Exotic and his arch-nemesis Carole Baskin really that big?

Apart from the very beginning and the very end, Tiger King does not feel like it’s really about tigers. Tigers are merely the currency of sin in a suspenseful crime thriller. You are drawn in by the mystique of the cats and dropped behind the curtain of misogyny and madness that shrouds their caged lives. Just as always with high rolling psychos, everything comes crashing down and it all ends in fire. This story has ignited global rage and brought big-cat conservation into the public eye, but focusing so much on the story rather than the tigers themselves feels like a missed opportunity to not only enrage people, but educate them.

Tiger King doesn’t overtly punt big-cat conservation – it gives you the numbers and tells you the story, and the facts speak for themselves. At one point in the series Tim Stark, one of the heavy weight traffickers, argues that breeding captive tigers in the United States is exactly what is needed to get tigers off the endangered list. This is not true, although the show never explains why. The tiger trafficking industry is characterized by gross levels of inbreeding; white tigers for example, suffer from an array of genetic disorders, which, if released into the wild could be the nail in the coffin of the species.

Tiger King as a series is impeccable. The content is topical and more ridiculous than your wildest dreams, the footage is excellent and the production value is top notch. As an exposé on wildlife trafficking however, there could be so much more to be said. It is a must-watch but it is also a must-understand. After being enthralled by the crass theatrics of the morally bereft psychos who trade in big cats, you owe it to the animals to clue yourself up on why zoos and sanctuaries are not as much of an ethical grey area as we sometimes like to think they are. DM/ ML