See Naples and die: Survival in the time of cholera 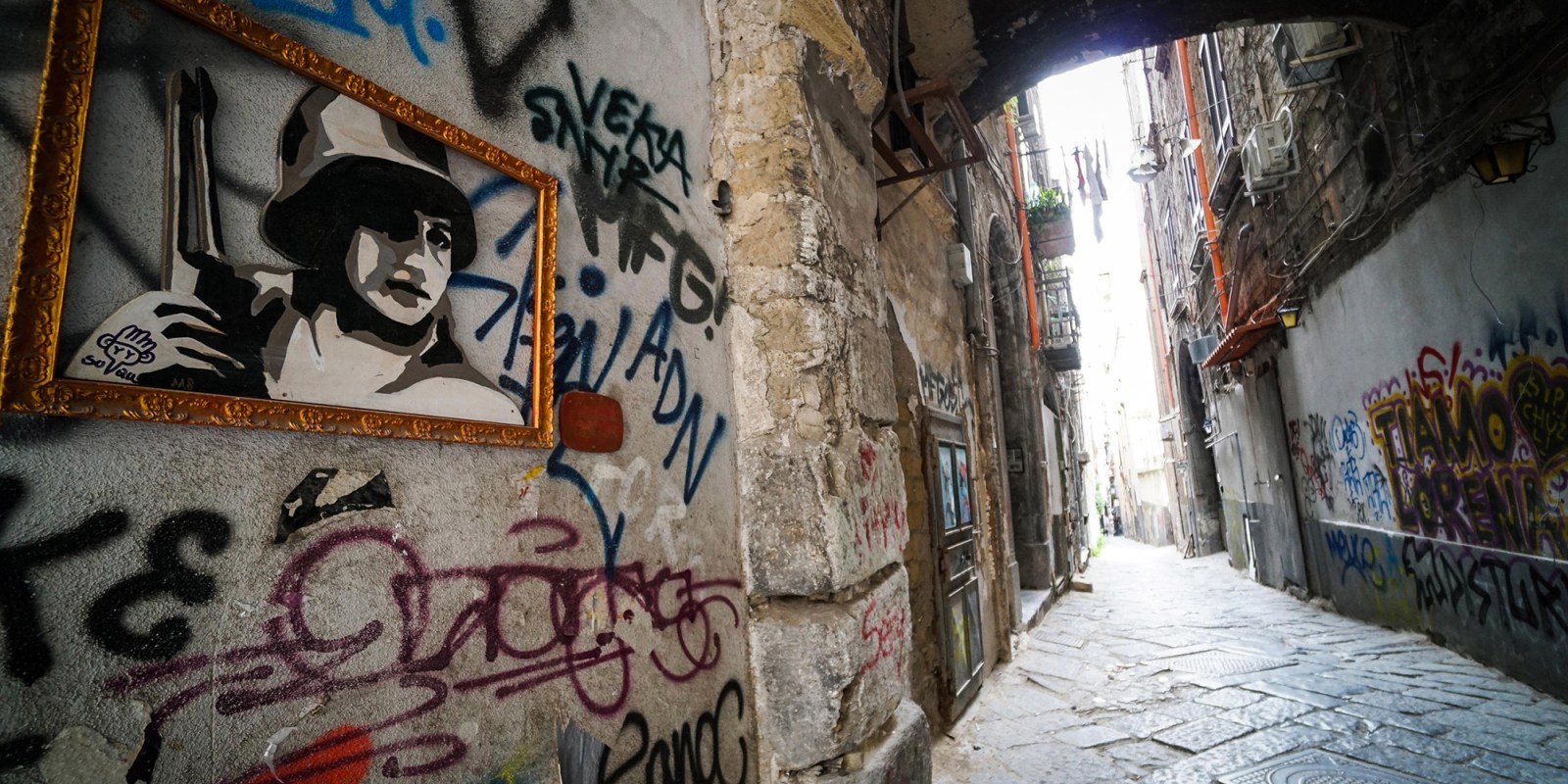 An empty street in Naples on 26 March 2020 during the Coronavirus emergency. (Photo: EPA-EFE / Cesare Abbate)

The Covid-19 pandemic sweeping the globe stirs memories of an earlier pestilence, the Naples cholera epidemic of 1973.

Not long after leaving South Africa, during a hot, sweaty August 1973, I went to live in Naples. Within a fortnight, a virulent epidemic of cholera broke out, causing panic in the overcrowded backstreets where I had rented a cramped garret. It wasn’t long before I too began to experience all the dreaded symptoms of that potentially fatal disease, which thrives in unsanitary conditions.

My new home was a converted storage space between the third and fourth floors of a crumbling ancient palazzo in the cobbled, overcrowded backstreets. The surrounding labyrinth of narrow alleyways is still known as the Spanish Quarter, from the time when Spanish overlords billeted their troops there in the 16th century. This poor neighbourhood, where families sometimes lived 10 to a room, persisted as a stronghold for the two professions forever drawn by the military: prostitutes and criminals. Immediately above me was an apartment which operated as a discreet brothel, housing five friendly middle-aged women.

Outside in via Carlo de Cesare, housewives sat on upturned wooden boxes selling contraband American cigarettes, street kids played football, dodging the hooting Fiats, while elderly couples sat in open doorways in their nightgowns, playing cards or eating meals in full public view. At night it felt as though one had stepped back into the Middle Ages. Rats scampered from piles of rubbish; occasionally slops were tipped from a balcony into the street below. It was a riotous, noisy, stubborn society, as though the teeming slums had turned their backs on modernity.

The first cases of cholera were reported on 20 August but, like some recent lackadaisical responses to the coronavirus pandemic, this was not officially acknowledged till 28 August, thus losing valuable time in attempts to halt the spread of the outbreak, or even to be able to warn people as to the likely cause.

Accusing fingers soon pointed to a Neapolitan speciality: cozze, or mussels, from the Bay of Naples. That delay in warning inhabitants about eating mussels almost certainly contributed to my infection, as in the first days of my arrival I had eaten copious platefuls of spaghetti alle cozze.

The problem was that mussels, like oysters, are bivalves, so serve as a form of filter, absorbing toxins from the surrounding sea. But, while performing a mild cleansing service, mussels also retain potentially harmful contaminants. In Naples, they were often known as “scatole di merda”, or shit boxes.

The Bay of Naples is supremely scenic, with Mount Vesuvius rising imperiously on the opposite shore. But its waters are notoriously polluted. In the first century BC, the genial poet Horace enjoyed holidaying at the Roman Empire’s most fashionable resort near Naples, where his friend Virgil had lived for many years. But Horace dryly lamented that the Bay of Naples was so full of rubbish that even the fish complained. That was still true.

The first response to the announcement of an outbreak of cholera was fear. People living in the hugely over-populated bassi, or slums, were the most at risk, with the elderly and children particularly vulnerable. It was in these demented backstreets that the scourge began to spread.

TV and radio broadcast emergency warnings. Army trucks rumbled by, spraying the cobbled alleys with disinfectant – usually with a small army of urchins racing after them, enjoying the shower and the drama.

Soon there were deaths. Panic spread. Then I felt distinctly ill. After a couple of days, I made my way to the British Council library and looked up the symptoms in the Encyclopedia Britannica: diarrhoea, vomiting, dehydration, total exhaustion. Yup, yup, yup; I had all the symptoms.

After another day of lying listlessly in bed, I joined a long, disordered queue of agitated Neapolitans waiting to see an army doctor. After describing my symptoms to a young officer, groggy with fatigue, he asked how long I had been feeling so ill. Discovering that it had been several days, he sighed, “You’re young. You’ll live”, adding cryptically “Drink beer.”

So, in the shabby grandeur of the Galleria Umberto, the cavernous glass-domed nineteenth-century arcade, I dutifully sipped beer during the humid evenings of early September. The Roman poet Virgil, in the Aeneid, had located the entrance to the underworld at Lake Avernus, a volcanic crater lake just west of the city (“Perdition’s dank door remains open day and night”). Nearly 2,000 years later, Naples seemed like a spectral netherworld.

It is a famously superstitious city, with adverts on posters and in newspapers for astrologers, mystics and fortune-tellers. As they had done for centuries, Neapolitans now looked anxiously to the city’s patron saint, Gennaro, or St Januarius. Gennaro was beheaded in the fourth century and what is reputed to be his clotted blood is preserved in a phial at the cathedral. On three festivals every year the phial is taken out, most importantly on 19 September, the anniversary of Gennaro’s martyrdom. At these festivals, if the congealed substance liquefies quickly, it portends a propitious year for the city. But if what is said to be the saint’s blood remains clotted, disaster is feared, even calamity.

“This year all our lives and future depend on Gennaro,” Eleanora, the elderly caretaker who guarded our crumbling tenement, informed me grimly.

September 19 dawned, sweltering and sticky. Feeling slightly stronger, I made my way to the cathedral, which was already packed. Hundreds more anxious believers thronged surrounding streets. There was only one question for the anxious multitudes: would the saint intercede and halt the deadly epidemic?

Inside the cathedral it was bedlam. Given preference in the front pews, the “widows” of St Gennaro, elderly women dressed in black, wailed and ululated for the saint to protect their city. The archbishop paraded the phial, set in an elaborate silver reliquary. As the archbishop intoned his prayers and the “widows” clutched fervently at the phial, I watched carefully for any sleight of hand. Voices, weeping and prayers rose to a crescendo, impassioned and desperate. As the minutes passed, tension soared. Suddenly a triumphant cry went up and was echoed from row to row, a ripple spreading out from the cathedral till it was taken up by the crowds outside: “It’s done … it’s done!”

The reputed blood can take hours, even days, to liquefy – if at all. That year it took barely an hour. When I returned home, Eleanora the caretaker was ecstatic. “Our city is saved!” she exulted, eyes shining with gratitude.

By the time the plague had passed, it was reported to have claimed 27 lives. Official figures later scaled that down, though recently one of Italy’s most distinguished historians put the cholera deaths at 24.

As for those damned cozze, accusing fingers subsequently pointed at an allegedly suspect batch of Tunisian mussels. Which goes to show, of course, that governments dissemble and, chauvinistically, try to shift the blame. The dead, however, remain dead. DM/MC

Bryan Rostron has lived and worked as a journalist in South Africa, Italy, New York and London. He has written for The New York Times, the London Sunday Times, The Guardian, The Spectator and was a correspondent for New Statesman. He is the author of Robert McBride: The Struggle Continues and five previous books, including the novels My Shadow and Black Petals. He lives in Cape Town.