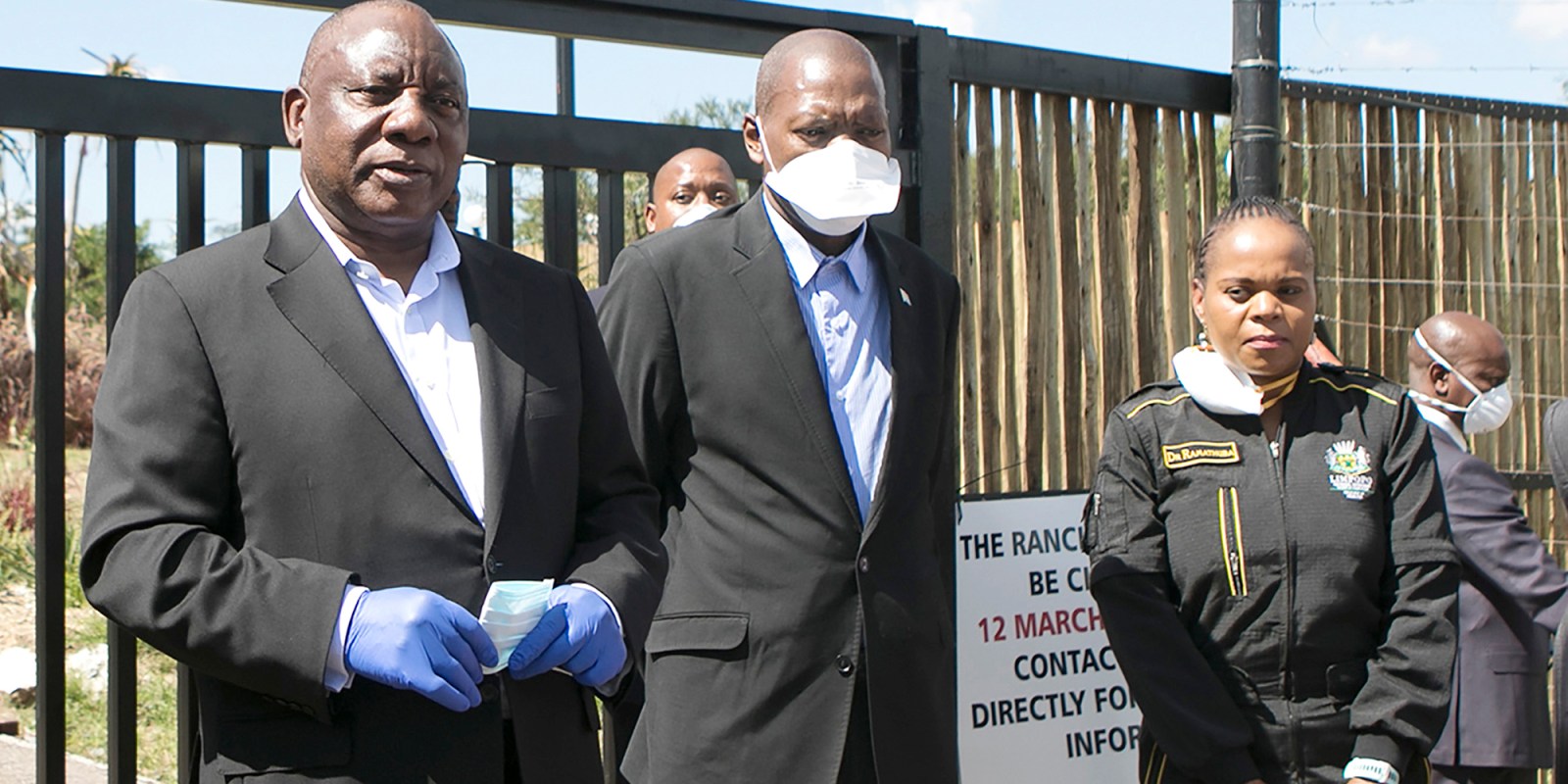 After testing positive for Covid-19, two doctors followed protocols and self-isolated. But a contingent of men in masks, supported by police, arrived with a court order and carted them off to a hospital isolation ward — on the orders of the Health MEC.

Two doctors with Covid-19 were forcibly quarantined in a Limpopo hospital on Thursday 2 April on the orders of provincial health MEC Phophi Ramathuba, who blames them for bringing the virus into her province.

Dr Claire Olivier and Dr Taryn Williams were in self-quarantine at their home in Modimolle after testing positive for the virus last weekend when Emergency Medical Services (EMS) officers and police arrived with a court order.

The court order, issued in favour of MEC Dr Phophi Ramathuba, was executed by an EMS officer in a full hazmat suit, a district health official and three police officers, while members of the SPCA were on hand to take Olivier’s three dogs away.

“Since testing positive for Covid-19, we have been self-isolating at home and haven’t had any visitors. But now we have been locked up in a hospital ward like criminals,” said an upset and tearful Olivier from Modimolle’s Multi-Drug Resistant TB Hospital, where the two have been confined.

The doctors work at Mmamethlake Hospital in Mpumalanga and neither has travelled internationally. Williams visited Johannesburg in mid-March.

“No one can say how we picked up the virus. We have been seeing patients who have some of the symptoms of Covid-19 but we have been unable to test them because of a directive by our hospital and the NICD that we should only test those with a history of international travel or contact, as the tests are in short supply,” said Olivier.

“Taryn had a dry cough but no other symptoms and no history of travel, so she also did not fulfill the criteria for getting a test at the hospital. But she was worried about the possibility of infecting patients so she got tested over the weekend at a private laboratory. Her test confirmed she was positive on 29 March and I then had a test and was also confirmed positive on 30th,” added Olivier.

The doctors, who share a house, went into immediate self-isolation and informed their hospital. On Tuesday, Limpopo EMS officers visited them to conduct medical tests, confirming that they were asymptomatic and needed to self-quarantine.

However, the following day the EMS arrived again and informed them that they had to be quarantined in a hospital. When they phoned MEC Ramathuba to get clarification, she blamed them for “bringing the virus into my province to infect my rural people”, according to a recording that Daily Maverick has heard.

Popo Maja, the national Department of Health’s director of communication, confirmed that self-quarantine is the national protocol.

“Forced quarantine is only for those unable or unwilling to self-quarantine. China overcame the virus by self-quarantine,” said Maja, who added that he would take up the doctors’ plight with Health Minister Zweli Mkhize.

The SA Medical Association (SAMA) condemned the forced quarantine of their members as a “shocking violation of their human rights” and is working with lawyer William Oosthuizen to get the court order reversed.

“This is a shocking abuse of the limited resources of the health department and of the human rights of the doctors,” said Dr Mark Human, chairperson of SAMA’s human rights, law and ethics committee.

“The doctors have acted very responsibly and followed all the rules and guidelines.”

Human added that the two women could have been infected at their hospital and the incident might indicate there are many Covid-19 infections in the country that are not being picked up because of the current strict testing guidelines.

Meanwhile, SAMA chairperson Angelique Coetzee has written to Ramathuba, warning that moving the doctors “may further aggravate their conditions while they are still clinically stable”.

“The court action you embarked on to force these doctors into a provincial facility, and the manner in which these doctors have been treated by yourself and certain healthcare staff of the province, is most unsettling,” wrote Coetzee.

“According to the doctors … you informed them that they had brought the virus to the people of Limpopo and that they should have stayed where they were at the time, despite their explanation that they work in Mpumalanga and live in Limpopo.”

Ramathuba’s spokesperson, Thilivhali Muavha, acknowledged receipt of questions relating to the doctors and said the department would respond in due course, but needed time to consult as the matter “is a very sensitive issue” and that the MEC “is having a Skype call with the Minister [of Health]”.

A statement issued later by Ramathuba’s spokesperson, Thilivhali Muavha, described SAMA’s letter as “malicious” and said that the province had taken a decision to quarantine and isolate “all who need to without fear, favour or prejudice”.

“The department announced last week that due to non-compliance to the rules of self-isolation by some patients of COVID-19, all those who test positive will be taken into its isolation site for the prescribed period,” according to the statement.

It claimed that the doctors had “bluntly refused” to go into isolation, and that they had “released their domestic worker back to the informal settlement where she stays with a nine-year-old child and told her to self-quarantine whereby they know very well that social circumstances would not allow that.”

However, Olivier disputed that she and Williams had been told to go into isolation prior to Ramathuba getting a court order.

“We also gave the health department the contact details of our domestic worker, they have been in touch with her and she has tested negative,” said Olivier. DM/MC