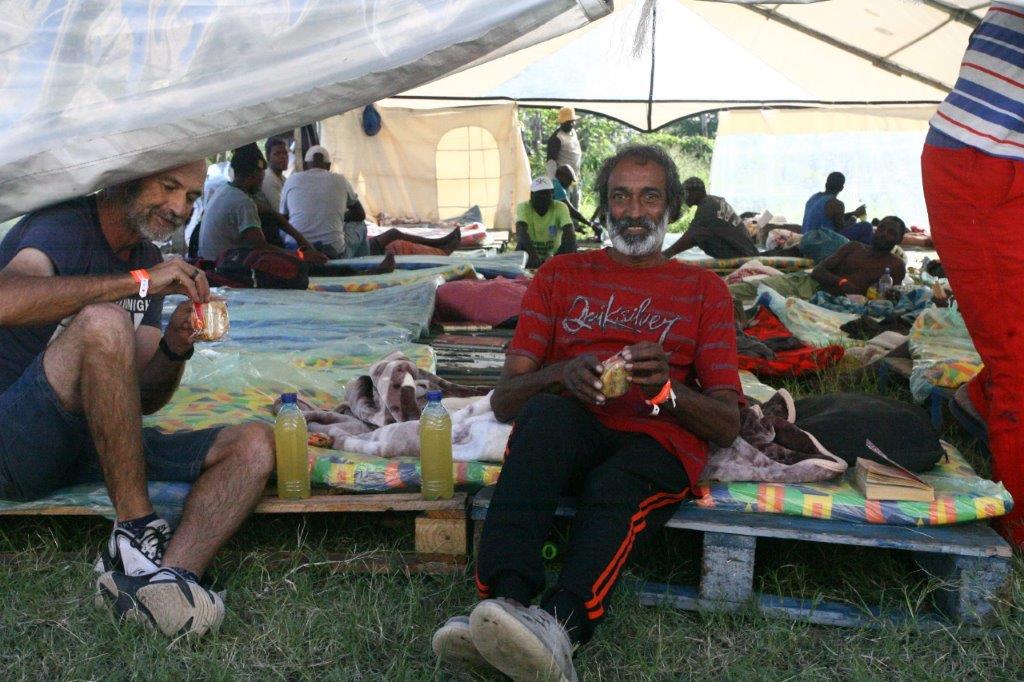 Pieter Venter and Alvin Hogia have been allocated tent space at an open field behind the Durban Holocaust and Genocide Centre, along with other homeless residents. Photo: Jonathan Erasmus

eThekwini mayor Mxolisi Kaunda made a statement on Thursday about the city’s homeless that a year ago would have elicited scoffing and eye rolls from some informed quarters.

“They are really enjoying their stay in those facilities,” he told a media briefing at the notorious Glebelands Hostel in uMlazi.

Kaunda was answering questions about how the city was dealing with its estimated 4000+ homeless residents, and shack dwellers, and hostel residents, during the country’s 21-day Covid-19 lockdown.

The “facilities” he referenced are small, tented communities set up in open spaces in and around the city specifically for outies. Others are rooms in municipal properties that already house the homeless, such as the Strollers building.

Daily Maverick readers will remember Strollers as being one of the buildings that houses former residents of the now defunct The Ark shelter. A former Ark resident who has been a long-time Strollers’ resident said the new homeless had been placed in the lower levels of the building. “We haven’t had any problems, yet.”

Residents living rough were rounded up by authorities and deposited at the camps, where they are provided with meals, clean mattresses and blankets, potable water, toilets and showers.

The addicts are separated from the non-users, and in the case of sleeping arrangements, men and women are tented separately.

eThekwini’s spokesperson, Msawakhe Mayisela, told Daily Maverick that the city had been able to accommodate more than 1,500 in the CBD “but this number is due to increase as the sites are still being established in secondary towns such as Pinetown, Isipingo, Tongaat and Phoenix”.

The city had initially planned to accommodate 1,000 people, he said, but the numbers increased exponentially on the second day of screening. Nine emergency shelters were currently operational throughout the Durban CBD and Pinetown, he said.

“This expansion resulted in food shortages, however the NGOs in the city and business community came forward to assist and currently all homeless people are receiving at least three meals per day.

“Various departments, from both municipal and provincial, and NGOs provided health screening and social work services to all the homeless who have been admitted to the shelters so as to ensure that all medical needs are attended to, this has resulted in the deployment of nurses in all the shelters to further screen and treat those who require medical support.

“Some who have defaulted on treatment have been identified and will be reintroduced while they are still in shelters. Some of the challenges experienced was dealing with those who had drug withdrawal symptoms.

“This process has assisted some who were on the streets to consider reunification with their families and a process is under way to prepare families and the homeless for their return after the lockdown.”

One of the nine camps Mayisela is referring to has been erected in an open field behind the Durban Holocaust and Genocide Centre, a few hundred metres from the beachfront.

The residents of “Jewish Club 1” as they call it, are separated from “Jewish Club 2” by a small embankment and mostly collapsed fence.

“Jewish Club 2 is where the addicts are; by us in Jewish Club 1, we don’t use. They sometimes try to come over to steal our stuff to sell for drugs,” a camp resident told Daily Maverick.

To be sure, this is in no way “nice” accommodation at any level. Clean, new, but thin mattresses have been placed on wooden pallets. The tent has no ground cover, and long grass reaches up through the makeshift bases.

An informal game of cricket was taking place when Daily Maverick visited Jewish Club 1. Two nurses were stationed inside the premises under a small gazebo. SAPS and Metro police provided security.

Matita works for the Denis Hurley Centre, an inter-faith mission in Durban’s inner city that runs programmes for the homeless, among other intervention projects.

Residents are allowed to leave the camp – “it’s not a prison”, said Matita.

“If you want to go out you are not allowed to come back; unless you have an appointment with a doctor, you need to collect a Sassa grant or something like that, then we will make arrangements for you,” he said.

All of the residents at the camps peppered throughout the city wear coloured wristbands identifying which sites they are from. Wristbands are not allocated unless Covid-19 testing has been done.

The campers have all been tested for the virus, and, according to mayor Kaunda, all have thus far tested negative.

Tests are, however, done regularly.

The addicts in Jewish Club 2 would soon be transported to the outside field of the Moses Mabhida stadium, said Matita. “We have problems with some of the residents at Jewish Club 2. They vomit, they have stomach cramps because they are not getting a fix.”

The non-addicted at the stadium camp would then take up residence at Jewish Club 2.

The stadium is about four kilometres from the “Jewish Club” facilities, but security here is much tighter, even though there is a massive tear in the fencing through which a grown man could stride.

Daily Maverick was denied entry by police, of which there was a large contingent.

Despite the SAPS presence, over two consecutive days we saw three different male campers scaling the southern side of the fence and walking towards the trains situated behind the stadium – an area known as a place to score drugs.

Matita said he was not sure what would happen to the city’s homeless once lockdown ended. “We are still in negotiations with [eThekwini deputy mayor] Belinda Scott.”

The homeless – particularly the drug addicted and unruly – have been a headache for the Durban council as it tries to punt itself as a preferred tourism and investment destination.

The deputy mayor of each administration is responsible for trying to solve the headache.

Matita had nothing but praise for Scott. “Since we have Belinda Scott as a deputy mayor, things are happening. That is a blessing for homeless people, because Belinda is taking homeless people very seriously.”

Scott – KwaZulu-Natal’s former finance MEC – was deployed as deputy mayor, with Kaunda as mayor, after the ANC axed corruption-accused former mayor Zandile Gumede and some of her cohorts.

Alvin Hogia, 48, and Pieter Venter, 52, were eager to speak to Daily Maverick as we made our way around the camp. With broad grins, they introduced themselves as having been Jewish Club 1 residents for five days.

“I have been working but I was just caught up in this sh*t,” Venter said.

The police had been “good” when they collected the men and took them for testing at the Durban Exhibition Centre area and then to the camp, they said.

“We don’t have masks or gloves, but they have given us mattresses, blankets, and we get food four times a day,” emphasised Hogia.

“Those guys have been jumping the fence to sell our mattresses,” he said, gesturing to Jewish Club 2. “We are good guys [at this camp]. Everyone is keeping themselves busy reading here.”

Said Venter: “I was raised in a house in Newcastle. So this is better than the streets, but it’s not better-better.”

Kaunda emphasised at his Glebelands Hostel press briefing that the city’s homeless, shack dwellers and hostel dwellers had been made the focus of a targeted campaign to avoid the spread of the coronavirus, which would include mass screening and testing.

The mayor’s visit to the hostel was preceded by “frantic cleaning” in the early hours of Thursday, some residents told Daily Maverick, no doubt for the sake of the large media contingent that was invited to the walkabout.

That skips were overflowing with uncollected rubbish just days before seemed to escape scrutiny. Glebelands Hostel is a squalid, violent complex where resident numbers are estimated to be between 20,000 and 22,000.

Glebelands was built to accommodate about 12,000 residents.

Nevertheless, the mayor strolled briskly around several of the hostel’s over 70 blocks, engaging residents, handing out sanitisers – a perfect photo opportunity.

Accompanying Kaunda was long-time Glebelands councillor Robert Mzobe, a man that many residents over the years have accused of being “very corrupt”.  Mzobe has always denied the allegations, saying that if anyone had proof, they should open a case with the police.

The municipality is mandated to ensure regular refuse collection and an uninterrupted water supply to all of its residents – even the more troublesome ones, so Kaunda does not deserve applause for enforcing what should have been happening at the city’s 11 hostels as a matter of course.

Three cases of Covid-19 have been confirmed in the KwaZulu-Natal townships of  Inanda, KwaMashu, and uMlazi, said Kaunda.

In the uMlazi case, a teacher with underlying health conditions contracted the virus and died.