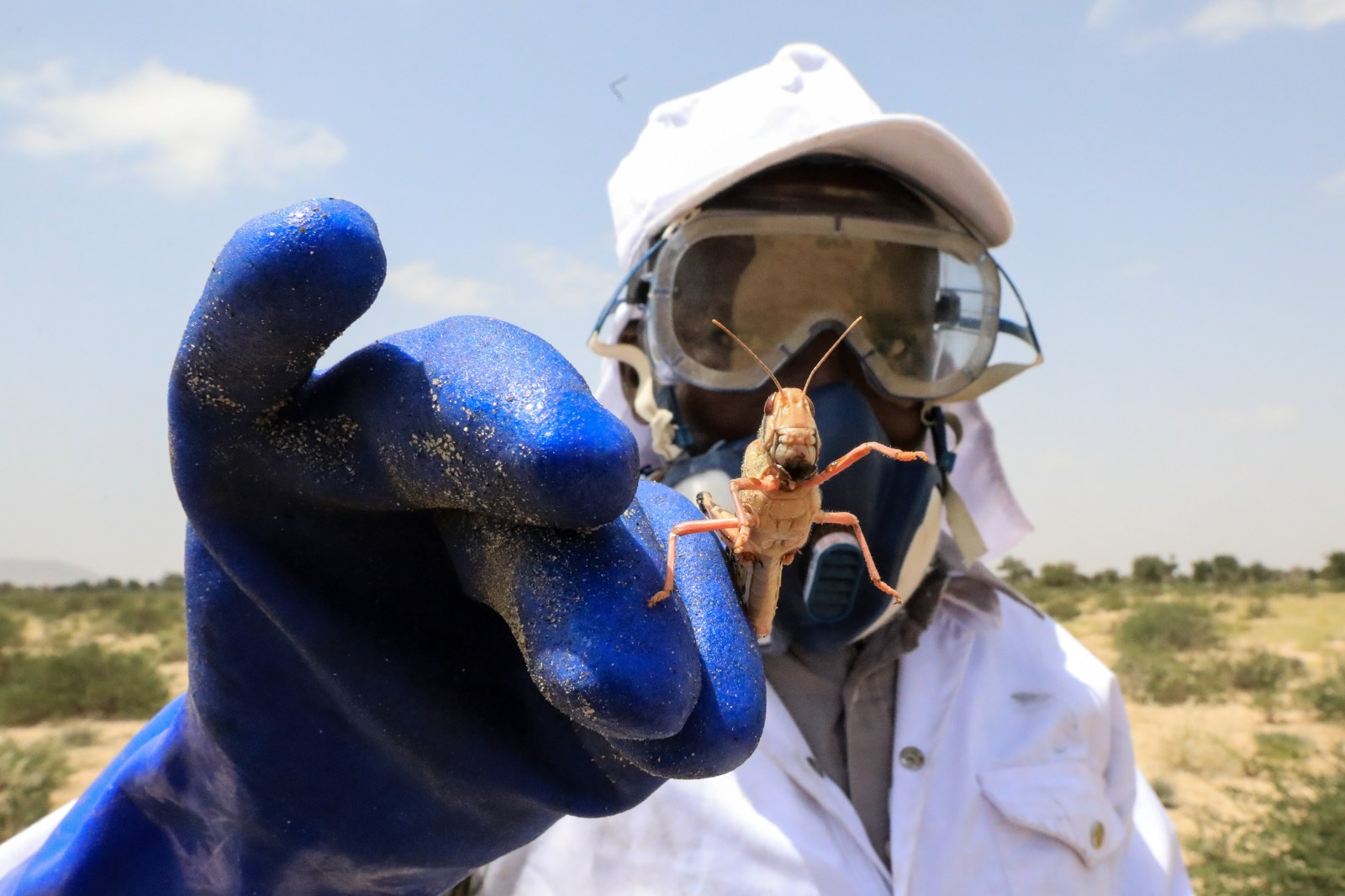 A worker from Somaliland's Ministry of Agriculture holds a desert locust after spraying them with bio-pesticide in one of the breeding grounds for the desert locusts in Geerisa town, Lughaya District, some 350km north east of the capital Hargeisa, Somaliland, 05 March 2020 (issued 19 March 2020). According to the United Nations Food and Agriculture Organisation (FAO) despite control efforts the desert locusts have rapidly spread across the Great Horn of Africa in the worst infestation in decades affecting eight countries in Eastern Africa including (Kenya, Somalia, Uganda, Ethiopia, South Sudan, Tanzania, Eritrea and Djibouti). FAO estimates that 20.2 million people are now facing severe acute food insecurity in East Africa region warning that if the desert locust swarms continue unhindered, the population could increase 400-fold by June and the next generation will begin to form swarms from late March and throughout April 2020, which coincides with the start of the next seasonal rains, and also the main planting season for the region. (Photo: EPA-EFE/Daniel Irungu)

The curbs have delayed deliveries of pesticides and, at the current rate of spraying, stocks in Kenya will run out within four days, Cyril Ferrand, FAO’s head of resilience for Eastern Africa, told Reuters on Thursday.

“If we fail in the current (regional) control operations, because of lack of pesticides, then we could see 4 million more people struggle to feed their families,” Ferrand said.

The first invasion that terrorized farmers in a region where 20 million people struggle for food has given birth to a second wave of insects just as new-season crops are being planted.

“…If we don’t have pesticides, our planes cannot fly and people cannot spray and if we are not able to control these swarms, we will have big damage to crops.”

In Kenya, the FAO was now looking to secure pesticides from local sources, Ferrand said, should the delays continue.

The spreading of the new coronavirus has forced governments to close their borders, reducing cargo flights and disrupting global supply chains, including the production of pesticides in Europe and Asia.

An order of pesticides due to arrive in Somalia by the end of last month has been delayed, though Ethiopia managed to secure enough of the chemicals before cargo flights were cut back.

Meanwhile, a lockdown imposed in South Africa last week has made it difficult to secure the helicopters that are crucial for locust surveillance.

“We need to have mobility that is equivalent to the desert locusts, that’s what helicopters give us,” Ferrand said.

The FAO has secured about $111 million of funding towards fighting the swarms. But that is $40 million less than the organization sought and contributions have dropped off since mid-March, Ferrand said. (Reporting by Omar Mohammed; editing by Katharine Houreld and John Stonestreet)