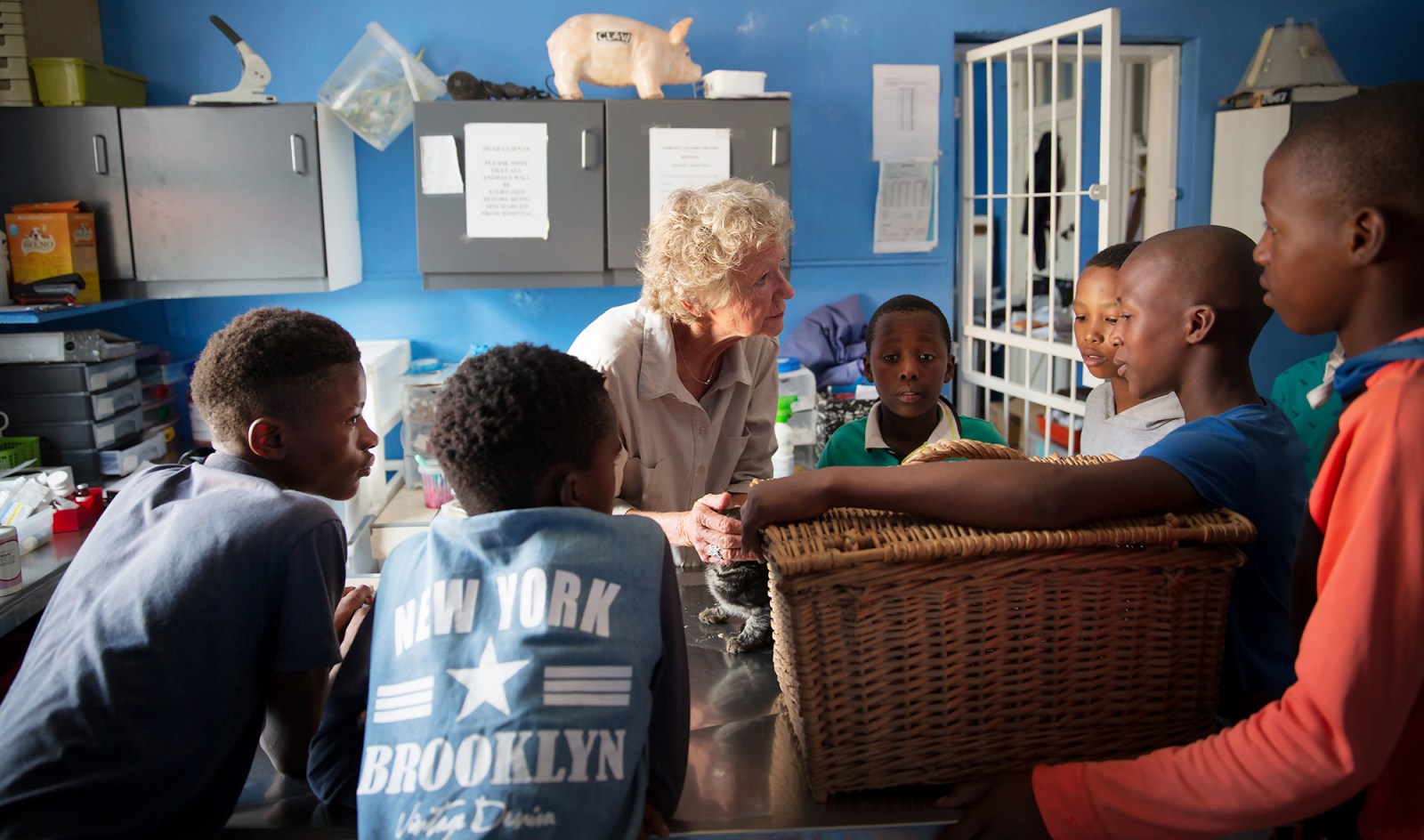 Cora Bailey, from CLAW (Community Led Animal Welfare), speaks to children who brought in a kitten that they found on the roadside. Picture: DANIEL BORN

Animal welfare has to be about meeting human needs too – not everyone sees it this way – but then again not everyone is Cora Bailey.

Coffee, cigarettes and a big dose of personal courage is how Cora Bailey gets through most days.

Bailey is the woman behind CLAW (Community Led Animal Welfare), the non-profit she set up in the early 1990s to provide vet services in informal settlements on the western rim of Johannesburg.

In the 1980s Bailey was working as an inspector at the SPCA after changing gears and careers. Before that, she had been working on the mines on soil stabilisation and dust suppression initiatives.

But it was in May 1991, when she was called to the settlement of Swaneville, that her life changed forever. It was the aftermath of the massacre that took place there on 12 May. IFP hostel dwellers, who were believed to have been escorted into the settlement by police, attacked the community, leaving 28 people dead and at least 37 injured.

Bailey was alerted when she was told that even as survivors fled to nearby Azaadville their pets were abandoned and some were still chained up.

It was a massacre recorded as just another casualty of political violence tearing through apartheid South Africa. Bailey would find similar devastation from political violence across other townships on the West Rand in the months to follow. Pets were left behind and people defeated as their lives were turned to embers and hopelessness.

It hit home hard for Bailey, but still she was told not to step outside the boundaries of polite white in those last years of apartheid.

“I heard things like, ‘If they want an SPCA in their area then they should get one started’ – the disconnect was just huge,” Bailey remembers. She didn’t stop though, and people started coming to her home asking her to help them in their informal settlements.

It was in nearby Snake Park that she met Daluxolo “DeVilliers” Katywa. Katywa would become her right-hand person and remains a stalwart of CLAW today. With his help, she continued to set up clinic days in these overlooked areas across the West Rand. On a particularly “hectic” clinic day in the settlement of Snake Park, a TV crew from Carte Blanche turned up to film them.

“Money flowed in after they ran an insert. By then I was manager at SPCA and I insisted that these donations be reserved for outreach in the informal settlements,” she says.

It was a decision that didn’t go down well and Bailey parted ways with the SPCA while still trying to carry on the services that she knew were sorely needed.

“In those days we would get donations from pharmacists, vets and hospitals of things like drugs, half bags of Ringer’s fluids and syringes that we would sterilise and reuse.”

She also had to negotiate with hostel indunas to be allowed to run a clinic in a section of one of Durban Deep mine’s hostels that had been offered to her.

“I remember that I had to sit to the side and keep my mouth shut as a woman, and one of the indunas spoke on my behalf,” she says.

Bailey persisted and got the space for her clinic. Volunteer vets stepped in, sometimes working without running water and by miners’ headlamps and light from their cars parked up against the windows, when the electricity was cut.

Even as they saved animal lives, Bailey witnessed on a daily basis the horror of human brutality and the cost of apartheid adding up in blood spilt, lives lost and a programme of oppression and dehumanisation rooting itself ever-deeper.

She remembers arriving at the clinic one morning to find the bodies of three men who had been necklaced the night before; also the man burnt alive on a car bonnet, accused of being an impimpi. She, like everyone else, could not step in.

“DeVilliers saved my life more than once,” she says of the pair being threatened when they stepped in where they were not welcome.

“DeVilliers used to also have a red overall that he would change into if we were working in an IFP section of a township,” she says of how easy it was to lose your life if you couldn’t fudge your political allegiance.

These realities made the DNA of CLAW always about communities and social justice in the goal of animal welfare. Bailey’s unique ability is to build bridges, to make deep human connections and to make networks across sectors intersect. There’s also her powerful personal conviction, her sense of purpose, and her ability to distinguish between doing the right thing rather than doing right by rules, that sets her apart.

She faces the bleakest of human tragedy and the most heartbreaking animal cruelty cases daily and still her heart does not harden. To be sure, Bailey gets pissed off, she tells people off and puts chancers in their place. Some days she admits to just being plain sick and tired. CLAW itself, even these days, is not immune to the burden of violence, crime and poverty that weighs down on the clinic and the communities it serves.

“So little has changed for so many poor people who still have to build their shacks on mine dumps or worry about where they will get their next meal,” she says, with an expletive, because it makes her that angry.

CLAW’s clinic is still based in the old environmental centre from when Durban Deep mine was operational on the West Rand. The land and property has in recent years been sold to developers. It’s left CLAW in limbo. They also rely on volunteers and donors making long-term survival tenuous.

“I’m not a martyr, that’s not who I am. But when you arrive at the clinic and you see an old man who’s carried his dog on his back and walked for kilometres to get to the clinic or someone who has brought their dog in a wheelbarrow to get help, you know that you can’t look away,” she says.

There are moments of gold though, Bailey says. It’s being able to give good news to children that their pet is going to be okay or getting an abandoned animal a forever home. These days, CLAW’s work also includes saving wildlife. It’s mostly baboons and monkeys that CLAW gets called out to trap for release as these primates are squeezed out of their shrinking natural habitats into townships and the suburbs.

And then there’s gold too when she returns to her home each night. It’s to the meows, woofs and chirps of the animals that fill her home. These are her pets and the clutch of fosters that are ever-present in the Bailey home.

There’s also her husband Tony to greet her. On especially good days he may have cooked one of her favourite vegetarian meals and folded the laundry, she says with a laugh. Maybe her favourite opera is playing in the background and maybe there’s another cup of coffee before dinner.

After 47 years of marriage Tony’s long accepted that his wife goes against the grain, that she steps in where angels fear to tread – including the time she and DeVilliers slept overnight in CLAW’S bakkie under a tree to protect a monkey stuck in the branches. The monkey was reluctant to enter the trap they set but was in danger of being killed by an angry mob.

Tony knows his wife is a fighter, but she’s also a lover – it’s her big heart that’s made her a pillar in her community, it’s also her big heart that makes her look on impossible pits of need and tragedy and to hold a steady gaze. MC/DM