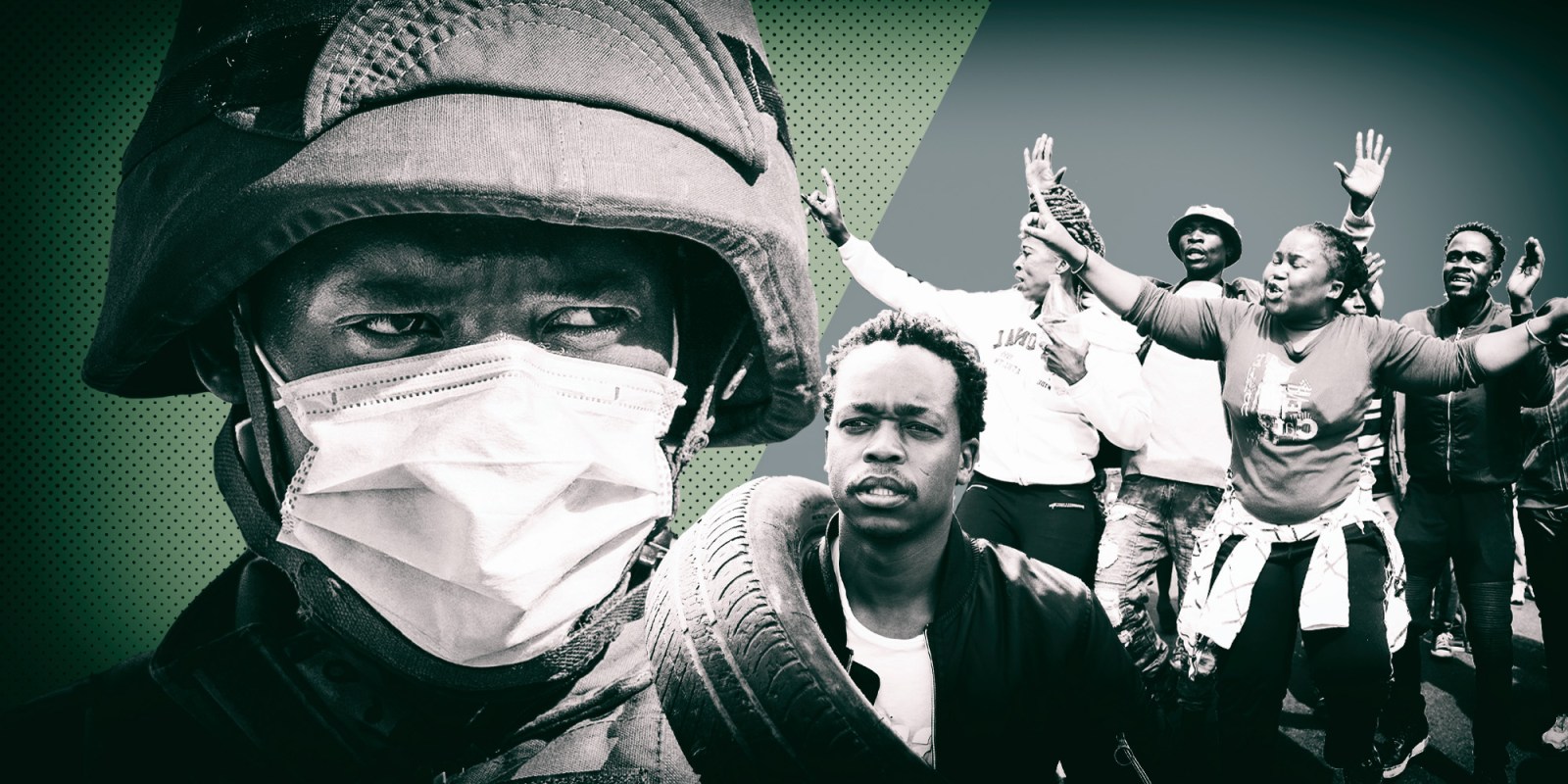 Over the past few days, there has been a series of incidents that suggest some soldiers and police officers are abusing the powers they enjoy during the national lockdown. While this is incredibly disturbing and has major implications for the continued legitimacy of the state, some government officials appear to think it is a laughing matter.

Over the first weekend of the national lockdown, the first videos emerged on Twitter showing people doing exercises in roads or streets with soldiers behind them. The soldiers were carrying their weapons and made for an intimidating sight. At first, there was confusion around whether these images were genuine, and whether they were in fact from South Africa during this time.

But then The Sowetan published an image on its front page of a group of young men doing exercises under the watchful eye of soldiers. The image carried the caption that the men had been caught playing football in a park, and were now being punished.

On Tuesday, the amaBhungane Centre for Investigative Journalism published an important account of how police officers were using sjamboks and force to keep people inside. Essentially, they were using physical violence to keep people off the streets.

So far, the response from the government does not give the impression that officials are particularly concerned about this.

Minister of Defence, Nosiviwe Mapisa-Nqakula, told Newzroom Afrika on Monday afternoon that while she condemned any bad behaviour by soldiers, people needed to stop concentrating on the “bad” videos. Instead, she suggested people should also concentrate on images showing soldiers helping elderly citizens during this time. But she did promise that there would be investigations and action following these incidents.

On Tuesday morning, spokesperson for the SANDF, Siphiwe Dlamini, first appeared to give the impression that this was not a serious issue. Interviewed on SAfm, he was asked if the law allowed soldiers to force citizens to perform exercises. He seemed to laugh, before saying he did not know.

The answer, of course, is obvious. Soldiers do not have the right, the power or the privilege to do this. We are currently in a State of National Disaster, and not the State of Emergency. The Constitution grants every citizen the right to dignity. This means that no one can force someone else to perform such an act, particularly if humiliation is part of the “punishment”.

To put it another way, there is nothing at all in any of the regulations, or the law itself, that allows soldiers to do this. And of course, it would amount to a form of punishment by the state when there has been no due process, no court process, that leads to a finding that a person had broken a law or a regulation.

All of this is so obvious, so crystal clear, that Dlamini should be reprimanded for not knowing it immediately.

Unfortunately, from that interview, it appears Dlamini gave the impression that the law does not matter, but Twitter does. He said the fact that many people on Twitter (and no doubt, talk radio) approved of the soldiers’ actions justified what they had done.

This, of course, is nonsense. The law matters, and Twitter does not. Otherwise, we would have corporal punishment, capital punishment, free data on Sundays, free DStv, Donald Trump’s wall over the Limpopo River and Julius Malema would be Caudillo of South Africa.

Worse, groups of people who have common needs, such as those who form around the lack of water in certain areas, or those who protest around electricity issues, will feel that they can go on the streets to demand their issues be addressed. If they are met with force, the only way they will be able to overcome that force is through sheer numbers. In other words, the scene could be set for massive confrontation – in a time of national lockdown.

In the meantime, some of the worst memories of apartheid are likely to be brought back to life: soldiers in townships, humiliating people through coercion or force.

All of this undermines the legitimacy of the state in the longer term. The people will once more feel that the state is only an oppressive force, that it is something to at best avoid, and if necessary, oppose.

The consequence of this is a further lack of trust in all state institutions, which has been badly eroded through State Capture and the several, some of them still ongoing, propaganda campaigns. When crimes are committed the police will not be the first port of call and the vigilantism will be very attractive again. That would lead to more state action. Wash, Rinse, Repeat of a vicious circle of violence we were all hoping never to see again in South Africa.

However, it is still relatively easy to turn this around.

First, the ministers concerned can act, and be seen to act. They can, in public, order those who lead the police and the army to investigate and punish those implicated in any wrongdoing. Then they all can issue statements and conduct interviews in which they show that action is being taken. They can sternly lecture their soldiers and officers that this behaviour will not be accepted. There can even be some form of apology.

This could impact on the behaviour of those officers and soldiers on the ground. With a careful PR campaign, involving soldiers and police officers actually helping people, the image of these institutions could be changed.

For both of these institutions, the next two weeks are a golden opportunity to create legitimacy, and in the process make their lives easier for decades to come. For many, it is the first time they will come into contact with soldiers, and police officers, who got explicit orders from the president to help citizens. All they have to do is to follow them. To make sure that they assist where they can. Small acts will make a massive difference.

That, in turn, could turn the entire cycle around. They could, in fact, come out of this with enhanced legitimacy. The patterns of the past, which have seen police officers kill Andries Tatane, massacre miners at Marikana, and look on while taking pictures for their Facebook feeds of someone dying after being attacked, could be reversed. All in the period of just a few weeks.

It will require leadership and discipline. Often in the face of some provocation. But the chance is there. Still. DM