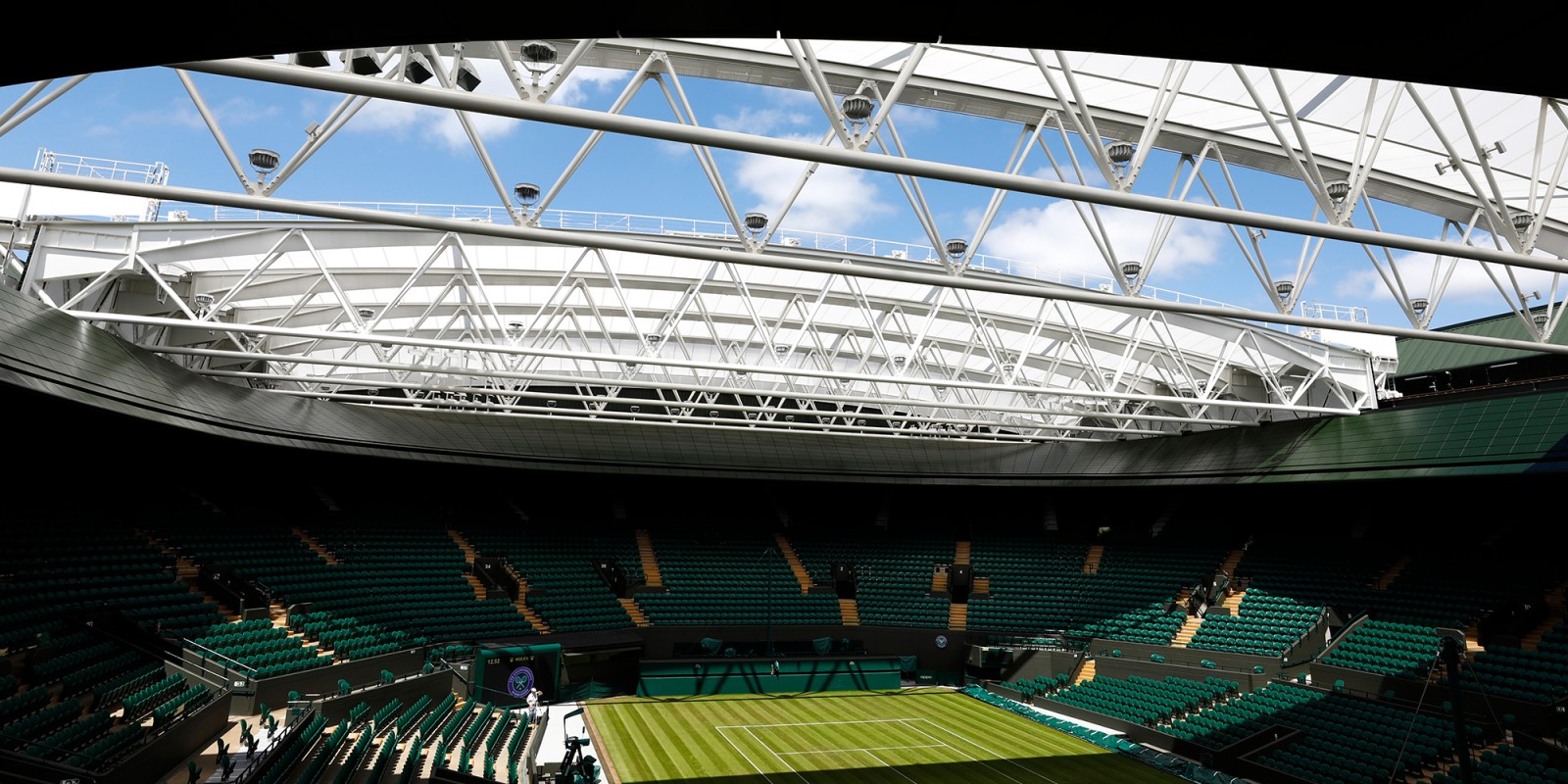 A view of Court No 1 with the new moveable roof construction during the 2019 Wimbledon Championships in London. (Photo: EPA-EFE / Nic Bothma)

Roger Federer and Serena Williams, both in the twilight of their illustrious careers, might have missed their last realistic chance to win another Grand Slam with the cancellation of Wimbledon 2020.

On Wednesday the All England Club (AELTC) and the Committee of Management of The Championships confirmed that the 2020 tournament would be cancelled due to public health concerns.

Wimbledon’s cancellation came a day after Billie Jean King National Tennis Centre in Flushing, Queens, New York, the venue for the US Open, was converted into a temporary hospital for sufferers of Covid-19 – the disease caused by the coronavirus.

New York is at the epicentre of the pandemic in the US and the temporary hospital in the suburb of Flushing will provide 350 beds. The Louis Armstrong Stadium, one of the venues in the complex, will be converted into a field kitchen to provide 25,000 meals a day for patients, medical staff and other workers.

Scenes of one the great cathedrals of tennis being turned into a hospital because the healthcare system of the richest city on earth cannot cope with the pandemic are sobering. In that context, Wimbledon’s cancellation is a minor blip in a world where just about everything has been turned upside down in the past six weeks.

At this stage, the US Open, which takes place in early September, is still scheduled to go ahead, although that is looking increasingly unlikely. It starts two months after Wimbledon was scheduled to end.

The AELTC made the painful decision as the pandemic sweeps through the United Kingdom, after three days of board meetings and conference calls. It means that 2020 will be the first time since the last year of World War II – 1945 – that the tournament won’t be played annually.

Calling off an event the size of Wimbledon requires many moving parts to be in agreement. Broadcasters and sponsors are top of the list as they had invested millions of pounds in what would have been the 134th staging of The Championships.

“Since the emergence of the coronavirus (Covid-19) outbreak in January, we have followed guidance from the UK government and public health authorities in relation to our year-round operations, alongside developing an understanding of the likely trajectory of the outbreak in the UK,” the AELTC said in a statement.

“This has enabled analysis of the impact of the government restrictions on the usual commencement in April of the significant preparations required to stage The Championships, either on the original date of 29 June, or at a later date in the summer of 2020.

“These considerations are particularly related to the concerns brought about by mass gatherings and the strain on the medical and emergency services, as well as movement and travel restrictions both within the UK and around the world.

“With the likelihood that the government’s measures will continue for many months, it is our view that we must act responsibly to protect the large numbers of people required to prepare The Championships from being at risk – from the training of ball boys and girls to thousands of officials, line judges, stewards, players, suppliers, media and contractors who convene on the AELTC Grounds.

“We also had to consider that the people, supplies and services legally required to stage The Championships would not be available at any point this summer, thus ruling out postponement.”

The men’s ATP Tour and women’s WTA Tour also confirmed more event cancellations over the coming months, which has brought professional tennis to a complete standstill. The entire European grass court season has been cancelled.

The suspension comes into effect at all levels of the professional game, including the ATP Challenger Tour, as well as the ITF World Tennis Tour. Tournaments starting after 13 July 2020 are still scheduled to proceed.

“Regrettably, the ongoing Covid-19 global pandemic leaves us with no choice but to suspend the Tour further; a decision we’ve made in close co-operation with our members and the other governing bodies of tennis,” said Andrea Gaudenzi, ATP Chairman.

“Health and safety remains the top priority as we navigate the challenges ahead in these unprecedented times, and we will do everything we can for the Tour to resume at the earliest opportunity once it is safe to do so.”

“This was a decision that the WTA and its members did not take lightly, however we remain vigilant in protecting the health and safety of our players, staff and fans.

“While we share in the disappointment of the season’s further postponement, our priority remains to support each other during this unprecedented time and work together as a sport in preparation of our return to play.”

So far Wimbledon is the only Grand Slam cancellation. The French Open has been postponed from its May/June time slot to late September. There simply wasn’t another gap in the schedule for Wimbledon to fill.

Also, given that Wimbledon is played on grass, the summer is the only time it can be held as the courts are only in playable condition for a few months a year.

The rye grass, which is neatly clipped to 13mm throughout the championships, is fickle. Playing in the British autumn would not work on the surface.

Federer, 38, will be one month shy of his 40th birthday when the 2021 Wimbledon final takes place. The great Swiss’s longevity in the game is unparalleled in the modern era, but winning his ninth men’s singles title at Wimbledon in 2021 is highly unlikely. This year probably represented his last realistic shot.

On social media, Federer posted one word in his initial response to the news: “Devastated”.

Williams, who is the same age as Federer, is also running out of time to win her 24th career Grand Slam singles title that would make her the most successful singles player in terms of majors in the history of the sport.

“I’m shooked” was Williams’ social media reaction to the news that Wimbledon 2020 has been canned. With the US Open looking increasingly unlikely to go ahead and the French Open, despite being postponed, still far from a certainty to take place, Williams might have to wait until the Australian Open in January 2021 to attempt to reach that milestone.

Both Federer and Williams have won their share of singles Grand Slams (43 between them) and had great careers, but there was a feeling that 2020 was something of a valedictory season for both tennis greats. That has been cruelly ripped from them, but in the context of what’s going on globally, two tennis players missing out on a chance to win one of the majors, again, seems churlish.

Federer has already donated one million Swiss Francs (R18-million) to help fight the pandemic with current men’s No 1 Novak Djokovic having done the same.

It’s at the lower end of the sport where the suspensions and cancellations are really hurting. Players outside the top 150 on both the ATP and WTA Tours really struggle to make ends meet, given the expense of moving around on tour to different tournaments in far-flung corners of the world.

This week, before Wimbledon’s cancellation, fringe tour professional Sofia Shapatava from Georgia started an online petition on change.org for financial support. There is no tennis being played anywhere in the world and the 31-year-old cannot pay her bills.

“I had many conversations with my colleagues and friends about their plans for the upcoming months. Lower-ranked tennis players have no savings and it is a very hard topic,” Shapatava, the world number 375, wrote.

“Usually everyone makes money on the side by coaching or club matches or prize-money tournaments but, in this situation, countries are on lockdown so there is no way to get additional income. We have no security, nor does anyone take care of us.

“I am sure I can put food on the table. But nobody stopped bills and we still have to pay for everything every month, and it is very hard to do when you stay without income completely for a couple of months.”

Wimbledon may be gone for a year, and Federer and Williams might not win another major as a consequence. But more worryingly, professional tennis might have lost hundreds of players when the pandemic has passed because they simply cannot afford to go on. DM