Despite lockdown, the UK military still flies, risking the spread of coronavirus 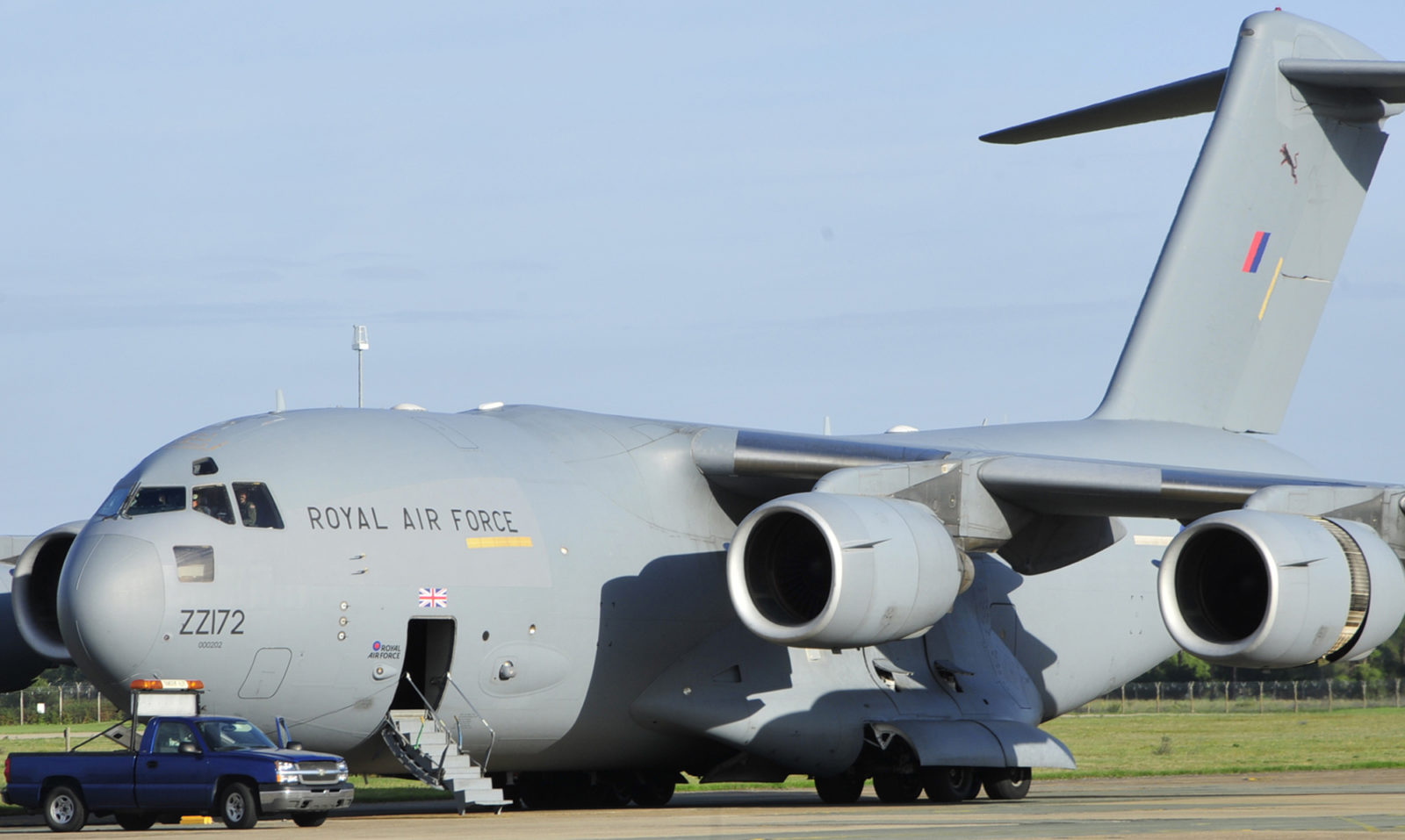 Since air travel was largely locked down to curb the spread of coronavirus, the UK military has airlifted personnel to at least six countries that have banned British travellers or flights — potentially moving thousands of troops.

In the past two weeks, the Royal Air Force (RAF) has flown 30 air transport planes — built to move troops around — from the UK to Belize, Cyprus, Estonia, Germany, the US and Finland, all of whom have imposed bans on UK travellers and/or flights entering the country.

All the flights come from RAF Brize Norton, the UK military’s main domestic airport in Oxfordshire, southern England, and home to its air transport fleet. Typical capacity for RAF air transport planes based at Brize Norton ranges from 96 to 291 troops.

The US, which now has the world’s highest number of confirmed coronavirus cases, banned the entry of nearly all UK travellers on March 16. Despite this, in the past week, military air transport flights from the UK to the US have landed in Las Vegas, Nevada; Dover, Delaware, and Knoxville, Tennessee.

Some of the airports being used to move these military personnel — like Philip Goldson International Airport in Belize — are also used by civilian aircraft, raising further concerns about the spread of coronavirus.

The Ministry of Defence (MOD) said it will not release information on how many of its personnel are infected with coronavirus, telling Declassified UK: “We do not comment on the personal or medical details of our people.” It has, however, been reported that 300 soldiers are locked down at their barracks in Aldershot, Hampshire, with “no hygiene essentials”.

There is also a body of evidence suggesting that the military environment is amongst the leading spreaders of disease.

Particular concerns are likely to be raised about UK troop movements into Cyprus. RAF Akrotiri, one of the UK’s two bases in Cyprus, has been by far the most frequent destination for the UK’s air transport flights.

Since Cyprus banned the entry of British nationals and flights into the country earlier this month, the RAF has conducted air transport flights there close to every day from Brize Norton. In the past 10 days, RAF air transport planes have also arrived in Cyprus from Finland and the United Arab Emirates.

The military flights to Cyprus are to Britain’s two “sovereign base areas” — measuring about 100 square miles (260sq km) — which were retained on the island when it won independence in 1960.

There are usually no restrictions on entry and exit to these British areas from the rest of the country, meaning for the purposes of public health they are effectively part of Cyprus. Last week, however, the British military on Cyprus enforced restrictions on movement and public gatherings and announced a “suspension of all but essential operational business activity”.

Seven cases of coronavirus have now been detected on the UK’s bases in Cyprus, where nearly 6,000 British military personnel and their dependents live.

On March 13, two British soldiers tested positive for coronavirus after arriving at the civilian-military airport in Paphos, Cyprus — on their way to RAF Akrotiri from the UK. The RAF was still using Paphos airport for air transport flights last week.

British Forces Cyprus says arrivals from the UK are now being screened for the virus and ordered to self-isolate for two weeks.

RAF Brize Norton is the UK air base to which British nationals stranded in Wuhan — the “ground zero” of the coronavirus outbreak in China — were previously evacuated. One passenger fell ill with symptoms of the virus during one of the rescue flights into Brize Norton.

Some of these flights — which ran for two weeks after January 31 and transported more than 300 people from Wuhan — had UK military medics on board.

It is not known if any passengers tested positive for coronavirus or if the Cypriot authorities — or other countries still receiving military flights from Brize Norton — were consulted about the rescue operation.

Coach drivers who collected the British evacuees at RAF Brize Norton were given 10 days paid leave to isolate themselves. The coaches were “deep-cleaned” and temporarily removed from service.

The Oxford Mail reported at the time that local residents “expressed concern about the potential arrival of the virus so close to home”. Some 5,800 British military personnel are stationed at Brize Norton.

The Ministry of Defence (MOD) told Declassified UK that the flights carrying evacuees from Wuhan only used the runway at RAF Brize Norton before passengers departed and “there was no direct contact between them and staff or infrastructure”. A spokesperson added: “Nonetheless, necessary decontamination and safety procedures were conducted.”

Last Sunday, an RAF plane flown from Brize Norton transported a suspected coronavirus victim from Shetland to Aberdeen in Scotland with military personnel onboard.

“Patient zero” in Cyprus, where 262 people have been diagnosed with coronavirus, was a 63-year-old British national who had contracted the virus after being visited by relatives from the UK. One of the other two people to die from coronavirus in Cyprus was also a British national.

The UK’s two sovereign base areas in Cyprus, Akrotiri and Dhelekia, are located on the south and east coast of the island respectively and represent 3% of Cyprus’s land area.

The Cypriot government has no jurisdiction over what happens on the UK bases, which are governed by a British military commander, even in a global health pandemic like coronavirus. The base areas, however, are not self-contained.

Cyprus itself has imposed a strict lockdown until 13 April. Since 11 March, police have carried out more than 11,000 checks on people and establishments and reported 32 violations.

Cyprus banned the entry of foreign nationals into the country on 15 March and on 21 March went further and stopped flights from 28 countries, including the UK.

In the last fortnight, however, the UK military has conducted 16 flights from RAF Brize Norton to Cyprus, an average of more than one per day. This Tuesday, two UK military flights, which take around four hours, left for Cyprus within three hours of each other.

RAF Akrotiri, which the MOD describes as an “extremely busy” airport, is a staging post for bombing missions in the Middle East. There is also a major GCHQ spy facility operating from Dhekelia, the eastern UK base in Cyprus.

The UK’s bases on Cyprus, which Declassified UK recently revealed cost the UK taxpayer £80 million to run last year, have long been the target of anti-war protesters and Cypriot nationalists.

The military and disease

There is a body of evidence suggesting that the armed forces are among the leading spreaders of disease, explaining why the UN’s World Health Organisation has given specific warnings on the issue.

Historians believe US military forces were “instrumental” in the rapid spread of the 1918-1919 influenza pandemic during World War I, widely cited as the last precedent for the current coronavirus outbreak.

It is thought that UN troops in Haiti were the source of an outbreak of cholera in 2010 which has since killed 10,000 people in the Caribbean country.

Scientists warn in one academic study: “The communal nature of living and training environments, alongside sub-optimal hygiene and stressors in the field, place military personnel at higher risk of contracting emerging infectious diseases.”

In 2013, 100 British soldiers protecting the Queen at Windsor Castle contracted scabies after returning from a military exercise in Germany.

The MOD told Declassified UK: “The armed forces are sustaining all operations critical to the defence of the United Kingdom, both at home and overseas.” But, a spokesperson added, “When deploying our forces across the world we recognise and respect measures put in place by individual nations and partners to mitigate the Covid-19 virus and will abide by them.”

Some 20,000 troops have been readied to deploy across Britain to counter the spread of coronavirus. DM

Matt Kennard is head of investigations at Declassified UK. He tweets at @DCKennard.