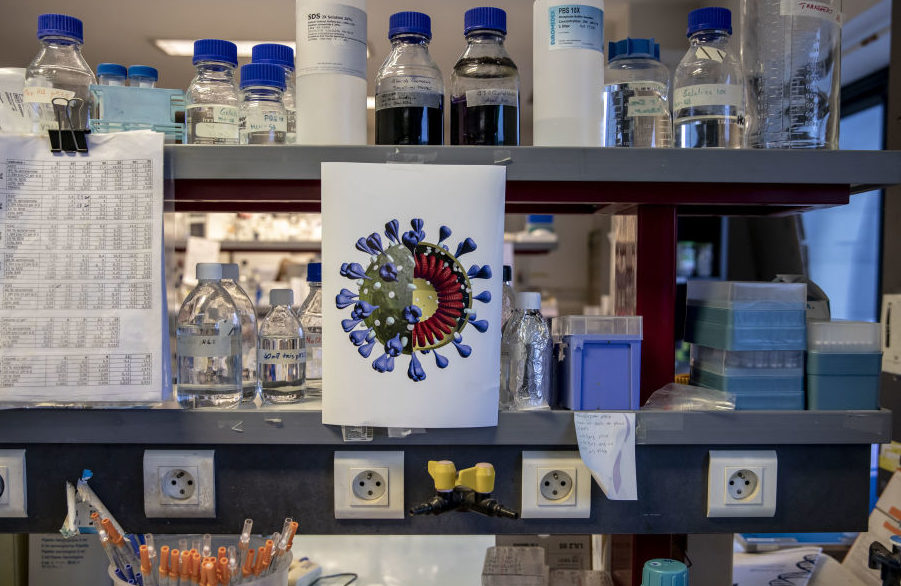 A magnified coronavirus germ illustration sits beside laboratory glassware during coronavirus vaccine research work inside the Pasteur Institute laboratories in Lille, France, on Monday, March 9, 2020. The euro-area economy may be headed for its first recession in seven years as the coronavirus outbreak takes an increasing toll on businesses and consumer confidence. Photographer: Adrienne Surprenant/Bloomberg via Getty Images

As more and more companies enter the race to create a vaccine that will protect us from the potentially lethal effects of Covid-19, we look at where vaccines come from, how one can be created to tackle Covid-19 and what the hurdles are.

Long before vaccines became a thing, inoculation – which is intentionally introducing a pathogen or antigen that “can cause a disease into a living organism to stimulate the production of antibodies” – was current practice in Africa, China and India some 2,000 years ago.

According to The National Centre for Biotechnology Information (NCBI), smallpox, caused by the variola virus, appeared around 10,000 BC, “at the time of the first agricultural settlements in north-eastern Africa”. The virus spread around the world with disastrous effects on humankind; yet, survivors of smallpox seemed to then be immune from the virus.

This is when inoculation, also called variolation, started. “The inoculator usually used a lancet wet with fresh matter taken from a ripe pustule of some person who suffered from smallpox. The material was then subcutaneously introduced on the arms or legs of the non-immune person”, says NCBI. And the practice had some degree of effectiveness. Many inoculated people did become immune to smallpox, but some also died while others even started a new epidemic.

Still, there was hope and by 1796 British physician Edward Jenner, who had observed how milkmaids were generally immune to smallpox – he assumed this was probably because of the “pus in the blisters that milkmaids received from cowpox (a disease similar to smallpox, but much less virulent)”, decided to insert pus from a cowpox pustule into an eight-year-old boy’s arm.

The boy not only survived the experiment but also became immune to smallpox. Although the experiment proved conclusive, the vaccine wasn’t born yet. The Royal Society, the UK’s scientific academy, needed more proof and vaccination only became widespread two years later. And it took almost another two centuries to eradicate the smallpox entirely; it was eliminated in 1979, with the last case seen in Somalia two years earlier.

Today, as Covid-19 rapidly spreads across the world, the search for a vaccine against the novel virus is hastening. An article published by The Guardian newspaper on 25 March explained that: “About 35 companies and academic institutions are racing to create… a vaccine, at least four of which already have candidates they have been testing in animals. The first of these – produced by Boston-based biotech firm Moderna – will enter human trials imminently.”

The process to create a vaccine is a complex one: as the Institut Pasteur in France explains, scientists need to understand more about the virus, the “face” of the virus, in order to recreate the pathogen and extract antigens, the virus’ toxins that spark an immune response in the body, and hopefully find antibodies “that may have therapeutic applications”.

The Guardian Laura Spinney reported that this process can be achieved by “using live, weakened forms of the virus, or part or whole of the virus once it has been inactivated by heat or chemicals”.

Professor Ed Rybicki, from the Department of Molecular & Cell Biology and Institute of Infectious Disease and Molecular Medicine at the University of Cape Town, adds that “novel viruses require experimental investigational work, such as growing the novel virus in culture – which is often not easy – characterising it by sequencing it, fortunately [it is] very quick these days, and can be done without culturing it, then by looking at its components and how they relate to known viruses”.

Yet, as it sometimes happened with inoculation, “the live form can continue to evolve in the host, for example, potentially recapturing some of its virulence and making the recipient sick, while higher or repeat doses of the inactivated virus are required to achieve the necessary degree of protection”.

Another option, Spinney notes, is to extract “the genetic code for the protein spike on the surface of Sars-CoV-2 (Covid-19), which is the part of the virus most likely to provoke an immune reaction in humans, and pasting it into the genome of a bacterium or yeast – forcing these microorganisms to churn out large quantities of the protein”.

It can take years to find the right vaccine and although few companies and institutes around the world have already started human trials, results will only be known in a few months without any assurance that they’ll work.

Rybicki explains that the human testing phases, following quite extensive animal testing for toxicity, immunogenicity and dosing, are broken into three phases:

First, there needs to be safety trials in a few human volunteers; “20-80 people, healthy volunteers who are monitored for reaction frequently. Some data can be gathered on immunogenicity in these trials”, says Rybicki.

The second step is trials over “several hundred people screened by strict criteria, usually not in a disease risk group, where more safety but also primarily immunogenicity and dosing schedule and amounts are trialled. These trials generally include randomized dosing, with placebo groups”.

Finally, “Efficacy trials, on thousand or multiple thousands of people, in at-risk groups of people; randomised double-blind placebo-controlled trials, that look for lower incidence of infection in vaccinated vs placebo groups generally after the trial is finished”.

But there can be many hiccups along the way. Rybicki says the main challenges are “investigation of the components of the virus, getting them made, and money to do the work!”

In the case of Covid-19, the challenge is also the novelty of the virus. Spinney explains that “In contrast, Sars-CoV-2 is a novel pathogen in humans, and many of the technologies being used to build vaccines are relatively untested too. No vaccine made from genetic material – RNA or DNA – has been approved to date, for example. So the Covid-19 vaccine candidates have to be treated as brand new vaccines”.

When asked about collaborations between institutes and research centres around the world, Rybicki says that: “A collaboration between various centres is proposed; what is happening right now in terms of response is a scramble to develop and roll out tests – mainly nucleic-acid based – by the NICD and partners, and to sequence virus isolates by NICD and various academic groups.

“We started quite early here at UCT with proposing a South African programme for vaccine development: this would have involved mine and Professor Anna-Lise Williamson’s groups and partners like Professor Wolfgang Preiser at Stellenbosch University, in making several candidate vaccines (our groups) and doing neutralisation tests on animal serum injected with these candidates (Preiser). We expanded this into a proposal to Department of Science and Innovation (DSI) which included Professors Jonathan Blackburn, Ed Sturrock, Wendy Burgers and Dr Mani Margolin from UCT, which aimed at a “One Health” type of approach, where we would produce and test proteins as possible components of serological test kits, some of which could also be used as vaccines. This got subsumed by a national effort apparently led by the South African Medical Research Council (SAMRC) and DSI on trying to co-ordinate response efforts – which seem to have as their priority the development and deployment of PCR-based testing, with serological reagent provision – very necessary for bedside blood tests and testing to see who is already immune – more on a back burner, and vaccines a “maybe for the future”.

On the progress made, Rybicki explains that their group has been able to create through cell culture and plants a “candidate reagent or vaccine based on the S or spike protein of SARS-CoV-2”. He is confident that this could give the basis of “a reagent supply to other institutions or companies for the formulation of serological assays”. ML

Passages from ‘The Rhino Conspiracy’