Eastern Cape bus disaster: ‘Grant day a painful reminder of those we lost’ 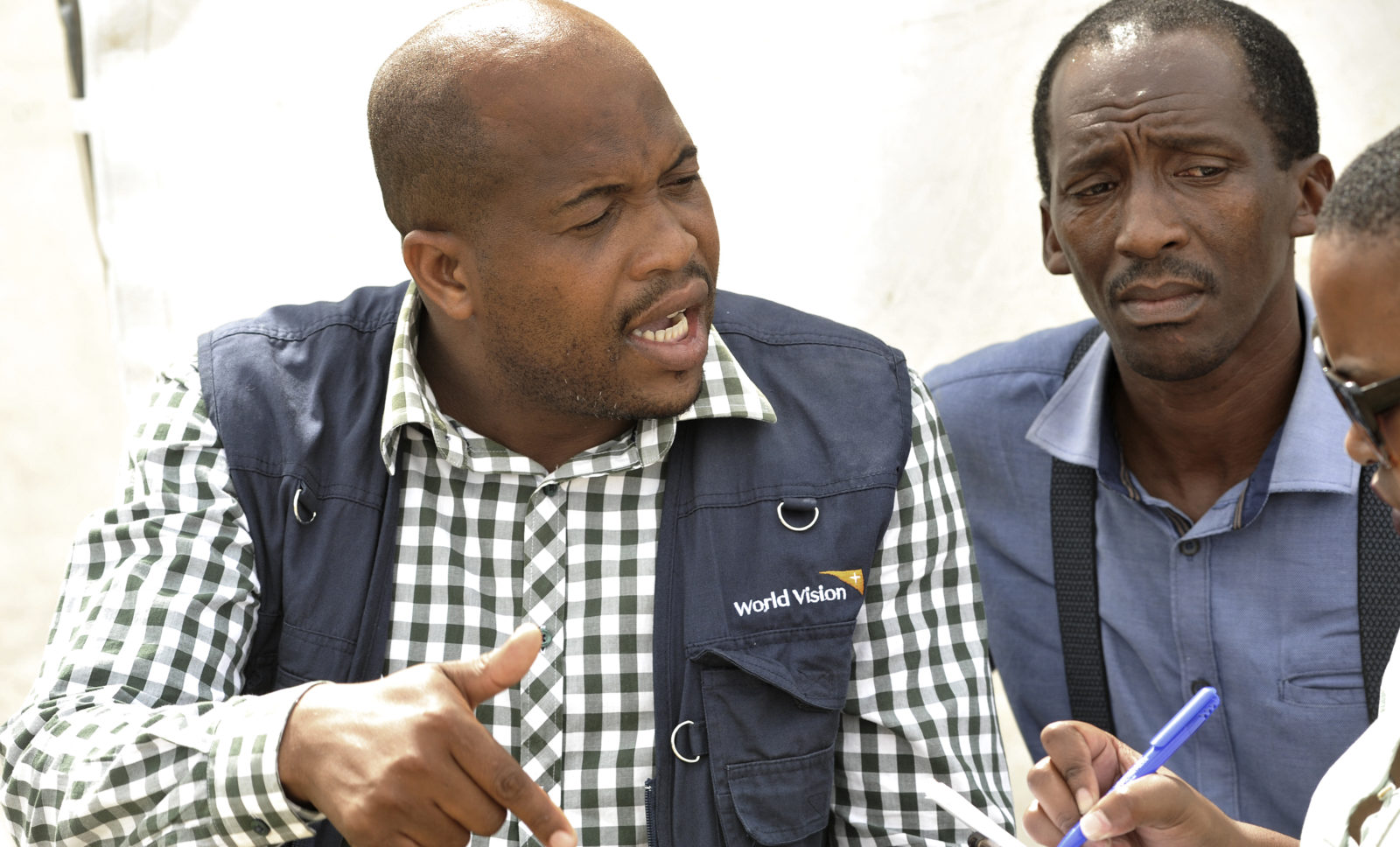 Cebe Village chief Phathuxolo Tyali says families who lost loved ones were still in disbelief. He has also called on the provincial government to upgrade the roads in the area. On the tight Cebe junior secondary school principal Ngqaleko Mkunqwana. (Photo: Mike Holmes)

As most South Africans focused on long queues and personal distancing measures during the March grant payment day, residents of a tiny village in Eastern Cape marked one month since their lives were shattered by a horror bus crash.

The Eastern Cape village of Cebe, near Centane, is still in shock after a bus crash that left children orphaned and families without breadwinners. The death toll stands at 26.

“We are still in disbelief,” said village chief Phathuxolo Tyali. “Most families lost their only breadwinners and some were the only parents in the home. It’s all very painful.”

Tyali gave an example of a woman who died and who is survived by a bedridden husband and four children. It was proving difficult to move on from the tragedy, he added. A step forward had been followed by ten steps back when another woman, injured in the crash, died in hospital last week.

“In fact, the whole of Centane is still trying to deal with this. We just don’t know if there will be any more deaths as people are still in hospital,” said Tyali.

On 2 March, shortly after picking up pensioners and other residents of Cebe village, the AB350 bus, contracted by the government, veered off a gravel road and plunged down a steep embankment. It is still unclear what caused the accident. Transport Minister Fikile Mbalula said a report would be given to Eastern Cape Premier Oscar Mabuyane.

A total of 25 people died on the scene, while dozens of injured were rushed to hospitals in Thafalofefe, Butterworth and Frere. Of the 25 deceased, 23 were buried in a mass funeral organised by the Eastern Cape government.

The death toll rose to 26 when the woman died at Frere.

Bus driver Andrew Ntsomboyi, 61, and his wife Valencia Mabhengu, 53, were among those killed. Villagers said the driver hailed from another village near Centane known as Rhwantsana. Tyali said he believed many of the passengers could have been saved if people in the village had been trained in first aid.

“Rural communities need to have people trained because when we arrived at the scene we didn’t know what to do before the ambulance arrived. We couldn’t help our people and a lot of them died because of the delay.”

Tyali called on the government to upgrade roads in the area. He also said he would petition the Amathole house of traditional leaders to start talks about having the Department of Social Development reopen grant pay points in the village. Up until mid-2018, South African Social Security Agency (Sassa) beneficiaries could get their monthly social support grant money from village retailers and ATMs.

This policy was changed, making The Post Office the sole grant payment point – forcing those living in villages to travel to nearby towns.

Every month, Cebe village residents make the trip to Centane to get their money and to shop. The road from Cebe to Centane traverses two tiny bridges that were flooded and impassable in the recent rains.

On the day of the accident, at about 8am, Cebe residents got word that the bus to town had crashed. They rushed to the scene to try to help the stricken passengers.

For widower Malibongwe Magusheni, 52, it was a dreaded phone call from a relative that saw him rush to Thafalofefe Hospital, only to find that his wife Nonelikhaya, 49, had not been admitted. He then rushed to the crash site.

“I found her there myself. I was extremely disturbed by the sight and I didn’t know what to do with myself.”

Magusheni said he had yet to figure out how he would take care of five children without his wife. The children are aged between three and 27 and the family has survived on the children’s support grant and pay from casual jobs.

“My wife was the one who took care of the home and the children. Now I have to start a new life as both a father and a mother to our children.”

Nonelikhaya preferred taking the bus to town as it was cheaper at R24 than the R35 for a taxi.

“The children are still struggling to deal with this and I am worried they will never recover. It’s all so confusing, especially since we don’t know what really happened,” Magusheni said.

Other bereaved villagers blamed the bad state of the roads for the accident. Neziswa Gana, 43, whose father Lashawuta Gana, 83, died, said the tragedy would not have happened if people didn’t have to go to The Post Office to receive their payouts. Gana, who works in Johannesburg, said her father would be missed by the entire village.

“My father was very knowledgeable when it comes to traditions and customs and people always came to him seeking advice. He has died with a wealth of knowledge.”

She said she did not trust the government to keep its promises to build a tarred road between Cebe and Centane.

“I don’t even want to comment on the state of the road because we were told years ago that it would be fixed; now this has happened. It is an empty promise and I know that after the funeral government officials are going to leave and never look back,” Gana said.

The mood at the Cebe Junior Secondary School, where the funeral took place, was sombre. Meanwhile, Frere Hospital in East London was a hive of activity as injured patients were still being treated. Thandiwe Gcwina, 62, survived the crash but is struggling with injuries to her head and ribs.

Gcwina said when villagers, mostly elderly people, boarded the bus on that fateful Monday morning they were chirpy about the trip to town.

“But things quickly took a turn for the worst near Emsengeni bus stop in Cebe,” she recalled. She thinks the driver lost control of the vehicle.

“We had no idea this horrible thing would happen to us that day. We were happy to finally be able to board the bus to town,” Gcwina said.

She knew they were in danger when she saw one of the vehicle’s tyres pop out.

“At first it felt like the driver had driven over a large rock and we all asked what was happening. People started shouting and then there was complete silence and then more screaming as the bus started going down.

The bus rolled about four times with us inside before coming to a standstill. I passed out and then woke up to more screams while I lay in the bushes,” Gcwina said.

“I don’t see how we can move on from this; most of the passengers were elderly people who knew our customs and traditions,” she said, vowing to never again board the bus to town.

Cebe Junior Secondary principal Ngqaleko Mkunqwana said the disaster had not only disrupted learning and teaching at the school, it had left many pupils without parents.

“Kids have lost grandparents and some both their parents. That’s our biggest challenge right now,” Mkunqwana said. Going through the list of the deceased, Mkhunqwana pointed out the school had lost members of its governing body.

“Many of them were prominent people in the community who not only contributed to the school but also have children who attend Cebe Junior Secondary School.” He is concerned that some people will relocate to other towns and the number of pupils will dwindle, possibly leading to closure of the school. Mkhunqwana, who lost his sister Gladys, said the scene of the crash was one of the most horrific things he had seen.

“I’ll never forget what I saw that day; it was very disturbing,” said Mkhunqwana, a descendant of one of the village’s founding families, who settled in Cebe from the former Ciskei in the late 1800s.

There is some light at the end of a dark tunnel. After five years of severe drought and water shortages, Cebe residents are set to have clean drinking water after Gift of the Givers Foundation drilled two boreholes in the village. One borehole will provide drinking water for the school while the other will be used by the village.

The foundation also donated 60 Jojo tanks, blankets, food and school stationery to the community. Gift of the Givers project manager Ali Sablay said the foundation wanted to honour those who had lost their lives in the accident in a proper manner.

“We have put ourselves in the shoes of those who are left behind. If our loved ones were in this situation we would want to give them the best, that’s why we decided to help. It’s vital for us to honour the deceased,” he said.

Also bringing much-needed relief to the families was the South African Funeral Practitioners’ Association (SAFPA), which donated coffins with a combined value of R355,000. SAFPA public relations officer Vumile Tsuluka said the organisation would erect a monument bearing the names of those who died.

“As of now, we don’t know the actual cause of the accident. We are waiting for the investigation to be completed and only then will we know what happened,” said Siguqa, denying allegations of overloading and pointing out that the bus was only two years old.

Siguqa revealed that the company had asked the government to upgrade roads in the area:

“In a meeting last month we proposed that we upgrade the roads ourselves and have the government reimburse us.”

Talks about entering into a service-level agreement with the Department of Transport would continue. Speaking at the funeral, Eastern Cape Premier Oscar Mabuyane said his government would look at bringing more services to the village and asked residents to engage with his team.

“We send our condolences to the families. We know that this isn’t the first accident of this kind. This happened in Willowvale and we know it seems as though we only work when there is an accident. We want to change that… We are here to also apologise because bringing services to people, including Sassa payouts, is our job. We also want to thank those who helped during the bus accident because that helped save many lives,” Mabuyane said. MC

Back to school: Getting our funding (and other) priorities right

Living on a prayer: Concerns as places of worship prepare to reopen their doors

WhatsApp with the new grants? GovChat flooded by millions of messages