State must enlist community activists in the war against COVID-19 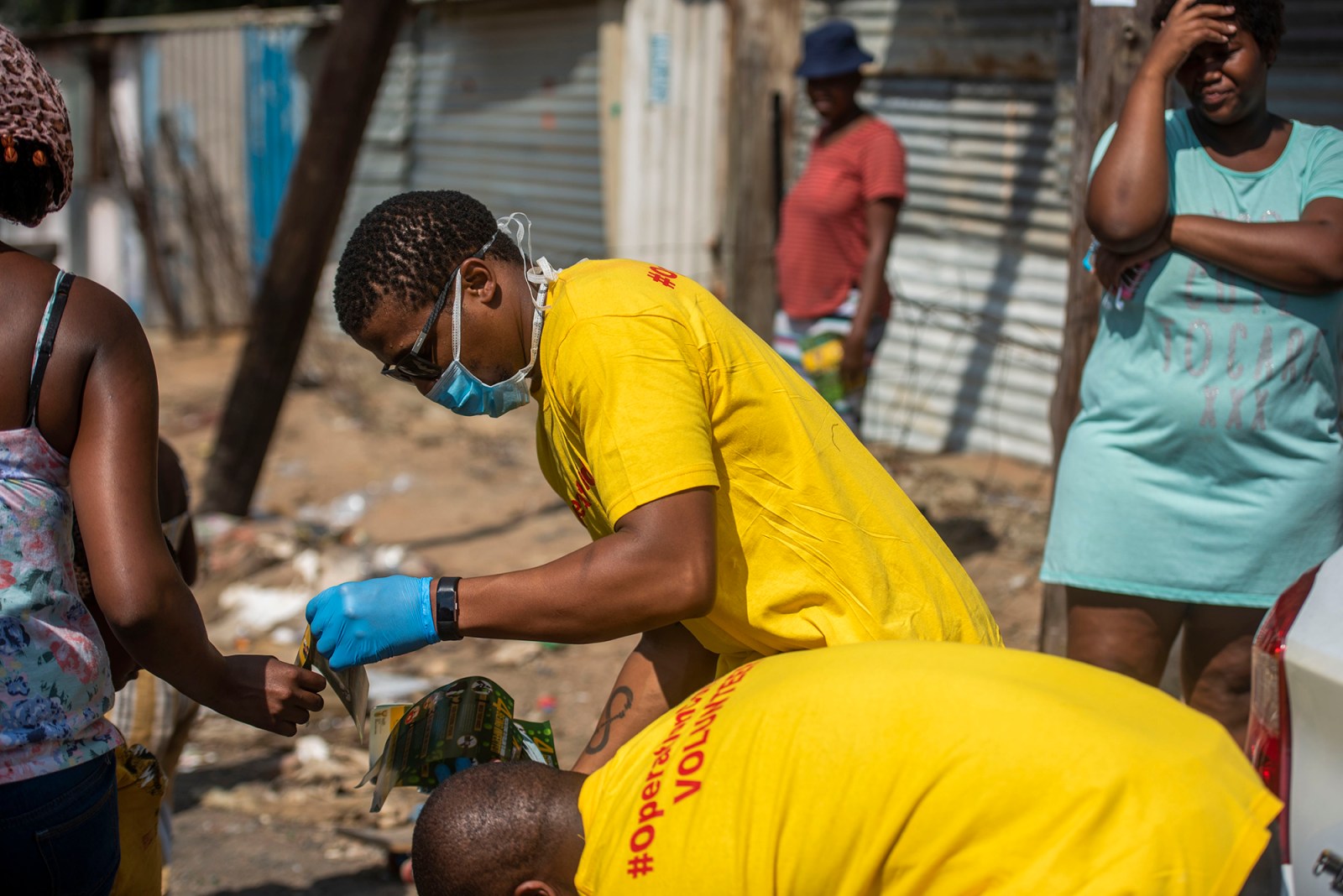 JOHANNESBURG, SOUTH AFRICA - MARCH 21: Groups of volunteers from the #OperationCovid19 civil society initiative hand out soap and flyers to residents of the densely populated Diepsloot township in Johannesburg amid concerns over the spread of COVID-19 coronavirus, on March 21, 2020. Volunteers distributed soap bars and informative leaflets to the resident in a move aimed to bolster awareness of the risk of poor hygiene. It is reported that Operation SA, The Covid-19 Action Group, Laudium Disaster Management and partners aim to distribute one-million bars of soap to deserving communities over the next two weeks. (Photo by Gallo Images/Alet Pretorius)

Community leaders recognise they are dealing with an unprecedented emergency and want to work with the government to ensure an effective response.

Yesterday’s chaos outside social grant pay points was predictable, and it was raised in advance by community activists and civil society leaders.

Permits should have been given to experienced local leaders so they could organise their own auxiliary forces. Failure to do this led to inability to insist on physical distancing of 1.5m. Old people are more likely to be sick and more likely to die from the coronavirus, and the government’s poor planning will lead to increased fatalities.

Some members of the government became aware of the problem, but too late. Gauteng Premier David Makhura called for assistance from “volunteers, particularly those that have been identified”, and the Department of Social Development arranged for permits for some members of the shack-dwellers’ movement Abahlali. This approach should now be expanded.

It is likely that problems arise because of suspicion about community leaders, some of whom have participated in service delivery protests. But these protests highlighted weaknesses in government administration that could have been fixed, and they gave credibility to those who led them. From our interviews, such leaders recognise we are dealing with an unprecedented emergency and they want to work with the government to ensure an effective response.

Some media reporting has implied that physical distancing is not observed because people from poorer areas are unaware of the danger or rejected the regulations. There is some truth in this. As with supermarket queues, people waiting for their pensions are pressed forward by those behind them. Moreover, education about the virus and regulations has been undertaken haphazardly.

This situation could have been avoided. We should not assume that poor people, and, specifically, those living in informal settlements, are homogenous. Even in congested settlements, there are possibilities for practising distancing and many people are doing so.

Several of the leaders we interviewed said they kept their children in their yards, and some confined them to their shacks. One said their children played with others, but through the wire fence that separated their yards. Another said they made sure their children could watch their favourite TV channel. One activist said that although she shared her bed with her child, they slept under different blankets to reduce the risk of spreading infection. Yet another explained that inside their yard and shacks, people were sitting as far apart from each other as possible.

Advice about handwashing and sanitising was being practised. Two of the activists said they and their families were washing their hands every two hours. Another said they had sanitiser outside their communal toilet so that people could clean the seat. Dettol was also used in some cases. Another said he had a cloth for disinfecting communal taps before using them. All of them knew they had to cover themselves when coughing.

Even though many reported “normality” in their areas, they were attempting to resist this, showing leadership by staying at home unless it was necessary to get food.

Another person had led the marshalling of a supermarket queue, making sure that people had a trolley or a 1.5m space between them. The supermarket manager was restricting entry to the supermarket, but failing to manage the queue outside. This community leader had wanted to do the same at the pension payouts, but had been discouraged by the police. Instructively, her own street was very quiet, perhaps because she and her friends had gone door-to-door with leaflets in isiZulu and English, stopping to answer questions about how the virus is transmitted.

In a recent public statement, Minister of Human Settlements Lindiwe Sisulu opined that physical distancing was for the “middle class” and could not be practised in informal settlements. This is a very dangerous approach. From the quotes above, many residents are doing their best in very challenging circumstances.

But practical help is needed. The minister promised more water and more toilets. These should have been available before the crisis. They are now urgent. Some communities lack a regular supply of any water, so individuals pay for water rather than for the food and soap they badly need.

Sisulu’s approach is to move people out of informal settlements, justifying this on the spurious grounds that people cannot practise distancing and handwashing. But relocation is controversial and likely to lead to conflict, diverting attention from immediate problems. Also, it can break up settlement communities, nearly all of which have committees that could be mobilised to assist with awareness, sanitisation, distancing and distribution of food.

Heavy-handed use of police and army, like that seen in Alexandra, must be avoided because it reinforces divisions between the state and the public, undermining the capacity of activists to win key arguments they share with the government.

All the activists we interviewed want to participate as volunteers in stopping the spread of coronavirus. To do this they need to be provided with permits. They also require masks, gloves and sanitiser so that they themselves are not infected. Assisted in this way, community auxiliaries can be mobilised to marshal queues, map where the most vulnerable people live, help with basic education, distribute soap, sanitiser, gloves, masks and food, and, perhaps, assist with resolving disputes and, soon, with testing.

It is time for the state to overcome its scepticism about civil society participation in winning the war against Covid-19. A change in attitude is urgently required. DM

Bongani Xezwi is an NGO worker and community activist. Kate Alexander is a professor of sociology at the University of Johannesburg, where she is director of the Centre for Social Change. They were co-authors of Marikana: a view from the mountain and a case to answer.