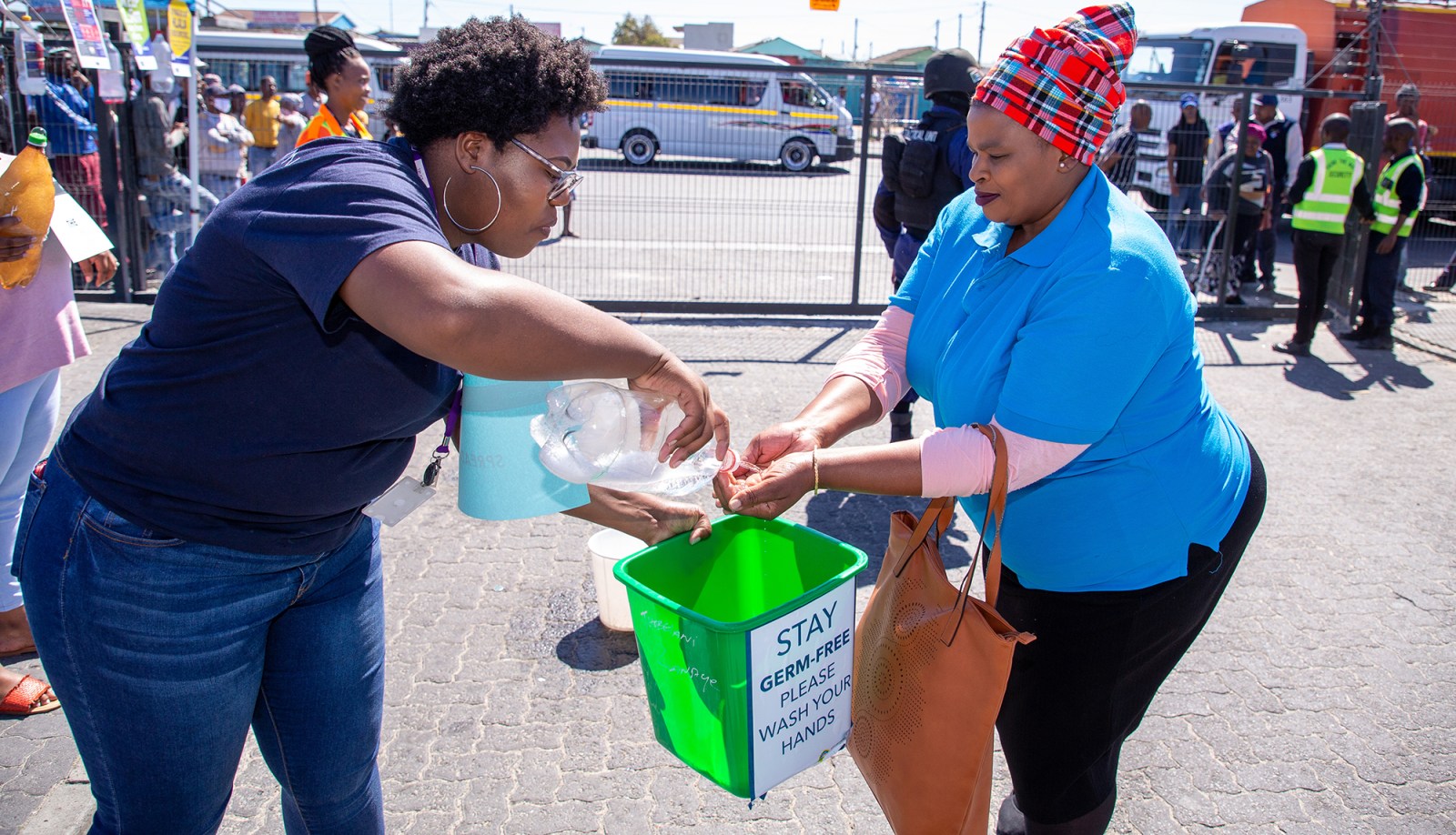 Shoppers wash their hands before entering a shopping centre in Makhaza, Khayelitsha. Photo by Roger Sedres

In just a few days, South Africa’s nascent Solidarity Fund has defined its reason for being, established governance partners, built governance frameworks, opened a bank account and, most importantly, initiated its first targeted intervention. It will be a powerful example of how South African society can collectively respond to a crisis.

Five million face masks, gloves and other protective clothing have been procured by the Solidarity Fund for public healthcare workers and those working within communities. The measure is a rapid response to gaps emerging in the system and will ensure the protection of workers in their efforts to prevent the spread of the Covid-19 virus.

The Solidarity Fund is an independent initiative, registered as a public benefit company and supported by business, civic society and government. It has raised R500 million to date, from government, business and, importantly, individuals, says Gloria Serobe, chair of the fund.

“This will be used to provide rapid, nimble and targeted actions to cushion the impact of the virus on the most vulnerable members of society, while at the same time uniting South Africans in the fight against the virus.”

Specifically, the key objectives of the fund will be to support the healthcare sector in its efforts to flatten the curve of infections; to provide humanitarian support to vulnerable households and communities who have been affected by the virus, and to mobilise a solidarity campaign that will unite the nation in the effort to see through the pandemic.

“Our job is not to replace but to complement the national effort,” says Serobe.

If this means rapidly procuring masks while the public sector fires up its more cumbersome procurement processes then its a job for the fund.

“We are focused not just on what we can directly fund, but on the role, we can play in co-ordinating efforts and better orchestrating the resources and effort across the private sector, civic society and government,” adds Nicola Galombik, executive director of investment firm Yellowwoods and part of the small team directing the fund.

Creating public trust in the fund is essential and, for this reason, the team, which includes Serobe, Galombik, Martin Kingston, executive chair of Rothschild & Co, and Adrian Enthoven, executive chairman of Yellowwoods, has emphasised the importance of governance.

“We will report regularly on the funds that come in and how they are spent. We will demonstrate radical transparency,” says Serobe.

Old Mutual has been appointed to administer the fund, while Edward Nathan and Ernst&Young are providing governance processes and procedures. An independent board is in the process of being appointed. “It will be a board that this country will be excited to see, with a combination of the skills we need — governance, community organisation, communication,” she adds.

What the fund will not do is provide relief to small and medium-sized businesses.

“The fund does not have the capacity to support SMMEs and is not directed at this goal,” says Kingston. “While the plight of small business is a critical and urgent issue that needs to be addressed, we are looking at business and government to respond to this distress.”

The funds that were committed by the Motsepe, Rupert and Oppenheimer families will not be channelled through the Solidarity Fund, and as such will be subject to separate governance and oversight processes.

“Those commitments were made in solidarity with the South African people; in response to a call for contributions from society to meet the challenges that we face,” says Enthoven.

“We are hoping that the resources that are mobilised, not just money but individuals’ time and business infrastructure will be many times the money raised. That is what is important.” BM