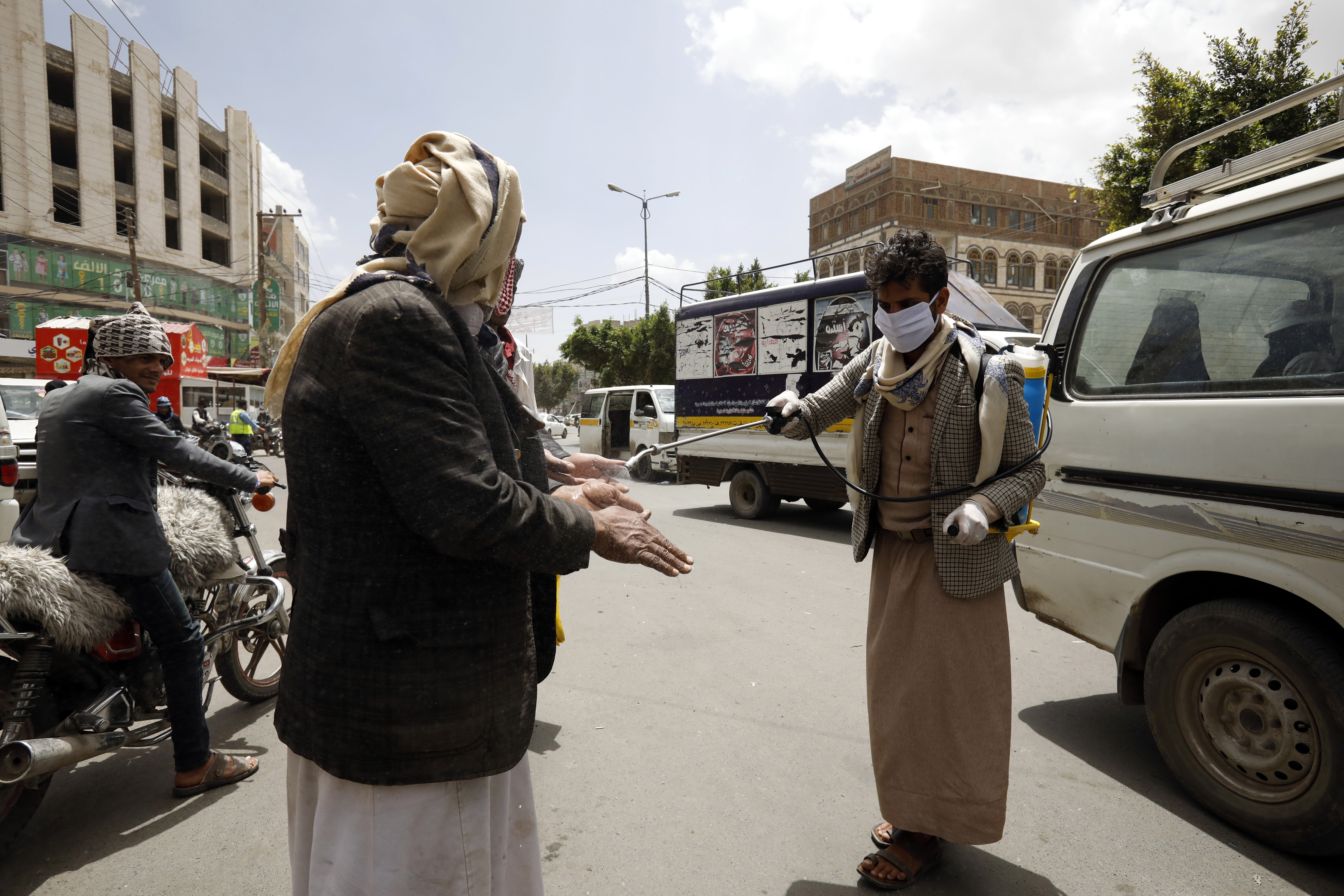 epa08329242 A Yemeni (2-R) wearing a protective face mask disinfects people hands in a street amid concerns over the spread of the coronavirus Covid-19, in Sanaa, Yemen, 28 March 2020. Yemen is taking increased precautionary measures to stem the widespread of the SARS-CoV-2 Coronavirus which causes the Covid-19 disease. EPA-EFE/YAHYA ARHAB

A number of sensitive sites including the presidential palace compound, a military school and an air base close to Sanaa airport were hit, and loud explosions were heard across the city, residents said.

The coalition said the operation was aimed at destroying “legitimate military targets including Houthi ballistic batteries which threaten civilian lives.”

Bombings in Sanaa city have been rare since September when Saudi Arabia launched indirect talks with the Houthi movement, which controls Sanaa and most of northern Yemen.

The warring parties had also welcomed a U.N. call for an immediate truce to help fight the coronavirus outbreak on Thursday.

But fierce battles have resumed in al-Jawf and Marib provinces since last month as the Saudi-led coalition resumed air strikes against several towns and villages.

And on Saturday Saudi Arabia said it intercepted two ballistic missiles, part of a drone and missile attack the Iran-aligned Houthis said they had launched towards Riyadh and southern parts of Saudi near the Yemeni border.

The recent escalation has shattered more than three months of calm in the five-year-old conflict. This had raised peace prospects after Saudi Arabia significantly reduced air strikes on Yemen and the Houthis halted missile and drone attacks on the kingdom.

On Sunday U.N. Yemen Envoy Martin Griffiths reiterated a call by the United Nations for an immediate cessation of hostilities to build momentum for a nationwide ceasefire.

“Yemen needs its leaders to focus every minute of their time on averting and mitigating the potentially disastrous consequences of a COVID-19 outbreak,” Griffiths said in a statement overnight, referring to the respiratory illness that thecoronavirus can cause.

Yemen has not recorded any cases of the coronavirus, according to the World Health Organization. (Writing by Aziz El Yaakoubi and Lisa Barrington; Editing by Catherine Evans and Timothy Heritage)