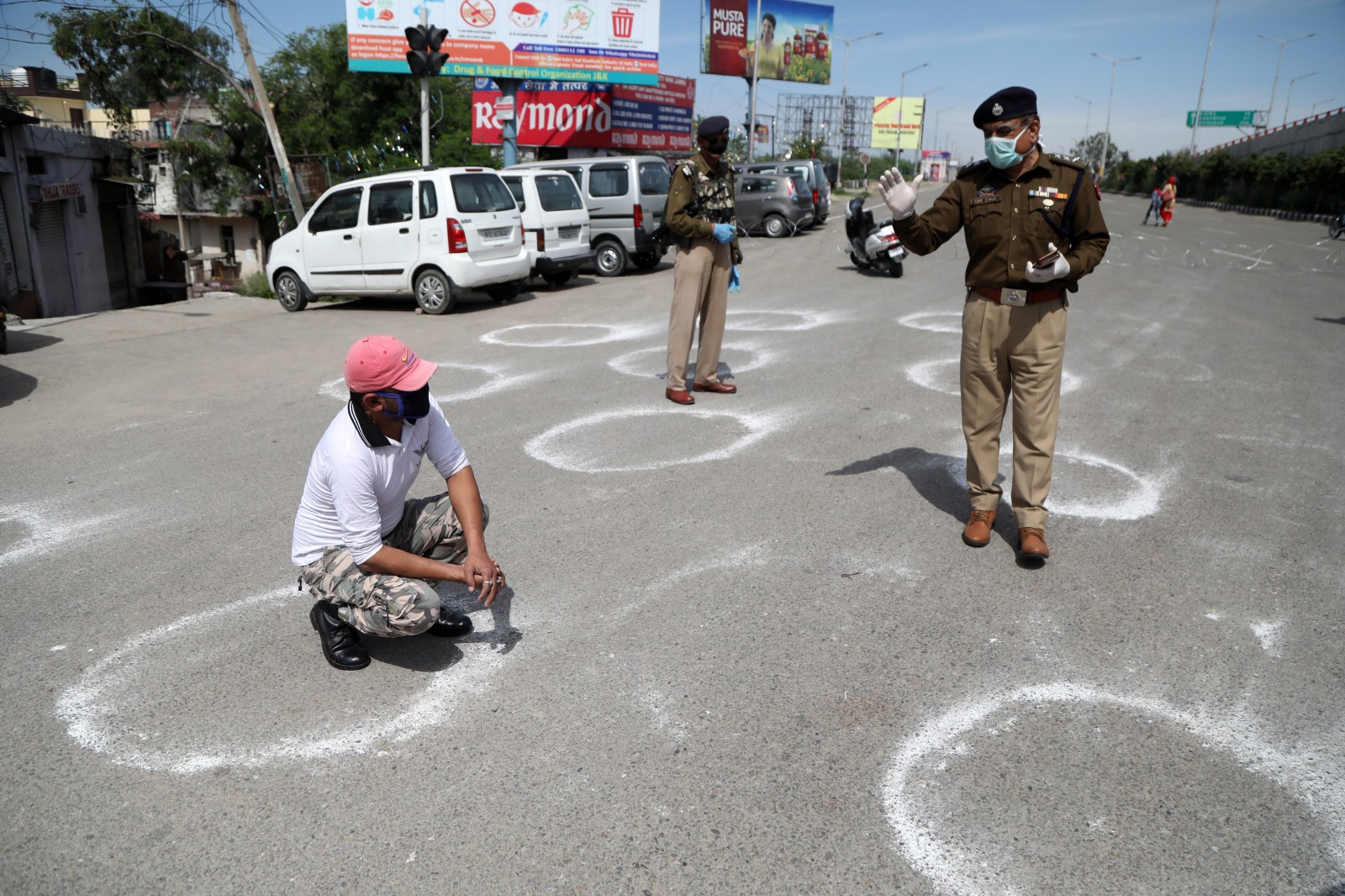 epa08323854 Jammu and Kashmir police officers force man to crouch inside a marked circle to maintain a minimum social distance after he allegedly violated Section 144 (gathering of more than three people) during a government-imposed nationwide lockdown as a preventive measure against the Covid-19 disease caused by the SARS-CoV-2 coronavirus, in Jammu, Indian, 26 March 2020. Jammu and Kashmir reported a first Covid-19 death after a 65-year old patient, who had been tested positive before, died at a hospital in Srinagar. There have been over 600 confirmed coronavirus infections throughout India and 10 deaths so far. EPA-EFE/JAIPAL SINGH

NEW DELHI, March 26 (Reuters) - India's death toll from the coronavirus rose by six to 16 in the last 24 hours, as the government sought on Thursday to improve basic services to 1.3 billion people locked indoors to slow the spread of the disease.

Streets were silent across Indian cities and towns on the second day of a three-week, 24-hour shutdown, as people heeded Prime Minister Narendra Modi’s call not to step out of homes except in emergencies or to buy food and other necessities. Lines of people wearing masks formed outside small neighbourhood shops in Delhi and Mumbai, among other cities.

Trucks were stranded at state borders and public transport was cancelled. Police have strictly enforced the lockdown even though Modi said essential services would be maintained.

Ram Prakash, a shopkeeper in Delhi’s Nizamuddin area, said supplies of some essential goods had improved, although bottled water was still a problem. “We are still facing supply issues with a few things, but slowly things are getting better,” he said.

To ease the economic pain, the government announced a $22.6 billion stimulus plan that provides direct cash transfers and food security measures. The health ministry said the number of coronavirus cases had risen to 649 from 606 on Wednesday evening, of which 16 had died.

Health ministry official Lav Agarwal told a briefing on Thursday that the rate of increase in confirmed cases was falling, but he stressed that “the situation is evolving, we cannot begin to take the situation in a relaxed way.” The numbers are still tiny compared with those in China, Italy and Spain, for example, but health experts have warned that the world’s second most populous country faces a tidal wave of infections if tough steps are not taken.

Dr. Mike Ryan, the WHO’s top emergencies expert, told a Geneva news conference that with the lockdown in place, India had a window of opportunity to expand testing, surveillance and quarantine facilities and said its success in eliminating polio was an example of how it could work. “India got rid of polio by breaking it down to the village level. All the way through the system, it broke down the problem, it went after the polio virus district by district by district by district. And India won.”

India has tested 24,254 people as of Wednesday, according to the government-run Indian Council of Medical Research, a small number compared to the population. Only recently has the government authorized the private sector and some non-governmental research laboratories to run the tests for COVID-19, the disease caused by the new coronavirus. Some states announced they were releasing thousands of prisoners on parole.

The number of cases rose to 1,179 in neighbouring Pakistan with nine deaths, with most cases in Sindh province that is under a lockdown. But infections in Punjab, the most populous province, are picking up now, government data showed. On Wednesday, Pakistan said it was seeking a fresh $1.4 billion loan from the International Monetary Fund (IMF) to help it deal with the economic slowdown from the coronavirus. Pakistan is already on a three-year rescue package that began last year as the country of 208 million people wrestles with a balance-of-payments crisis.

In Nepal, authorities were trying to evacuate tourists stranded in different parts of the country due to a nationwide lockdown, bring them to Kathmandu and arrange to send them home, the government said. Shyam Thapa of the Himalayan Expedition company said about 125 foreign hikers were stranded at Lukla, the gateway to Mount Everest. “They are safe and have no problem,” Thapa told Reuters.

(Reporting by Stephanie Nebehay in Geneva, Gibran Peshiman in Islamabad, Aftab Ahmad in Delhi, Nupur Anand and Alexandra Ulmer in Mumbai, and Gopal Sharma in Kathmandu; Editing by Raju Gopalakrishnan and Mike Collett-White)