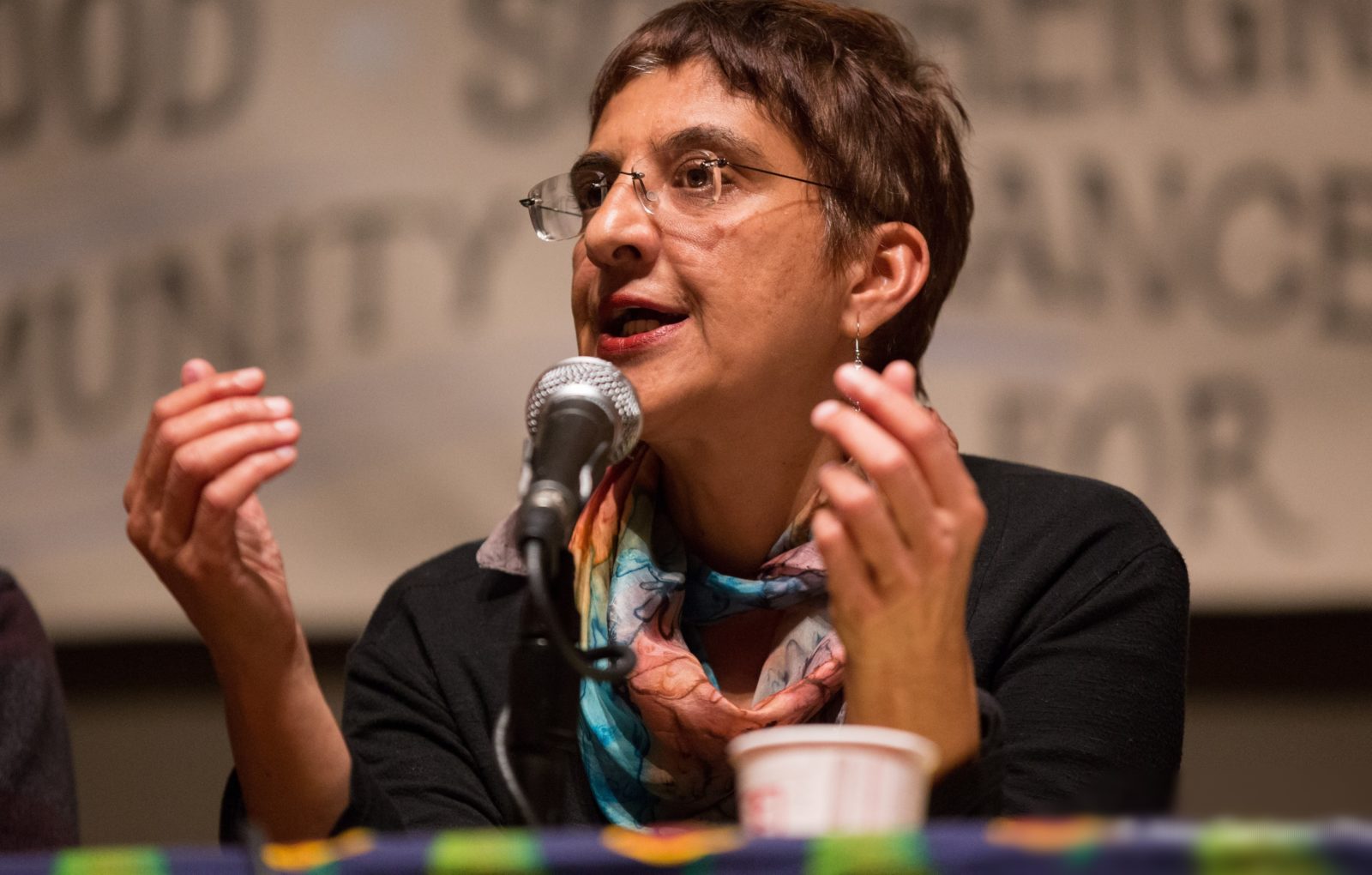 A ‘tyger’ and a fighter — Mariam Mayet is executive director of nonprofit The African Centre for Biodiversity. (Photo: Alex Garland)

Meet the fighter who believes in sacredness, also in people and planet before profits and in the possibility of carving out a new world even as we endure the crisis of Covid-19.

Fair warning: you should never poke a tiger and “not one with long claws”. It’s what Mariam Mayet says of herself in explaining the “tyger –with a y” that’s in her email address.

Mayet is the executive director of the African Centre for Biodiversity and is an anti-GMO, food sovereignty and food security activist. It was back in the mid-90s that she became aware of how South Africa was already “a protagonist in planting genetically modified GM crops” without widespread public consultation, knowledge or consideration for potential impacts on the environment and human health, she says.

“GMOs brought into sharp relief so many converging issues about inequality, the extent of corporate power and that our government was complicit,” says Mayet.

It angered the tiger; it was a slap in the face, really, from a democratic government that had emerged from a hard-won political struggle to be distracted from focusing on transformation “even just the basics of education, healthcare and transport”, she says.

Mayet, who grew up in a politically active community in Roodepoort, was bruised to find that the ANC government-supported GMO transnationals while putting at risk the majority of South Africans who consume maize as part of a staple diet. It was a political stance that would also carry the consequence of disadvantaging smallholder farmers in their right to produce and have access to better markets.

And so she started to organise, finding and working with other activists across the continent and around the world. The aim was to put up a fight against the growing tide of GMO crops being planted that were adding to industrialised food production, rampant extractive industries, deforestation and loss of biodiversity. It led to her setting up the advocacy and research nonprofit, the African Centre for Biodiversity, 16 years ago.

Fighting and taking a stand is for Mayet a kind of inherited outrage, growing up in a segregated South Africa. She recalls an incident when she was about six years old walking with her mother in Fietas (the name locals gave to the suburbs of Pageview and Vrededorp that supported a working-class, racially mixed community on the western rim of Johannesburg till it was declared a whites-only area in the late 70s) when police stopped a black ice-cream vendor and bundled him into a police van without a question asked.

“He was an older man and he was someone we knew in the community and I knew then that what they were doing to him was just not right,” she says.

In 1971 the loss of activist Ahmed Timol hit close to her community’s heart. Timol, a 29-year-old teacher, was detained, tortured and killed by Security Branch police who claimed he jumped to his death from the notorious John Vorster Square police station. Timol was a family friend of Mayet’s family.

Just as the inquest cases into the deaths in detention of the likes of Timol and other apartheid-era activists drag on even now, Mayet says there’s still a battle to wage to ensure that people have a right to healthy food, to protect their seeds, and to a better life that is not strangled by circuits of capital.

“Over the years we’ve managed to restrict and limit the commercialisation of some GMO crops. We as an organisation can do political analysis, share information, intervene, lobby and use litigation, but we have also had some failings and we have seen the likes of the anti-GMO groups representing Africa completely captured,” she says.

But reflection and failure are moments to reassess and to re-examine weaknesses, she says. Recognising fragility and fragmentation in social movements is not the moment to give up.

“We need to build from the ground up. The government won’t listen to NGOs or lefties, it will take mass public resistance and we should be sustained in our campaigns by the anger of on-going inequality,” she says.

She relates this too to the fight that’s still coming with Covid-19. It will put the most vulnerable people at risk. It’s also why she feels reluctant to be profiled when she says those at the forefront of stopping the virus should be receiving greater recognition.

“It will take the full might and effort of society,” she acknowledges, if we are to emerge from the pandemic wiser, stronger, maybe even kinder. It’s also time to hear the plangent wake-up call – the alarm ringing that the disruption and abuse of the “complex relationship between the collapse of ecosystems and human health” cannot continue and cannot be ignored.

“People feel that they have no choice right now, but another reality is possible and it’s up to us to decide what society we want to carve out and I certainly don’t want a future where the currency is toilet paper,” she says.

It’s a little light relief in the tense times of a South Africa entering lockdown. But Mayet, a mom to a young man who must inherit a better world, says some laughter always helps (even jokes and memes about the ridiculousness of hoarding bog roll). It’s also about building trusted relationships, finding inspiration by growing across networks, generations and countries. It’s also restoring a little sacredness to our daily lives, she says.

Sometimes that sacredness for Mayet is birdwatching or being in nature, that she calls a refuge. Sometimes it’s cooking mindfully – it could be chanting as she adds ingredients to a pot; keeping her kitchen spotless, or pausing to remember that food is not just grub. It’s culture, tradition and ritual. It is also what nourishes, connects and is meant to be shared. And when it’s offered and received with this sacredness, Mayet says it can also be a token of the resilience of the human spirit, of joy, hope and of love. DM/MC

Voices from PE townships on lockdown and Level 3

New app to help schools and businesses with health screening

Court orders municipality to to act on long-standing sewage problems