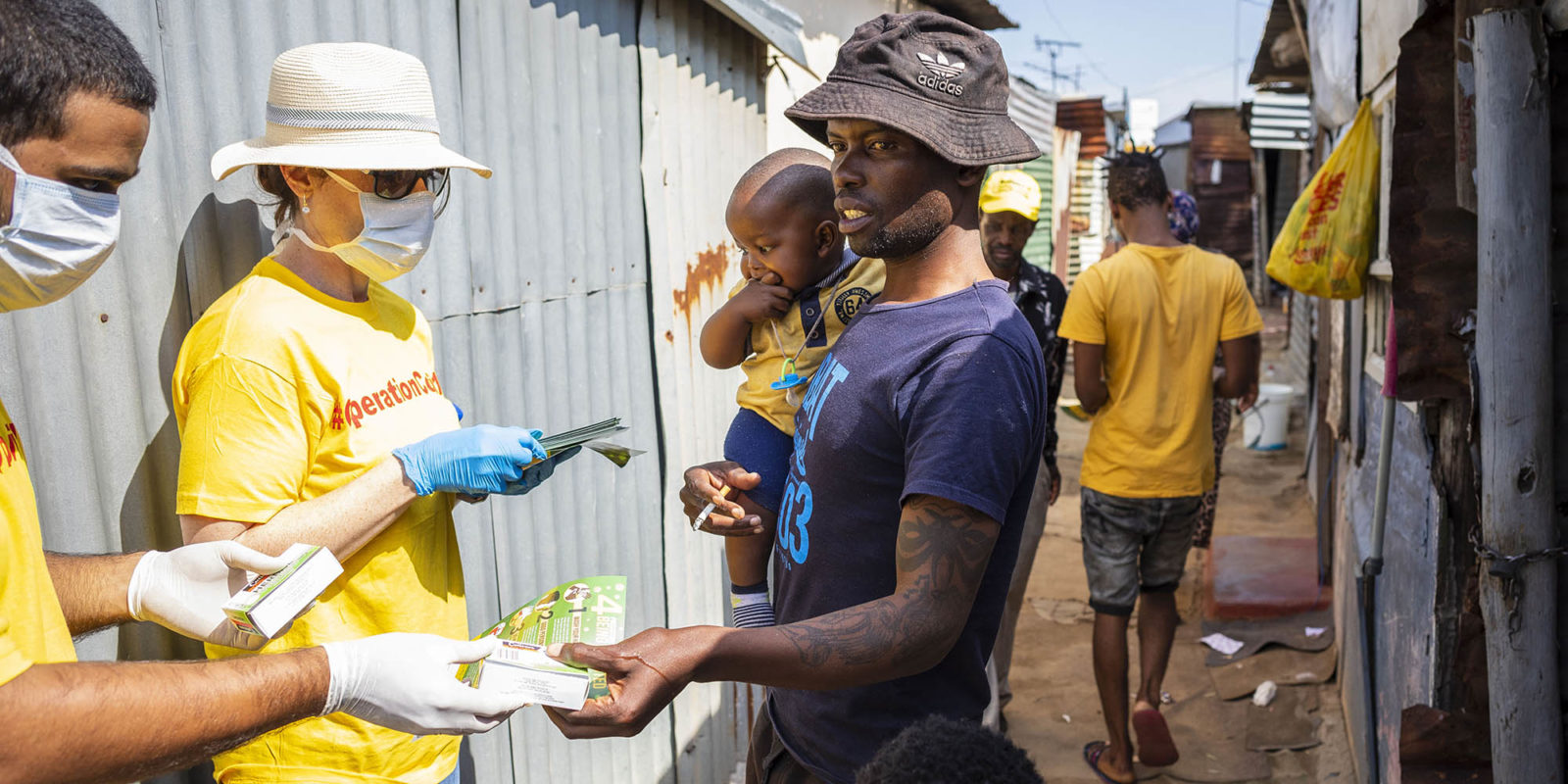 A volunteer from the Covid-19 Action Group hands out information leaflets and soap to residents of the Diepsloot Township in Johannesburg on 21 March 2020. (Photo: EPA-EFE / Kim Ludbrook)

During a media briefing on Tuesday, Human Settlements, Water and Sanitation Minister Lindiwe Sisulu announced that, in order to counter the effects of the lockdown on South Africa’s roughly 1.4 million informal households, a process of ‘de-densification’ would be initiated. The government has had decades to raise these communities up to the minimum levels dictated by the National Housing Code, so Sisulu’s address caused an uproar. It also created further questions about how the lockdown would impact on the country’s most marginalised populations, and how the spread of Covid-19 could possibly be stemmed in overcrowded communities that lack even basic sanitation.

Human Settlements, Water and Sanitation Minister Lindiwe Sisulu appeared to acknowledge that the historic nationwide lockdown, announced by President Cyril Ramaphosa on Monday, will have major implications on the lives of every South African, but none more so than the poor. The country’s inequities manifest themselves most obviously in crowded townships and in the informal housing that has sprung up in CBDs, hostels, rural shacks and peri-urban settlements. Often born out of violence and always out of necessity — but almost always designated as “illegal” — they are defined by poverty and a scarcity of basic services.

“What has been lacking in all the government communications about the shutdown so far is information for and about the most marginalised,” constitutional rights group Social Justice Coalition’s Axolile Notywala told Daily Maverick.

“De-densification is just a fancier word for forced eviction. People are not going to be able to fight this, as it will be happening during a national disaster. So it’s going to be very difficult to monitor these activities,” added Notywala.

Despite a progressive constitutional framework designed to protect South Africans’ right to adequate housing, and despite a state-subsidised housing programme that has, as the ANC likes to remind its critics, built over 3.2 million RDP homes since 1994, the informal housing phenomenon remains as pervasive as ever. According to best-guess estimates provided by Statistics South Africa, between 1.1 million and 1.4 million households, or between 2.9 million and 3.6 million people, live in what South Africa’s National Housing Code defines as informal settlements.

When the Ministry of Human Settlements briefed Parliament on its Upgrading of Informal Settlements Programme several years ago, it made some startling admissions. At the time there were more than 2,700 such communities nationwide, and that number has continued to grow. While the National Upgrading Support Programme provides technical support to municipalities for the development and implementation of upgrading programmes, there has been a vast disconnect between “aim” and “implementation”, largely because “sectoral co-ordination was found to be weak.

In many cases, neither municipalities nor communities are aware of the state funding available to them, nor do they know how to access it. Worse, local authorities are often extremely hostile to the emergence of these ever-growing insta-towns that occupy land with no due process.

As StatsSA further noted, “migrant households are more likely to live in informal settlements than non-migrant households”. The outbreaks of xenophobic violence in 2008, 2015 and 2019 were largely due to a battle for scant resources in overcrowded communities. These tensions continue to bubble away below the surface.

In other words, it doesn’t take a particularly astute scholar of human habitation to note that South Africa’s informal areas will be difficult to service during the lockdown.

During a press briefing on Tuesday, Sisulu stated that, in co-ordination with the Department of Co-operative Governance and Traditional Affairs, her ministry will provide services to public areas with limited or no access to water and sanitation. (This is presumably why Ramaphosa merged the departments of human settlement and water and sanitation in June 2019, even though he could never have anticipated the current crisis.) The ministry has identified 2,000 such sites countrywide. No specifics regarding locations have been forthcoming.

Nonetheless, according to Sisulu, efforts will include “communal water storage with water collection points, which will be filled by means of water carting in the interim”. There will also be hand-washing facilities in crowded spaces such as taxi ranks, a “health and hygiene campaign” and “interim containerised sanitation systems” (government-speak for porta-loos).

Sisulu failed to explain how people will be able to access these communal services when the lockdown confines them to their homes, except to say that the process was “under review”.

“Simply [the initiative] implies the reduction of the numbers in the small congested spaces that people are occupying at the moment,” he told Daily Maverick. “But it is not a crude movement, to such an extent that they lose what they’re already used to, such as school services.”

According to Nonceba Ndlebe, a spokesperson for the Khayelitsha Community Action Network who lives in the “Island” settlement in Makhaza, Sisulu is offering too little far too late. Ndlebe said that to date there have been no coronavirus education campaigns and no one from the government has visited the community. No hand sanitiser or soap has been made available to residents either. As far as ablution facilities are concerned, Islanders have access to 290 communal toilets, a situation which makes the lockdown not just compromised, but potentially moot. Residents of Ndlebe’s community are forced to walk well over a kilometre to the nearest water point.

“Some people have to wake up early in the morning to get water,” she told Daily Maverick. “Sometimes there is no water, or bad water pressure. We don’t have any basic [services] in this area.”

In order to confront these service delivery shortfalls, Sisulu’s department “has identified 29 areas of priority for de-densification in an effort to combat the spread of the virus”. As the minister noted in her press briefing on Tuesday, “We will need to urgently move some of our people for the de-densification to be realised. Land parcels to relocate and decant” — a verb more commonly associated with serving fine wine — “dense communities have been secured. This will not be far from the current place of residence. We appeal to our people to recognise that the threat posed by coronavirus in our informal settlements is real. It is, therefore, in their best interest to avoid this risk by co-operating with government as we relocate them to healthier and safer homes.”

This language appears to have been pulled straight from the apartheid forced-removals playbook, and it has been met with criticism from informal settlement organisations such as the Khayelitsha Community Action Network, along with NGOs and members of the legal community.

Organisations like Social Justice Coalition have been advocating for de-densification for almost a decade, lobbying the government to release buildings and unused parcels of land, both for housing and to make space to get in and build essential sanitation services in overpopulated township areas. The answer they consistently received was that there was none available.

“The answer was always, ‘there’s no space, we can’t move people to build toilets,’ ” said Notywala.

Making matters more complicated, as of Thursday, March 26, the South African Informal Traders Forum (SAITF) said in a press statement it had not yet been included in any of the government funding programmes planned to assist small and medium-sized enterprises while the country is in lockdown, nor had its members received an exemption to continue operating for the next three weeks, despite being a source of affordable food and basic supplies for millions of South Africans living in informal areas.

“We had to give orders to our lawyers to approach the [courts] to grant Informal Traders an exemption (to be allowed to trade) or, the Department of Small Businesses (sic) must include and consider a reasonable compensation during the lockdown period for our members,” SAITF said in its statement.

According to Alana Potter, director of research and advocacy at the Socio-Economic Rights Institute of South Africa, “There are all sorts of issues with relocating people — only some of which are economic. How far are they moving people? Are they safer where they are? How far are they from their own social networks? [With regard to the Covid-19 crisis] I haven’t seen a plan for implementation anywhere.”

The department claims to have earmarked the 29 densest communities by a number of measures, including the use of heat maps, a process that locates “hot spots” by measuring the emittance of energy due to human activity on the ground. This suggests that there has been little, if any, consultation with those to be most affected.

“I would say that the critical thing at this time — as always — is participation and voice,” said Jackie Dugard, an associate professor at the School of Law, University of the Witwatersrand. “Whatever actions are necessary to deal with Covid-19, the ‘beneficiaries’ should be part of the discussions. And it’s even more important than ever that marginalised people aren’t further marginalised,” she said.

The department insists that there has been consultation in certain communities, but the crisis mitigates their ability to talk as much as some would like.

“As for consultation, this is a state of disaster. It’s a question of making people understand what you’re trying to achieve. There’s a chance of very very great transmission of the virus. Right now, consultation needs to be directed at a specific outcome.”

In the efforts to contain Covid-19, density is only one problem. The other is lack of access to basic services.

Then there are the issues of enforcement. The SANDF has been deployed to assist the police with peacekeeping, but the trust between the authorities and residents of informal settlements is notoriously thin.

“Is there any way to do this without being brutal?” asked Potter. “Will they force people onto trucks?” The department insists that the moves will be orderly and without force, but again, there are no specifics.

In any event, for the lockdown to prove worthy, it will need to be followed by a more sophisticated process of testing, tracking and targeted containment. Again, that’s enormously difficult to pull off when almost four million South Africans don’t have an official address.

“We know that law enforcement becomes very violent during forced removals, even when there are people watching,” said Notywala. “So what will happen to people when there’s no one watching?”

According to epidemiologists, the coronavirus pandemic was inevitable. Informal settlements were not. By failing to address the latter, the government has potentially massively compounded the former. All South Africans will end up worse off for it. DM