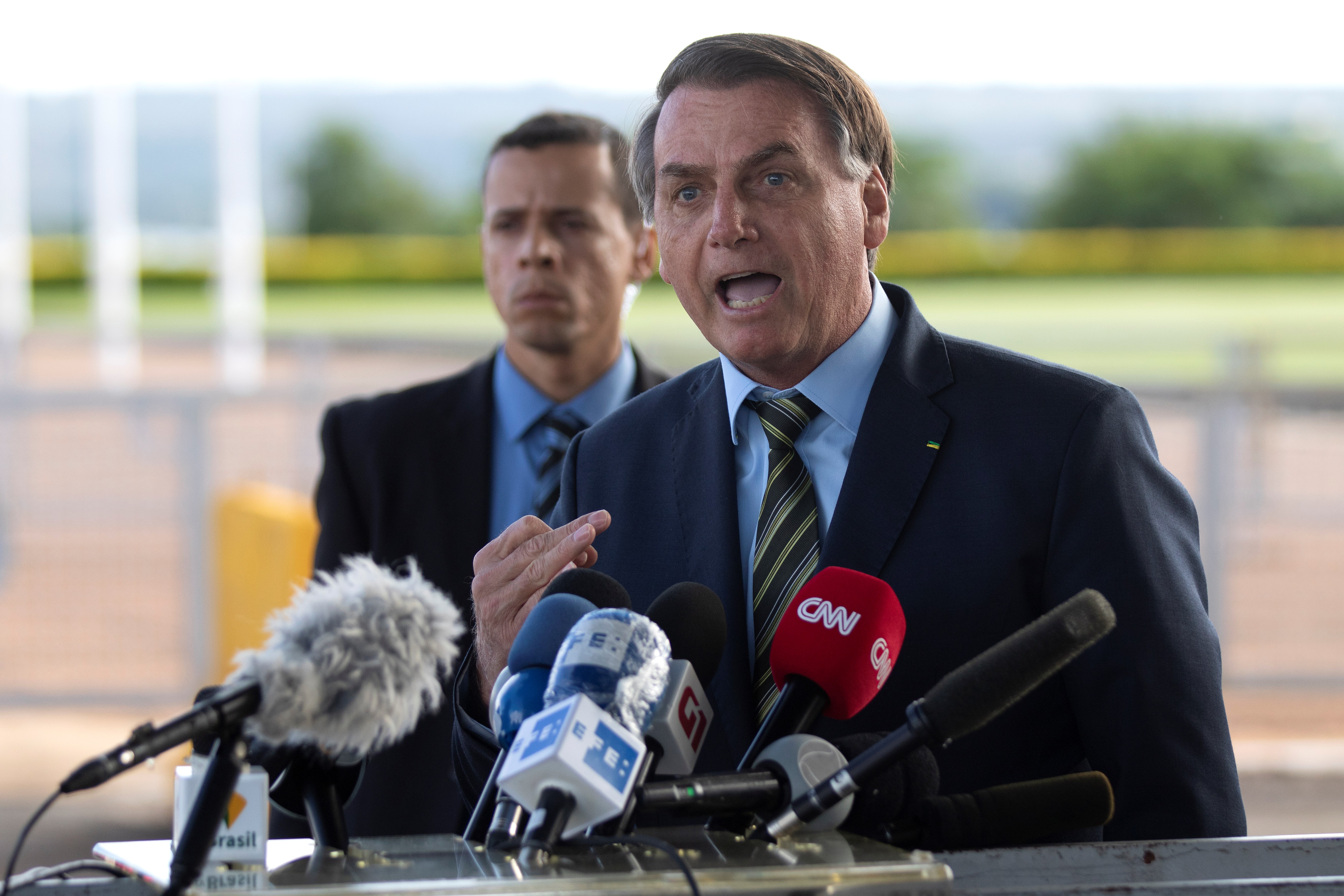 epa08316519 Brazilian President Jair Bolsonaro speaks during a press conference about the measures he will take to fight the coronavirus pandemic, from his official residence at Palacio do Alrorada, in Brasilia, Brazil, 23 March 2020. Bolsonaro published a decree to authorize companies to suspend their workers' contracts for up to four months without wage 'to face the economic effects' of coronavirus and to 'preserve employments'. EPA-EFE/Joedson Alves

BRASILIA, March 26 (Reuters) - Brazil's governors pressed President Jair Bolsonaro on Thursday for more federal support in the coronavirus battle after he blasted them as job-killers and undermined their orders with a decree keeping churches open at evangelical preachers' request.

Bolsonaro has increasingly echoed the view of U.S. President Donald Trump that jobs should be prioritized over restrictive measures to slow the outbreak, as world health experts suggest. “This wave of panic and hysteria is bigger than the virus itself,” he said on a Facebook Live broadcast.

But Bolsonaro did lobby on Thursday for a subsidy for Brazil’s poorest that was passed by the lower chamber of Congress later in the day. The subsidy is meant for informal workers and small business people and amounts to 600 reais ($119.46) per month for three months. The bill still requires Senate approval.

The amount was a significant increase over previous versions of the bill. The executive had initially pushed for only 200 reais before Bolsonaro modified his proposal.

Earlier on Thursday, in a public letter, Brazil’s governors argued that the federal government had not done enough to fund the fight against the virus that has infected about half a million people globally.

Confirmed cases in Brazil had roughly doubled in four days to 2,915 on Thursday, according to the health ministry, with 78 dead from COVID-19, the respiratory disease caused by the virus.

In the state of Rio de Janeiro, which relies on dwindling oil tax revenue to keep public services running, Governor Wilson Witzel said he may have to loosen an order closing businesses if the federal government does not offer aid.

“The people will only accept confinement if they’re able to eat. Business leaders will only pause activity if they have conditions for financing,” Witzel told Reuters. “I can’t ask people to go hungry.”

The governors’ letter listed eight proposed measures for Bolsonaro to take, such as suspending state payments to the federal government and helping states buy medical equipment.

Sao Paulo Governor Joao Doria, who campaigned alongside Bolsonaro in 2018 but has become one of his chief critics during the public health crisis, said he expected to see concrete federal aid measures implemented within 72 hours.

Bolsonaro is under growing pressure over his handling of the outbreak, which he initially labeled a “fantasy” and continues to characterize as “a little flu.”

Across cities, protesters have been banging pans in almost nightly protests, and Bolsonaro’s support is down in opinion polls, with Brazilians clearly favoring the governors’ response.

After Bolsonaro blasted some governors on Wednesday for the “crime” of shutting down businesses amid the outbreak, he undermined their efforts with a decree on Thursday exempting churches from closure orders, heeding requests from evangelical leaders, an important constituency for the president.

In Sao Paulo, the country’s most populous state, which has been most stricken by the epidemic, Doria recommended that churches close their doors for 60 days.