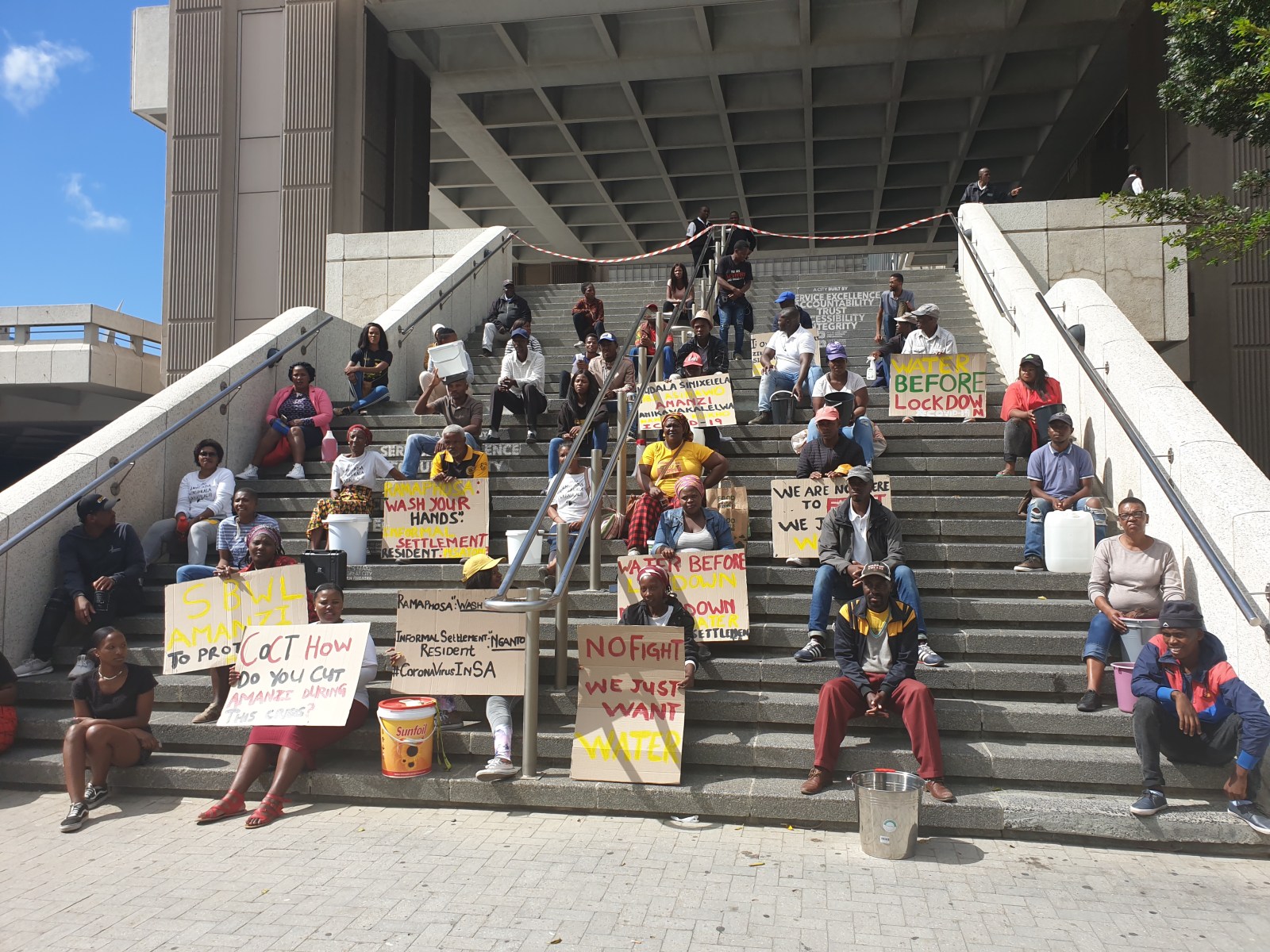 On Wednesday, about 40 people picketed outside the Civic Centre, demanding that the City of Cape Town immediately ensure that emergency water be made available to those living in informal settlements during lockdown which starts at midnight.

The group sang and danced while adhering to the one-meter distance rule as they waved placards that read: “Ramaphosa: Wash your hands” Informal settlement resident: “Ngantoni?” (with what?)”, “No fight, we just want water”, and “Water before lockdown”.

The demonstrators placed empty buckets on the steps leading to the entrance of the Civic Centre.

The protesters are part of the Khayelitsha Community Action Network, coming from Island, New Monwabisi, Qandu-Qandu, Site C and BM Section informal settlements. They said they live in fear of contracting Covid-19 because they do not have access to water in order to regularly wash their hands as prescribed by the World Health Organisation.

Nonceba Ndlebe of Island informal settlement said residents had lost faith in the City’s promises after Mayco Member Malusi Booi and other officials visited the settlement and made assurances. “The situation is still the same. We even followed up with calls. So promises don’t work for us anymore. All we want is water, right now. We have been knocking on the City’s door since 2017. It’s enough now.”

The group also released a statement which read: “We want to play our part in stopping the spread of the virus and we are doing what we can with what we have. We do not believe the City of Cape Town and the National Department of Water and Sanitation are taking the national disaster declaration seriously.”

“Even though there is a lockdown, water, sanitation and solid waste are considered as essential services. Our services will continue running over the 21 days, so if there are any complaints and issues, teams will be working as per normal. Residents can contact my office and we will dispatch the necessary teams,” she said.

Limberg said that the City had a mandate to service over 400 informal settlements across the City and was busy rolling-out more taps and toilets.

“There are new settlements that have formed over the last year and a half. Many have settled on land that is not appropriate for habitation, for example Island settlement is on a wetland. There are no services that can be connected for water, same with New Monwabisi. So for these areas, we are looking at installing infrastructure where possible,” she said.

Zukiswa Qezo of the Social Justice Coalition (SJC) asked, “Why do we have to come all the way to hear about your plans for our areas? Why can’t you call a community meeting, go on radio, and inform people about these things?”

Siyabulela Makha from Qandu-Qandu said, “The City must stop acting like they were thinking of us and our problems just because we are here in front of them. Children and a majority of people are at home now, but there is still no water.”

“Why did the City take so long to take action? Now they are scrambling because of the lockdown. We will still go back to our waterless informal settlements,” said Makha. DM