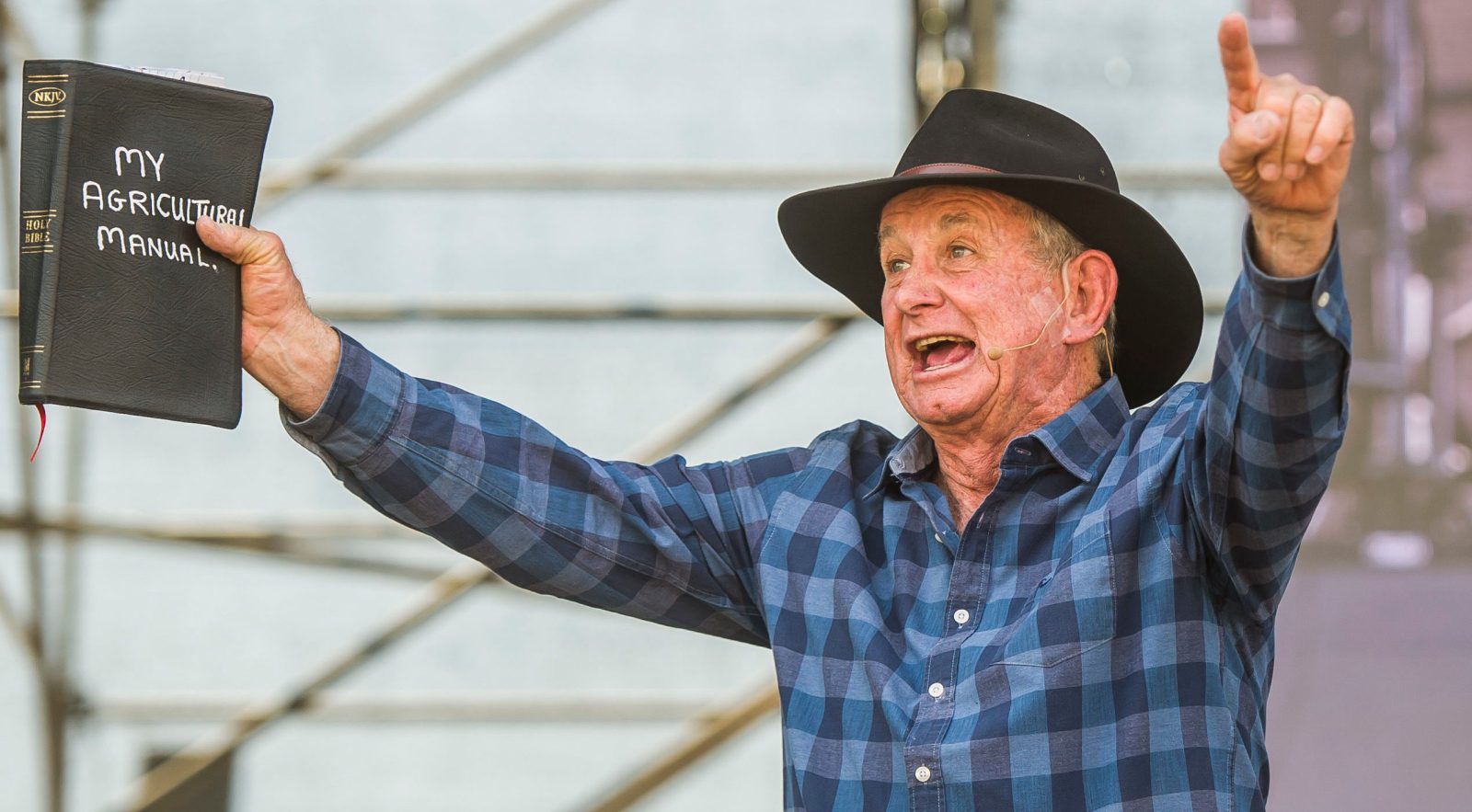 OCTOBER 27: Angus Buchan is seen on stage during the ‘Its Time Pretoria’ prayer event at Rhino Park airfield on October 27, 2018 in Pretoria, South Africa. The event, which was expected to be attended by millions of people, saw thousands from across the country who gather to pray for unity in South Africa. (Photo by Gallo Images / Netwerk24 / Deon Raath)

Congregations of three evangelical churches are being tested in a scaled-up screening to stop a cluster infection. This comes as the number of Covid-19 positive cases in the country has risen to 927.

As the renowned evangelical preacher Angus Buchan announced on Thursday, March 26 that he and his wife, Jill had tested positive for Covid-19, one of the five religious leaders who are believed to have travelled from the US, Israel and France and who tested positive in South Africa, was admitted to a Free State hospital with complications because he is also diabetic. He is in the isolation centre of the province’s Pelonomi hospital.

Buchan tested for Covid-19 after he attended a mass gathering earlier this month where ACDP Kenneth Meshoe was also a guest of honour. Meshoe then went on to a meeting of political party leaders, where President Cyril Ramaphosa was also present. Today, the presidency announced that Ramaphosa had been tested and was negative.

Buchan said this on his Instagram feed: “After speaking to my private physician this morning – who has been in contact with the laboratory that holds our results, we received greater clarity on our results. We had indeed tested positive for the Coronavirus. However, we are not showing symptoms and are in good health.

“As per the regulations surrounding the virus, anyone that has been in contact with us needs to isolate themselves and if they start to display symptoms, they would need to get tested for Coronavirus.” Buchan is a very popular evangelist. His annual “Mighty Men” religious gathering attracts about 400,000 people a year.

Mondli Mvambi, the Free State provincial health department spokesperson told Daily Maverick that after this outbreak, the provincial authorities had ramped up testing across three different churches as 40 Red Cross trackers mapped the spread of worshipers who have been exposed. There had been about 480 people at evening worship and of those, 255 had attended breakfast, and a group of 160 leaders had congregated for a dinner prayer session.  The Free State now has 49 positive cases.

All those people had been tested, but the mapping had also revealed that two other evangelical churches, Global Reconciliation Church and the World of Light, had members who had attended the fellow church.

Mvambi said there were some positive tests, but lots of negatives. In the tests announced on March 26, the Free State had 49 cases and Health Minister Zweli Mkhize said authorities were concerned that the mass gathering could become a cluster infection. A cluster infection occurs from a gathering and spreads quickly through a specific geography.

Mvambi said the two other churches had quickly spread the word about the possible infections and made facilities available for testing. As in the rest of the country, the Free State has ramped up testing with private labs working closely with the National Health Laboratory Services (NHLS) to ensure faster results.

As South Africa reaches the growth phase (the local transmission hump), of the Covid-19 outbreak, quarantine and hospital facilities are being prepared to cater for possible hospitalisations. The Free State has advertised for retired nurses, who are still credentialed, to return to service. “Many have expressed interest,” said Mvambi, adding that with high unemployment, “they are not scarce labour”.

Three additional hospitals have been identified and commissioned to cope with an expanded Covid-19 outbreak should the need arise: the Senorita Ntlabathi hospital, the Mantsopa TB hospital and the Albert Nzula hospital. Three resorts had been identified as quarantine sites. “We don’t want to depress people in quarantine with (dour) environments,” said Mvambi.

The gathering was held before Ramaphosa declared the State of National Disaster, but the spread does signal the wisdom of most major Easter services now being cancelled. Some evangelical churches who tried to go ahead with services last weekend were slapped with cease and desist orders in Gauteng last week as authorities know what a virus vector these gatherings can be.

In South Korea, over half of the infections are believed to have sprung from a single meeting of the Shincheonji Church of Jesus.

State laboratories jump from six to nine by April 2020

The NHLS said on Wednesday, 25 March that it would expand its capacity from an existing six laboratories to nine by next month. It also said that it had 18 state of the art machines which would improve volumes and turnaround times. It had over 180 “GeneXpert analysers” across all the provinces and test kits would arrive from the US in April.

The tests can be processed in 45 minutes, said CEO Kamy Chetty in a media release. The smaller machines were mobile which will be necessary as SA moves from imported infections to community infections – a much larger pool of infections.

The NHLS said it also had six mobile laboratories which had already been deployed. It is widely accepted that part of South Africa’s plan to flatten the curve of Covid-19 will require wider testing. “With all the sites functional, the NHLS has the capacity to process 5,000 samples in 24 hours,” said the NHLS statement. DM