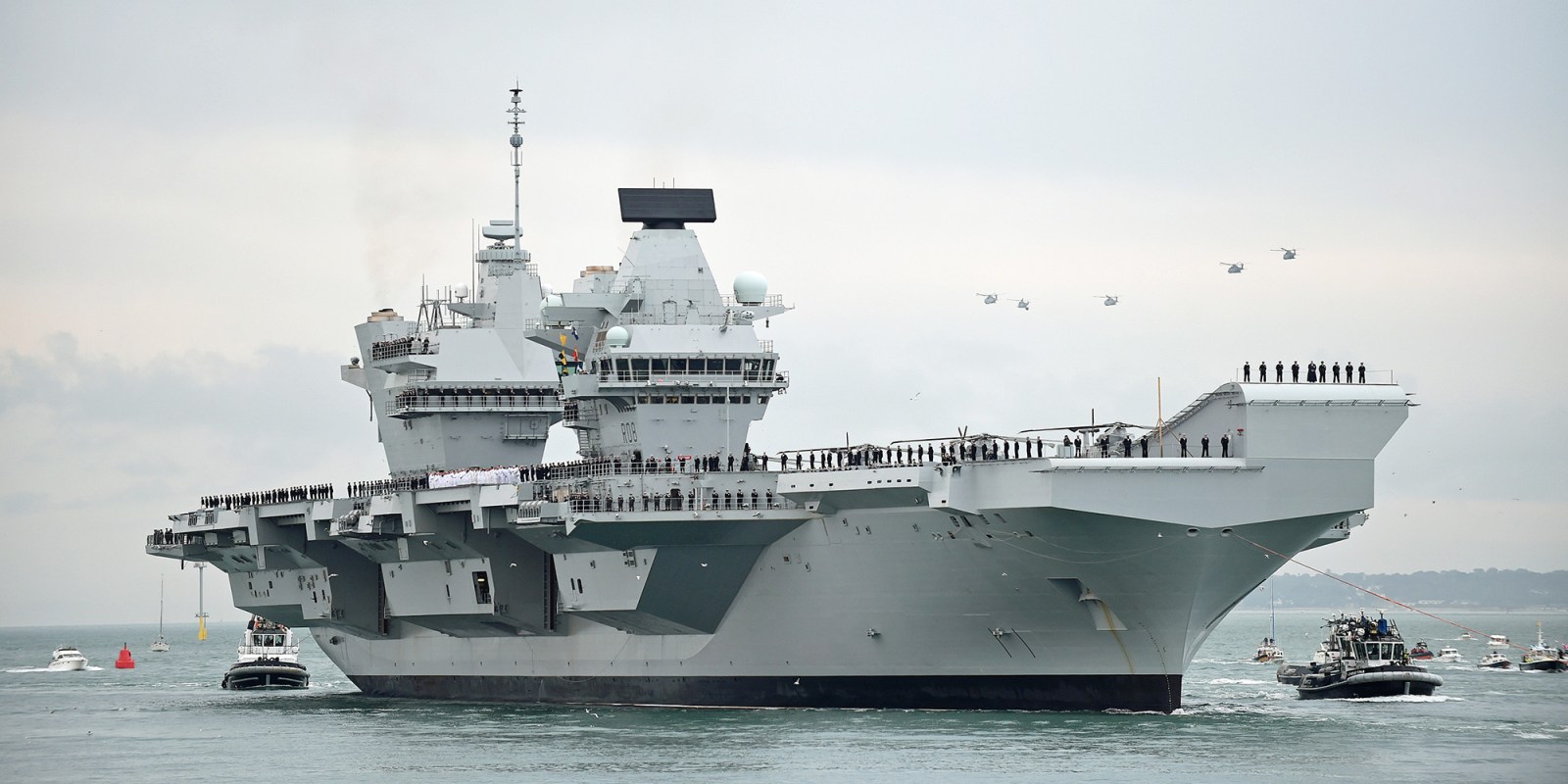 New analysis shows that Britain plans to spend hundreds of billions of pounds on expensive military projects while the UK’s under-funded public health system struggles to address pandemics such as Covid-19.

The British government will likely need to spend more than £200-billion over the next decade to fulfil its pledges on military procurement for equipment such as new nuclear-armed submarines, aircraft carriers and combat aircraft.

In addition, running and other costs for the Trident nuclear weapons system may reach up to £164-billion in the 40 years to 2061.

Military lasers, satellites for military use in space and offensive cyber programmes are among the other projects the British government has found money for in the so-called “defence” budget.

Many equipment items are designed for further military intervention overseas and are geared more towards “offence” than “defence” of the nation.

These spending commitments are being made when the UK’s National Health Service (NHS) lacks a range of basic equipment and staff to test and treat Covid-19 cases, and to address other health pandemics.

The British Medical Association warned on 5 March 2020 that “the crisis in NHS pensions, pay and capital funding has left the health service close to collapse”. It urged the government to implement “an urgent package of measures to increase investment”.

Yet the UK has spent in the region of £445-billion on the military in the past 10 years, amounting to around a third of its spending on health. In the recent budget, the government announced total public sector spending on defence of £55-billion and health expenditure of £178-billion.

The Ministry of Defence (MOD) proclaims in a recent publication that the UK remains “by far the largest NATO defence spender in Europe in absolute terms”. The UK is one of only three countries in the 29-member NATO alliance to spend at least 2% of GDP on the military.

The government has committed to raising the military budget by 0.5% above inflation annually during this parliament.

On 27 February 2020, when 16 Covid-19 cases in the UK had been detected, the government confirmed it planned to spend £181-billion on new equipment for the military over the next 10 years, including nuclear weapons, aircraft carriers and combat jets.

Even this level of spending will not be enough to purchase all the military equipment the UK has committed to buying, according to the National Audit Office (NAO), which has termed government plans “unaffordable”.

By contrast, days after the £181-billion spending confirmation, with the scale of the Covid-19 crisis becoming clearer, prime minister Boris Johnson announced just £46-million in UK aid to help find a vaccine for the disease.

Britain’s bloated military budget is illustrated by several of its spending commitments.

The military programme most widely criticised on grounds of either excessive spending or strategic necessity is the UK’s submarine-based nuclear weapons programme, Trident. The government states that the costs of building four new Dreadnought class submarines will be up to £41-billion by the early 2030s when they are due to enter service.

However, the NAO calculates that the subsequent running costs of the Trident programme will be around £135-billion up to 2061. Other estimates are higher. The Campaign for Nuclear Disarmament has calculated that the cost of replacing Trident over its lifetime could be as high as £205-billion.

Parliament voted to renew Trident in 2016, at a time when campaigners were warning about cuts to NHS funding.

The Royal Navy’s two new aircraft carriers, HMS Queen Elizabeth and HMS Prince of Wales, were initially supposed to cost £3.9-billion, but the final build cost spiralled to £6.2-billion, excluding the costs of the F-35 fighter jets on their flight decks.

The UK has already agreed to purchase 48 F-35s, but it plans to buy a further 90 of the aircraft in future. These are likely to cost an additional £10.3-billion at least.

Defence secretary Ben Wallace said in February 2020 that the UK’s “Carrier Strike programme”, as the aircraft carrier project is known, will “put the UK at the helm of 5th generation warfighting and cement the UK as a Tier 1 military power”.

The programme provides the UK with much greater offensive military capability. The MOD states: “Once fully operational, UK Carrier Strike Group will be a formidable force around the world”. Admiral Tony Radakin, the head of the navy, says it “will provide a potent, globally deployable carrier strike capability, a powerful conventional deterrent and the centrepiece of our country’s expeditionary forces”.

The MOD is spending up to £130-million on lasers, known as “directed energy weapons”, which “deploy high energy light beams to target and destroy enemy drones and missiles”. The programme includes developing “cutting-edge laser and radio frequency weapons which have the potential to revolutionise the battlefield”, the MOD says.

This expenditure is part of an MOD Innovation Fund worth around £800-million over 10 years “to pump prime investment into advanced new solutions such as laser directed energy weapons and unmanned rotary wing technologies”.

The MOD says that it’s spending £50-million over five years on a Space Programme.

Outside significant media scrutiny, the new RAF Strategy commits the UK to provide “full spectrum air and space power” in a “Next Generation Airforce”. Part of this strategy is to work with the US “to forge new frontiers in space”.

The MOD is partnering with Richard Branson’s Virgin Orbit and spending £30-million working with the US on the “military uses of small satellites”, as part of a strategy that sees space as a “war fighting domain”.

Announcing the plan last year, then defence secretary Penny Mordaunt said: “These small, low orbiting satellites can be sent into space more cost-effectively than their predecessors and can be fixed or replaced more quickly.”

She added: “The programme will eventually see live high-resolution video beamed directly into the cockpit of our aircraft, providing pilots with unprecedented levels of battle awareness.”

The UK has a National Offensive Cyber Programme, which aims for the UK to become a “world leader in offensive cyber capability”. Run jointly by the MOD and the UK’s largest intelligence agency, GCHQ, it is reported to have a budget of £250-million and a staff of 2,000.

Posited as defending the UK against terrorism and cyber-crime, it is known that GCHQ has conducted offensive cyber operations against at least one country, Argentina, with whom the UK is not engaged in hostilities.

The MOD is promoting “offensive cyber as central to modern warfare” and in May 2019 announced that it is spending £22-million on army cyber operations centres, which will also “dispel misinformation”, involving the 77 Brigade, the army’s information operations unit.

Penny Mordaunt announced that this would amount to “putting the army at the forefront of information warfare… to give the army the competitive edge across all environments”.

The UK is spending £100-million over five years in Eastern Europe to “counter Russian disinformation”. The MOD is a partner in the Foreign Office-led “Counter Disinformation and Media Development Programme”, which the government claims will promote “a free, varied and wide media landscape” in the region.

But the project is also based on the premise that “the UK is recognised as a world leader in impartial and independent media”. In fact, the UK ranked 33rd on a recent international press ranking, below many other Western European countries and below three states in Eastern Europe itself.

Declassified recently showed that the UK is spending £141-million on its sprawling network of foreign military bases and that, for the same price, Britain could more than double its supply of medical ventilator machines, which are critical to help victims of Covid-19 continue breathing if they are hospitalised.

Britain has one of the largest networks of offshore garrisons of any major power, with most dating back to colonial times. More than half are in countries that are run by repressive regimes. Many bases are located in areas of strategic importance to British oil companies, despite climate change being another serious threat to the UK public.

The government’s planned military spending comes on top of expensive wars in Afghanistan and Iraq that have killed hundreds of UK personnel as well as hundreds of thousands of Iraqis and Afghans.

The war in Afghanistan was estimated by the government in 2015 to have cost £21.3-billion. However, some independent estimates are much higher, reaching as much as £37-billion for Afghanistan alone.

Mark Curtis is the co-founder and editor of Declassified UK. He is an historian and author of five books on UK foreign policy. He tweets at: @markcurtis30