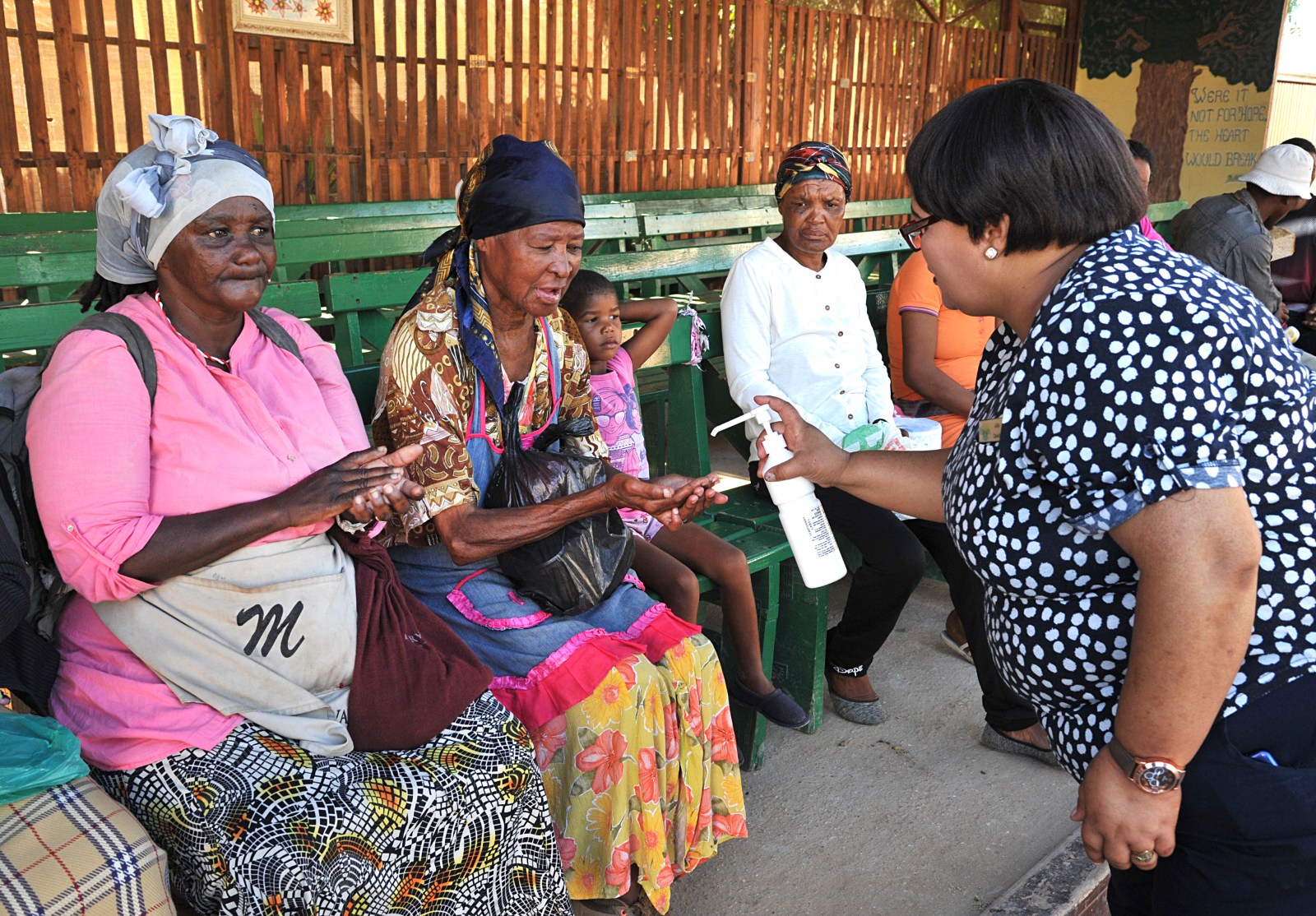 Operations staff at Missionvale Care Centre's soup kitchen are continuing for now. Volunteers are wearing masks to protect themselves and hand sanitiser is distributed to everybody to clean their hands. (Photo: Mike Holmes)

As long queues snaked around shopping centres and stocking up was the order of the day, volunteers and civil society organisations were trying to find a way to provide nine million children and several million adults who live below the breadline with a nutritious meal every day and keep them healthy enough to survive the Covid-19 pandemic.

At 6am, people start to arrive at the Missionvale Care Centre in Port Elizabeth for their daily meal. It is still dark but the thousand people who are fed here every day have done it many times before.

First they line up with their tins. The centre exchanges recyclable materials for a food token. In the other hand most have a battered margarine container or a 2 litre ice-cream tub and a neatly folded plastic bag.

They come early because there is a very real fear that the food will run out.

At the gate they are scanned with a thermometer. There is relief when they are allowed in.

Their hunger is greater than fear of a virus. While they wait they sing hymns together and wash their hands.

The Missionvale Care Centre still feeds a thousand elderly people a day. “We do not have an option to stop,” Linda van Oudheusden said. “We have to carry on. Hunger doesn’t stop. People need to eat to be able to take their medication for HIV and TB. It is critical that we keep our doors open. We have 1,000 people who go through our gates every day.”

With fears of how the lockdown will impact on the service, Oudheusden said they are drawing up a plan of action. “These are extraordinary times. I will know by tomorrow what our plan of action is. We are trying to find ways to still get the food to the people somehow but naturally have to obey lockdown laws too,” she said.

Many of the soup kitchen’s beneficiaries are elderly and several share the bread and soup they are receiving with grandchildren.

Recently, as the school nutrition scheme was stopped with the closure of schools countrywide, the centre introduced a separate nutrition programme for children.

As a safety measure they have started scanning everybody’s temperature at the gate. “Anybody with an elevated temperature is taken to the onsite clinic,” Oudheusden said. “We have stopped the long lines but trying to give people times to come get their food. We have created handwashing stations.”

Staff who are dishing out soup and bread are wearing masks.

People pray over their food, often sit down to eat a little bit and then leave to walk back home.

“Hunger is a force greater than fear,” she said.

At Auntie’s Soup Kitchen in Walmer township, the local clinic is giving out masks to protect those who are coming to fetch food. There are not many taps around. “We use soap and a bucket. It is not easy for people here to wash their hands,” Julia Mbambo said. “There are about 200 people who come here each day. We are their only meal. As schools closed the soup kitchen also started feeding children.

As fears grow that these and other nutrition programmes like these will be stopped after President Cyril Ramaphosa announced on Monday 24 March that South Africa will be in lockdown for 21 days starting at midnight on Thursday, the Minister of Social Development, Lindiwe Zulu, was quick to reassure the public that they will make a plan.

“We have not concluded all the systems that we will be using, but we will not stop the nutrition programmes,” she said during a press briefing. “We want to give everybody the necessary support.  Several organisations have raised their serious concerns over the safety of their trucks but we are working with the police to address this,” she said. “We can’t afford to leave our people without support,” she said.

In a statement following the early closure of schools the Minister of Basic Education, Angie Motsheka, said “The concern [over the suspension of the school nutrition program] is valid however schools were due to close anyway on Friday so parents and guardians were always going to continue with their responsibilities over their children. The nutrition provides meals to learners in school. We are working on revising the school calendar to ensure that the 10 days are recovered so that nobody is compromised in any way.”

Meanwhile several organisations have called on the public to assist them to either continue feeding school children or adults who are struggling due to the Covid-19 lockdown.

In a joint statement issued by several civic organisations, trade unions, organisations of informal workers, faith-based organisations and community structures in South Africa, called for all households including the homeless to have access to food.

“If we are to stay at home during this time, access to nutritious food is fundamental. The absence of the School Nutrition Programme is devastating. A coordinated and safe rollout of food packages directly to distribution points in food-stressed neighbourhoods must be implemented. Failing that, the child support grant must be augmented. Support for locally-organised food systems must be strengthened,” the organisations’ action plan reads.

The Peninsula School Feeding Association said in a statement that they will continue to provide ingredients for daily meals to be prepared and served to learners at various community kitchens in the greater Cape Town area and asked the public to assist with small donations of money.

Andy du Plessis from Food Forward SA said they will expand their footprint to include the entire country. “We are in the process of scaling up our operations. We are talking with government, retailers, manufacturers and farmers about food provisions for the next six months to our most vulnerable groups”, he said.

“We are assisting vulnerable rural communities across the country, as well as prioritising our most vulnerable groups. These include the aged, orphans and vulnerable children, people living with HIV/Aids, TB patients, and making sure that community kitchens have enough food provisions. Providing optimal nutrition is critical in maintaining a strong immune system at this time. We are raising food and funds to be able to provide more food to our community kitchens, and fast-tracking new applications that focus on small children, school-aged children etc. where they can access a meal. We are also putting plans in place to help provinces where we currently do not have a physical infrastructure.”

On Tuesday 24 March Food Forward SA launched a R50-million appeal to assist them in feeding vulnerable people during lockdown. The organisation believes that there are 14 million people in South Africa who go hungry daily and another 14 million who are at risk of not accessing enough food.

They assist facilities and centres for the aged, orphans and vulnerable children, people living with HIV/Aids, disabled people, the homeless, as well as vulnerable women, providing optimal nutrition is critical in maintaining a strong immune system at this time.

“FoodForward South Africa is launching a special R50-million appeal to be able to scale and provide critical food provisions to our most vulnerable groups across the country. We need your help. As we intensify our efforts to provide nutritious food to those who need it, we need food provisions as well as finances.”

Du Plessis explained that FoodForward SA recovers quality edible surplus food from the consumer goods supply chain and distributes it to community organisations that serve the poor. More than 80% of the food recovered is nutritious.

The NPO, Mould Empower Serve (MES), an organisation looking after homeless people in South Africa, said they were very worried that the homeless community was not aware of the crisis.

“They often include elderly people and very young children, and some are people living in conditions of utter desperation that make them vulnerable to a myriad of illnesses. MES faces the real tough choices of whether to quarantine the people they serve, the challenge on how to protect staff and volunteers, or whether to shut down operations completely until the pandemic subsides, MES CEO Leona Pienaar said. “It is organisations like MES that operate in the inner cities across the country whose mission it is to support the homeless and the destitute who are taking the initiative to answer these critical questions,” she said. Pienaar added in a statement that they will continue to provide nutritious meals and where possible food parcels will be distributed instead.

“Our aim is to keep the immune system boosted for the most vulnerable,” she added. She continued that since schools have closed they were providing cooked lunches to children to ensure their immune systems are boosted.

She said they were looking for members of the public to sponsor healthy fresh food or food that doesn’t require much preparation like instant soup, two-minute noodles, dried fruit, nuts and oranges and hand sanitiser. DM