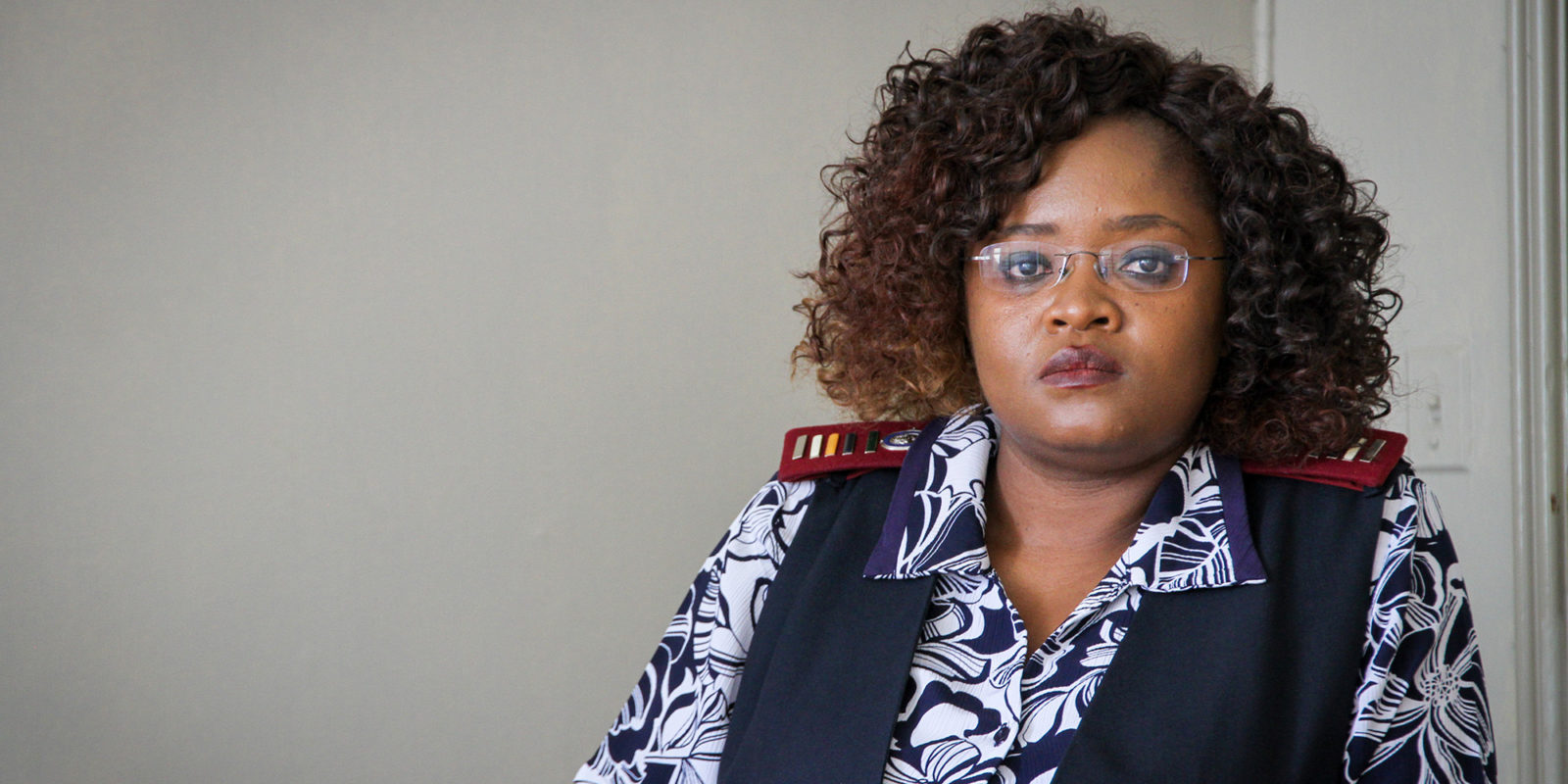 As the South African Department of Health confirms over 500 positive cases of Covid-19, the country’s ability to manage the virus becomes a growing concern. With limited resources and a dysfunctional public healthcare system, medical staff have their work cut out for them. Young Nurses Indaba Trade Union has expressed concern over the lack of training and protection made available to nurses and community healthcare workers.

On 22 March,  before the announcement of a planned nationwide lockdown, Gauteng’s Department of Health announced new measures to reduce the spread of Covid-19. The new restrictions focused mainly on public healthcare facilities in the region which has the highest number of infections. At the time of the announcement, Gauteng had 132 confirmed cases. With the number of infections expected to grow, community healthcare workers remain among the most vulnerable to excessive exposure.

Some of the restrictions announced by the Gauteng Department of Health include cancellation of all elective surgeries and health events. The Department has also restricted visitation allowing only two visitors per patient. And, in an effort to reduce interpersonal contact, patients are advised to use Peleboxes to collect their medication.

Despite the new restrictions, community healthcare workers say they remain highly vulnerable and unprepared to deal with the spread of Covid-19.

For a long time, nurses have felt their calls for equal treatment have fallen on deaf ears. This time, says Fikile Dikolomela-Lengene, has been no different.

Dikolomela-Lengene, who is the first Deputy President of the Young Nurses Indaba Trade Union (YNITU), expressed concern over the preparedness of nurses and care workers who, according to the union, have been left out of planning and training for Covid-19 management.

“The issues that led to YNITU being formed was the shortage of staff, patient’s complaints, the crisis that nursing is under currently,” says Dikolomela-Lengene.

Dikolomela-Lengene says the conditions plaguing nurses and community healthcare workers before the outbreak of Covid-19 were already untenable.

“It cannot be normal that one midwife has to deliver five babies. In ICU, one nurse has to look after three patients. While we know those areas are specialty areas that should be one nurse to one patient. That has actually compromised the nursing profession.”

Dikolomela-Lengene says these challenges that nurses face in public healthcare employment have contributed to the increased cases of negligence and malpractice over the years.

The 32-year-old nurse works at Stretford Clinic in Orange Farm, 45 kilometres from Central Johannesburg. She says she sees close to 150 patients a day. Each consultation requires her to perform multiple functions depending on her patients’ needs.

Spokesperson of Democratic Nursing Organisation of South Africa (DENOSA) Cassim Lekhoathi echoes Dikolomela-Lengene’s concerns, stating that while there have been calls for retired nurses to assist in the efforts to treat Covid-19, there are young nurses who have been unemployed since completing studies and training.

“Prior to the coronavirus, the health system was grossly understaffed. And with the coming of the coronavirus, it doesn’t take a rocket scientist to know that you need more staff,” says Lekhoathi.

Lekhoathi says in his communication with members of DENOSA, he has only heard of one case where nurses have received some form of training to deal with Covid-19. He also says that along with understaffing, the health system is still at the mercy of infrastructural and equipment deficiencies.

“People have not been prepared in terms of training and protective gear,” says Lekhoathi.

Catherine Modise was among the numbers who answered the national call to offer HIV counselling and testing services in an attempt to reduce the number of new transmissions and improve adherence to treatment. Her role is crucial to the country’s healthcare system and efforts to prevent the spread of disease.

“We lessen the load for nurses because they don’t have the time to counsel patients and test them and then also counsel them after the testing,” says the 50-year-old HIV Testing Services Lay Counsellor.

“They are dealing with diabetic people, people with hypertension, all the different illnesses. So it will be difficult for a sister to sit down to consult that patient and then after giving them medication, because there is also a shortage of nurses.”

Despite the valuable service, Modise provides to the South African healthcare system, she has to contend with surviving on a R3,500 monthly stipend.

“When month-end comes I even get frustrated because I don’t know what to do with that R3500. My husband is not employed so I am the sole breadwinner,” says Modise.

“We don’t have benefits, we are not permanent. We’ve got nothing. We are not recognised [by government] but we think that some people do recognise us. They know that if we are here, life is easier.”

Since Modise’s position does not come with benefits and a living wage, in the event that she falls ill, her medical costs are hers to bear. And with the local outbreak of Covid-19, Modise’s work positions her at the front line of dealing with potential cases of the virus. A risk she is neither financially ready for, nor by virtue of skills. Despite Minister Zweli Mkhize repeatedly claiming that South Africa is ready to deal with the outbreak, the realities on the ground  look different.

“We don’t have PPE [personal protective equipment] or masks. No one came to train us on how to deal with this virus,” says Modise

On the other end of Gauteng, in Vosloorus, 36-year-old pediatric nurse Mfanelo Sicina says, for a number of reasons, he and his colleagues are not prepared for the battle against Covid-19. He says when he first realised that South Africa would be dealing with a growing number of Covid-19 cases, he examined the situation at Thelle Mogoerane Regional Hospital, where he works.

“Those people working in casualty are the first line of defence and it’s a disaster. There are no hand sanitisers there and it is overcrowded,” says Sicina.

While the hospital has not recorded any cases of Covid-19 yet, Sicina says the hospital would be compromised in the event of a case of infection.

“If coronavirus makes it way to public hospitals, it would be hard to contain,” he says

As the number of cases grows by the day, Sicina says he fears what implications the spread of the virus will have on the nation.

“To tell you the truth, as far as coronavirus containment is concerned we are hopeless. Don’t blame management, don’t blame nurses, it’s our [public health] system,” he says.

“N95 masks are out of stock and those are the ones that are effective at protecting us from coronavirus. The stock is so low that if the virus was to [grow], our stock would be finished within a week.”

On 14 March, South Africa repatriated 114 of its citizens from Wuhan in China, where the coronavirus first struck. On the same day, the National Department of Health reported a total of 38 confirmed cases of Covid-19 — a significant increase after the first case was confirmed just nine days prior. A week later, the number of confirmed cases has increased by 364 new cases.

Although the number of confirmed cases grows daily, it is of significance to note that of the 12,815 tests conducted by the National Department of Health, 12,413 have come back negative.

In a briefing with the South African Medical Association (SAMA) on 19 March, Dr Zweli Mkhize asked that the association work with the government to slow down the transmission rate.

“The bulk of [Covid-19] patients will meet SAMA members. It is us at this level as professionals who must be very strong,” said the Minister.

SAMA had previously expressed concerns saying that South Africa does not have the capacity to contain an outbreak of Covid-19. And while the Minister previously asserted that South Africa was ready to deal with Covid-19, he admitted that there were a number of weak links in the efforts to curb infections.

Mkhize estimated that the number of infections would grow with between 60% to 70% of South Africans being affected by the virus.

This, he said, was exacerbated by the fact that tracing people who had come into contact with patients who test positive for the virus would be difficult. Mkhize added that the Department had employed close to 2000 tracers to aid in tracking down potential cases of Covid-19.

For Primary healthcare providers who might come into contact with affected patients, their vulnerability is deepened by the deficit of medical resources.

“In the isolation ward it is clear [that] you need protective gear and the whole kit,” said Mkhize.

Mkhize also noted that the living conditions of the majority of South Africans put them at a disadvantage when it comes to preventing the spread of the virus. For one, the cost of testing for the virus is high and unaffordable for most working-class South Africans.

South Africans who live in rural areas bear the added challenge of commuting to healthcare facilities being unaffordable as well, said Mkhize. And for many, self-isolation would be impossible, he added.

“We need to start providing for people to be moved from their normal settlements to quarantine areas,” said Mkhize.

Meanwhile, community healthcare workers like Dikolomela-Lengene, Modise and Sicina remain in the dark as to when the necessary action will be implemented in the communities they serve.

Daily Maverick had not received comment from the Department of Health about nurses and community healthcare workers training and equipment concerns at the time of publication. DM