Wanted: Cool heads and calm moral authority in a time of global crisis 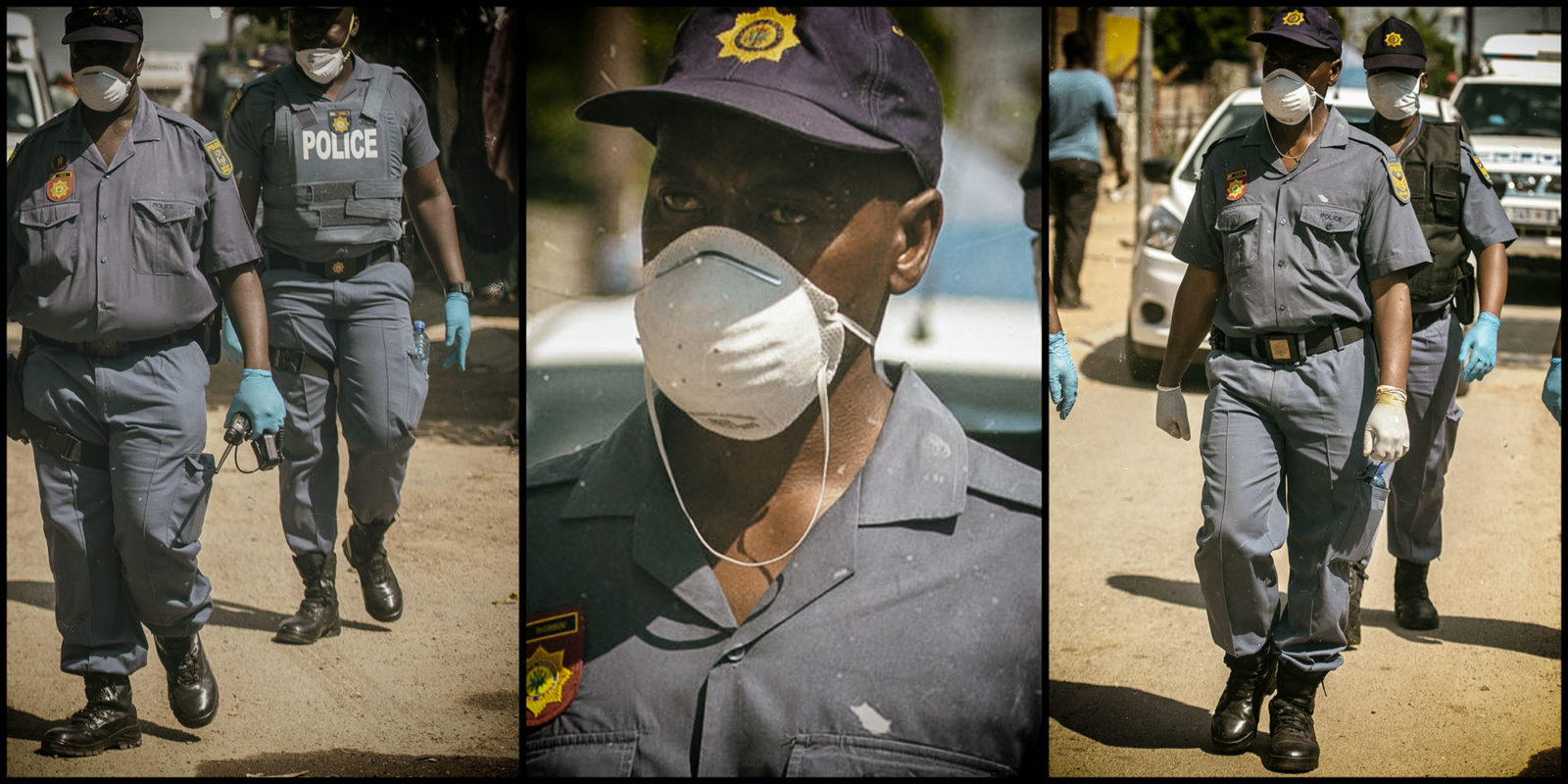 Police wear protective masks and gloves in Diepsloot township in Johannesburg amid concerns over the spread of Covid-19 on 21 March. (Photo: Gallo Images / Alet Pretorius)

The impact of Covid-19 on South Africa is only just beginning to be felt. President Ramaphosa and the government are going to have to take more extreme measures to protect the population and save lives. Possessing moral authority to lead is going to be vital in the coming turbulent days.

For those in the middle classes, this last weekend was perhaps a strange few days at home with family. There would have been many calls to more distant family members, long discussions with people who normally don’t get the time, and perhaps a bit of catching-up on admin.

For others, which is most of South Africa’s population, life would have been more difficult than it already is. No church to provide upliftment, no socialising over a few beers to take the edge off the week. The threat of even greater unemployment as businesses close or go into hibernation without an end date.

It now appears that the government is going to have to use more extreme measures than those already implemented. The Covid-19 is still spreading and the number of cases is rising. Closing schools and higher education facilities have not stopped the spread.

And so all unnecessary activity, all economic activity not related to the food supply chain may have to cease.

We in South Africa are blessed to have a robust food-supply chain. Agri-SA, Tiger Brands and two big food retailers all told SAfm this week how they are able to survive disruptions. Tiger Brands explained how they can actually increase production at this time, or even switch production lines from sauces to “baked beans”.

During normal times, South Africa as a democracy can come close to being “ungovernable”. The entrenchment of the rights outlined in the Constitution means that people are very aware of what they can do, and how they are allowed to do what they want.

This has allowed people to organise themselves into groups that are led by different leaders with different agendas.

At the same time, there is an obvious lack of capacity to enforce extreme measures. The SANDF would not be able to patrol every street and stand on every corner. This is no different from other democracies – even the US, with a much bigger military and much greater resources, wouldn’t be able to do this either.

In our society, there may be a greater problem. During apartheid, the rule of law become delegitimised. For many millions of people, their first brush with the law was an arrest for not having a pass (some estimates say there were around 17 million arrests for pass law offences). For many, growing up meant a relationship with the state that was not consensual; the state abused you, and it is hard to now buckle under and accept tough measures of any kind.

This makes the only asset left to leaders, here and in other places, moral persuasion. In free societies, people have to be convinced to accept extreme measures, even if these are not in their own short-term interests. This is now surely the case here, and in the rest of the world.

Leaders will have to make their case to the public, and then ask them to comply with the measures that are being implemented. While it is possible to punish people who do not comply, it will be impossible to ensure compliance.

There are, however, other ways to sanction those who break the law or disrespect the new regulations.

The first is social pressure. If you are seen to be ignoring the regulations or to be inciting others to do so, then you would face social punishment. This already appears to have ensured that people who may have attacked the government in normal times, or tried to defy it, have remained generally silent during this time.

It is also important that people in government behave properly, that they are not seen to be breaking the regulations, both in their spirit and their letter. This is why the video clip of Social Development Minister Lindiwe Zulu was so significant. She was seen shopping, and then explained that the “virus must just go away”. She has since apologised.

In order to be trusted, the government and leaders, in all organisations and in all positions, must give only the correct facts. Minister Zulu included.

This is where some may well criticise Ekurhuleni mayor Mzwandile Masina. He appeared to leave the prepared script of his speech last week when he claimed that he was sourcing a vaccine from Cuba. The medicine in question does not prevent the contraction of Covid-19, but does help fight the effects of other types of influenza. For him to create false hope in this situation is incredibly dangerous.

If there are more incidents such as this, they could have the impact: firstly of confusing people, secondly of raising hopes that cannot be realised, and thirdly of dividing people.

One can imagine a situation where people believe there is an effective vaccine and that national government is refusing to administer it, or share it. That could give rise to dangerous moments with the situation close to getting out of control.

Normal agendas and in-fighting must be set aside, and the government must be allowed to act with proper moral authority.

Thankfully, we appear to be in a position where this is likely to occur.

Unlike some other places, our president does not play politics with the virus. He does not refer to it, as US President Donald Trump does, as the “Chinese virus”. Also, political leaders here are not using the virus to make money, yet, as at least one senator in the US is now accused of doing.

The next few weeks are going to be a huge test of our government, our society, and you, the individual. It will require immense discipline and fortitude. And good, honest, leadership. DM