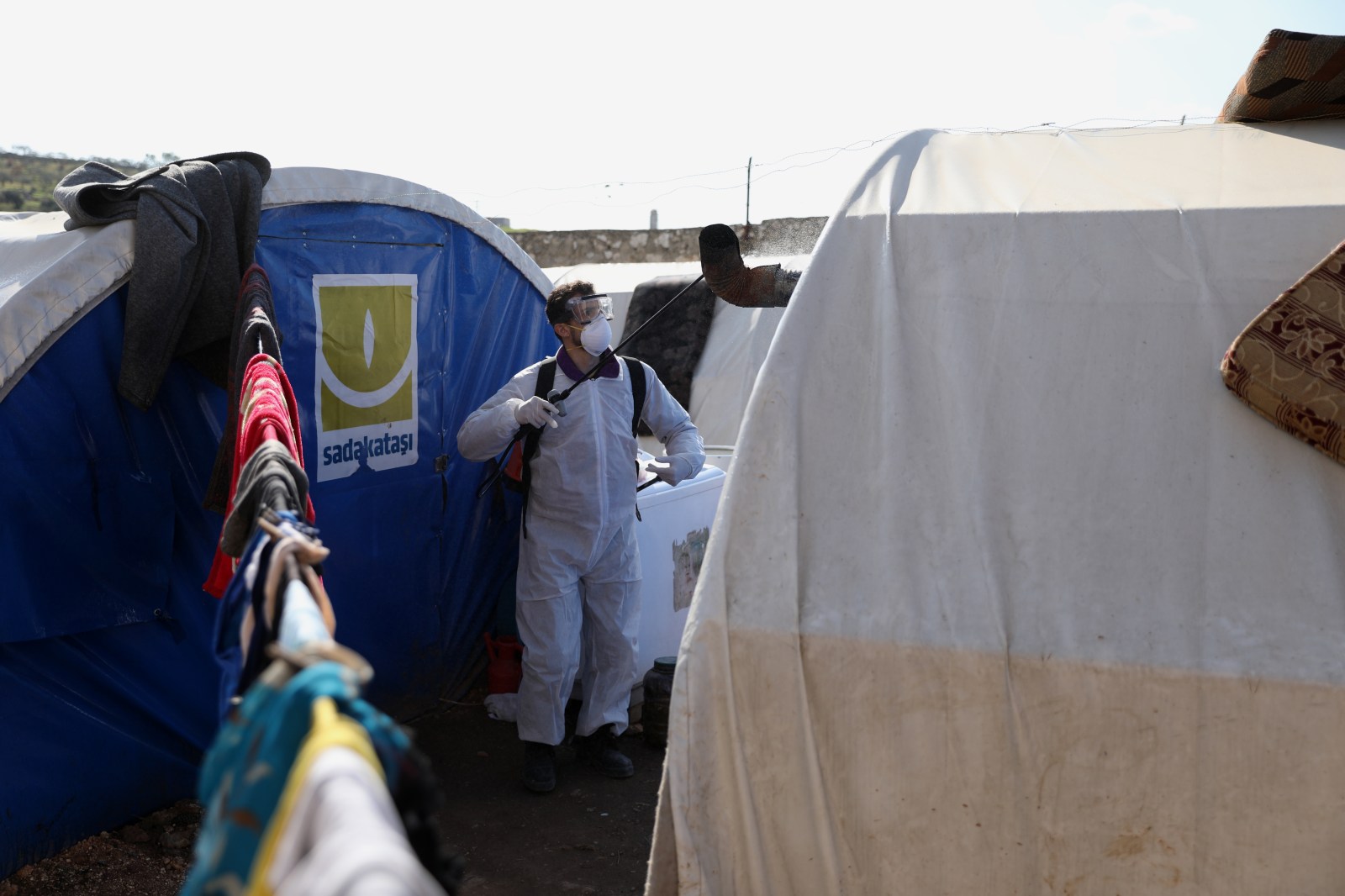 epa08313194 A volunteer from Violet Organization sprays disinfectants as precautionary against coronavirus at tents and public facilities in a camp in the Kafarfalas area, in the northwestern countryside of Idlib, Syria, 21 March 2020 (issued 22 March 2020). EPA-EFE/YAHYA NEMAH

AMMAN, March 22 (Reuters) - War-ravaged Syria on Sunday confirmed its first case of the coronavirus after weeks of rejecting opposition allegations that the disease had already reached a country with a wrecked health system and thousands of Iranian-backed militias and Shi'ite pilgrims.

Health Minister Nizar al-Yaziji told state media “necessary measures” had been taken regarding the 20-year-old woman, who he said would be quarantined for 14 days and given medical checks.

There have been unconfirmed reports in recent weeks of coronavirus cases in Syria, whose health system, housing and infrastructure have been ravaged by nine years of civil war, but the authorities have denied any outbreak or cover-up.

The virus has been spreading in neighbouring countries .

U.N. officials and humanitarian workers fear a major outbreak in Syria could be particularly catastrophic.

Damascus announced a ban on public transport on Sunday as it stepped up a lockdown introduced in recent days, including the closure of schools, parks, restaurants and various public institutions, as well as calling off army conscription.

President Bashar al Assad issued a prisoner amnesty on Sunday, according to state media, which said it was a move to relieve congestion that risked the spread of the virus.

In an unprecedented move, bakeries across the country would no longer open for citizens and bread would be delivered by distributors to homes to prevent mingling by customers during hours waiting in long queues, state media said.

Medics say the country is also vulnerable with thousands of Iranian-backed militias fighting alongside Assad’s forces, who maintain a strong presence in Syria’s big cities and have their headquarters in the Damascus Shi’ite suburb of Sayeda Zainab.

Iran, one of the countries most affected by the pandemic outside China, is Syria’s main regional ally and operates military and civilian flights that bring the militia fighters into the country.

Iran’s Mahan Air still has regular flights from Tehran to Damascus, according to Western diplomats tracking Syria, even though other Syrian flights have been suspended.

The army’s general command announced on Saturday it had raised the level of preparedness in military hospitals and gave orders to minimise gatherings, including military sports activities or any that take place in closed areas.

“We have taken a number of steps … to protect our sons in their residences in military units and formations and order the use of gloves and masks,” an army statement said.

Military defectors say a number of senior officers had taken leave and in some units commanders have given orders to avoid mingling with Iranian-backed militias seen as higher risk of spreading the virus.