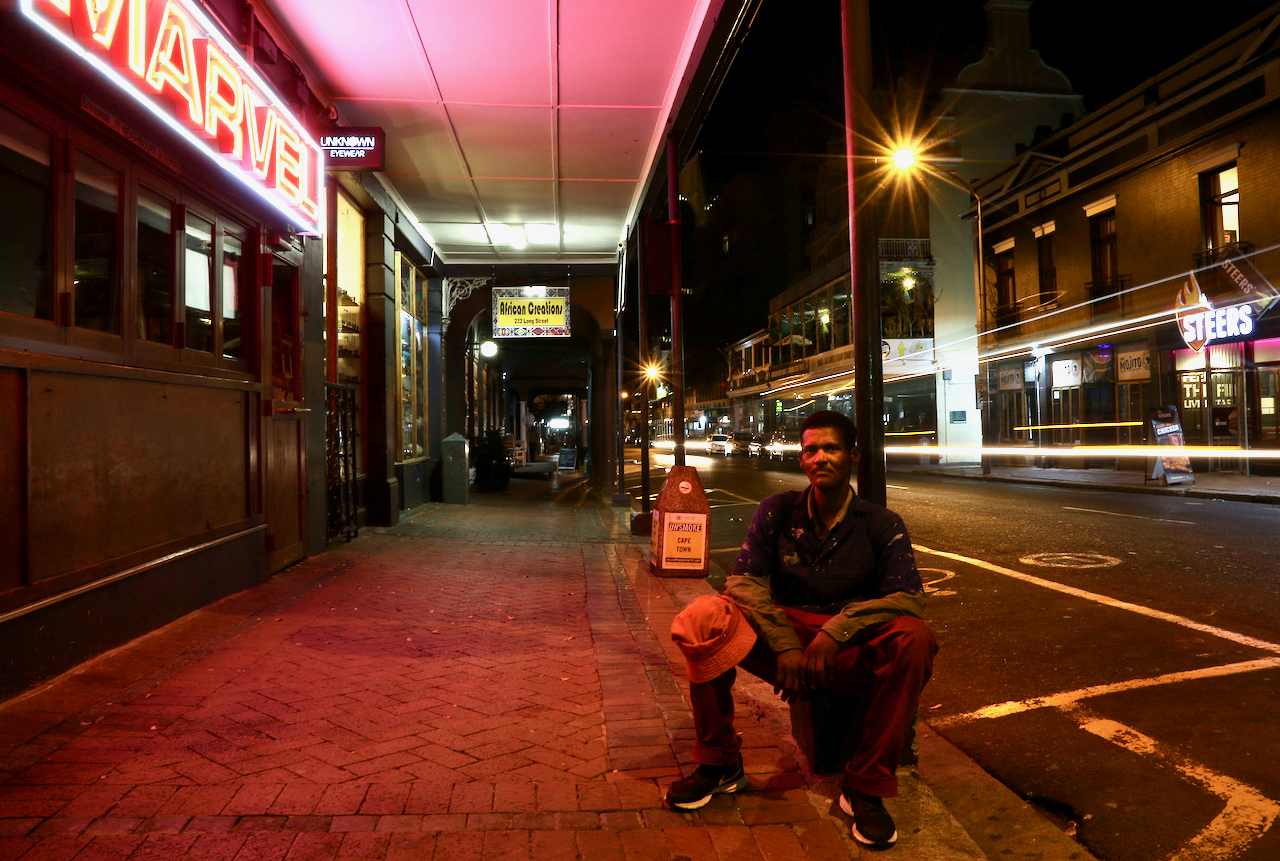 Following the President Cyril Ramaphosa's declaration of a National State of Disaster, Cape Town's nightlife centre, Long Street, was eerily empty on the night of Saturday 21 March. The ban on gatherings of over 100 people, alcohol sales after 6pm, and social distancing has also affected the homeless. Saban Jacobs says he only managed to gather R7 on the day, whereas he would usually get around R150 a day from people out and about on the street. Photo: Steve Kretzmann/WCN

Cape Town’s nightlife centre, Long Street, was eerily empty on the night of Saturday 21 March. The ban on gatherings of over 100 people, alcohol sales after 6pm, and social distancing has also affected homeless people. Saban Jacobs says he only managed to gather R7 on the day, whereas he would usually get around R150 a day from people out and about on the street. Photo: Steve Kretzmann/WCN

Since President Cyril Ramaphosa announced on 15 March a ban on travel and gatherings of over 100 people, the tourism, hospitality, and entertainment sectors have been hard hit.

Possibly thousands of small businesses across the country, as well as artists and freelancers, have seen their income come to a sudden halt and face the prospect of closure or bankruptcy as the country hunkers down under a State of National Disaster to limit the spread of Covid-19.

However, those who contribute to the Unemployment Insurance Fund (UIF) may be able to access funds to buffer the loss of income.

On Wednesday 17 March, Employment and Labour Minister Thulas Nxesi announced that for companies that decide to close for a short period as a precautionary measure “the short term UIF benefit will kick in”.

“If a company contemplates a short term shut down, it is required to inform the Unemployment Insurance Fund. Our team will visit these companies to provide assistance with the processing of the claims,” stated Nxesi.

Regarding concerns that the website might crash under a deluge of UIF applications, as has happened in the USA, Buthelezi said rapid response teams had been set up in each province to go to companies with over 50 employees, who were having to put staff on short time or layoffs.

This would allow for bulk applications from businesses rather than each employee having to apply individually and clog up the system.

He said there had been very few UIF applications for loss of income due to short time or layoff prior to the impact of the Coronavirus, but now he had been “inundated with enquiries from businesses”.

There were no figures on how many applications had been made in regard to short time loss of income, but “we will start seeing those figures as we start processing”.

The provision may offer desperate relief to over 150,000 workers in Cape Town’s tourism sector, which, according to African Eagle Tours Director Enver Mally, has effectively shut down.

Mally said the approximately 50 staff in the Cape Town office were being put on short time, urged to use their leave, and accept salary cuts. He said the directors were also taking a 50% salary cut.

He said he was not sure of the legal requirements regarding UIF and short time.

He said the legislation was so new it “hasn’t even been printed” and UIF offices did not know how to deal with it.

Calls to the listed number on the Department of Labour’s website went unanswered for 11 minutes after selecting the option for UIF submission.

An attempt to register for benefits on the websites resulted in the account being suspended because the vetting process failed.

The lack of information from the Department of Labour supported Bagraim’s assertion that “short term benefits doesn’t work”.

Speaking in the first week after Ramaphosa’s announcement of a National State of Disaster, Bagraim said he had already been approached by about 30 small and medium sized companies in Cape Town seeking advice on putting workers on short time or laying them off for a period.

One of these was a hotel with 150 employees, and two businesses wanted to go into liquidation.

“And I’m one of the smallest law firms in the city,” said Bagraim.

His advice to small and medium-sized businesses needing to close down was to retrench the employees, with an agreement guaranteeing their jobs back once the situation normalises.

This meant workers could access their retrenchment packages and UIF.

Standard UIF payments for unemployment was taking two to three weeks, he said.

The agreement between business owners and employees could include that the retrenchment package would be paid out over a number of months to prevent bankrupting the business.

“I’m not breaking the law, I’m twisting it slightly,” Bagraim said. “I’m working in the spirit of the law if not entirely in line with the letter of the law.”

But agreements to stagger retrenchment packages, along with a guarantee of re-employment, would not suit big business as it was not a true retrenchment and was not strictly according to the letter of the law.

Further measures announced by the Department of Labour were that employees who have to self-quarantine for 14 days will be fully paid provided requirements were met, and if they had to be quarantined for longer than 14 days due to being in contact, or possible contact, with the coronavirus, they can apply for special leave UIF benefits for the period.

Nxesi also said “distressed companies” would have a reprieve from paying UIF. This would provide workers with 1% more of their salary while taking 1% off the company’s wage bill.

However, 1% off the wage bill would not be enough to save small and medium-sized companies, said Bagraim.

Attorney Michael Dixon said employees have to bear in mind that short-time and temporary lay-offs cannot be unilaterally imposed without their agreement.

However, Dixon said employees would “be well advised to consider the proposals, as the loss in income could partly be compensated by the UIF”.

This might prevent the business from having to close and dismiss staff.  DM