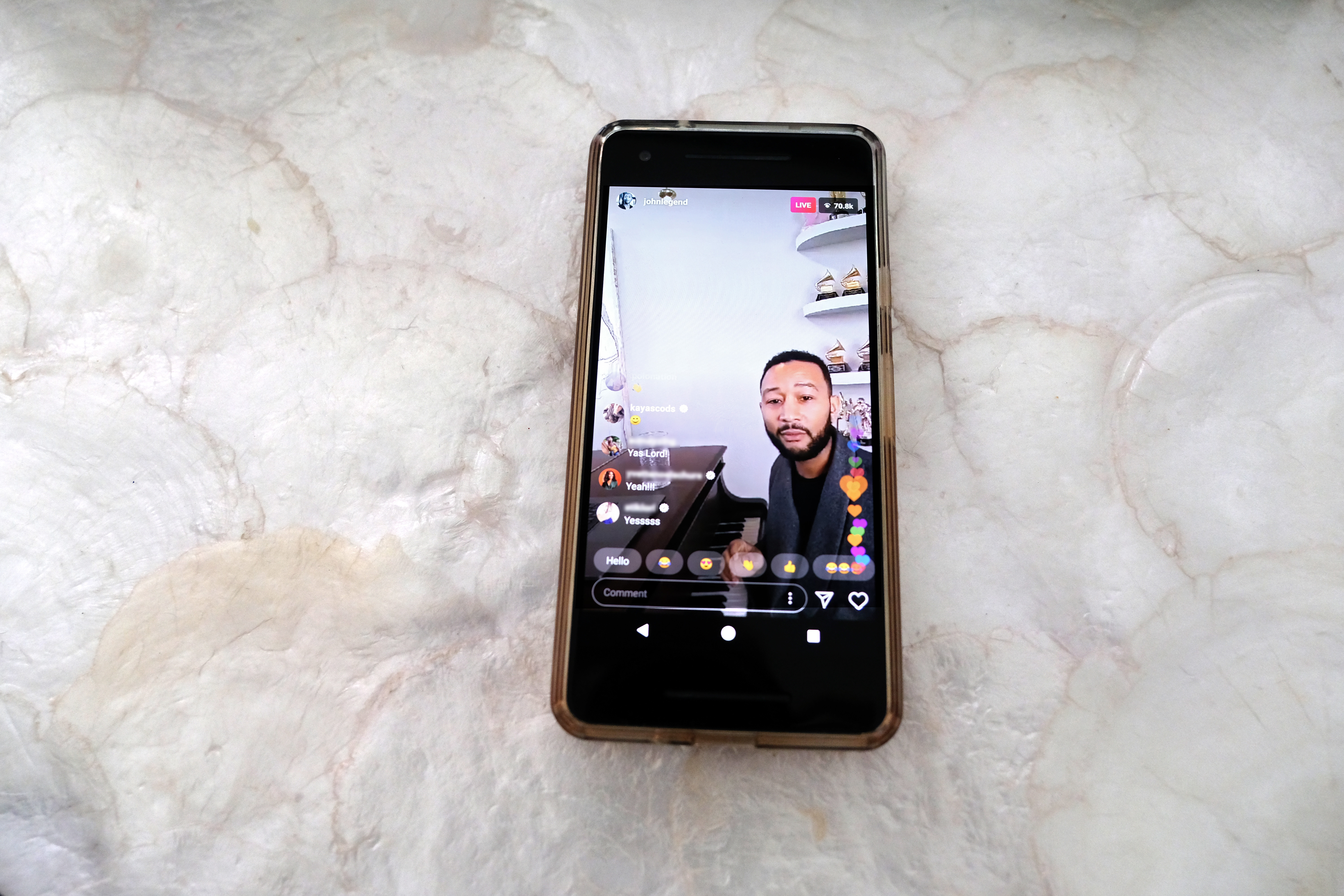 LOS ANGELES, CA - MARCH 16: In this photo illustration, John Legend is seen on a smart phone performing on Instagram Live during the coronavirus outbreak on March 16, 2020 in Los Angeles, California. The tourism and entertainment industries have been hit hard by restrictions in response to the outbreak of COVID-19 and many celebrities are moving to streaming performances instead of live shows. (Photo illustration by Sarah Morris/Getty Images)

We’re not going to lie, the living is tough these days. To help you through the Age of Lockdown, we’ve compiled a playlist to relax, tune in and sing along...

Daily Maverick’s “First Thing” John Stupart wakes up every morning at 4am to compile the daily newsletter to the sound of heavy metal. “It seems counterintuitive, but it’s actually really relaxing. I’m currently listening to The Hu, a Mongolian throat metal band. Yes, that’s a thing.”

Maverick Insider’s Fran Beighton listens to US artist Alicia Keys and pretty much anything by Irish singer and songwriter Dermot Kennedy.

Rebecca Davis chooses Simon & Garfunkel “to escape into a simpler time when people went to the zoo on their days off and weren’t woke enough to know that zoos are cruel animal prisons”.

Thank God it’s Food’s Tony Jackman says “some David Kramer never fails to lift the mood. Carl Orff’s Carmina Burana can only have your spirit soaring. Joan Armatrading’s ‘Willow’ is as comforting as a song can be”.

Maverick Sport’s Craig Ray prefers Radiohead: “Thom Yorke’s melancholy alto voice, Jonny Greenwood’s brilliant arrangements and the band’s songwriting and individual mastery of their instruments is otherworldly. Asking what my favourite Radiohead album is is like asking a parent to name a favourite child. But In Rainbows was released when my best friend was going through a tough battle against cancer and it was a companion to both of us. The world is going through a crisis now and I think it will be the album to see me through this one as well. Sleep Well Beast by The National and Skeleton Tree by Nick Cave will also have some play.”

Scorpio’s Pieter-Louis Myburgh says Felix Laband is perfect in times of stress, while Malibongwe Tyilo’s streaming service “is mostly filled with high-octane hip-hop, which I mostly listen to while working out or driving. But when I want to relax and slow things down a bit, it’s always the Revenge of the Dreamers III album by J Cole and Dreamville.”

Daily Maverick Editor-in-Chief Branko Brkic listens to James Taylor’s “You’ve got a friend”, because, yeah, we’re in this together.

If you’re looking for more options, US actor Rita Wilson, who was quarantined along with her husband Tom Hanks when they were both diagnosed positive with Covid-19, put together, with her followers’ help, a playlist dubbed Quarantunes on Spotify. The set consists of 47 coronavirus-inspired songs like “Locked Up” by Akon, “U Can’t Touch This” by MC Hammer, “All by Myself” by Céline Dion, “It’s the End of the World as We Know It” by R.E.M. and Police’s “Don’t Stand So Close to Me”. The Covid-19 playlist if there was ever one.

As musical events and tours are being cancelled around the world, musicians take to social media to perform in front of their followers. The result? Intimate and moving gigs where musicians, now unplugged and somehow unrehearsed, play music while responding to comments, sharing their raw emotions as the music – and a little less solitude – fills the room; Coldplay’s Chris Martin launched #TogetherAtHome playing solo acoustic guitar and piano and singing “As Time Goes By” and “Life on Mars”. Country music star Keith Urban went “live” from a Nashville warehouse after his show was cancelled; Nicole Kidman pops over, making the whole session even more enjoyable. As France went into lockdown, Parisian singer Christine and the Queens delivered a heart-warming set from Ferber studio. And following on Martin’s lead, a “pants-less” John Legend sits at the piano to sing Stevie Wonder and original songs; Chrissy Teigen, a glass of rosé in hand, joins him and it feels a little bit like sitting in their living room: fun and delightful.

American rapper Cardi B posted a video on her Instagram on 10 March that was all about the coronavirus. Brooklyn-based DJ iMarkkeyz used a line from the video to create a song, which soon went viral, topping iTunes downloads. Now both artists have said they will “donate proceeds from the coronavirus song to those who have been hurt economically by the pandemic”.

John Stuppart recommends the aptly named “Escape”, about science fiction, as well as Dan Carlin’s “Hardcore History”; Marianne Thamm tunes in to NPR’s “Hidden Brain” with host Shankar Vedantam, who, every episode, reveals “the unconscious patterns that drive human behavior, the biases that shape our choices and the triggers that direct the course of our relationships”. It’s both insightful and inspiring. Also on her podcast playlist are Monocle’s “The Globalist” for news and NPR’s “All Songs Considered”.

A sort of thriller sans the murder, Malibongwe Tyilo praises “The Dropout”, “which recaps the story of Theranos founder and fraudster Elizabeth Holmes”.

Business Maverick editor Tim Cohen enjoys “Conversations with Tyler”: “Some of my favorite economists going at each other (in the nicest possible way) about the obvious. Long, for aficionados, but like the idea of Skype coffee (although Skype Scotch and Smoke more my kinda thing)”.

Not a podcast but worth a listen, according to Daily Maverick managing ed Jillian Green, is journalist and rugby commentator Nick Heath’s incongruous and hilarious “live” comments when there’s no longer sport events and life is the new stadium. #LifeCommentary

Need something captivating? Craig Ray listens to Malcolm Gladwell’s “Revisionist History” as he dedicates over 30 minutes per episode, season after season (the show already has four seasons), to reinterpreting “something misunderstood” and giving it its rightful place in history.

To switch off from the news, Karabo Mafolo recommends weekly pop culture podcast “The Read”; WNYC Studio’s “Death, Sex and Money”; “Call Your Girlfriend”, a podcast for “long-distance besties” hosted by journalist Ann Friedman and digital strategist Aminatou Sow, and “Why won’t you date me?” a comedy podcast hosted by Nicole Byer, who ponders why she is still a single woman.

Rebecca Davis says she “absolutely loves the show ‘Reply All’, in which two hosts explore mysteries related to the internet — and online culture more generally”.

Branko Brkic listens to NPR’s Guy Raz as he interviews “innovators, entrepreneurs and idealists” about their businesses in “How I Built This”. His favourite episode? Gary Hirshberg Stonyfield Yogurt, a homemade organic yogurt enterprise that nearly collapsed every year after it launched… And yet never did. It will bring you to tears.

And in times of introspection and sometimes solitude, Anso Thom wishes she had time to listen to “Pema Chodron”, one of the first Western women to be fully ordained as a Tibetan Buddhist nun and a pioneer in the mindfulness movement. ML