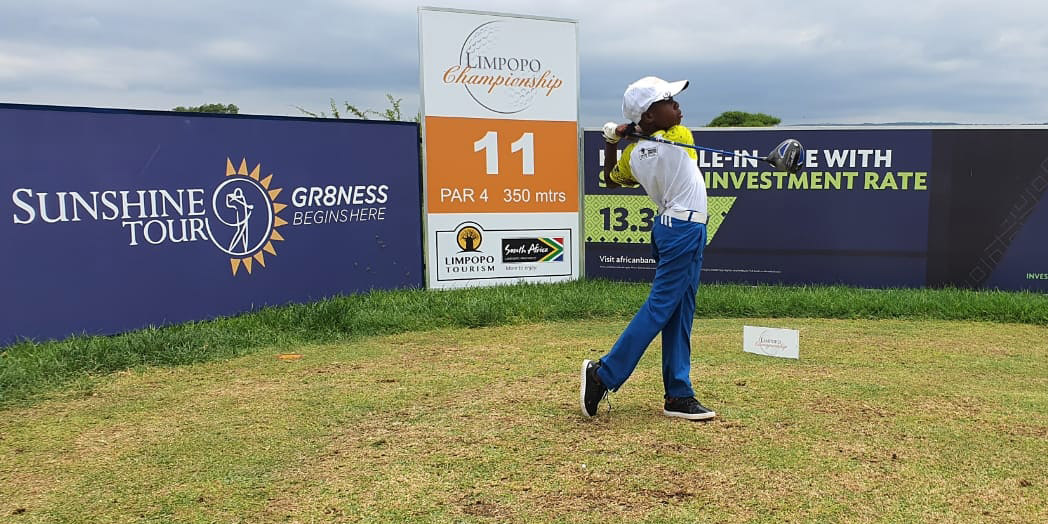 In just under two years of playing competitive golf, eight-year-old Simthandile Tshabalala has made his mark on the sport, representing South Africa internationally and winning a plethora of trophies.

When we meet golf prodigy Simthandile Tshabalala, more popularly known by his nickname, Sim Tiger, he is having a casual round of putting practice at Steyn City’s The Club golf course in the Midrand.

He is the youngest member of Steyn City’s golf club.

On the course, he is joined by his little sister, three-year-old Iminathi. She also swings her putter with much enthusiasm, although she is not as calm and poised as her older brother.

While all this is going on, the siblings’ father, 33-year-old Bonginkosi Tshabalala watches, chipping in with words of encouragement and advice in between putts.

“I grew up with an absent father in the rural areas, so I made it a point that the day I get kids, I’m going to expose them to different sports. The aim was to find a talent at a very young age and then invest,” Tshabalala tells Daily Maverick.

Bonginkosi says he is Sim’s caddy, coach, sponsor and biggest supporter. The entrepreneur adds that he first exposed his son to sports at the age of two.

He took him to a tennis lesson. Then, later on, they added swimming lessons, as well as football and cricket. When Sim Tiger was four, they tried golf.

“I didn’t know much about it (golf) at that time. So, I’d go on YouTube and see how it’s played, then teach him. That’s how we discovered that he was talented in golf.”

Sim’s father shares that he always gets asked the question of how he knows that his son enjoys golf or is even passionate about it. His response is always the same: “How do you have passion for something that you’ve never tried?”

“If you look at your sports stars that are dominating currently, they started at an early age. Look at the Williams sisters, Tiger Woods, Lionel Messi – the list is endless,” he adds.

As he continues to hone his craft, Sim, who is a grade three pupil at Steyn City College, is enjoying the perks that come with being a world-renowned golfer.

He loves golf mostly because he gets to go around the world. He adds that even though he tries to have as much fun on the course as possible, he doesn’t go overboard, lest he lose his concentration.

Despite him settling on golf as his preferred sport, Sim is still an all-round sports kid. When the question arises of which sport he favours most, other than golf, he is undecided.

“It’s tough because it might be swimming or soccer… but I think it’s swimming because I love being in the water,” Sim tells Daily Maverick.

One of the highlights of his fledgling career thus far was participating in the 2020 Presidential Golf Challenge in February 2020. He partnered with Cyril Ramaphosa as they took on some of the president’s Cabinet ministers as well as various executives from the private sector.

“It felt great to play with the president. I was honoured to be there and I can’t believe I actually met President Ramaphosa. It was a great time,” Sim says with a smile on his face.

That was just another accolade to add to his growing list of achievements. At the 2019 South African Sports Awards, he picked up Minister Nathi Mthethwa’s Excellence Award.

Most recently, he was nominated in the Rising Star category of the DStv Mzansi Viewers’ Choice Awards, alongside the likes of disc jockey, Kabza De Small and sportscaster, Thato Moeng.

Sim says when he is not on the golf course, he enjoys spending time with and playing with his cousin, Zoe as well as his school friend, Alex. Together, they play PlayStation games like FIFA and Need for Speed.

Thanks to his favourite YouTube channel, Jelly, Sim has since developed a fascination for the virtual game, Minecraft.

“I play Minecraft as well. I’m a junior. I’m still learning about the game, but I’ll get there,” he states confidently.

The protégé has travelled to a number of countries since becoming a golfer almost two years ago. These include Australia, England, Malaysia, Scotland and Canada. However, when it comes to deciding which of the countries is his favourite, he is emphatic in his response.

“Definitely has to be America. I was happy to be there, trying to win. But the other guys were just too good. I was seven-years-old at that time, so I finished my age. And I was the only South African there in our age group,” the eight-year-old says of his first experience in North Carolina.

Tshabalala says they are fortunate that Sim is in a school that understands his schedule. “We share our schedule with the school and they prepare the work for us to do. They have been very supportive. They are aware of his talent and ability‚ and have worked with us to make it possible for us to travel.”

When he’s on tour, Sim usually does his schoolwork in the evenings. Tshabalala is hopeful that being exposed to high-pressure situations will serve Sim well in future, not just on the golf course, but in life as well.

“Growing up in this environment where he is pressurised, where he knows he needs to perform even when under pressure, will help him be a better sportsperson, or whatever career he is going to choose. Because I can’t decide for him what he is supposed to do,” says Tshabalala.

Sim Tiger, who was given the nickname by the US Kids golf officials after his performance in the World Golf Championship, has big dreams.