The Motjie Who Drives a Taxi: The Story of Aunty Amina Shabodien 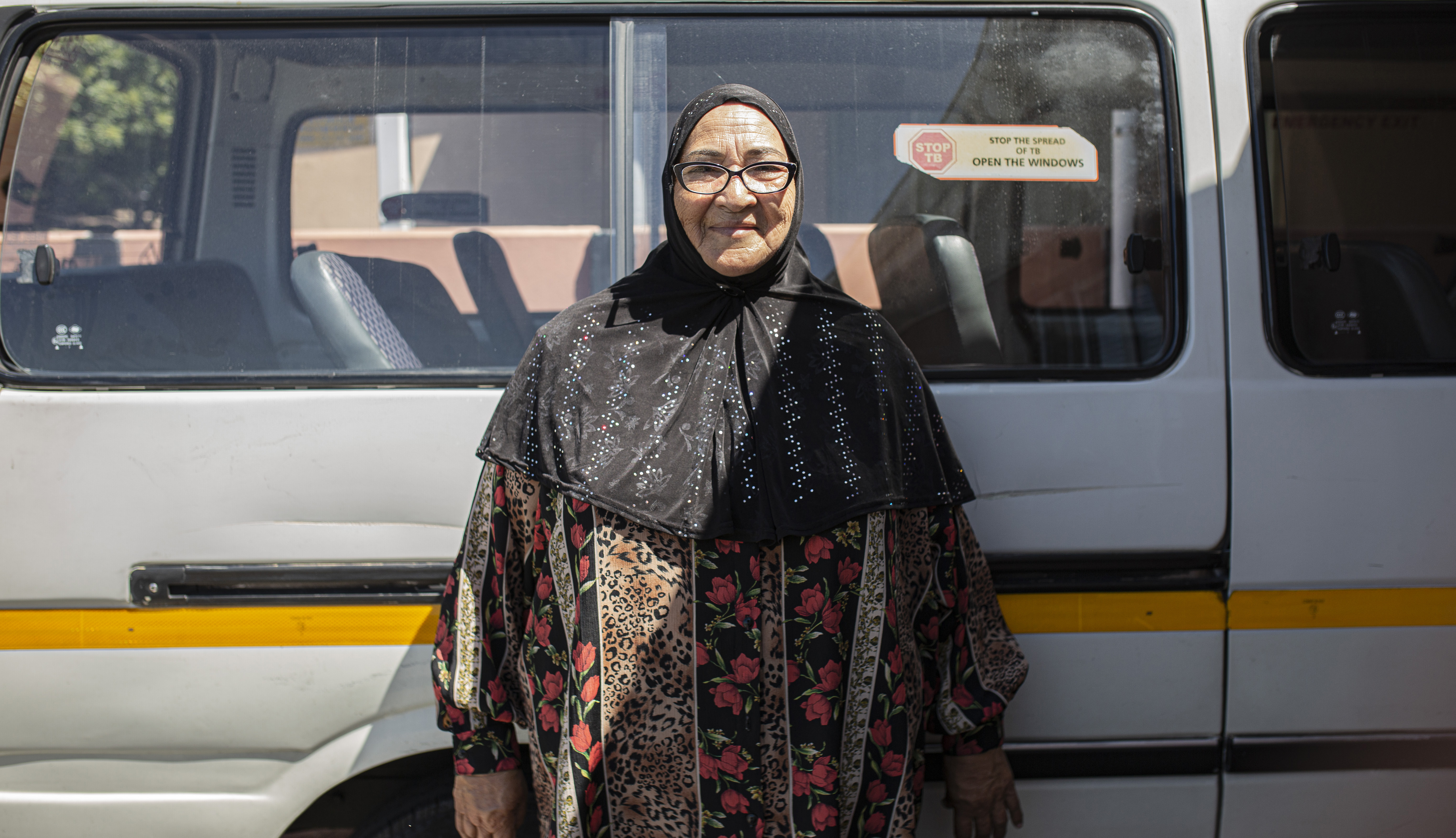 Amina Shabodien, one of Cape Town’s first female taxi drivers, outside her home in Belhar on 25 February 2020. (Photo: Leila Dougan)

Reporting on the Cape Flats often focuses on crime, drugs and gangsterism with little room for stories about older generations whose shoulders we stand on. Here’s one about Amina Shabodien, a trailblazing woman who started her own taxi business in Belhar during apartheid - and who is telling her own story here for the first time.

It was 5am one cloudy day in the winter of 1978 when Amina Shabodien slipped on her white coat and matching gloves. She checked the oil in the sturdy Valiant parked in her driveway before breakfast.

This was her first taxi, and she was the first woman taxi driver on the Cape Flats.

“Those days, we had to wear uniforms and they had to be neat and clean. The white coats looked almost like the ones doctors wear and now — and then the cops would stop us to inspect that we were dressed properly and check if our cars were clean as well,” she says.

“We bought the Valiant from my father-in-law: he was already in the taxi business. Those days we didn’t use kombis, just normal cars. One day he told me there’s no taxis in Parow and Belhar. That time, we lived in a one-bedroom and both my husband and I worked at the factory. I sewed pockets, not pants,” Shabodien says.

Sitting with her husband one day gazing at the Valiant, Shabodien told her husband: “Look at that car.”

That Valiant filled her business mind with potential.

“I said: I am going to apply for a permit for that car.”

At first, Shabodien’s parents were upset that she would be so brazen as to enter a man’s world, but she firmly told them a woman can do anything a man can do, and soldiered on. That’s how Amina Shabodien moved from only sewing pockets but not pants, to picking up commuters from Parow to Belhar – and becoming the taxi motjie (“older woman” in Kaapse slang) who people say is “lekker to drive with”.

At 72, Shabodien looks like any one of my elders: a sweet, trustworthy aunty with great stories to tell. And she is. But on closer inspection, while she is every bit as endearing as she seems, Shabodien vibrates with the powerful assertiveness that only an old-school matriarch can believably embrace.

You don’t want to get on the wrong side of aunty Amina: she will tell you off or “put you in school”, as we say when our elders are about to teach us a lesson.

“Back in the day, I had strict rules in the taxi,” Shabodien says. Though she still drives her taxi, she had to stamp her authority particularly hard in the early days – when the sight of a female taxi driver was unheard of and men would try to take chances.

“I had to put a lot of guys out. They had a problem. You know, the guys talk to the girls because the girls are beautiful and then these men want to put their arms around them. When the girls say no, the guys get violent. But I soema tell them it’s sexual harassment. Hulle is ma bang vir aunty Amina [they are scared of Aunty Amina]. Quickly they move away.”

Other rules included a ban on smoking in the taxi.

“There was a guy smoking once and he burnt someone’s dress, so, from the start, I had a rule of no smoking. Then if they had problems with that or there were fights… if you were under the influence, I put you out.”

We’re sitting at the dining room table in Shabodien’s small Belhar cottage, surrounded by family pictures, Islamic art and the obligatory tray with water and other drinks offerings paired with upside-down glasses. Her walker is neatly parked next to her: Shabodien suffers from a bit of arthritis.

On its frame hangs a bag. It’s filled with what looks like a cardigan, and books. I ask her if she would be willing to reveal some of her treasures to me. The only thing she pulls out is a book.

“Have you read this?”, she asks me, a smile on her face as she brandishes a copy of Yusuf Daniels’ Living Coloured.

“One of my daughters gave it to me, I’m busy with it now. The way I laugh and laugh.”

She thumbs through the copy as she takes me through the ins and outs of her days. They start with the single taxi route she continues to drive early in the morning, and are then filled with more books, movies – and no-carb bread.

Shabodien prides herself on her ability to move with the times.

“I bought banting bread and chocolate and ice cream the other day. With the ice cream, you have to let it melt a bit or it’s a bit funny, you know? But it’s very nice. I enjoyed it. I’ve always liked to try new things.”

The Cape Flats suburb of Belhar, visible from her windows, is famous among the Afrikaans Christian community for the Belhar Confession, a Christian statement of belief written in Afrikaans in 1982 which is centred on the belief that the apartheid policies of the government at the time was contradictory to the gospel of Jesus Christ. It was, of course, those policies that gave rise to Cape Flats areas like Belhar to begin with.

During the forced removals of 1966 Shabodien says they were moved to Bloemhof flats (in Bellville) but that was declared a “whites-only” area so they moved once more.

“Then, my father bought a plot in Elsies River but again, this was declared a whites-only area, so we had to move again.”

She raises both her arms in a gesture of conclusion as if to say: and that is how we ended up here.

You will have read about this suburb in the news recently, in connection with reports about Tazne van Wyk: the child whose body was dumped in a stormwater drain near Worcester by absconded parolee Moyhdian Pangarker after he murdered her. The eight-year-old’s body now lies buried at the Modderdam Cemetery in Belhar.

Amid the dominance of reporting on the Cape Flats focused on crime, drugs and gangsterism, little room is left for coverage of the warm, communal aspects of these societies where women like aunty Amina and many of her generation can be celebrated.

“I’ve been driving for over 40 years and no one has ever done a story on me,” Shabodien says.

Not so long ago she heard a radio interview with “a 35-year-old woman who’s been driving for about 10 to 15 years and they were talking about how she’s never had an accident”.

In her many years of driving a taxi she’s not had an accident either, nor has she ever been robbed. But no one has ever called her to talk to her, or understand how she paved the way for others.

She’s not bitter when she says this, just sad.

“But I just thank god, I say shukr Allah for what I do have, and I move on.”

Almost five decades after she first got behind the wheel, the number of female taxi drivers has risen at a very slow rate – making Shabodien still something of an anomaly.

According to statistics by the Transport Education Training Authority, of the 400,000 to 600,000 people employed in the South African taxi industry, less than two percent are women. Of course, these numbers are estimates since it is well known that many taxi owners do not register their businesses with the necessary institutions, making data collection a touch-and-go process.

But even the total figure is likely to be very low, in a society where women fear violence on the roads and often nominate men to drive the taxis they own for fear of assault and gender-based violence. There are still no women-focused independent alliances or unions that can offer them support.

Joseph Uren, 58, the assistant secretary of the Delft Belhar Parow Taxi Association (DBPTA), the organisation that Shabodien helped found, says she is a bit of a legend in the industry.

“I heard about Mrs Shabodien long ago in the community and then when I started here I got to work with her. She’s a bit of a role model and she’s expiring our young drivers,” he chuckles.

When he started his position, it was an uncommon experience to encounter a woman who drives a taxi — while they have a three who are now part of the association, many women tend to quit after a stint because they’re scared of the harassment or find the routes intimidating.

“This industry is a real challenge for women,” he says.

Shabodien regrets not starting a support group for women at the outset.

Back in the day, she says, “I think at one stage we might have been only two women eventually who drove taxis, so I didn’t think it was necessary to have a women’s-only organisation or something. But we should have started one a long time ago. It’s one of the reasons there aren’t many women drivers now… because we didn’t stand up for ourselves.”

Shabodien believes this is something that would help the industry move into the 21st century, and help women to stand up against sexism and other societal aggressors surrounding the business of minibus transportation.

Shabodien walks me out past her shiny white taxi with yellow trim. On its polished dashboard sits a “Parow” sign. I notice a crate tucked neatly under the driver’s door.

“I use that to climb in and out when I drive,” Shabodien explains with a laugh. “And I use a string to pull the taxi door closed because I don’t have a gaatjie [taxi assistant]. Never have.”

“Sometimes my kids tell me to stop. They care, you know. But you know what I say? Leave me. Let me be a taxi driver.” DM

Haji Mohamed Dawjee is a South African columnist, disruptor of the peace and freelance reporter for several local and international publications. Her book ‘Sorry, Not Sorry: Experiences of a brown woman in a white South Africa’ (published by Penguin Random House in 2018), was longlisted for the Alan Paton Non-Fiction Award.

Sam Sole for amaBhungane • 9 hours ago