Rail, bus and taxi organisations scramble as they mobil...

Rail, bus and taxi organisations scramble as they mobilise to fight Covid-19 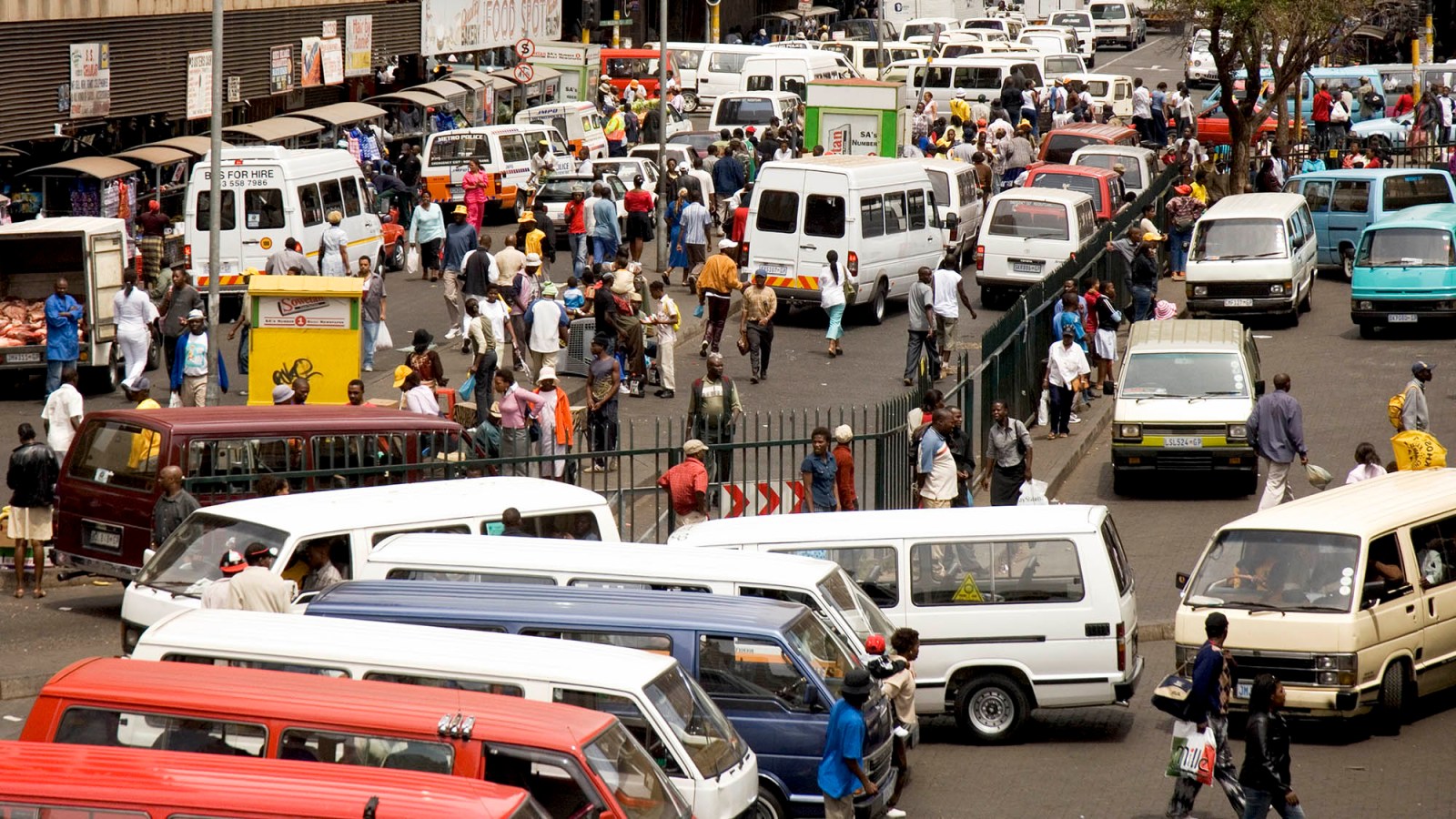 One of the biggest challenges facing South Africa in combating the spread of the Coronavirus is the daily mass movement of millions of commuters on public transport. Transport authorities and taxi associations are scrambling to mitigate the threat.

Taxi commuter Themba Dladla expressed the frustration of many commuters when he asked, “How do we defend against this disease? There are thousands of people in the taxis. There are hundreds of people in clinics. How do we then guard ourselves against such? I say the only solution is for us to seek divine intervention. This is the only way out of this pandemic.”

Dladla, 55, from Dlamini in Soweto, said trying to be vigilant was “just too difficult. I mean, you wash your hands then open and unwrap your loaf of bread. Just because you don’t know who touched that plastic covering the bread you need to go wash your hands again. Tell me, how many people will have the conscience to remember that? A lot more needs to be done to avert an explosion of infections. They should distribute masks, just like they do free condoms.”

It’s a massive problem, and the SA National Taxi Council (Santaco) is working with the departments of health and transport to find ways to mitigate the effects of the pandemic. Santaco spokesperson Thabiso Molelekwa told Daily Maverick that the council was developing an education and awareness campaign for their member associations, and were “sensitising” their structures “not to panic”.

Transport Minister Fikile Mbalula said in a statement that taxis were a critical sector that transported 16 million people daily.

“The Department of Transport will engage the leadership of the taxi and bus industries to mount an aggressive information drive working closely with the Department of Health on preventative measures in the public transport environment.

“Random screening measures will be implemented in the public transport environment, with particular emphasis on commuter rail.”

He said that trains and taxis would be required to go through a process of sanitisation.

In Johannesburg, the Gautrain authorities have been putting out educational materials and messages on their social media on how people are to ensure their hands are sanitised. They have made hand sanitisers available at pay counters and in front of turnstiles for passengers and staff. At stations visited by Daily Maverick, loudspeaker announcements regularly remind passengers to wash their hands, using the soap provided in station toilets. Passengers who opt to no longer use the train during the outbreak are being urged to submit refund requests.

Gautrain spokesperson Kesagee Nayager said employees with a risk of exposure to the virus will self-isolate without any loss of benefit and their employers will cover testing costs.

Hand sanitisers had been made available at all stations; communications from the WHO and Department of Health are being shared with passengers at all stations by way of TV screens and audio announcements; and the Gautrain system, including trains, buses and stations, and touchpoints such as handrails, door handles and station washrooms are regularly cleaned with alcohol-based disinfectants.

“Even though Covid-19 is reportedly not airborne, as an additional safety measure, during maintenance hours air ducts on the trains are being treated with a disinfectant,” said Nayager.

At this stage, Gautrain services are operating according to schedule and any changes will be promptly communicated.

“We also want to use the opportunity to advise that on Sunday afternoon, 15 March, the Bombela Operating Company (BOC) was informed that a business unit director who visited the BOC offices in Midrand between 12 and 14 March has subsequently tested positive for Covid-19. During his visit, he also visited the Gautrain Park and Sandton stations. He travelled to South Africa from France and is currently in self-isolation,” Nayager said.

In Cape Town, the City’s Transport Directorate urged commuters “to practise meticulous personal hygiene while travelling. The City also recommends that commuters consider travelling outside of the peak-hour periods as far as possible to limit contact with other commuters and to avoid crowded vehicles.”

The City said it will implement more regular deep cleansing operations at the public transport interchanges and minibus-taxi facilities, increase the frequency of MyCiTi bus fumigation, limit the number of standing passengers on the bus to half of the standing capacity, and would adjust the frequency of services, as it anticipates a decrease in passenger numbers over the next week given the closure of all schools and universities.

The Gauteng provincial government says it will on Wednesday 18 March outline “a comprehensive action plan which incorporates plans of municipalities of Gauteng to curb the spread of Covid-19”.

Attempts to get a comment from the City of Tshwane on its public transportation plan were unsuccessful.

But it was business as usual at Tshwane CBD taxi ranks on Tuesday. At Tshwane’s main Bosman taxi rank, there was no sign of mitigation measures such as sanitisers or the A4 papers traditionally placed in the windows of taxis to convey important information such as price increases or taxi strike action. Bosman is also home to the Mabopane, Joburg and Pretoria taxi associations that transport people across the borders to Swaziland, Lesotho and Zimbabwe.

Commuter Christina Mweli said that even though she has heard the virus is dangerous, she has no choice but to take a taxi as, “it is cheap and gets me to work fast. What else can I do? It’s what I can afford”.

Taxi driver Lucky Matjila shrugged and said that he watched the president’s address, but he had not heard yet from his employer as to what precautionary steps need to be taken. It was his job to transport commuters and, “What will they eat at home if I don’t work?”

At the Metrorail station opposite the Bosman rank, there were no apparent sanitisation measures in place or hygiene awareness announcements, either on paper or through the station speakers. Cashiers told Daily Maverick they have not been instructed on how to practice precautionary measures against the spread or contraction of the virus. One cashier was wearing her own woollen gloves as protection.

Johannesburg taxi commuter Prince Dlamini, who was waiting to take a taxi to Soweto, said: “We cannot avoid travel. At the end of the month, I have to go home to KwaZulu-Natal. I don’t see the government doing enough. They are warning against washing hands, are they saying this will stop the virus?

“We need something to stop the virus from spreading. How can you test people when they arrive in the country instead of testing them before they board planes to the country. What does testing them once they arrive achieve, because it’s too late by then?”

“We will request a meeting with the authorities to understand their plans and they have to understand our challenges as well,” Mali said.

Some Soweto-Johannesburg drivers were wearing masks and gloves on Tuesday. Taxi driver Sifiso Nxumalo told Daily Maverick that his health came first. “Bazobonwa uhukumeni,” Nxumalo said in reference to his passengers: the government will take care of them.

National Taxi Alliance spokesperson Theo Malele, speaking on Radio 702, said that as one of the biggest people movers, the organisation understood and appreciated its patriotic duty to the people of South Africa.

“We are saying people should avoid contact as much as they possibly can. We have partnered with a company called On Kwela. They have an app that will keep our commuting masses updated daily,” said Malele.

“We also placed an order for about 15 drums of sanitiser. We are targeting 15 taxi ranks. This is where we will begin to help sanitising taxis and also help sanitising commuters and our queue marshals,” said Malele.

The Rea Vaya bus service continues to run between Johannesburg and Soweto, with commuters saying they are concerned for their safety as no preventative measures have been undertaken to protect customers. Rea Vaya did not respond to Daily Maverick questions about the bus service’s preparedness for Covid-19.

The Passenger Rail Agency of South Africa’s Nana Zenani said the issue of how the rail agency is handling the outbreak “is out of Prasa’s hands, it is getting the attention of the ministerial committee.”

Western Cape Prasa spokesperson Riana Scott said the region had completed and submitted to Prasa its preparedness assessment to limit and/or prevent the spread of Covid-19 for employees and commuters.

“The region has commenced with awareness communication among commuters and employees,” Scott said. DM