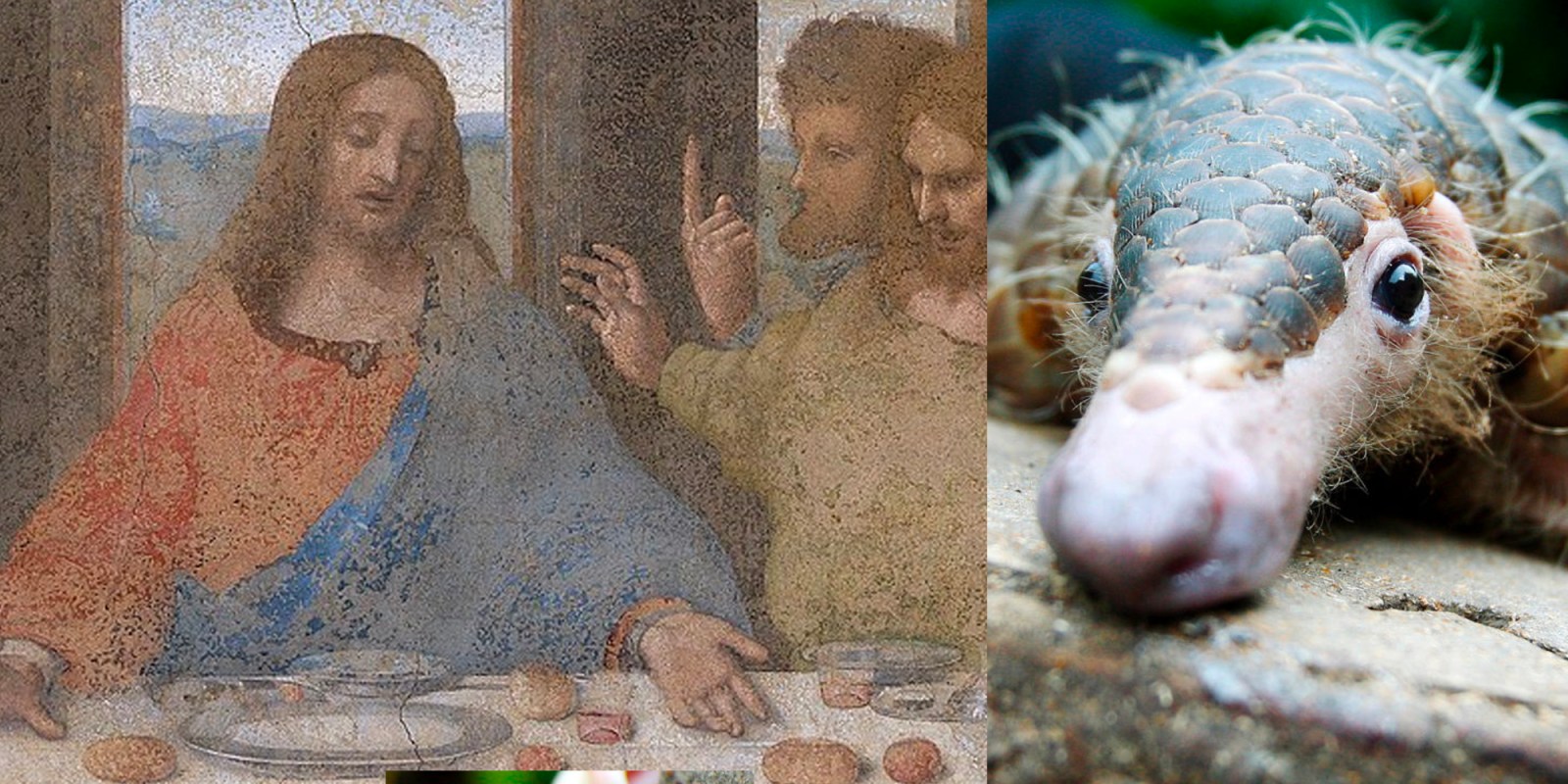 Leonardo da Vinci: The Last Supper (L), A picture made available on 30 June of Hook the pangolin resting on a tree stump while zoo keeper Suman looks on in the Singapore Zoo, 29 June 2008. EPA/HOW HWEE YOUNG (R)

Not since the Last Supper, has any single meal had a greater global significance. Somewhere in the Chinese province of Hubei, a family sat down to have, we think, a scrumptious meal of pangolin. The consequences are now unfolding at a furious rate. You could call it the trillion-dollar meal, except that it has already cost eight times that and will cost more. To the extent that we can know, what are the likely financial consequences of that one solitary meal?

Somewhere in China’s Hubei province, a family sat down to have a meal of pangolin (we think), not knowing that their seemingly mundane, everyday action would devastate the world. Of course, we don’t know whether it was a meal, or a family, or even for certain that it was pangolin. But it’s a frightening thought that such a mundane action could have such severe repercussions. Call it the butterfly effect.

The fact that it happened in China is merely happenstance. Other viruses originated elsewhere. Pangolins are eaten in many places around the world. And of course, the human toll is frightening. Another big open question remains: what will the financial effects be?

It’s important to get the proportions and circumstances right to distinguish between rampant, unwitting fear and the knowable unknowables, however hazy they might be at this point, in the unfolding of such a cataclysmic event as the Covid-19 outbreak.

Let’s start with proportions – what has it cost us, the global citizenry, so far? And how much will it cost us?

The International Monetary Fund estimated global growth in 2020 would come in at 3.3%. That would add about $2.858-trillion to the current estimated 2019 GDP of $86.598-trillion (the numbers aren’t actually in yet).

Post the virus outbreak, the IMF has downgraded global GDP growth to 2.9%, which would imply an extra $2.511-trillion added to global GDP. That 0.4% decline means already $346-billion has been lost.

How big is that? Well, you have to say, not that big. But there are two problems here. First, the IMF tends to overestimate global growth and underestimate the effect of global contagion. In April 2007, the IMF’s flagship World Economic Outlook was reporting that growth in 2007 and 2008 would be, get this, 4.7%. It said “world growth will continue to be strong” and that global economic risks had declined since September 2006.

Actually, it came in at 3%, breaking negative in 2009, heralding a decade-long recession. Well… nobody wants to be a party-pooper.

But it’s not entirely the IMF’s fault. So-called “black swan” events – events that happen so seldom but that also have huge consequences – are extremely difficult to predict with accuracy. They just don’t fit into any economic model. So we can almost guarantee the IMF’s new estimates are too low.

Of course, for us today, this is not the only loss. The second problem is that since February 20, global stock markets have lost, at a very loose estimate, $27-trillion. That is a staggering number.

That surpasses the likely GDP loss by huge margins, but of course, these are mere “paper losses” in the sense that they don’t immediately affect the real economy. You could also argue that global stock markets were anyway puffy – or were a few weeks ago – and they were due for a rerating. Yet, the stock market is an indicator of where investors think the global economy is going, so they can never be ignored.

The third big problem with the Covid-19 downturn has to do with predictability. Small declines tend to expose bigger problems, which themselves create new problems. In an ironic way, they happen in precisely the opposite way pangolins defend themselves. Instead of curling up behind a protective layer of scales, small wounds open the door to a series of other problems that are not knowable and are beyond the primary consequences of the initial issue.

But there is one piece of positive news about the world’s current situation that we should record and that is the false temptation to compare 2020 to 2008. As Neil Shearing, the group chief economist at Capital Economics points out, coordinated policy statements and emergency interest rate cuts have inevitably led to comparisons with October 2008.

The crisis of 2008 was, in essence, a “balance sheet” recession, he writes. House price bubbles inflated and then burst, leaving a hole in households’ balance sheets. That forced a collective shift towards saving, to pay down the debt, rather than spending. And that exposed vulnerabilities in a highly-leveraged banking system.

“As counterparty confidence collapsed, the financial plumbing froze up. All of this manifested itself in a collapse in aggregate demand.”

In contrast, the shock posed by Covid-19 affects both the supply- and the demand-side of the economy. Factory shutdowns, travel bans, supply-chain disruptions and school closures represent a supply shock – the ability of the economy to produce goods and services is diminished.

That means consumer spending drops and large falls in the stock market also feed into weaker demand by reducing household wealth. These effects can be self-reinforcing, since factory shutdowns can reduce the income of workers, which in turn reduces spending.

But importantly, the two situations are fundamentally different, Shearing writes. The 2008 crisis led to a deep recession followed by an extremely slow recovery as households and financial institutions repaired their balance sheets. The Covid-19 shock is likely to trigger large falls in output in the affected economies over the next quarter but, provided that the virus fades, activity should rebound as supply constraints are lifted.

“The outlook is unusually uncertain, but our sense at this stage is that this is most likely to be a short, sharp shock.”

But there is a potentially negative problem here too. In 2008, central banks had the tools to fix the problem: by lowering interest rates they made it easier to save. But now, their role is less clear since interest rate declines don’t always result in improving the supply-side of the economy. It’s not like putting more money in travellers’ pockets will encourage them to travel more.

But in other ways, rate cuts could help. Small businesses particularly will be massively hit by the outbreak.

One of them we have seen already, in the new and quite bizarre oil price battle. The virus-induced oil price decline has now been exacerbated by a battle between members of the oil cartel the Organisation of the Petroleum Exporting Countries (Opec), which has been dying to reduce prices, partly to try and blow US fracking operators out of the industry.

Apparently peeved that Russian President Vladimir Putin would not, initially at least, take his call and when he did, indicated he was against production increases, Saudi Arabia’s Crown Prince Mohammed bin Salman launched an aggressive oil price war.

Because the production increase coincides with decreasing demand, the result is likely to swamp the crude oil market, and that has caused Brent Crude to fall from $45 a barrel to $31.52 in one of the biggest one-day falls in its history. They are up a bit from that now, but not by much.

That came from left field. In a sense, the Covid-19 virus has spawned its own sub-virus. And there are potentially more where that came from.

One of those is China itself. As everybody knows, China has been growing at an unprecedented rate for 30 years, underpinning global growth, pulling hundreds of millions of people out of poverty.

Yet, one of the unknowable unknowables is exactly how resilient China is to a downturn, which would be such an extraordinary eventuality, it’s almost unthinkable. Kenneth Rogoff, a former chief economist of the IMF and professor of economics and public policy at Harvard University, writes for Project Syndicate that because China is a highly leveraged economy, “it cannot afford a sustained pause today any more than fast-growing 1980s Japan could”.

“People, businesses and municipalities need funds to pay back their outsized debts. Sharply adverse demographics, narrowing scope for technological catch-up and a huge glut of housing from recurrent stimulus programmes – not to mention an increasingly centralised decision-making process – already presage significantly slower growth for China in the next decade.”

Yet, the Chinese response to the outbreak has been massive and effective. Recovery rates in China now outnumber new outbreaks. In Hubei province, where over 93% of all cases and deaths have occurred, there were 30,538 cases of infected people last week, with 33,762 having recovered.

This has continued to improve. Total infections as at March 11 were 119,364 cases, 80% of which took place in China, with 65,900 recoveries and a total of 3,558 deaths. Yet, this has taken place on the back of a global spread of the disease. The infection rate is still around 10,000 a week and affected countries now dot the entire globe. One false move here and the impact could explode.

Yet, it’s worth noting that at each successive country that gets hit by the virus, the peak infection rate is involving a smaller number of people. The curve is flattening through faster action and increased vigilance. Still, it all hangs in a delicate balance. 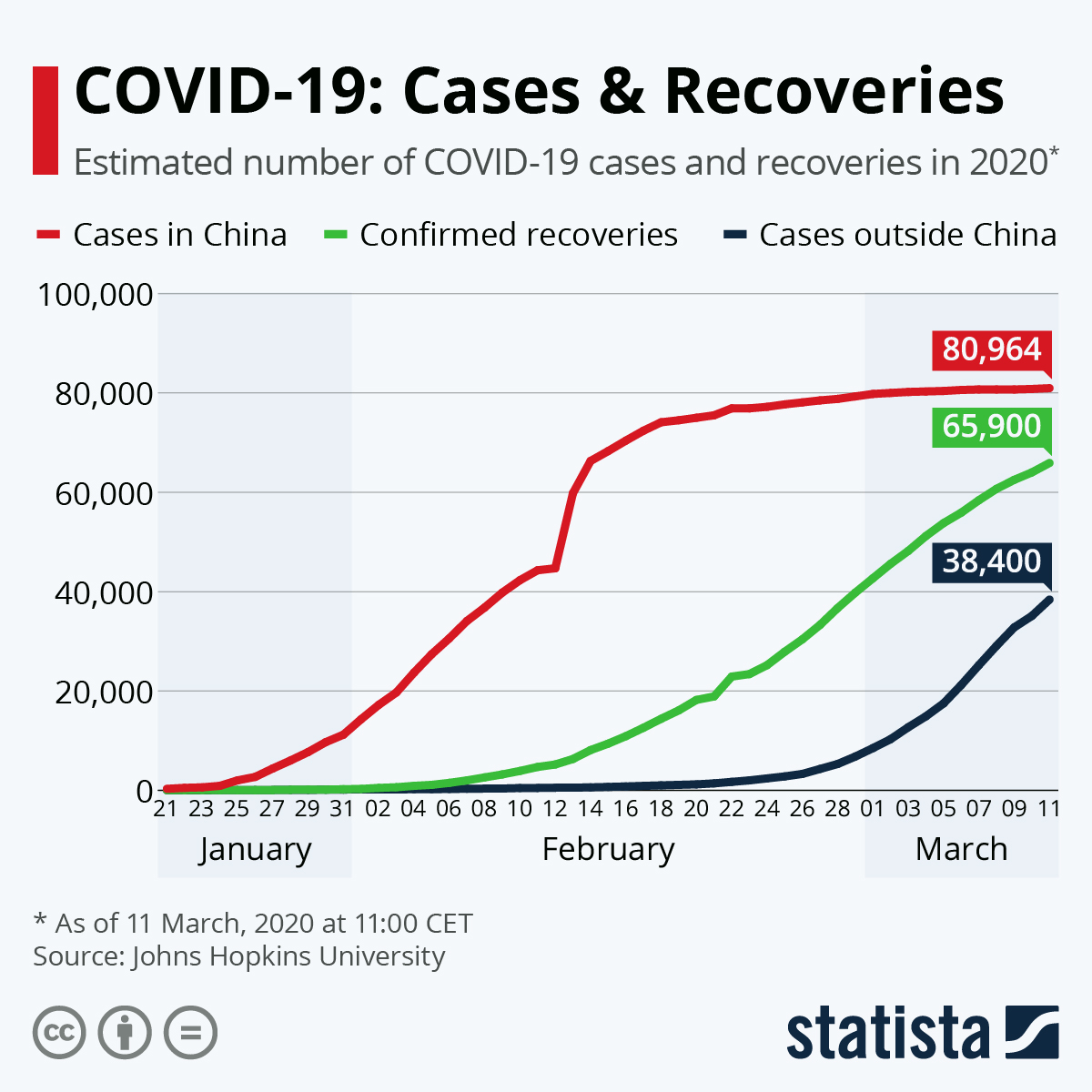 At the Last Supper, Jesus (according to Matthew, at least), took a cup of wine, gave thanks and gave it to the disciples, saying: “Drink ye all of it; for this is my blood of the covenant, which is poured out for many unto remission of sins.”

Quite how big those sins are at the subsequent meal, we are about to find out. DM

With allegorical assistance from Branko Brkic and Anso Thom.

This article was edited to correct the impression that it unduly assigned blame to Chinese people.