Lavender Hill, where for a day, sport triumphed over gangsterism 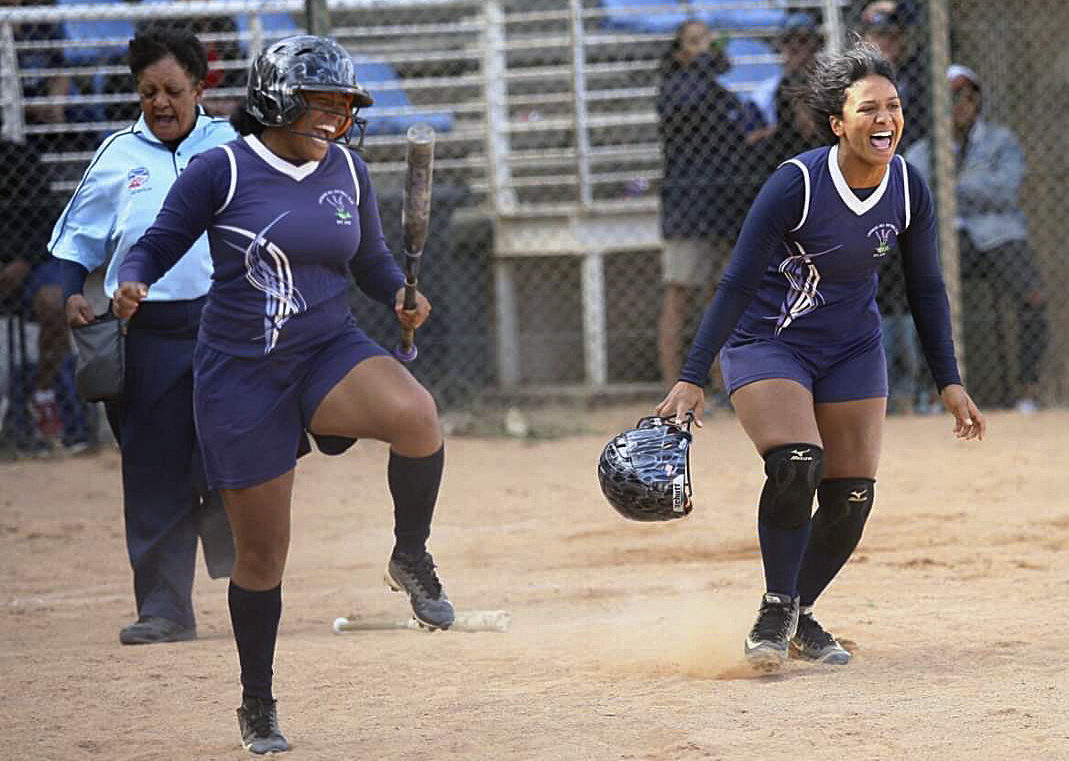 Jubilation in the Lavender Hill Superleague camp after they turned the tables on Sunday and beat Yankees 3-2 (Photo: Rashied Isaacs )

A young women’s softball team is not allowing the daily reality of flying bullets from opposing gangs to stop them from playing their favourite sport. They express the hope that their tenacity and determination will bring back the Lavender Hill their parents knew, but that has now been replaced by gunpowder.

Their Superleague team was seen as the minnow when they entered this competitive sport code seven years ago to compete against the top guns. Seven years of blood, sweat and tears finally paid off when they came up against Westridge Yankees at Turfhall Stadium in Athlone, Cape Town, for the league decider last Saturday. Although they went down 1-5, the Lavender Hill Superleague team were winners in their own right in the eyes of their dedicated coach Marlene Petersen — and in the eyes of the Lavender Hill community.

Two hours before the all-important encounter, three teens affected in some way by gangsterism in the area spoke on condition of anonymity to Maverick Citizen. Chantell, Mavis and Judith, are not their real names.

Chantell, 19, explains that they have no warning when the shootings between rival gangs occur. Sometimes the shooting starts when they must go to practice, but the players must stay indoors and walk later to the transport collecting them.

“It is very scary for us. I have a brother who was involved in gangsterism and in jail. The gang that he belonged to knows me. The real danger is when one of those gang members joins a rival gang. I’m scared to walk to training because my life is in danger. Every day when I walk in the area I ask the Lord for protection.

“Softball is a safe environment that keeps us out of gangsterism. If you train or play a match instead of being at home, you feel completely safe on the softball field and don’t need to worry about the shootings. At home and even in your own house you do not feel safe,” Chantell said.

Another player, 17-year-old Mavis, says softball gave her a better life and believes it can have the same effect on scores of young children if they are ready to make the change.

“Softball taught me how to communicate with people, interact with people, kept me out of gangsterism and mixing with the wrong crowd. It keeps me alive and helps me to discover my true potential,” she said.

The third player, 18-year-old Judith, said she has two family members who belonged to a gang. She hasn’t been able to speak to them about why they joined a gang because they cannot enter the section where she lives.

“The gangsters know who I am and I’m scared that if they can’t get my cousins they can take me out,” she explained.

Coach Petersen, 47, has been involved in softball for more than 20 years. Prior to taking over the reins at Lavender Hill, she had stints with Woodside and Maitland Giants. Petersen is employed by the provincial Department of Cultural Affairs and Sport. She says the Lavender Hill community is one of several that benefited from the department’s Mass Participation and Opportunity Development Centres (MOD) aimed at improving school pass rates and bringing down crime levels in neighbourhoods.

“I’m aware that a family member of one of my team players belonged to a gang, another one was shot and killed. I must commend the players and applaud them that despite the odds being stacked against them, they persevered and played the sport they were ecstatic about and enjoy.”

In Lavender Hill, the MODs were introduced at Lavana Primary, Lavender Hill High School and Prince George Primary. This resulted in the formation of two senior and two junior softball teams.

One of the obstacles Petersen faces is the lack of financial support. It costs between R40,000 and R50,000 a year to pay for a bus to pick up about 35 players every weekend and take them home after the games.

Up to now, this was being paid out of the pockets of the senior and working players. They do it for the love of the game and in doing so make sure that these young women don’t fall prey to gangsterism and drugs.

The shortage of finances also hampered efforts on Saturday to arrange a bus that would have transported proud parents and residents to the game.

On a more positive note, she said 19-year-old Grivonne Rhode had been twice selected to the under-19 national team and had travelled abroad thanks to the opportunities provided by softball.

On Sunday, the Lavender Hill senior team redeemed themselves when they edged out Yankees 3-2 in a pulsating knock-out final.

It is Petersen’s aspiration that the Lavender Hill softball teams become a beacon of hope in the area and something that would inspire, especially the young people. MC