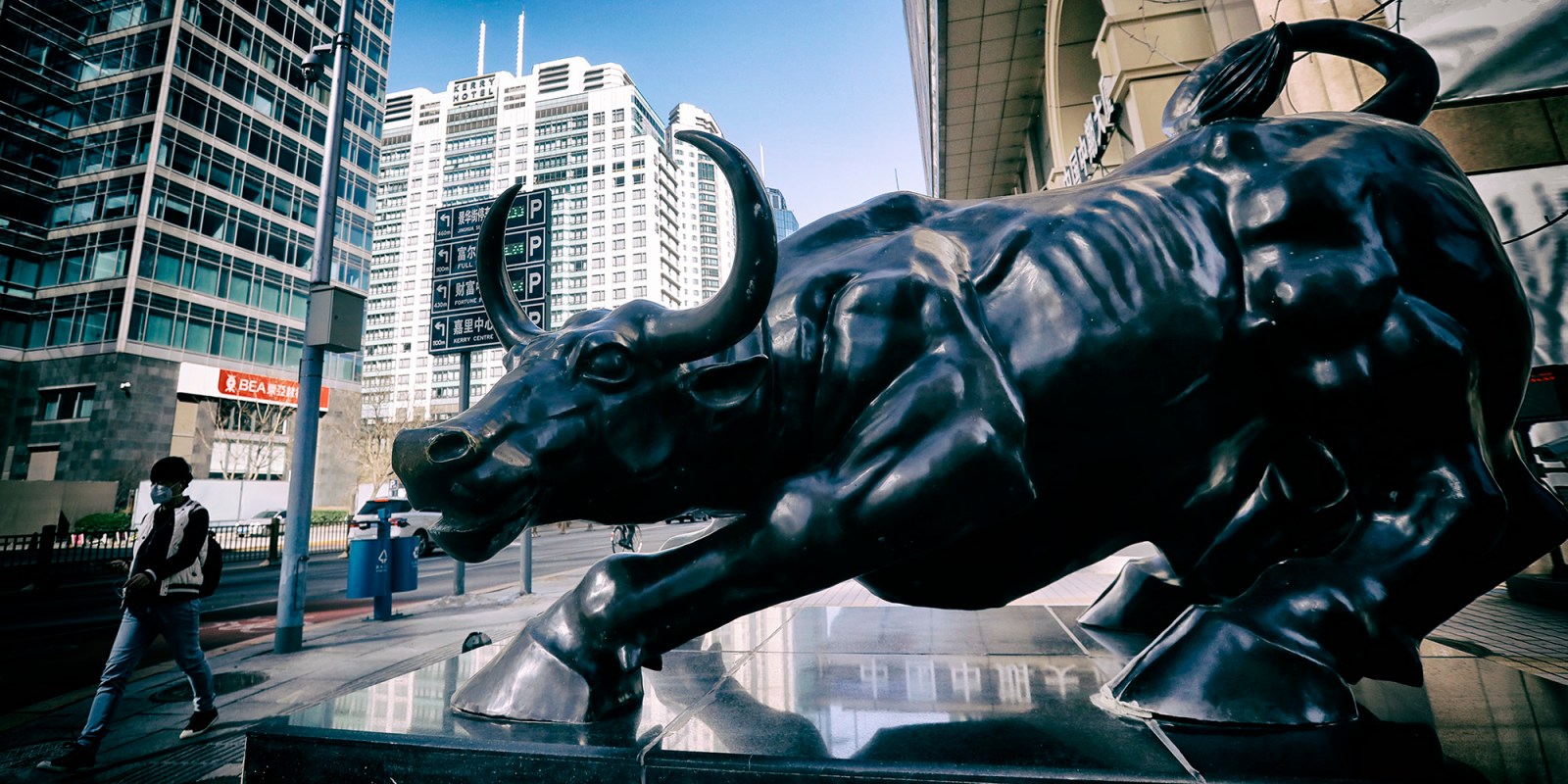 China has given us a taste of things to come after releasing economic statistics that show how much pain has been inflicted on its economy in its efforts to lock down the coronavirus.

As the US Federal Reserve pulled the trigger on what little ammunition it had left, China released economic statistics that show what a sudden stop in economic activity looks like two months after the country went into effective shutdown to contain the spread of the new coronavirus.

The statistics show Chinese industrial production slid 13.5% year-on-year during the first two months of the year, fixed asset investments slumped an even more startling 24.5% and retail sales came off some 20.5%. These figures give scary insight into the pain other economies, particularly other emerging markets could face in the months ahead.

As the first figures to capture the fundamental impact of the virus, they exceeded even the most pessimistic estimates. So much so that ING Greater China Chief Economist Iris Pang commented:

“There is nothing in the history of this data that can compare to this set of abysmal figures.”

She does see some light at the end of the tunnel for China, saying:

“Investment might recover faster than retail sales and industrial production because the government has promoted ‘new infrastructure’ investment to boost economic growth to support the recovery. So, fixed asset investment in the coming months should rise from negative growth.”

However, she notes that industrial production will remain under pressure during March and April “as the spread of Covid-19 in almost all countries means global demand will stop abruptly, and the global supply chains will still be broken when factories around the world suspend operations”.

“However, the international demand shock of fear of the virus will be a drag on Chinese growth,” he adds.

While China may already be painstakingly climbing out of this economic black hole after the considerable fiscal and monetary policy stimulus measures it has undertaken this year to date, other emerging economies may find it much harder to win back economic ground they lose this year.

With most emerging markets still heading for a coronavirus growth shock at a time when they have already been struggling with low growth, the two things they will need to find their footing again are in short supply: foreign investment flows and fiscal and monetary policy capacity to stimulate the economy.

Two research reports published by the International Institute of Finance (IIF) in the last few weeks highlight the challenges emerging markets are facing on these two fronts. Firstly, the institute’s tracker of non-resident portfolio flows to emerging markets recorded its most negative reading ever, with the outflows that have already been experienced far greater than the disinvestments experienced during the 2008 global financial crisis.

The IIF is particularly concerned about those emerging economies that have seen their foreign investment holdings as a percentage of GDP increase as a result of the flow of money looking for a home in high-beta assets after a decade of “extraordinary monetary policy stimulus” rather than valuation gains in those assets. It points to South Africa as “a stand-out” in this respect alongside Mexico and Chile. As you’ll see in the graph below, South Africa’s foreign portfolio holdings as a percentage of GDP are 100% a result of flows and not valuation gains. 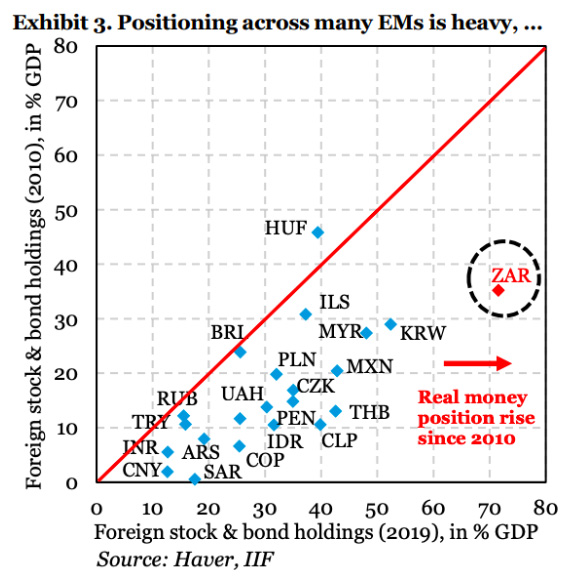 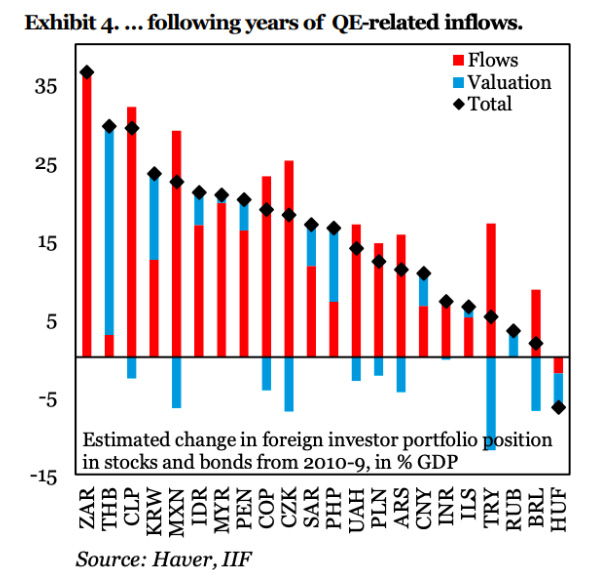 The problem with attracting foreign portfolio investment for the wrong reason is that it is hot money that will flow out as quickly as it has flown in, particularly if the fundamental economic rationale for investing in the market is not compelling.

The IIF says, “We have documented negative growth momentum in many emerging markets even before the Covid-19 shock, including in Mexico and South Africa, so that the initial conditions in many places are weak and vulnerable to a persistent pull-back in foreign financing material.”

The impact of foreign portfolio disinvestment is evident in the significant decline in emerging market stock market indices since panic took hold of global financial markets in late February. By the end of last week, the JSE All Share Index had come off 23.7% since February 19 and is off a similar amount for the year to date. Other emerging markets that have experienced similar sell-offs include Turkey, which has slumped 19.8% since the February high, Mexico, which is off 18.4% over the same period and Brazil, which has been particularly hard hit, losing 29% since then.

China is an exception, having been rewarded for its proactive measures to contain the virus. Its Shanghai Shenzhen CSI 300 Index has lost a mere 3.8% since February 19 and is down just short of 5% since the beginning of the year.

With investment flows unlikely to return meaningfully to emerging markets until the global economic outlook becomes more favourable and investor sentiment returns, emerging markets will have to rely on their own internal measures to help their economies survive. However, the other Achilles heel that emerging markets have that China did not is they don’t have a blank chequebook to finance the expansive fiscal and monetary stimulus measures that are likely to allow China to put those dismal January and February figures behind them.

Some emerging markets do have the capacity, though, according to the IIF, and should use it “sooner rather than later”, before the economic environment gets worse. It notes that the US Federal Reserve’s recent rate cuts have also “widened monetary policy space for emerging markets” and, because virus-related effects are likely to affect growth negatively rather than cause inflation, the IIF believes this alleviates the pressure on central banks to adopt hawkish monetary policy stances. 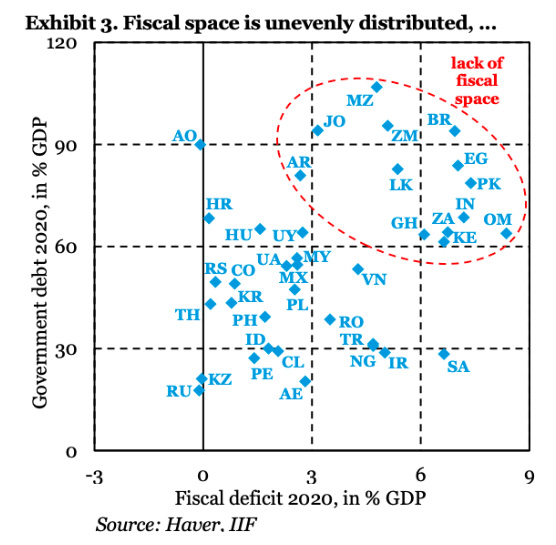 However, for South Africa, which the IIF identifies as one of the few emerging market economies that do have monetary policy space, it warns that “substantial fiscal risk leaves the SARB with less room than real rates indicate.” However, the policymakers will have to use that room wisely as the government takes the decisive, far-reaching and, few would argue, necessary action to contain the virus after seeing countries like Italy and South Korea regret not having moved sooner. BM