Activists Talking: Protest in a time of Climate Crisis 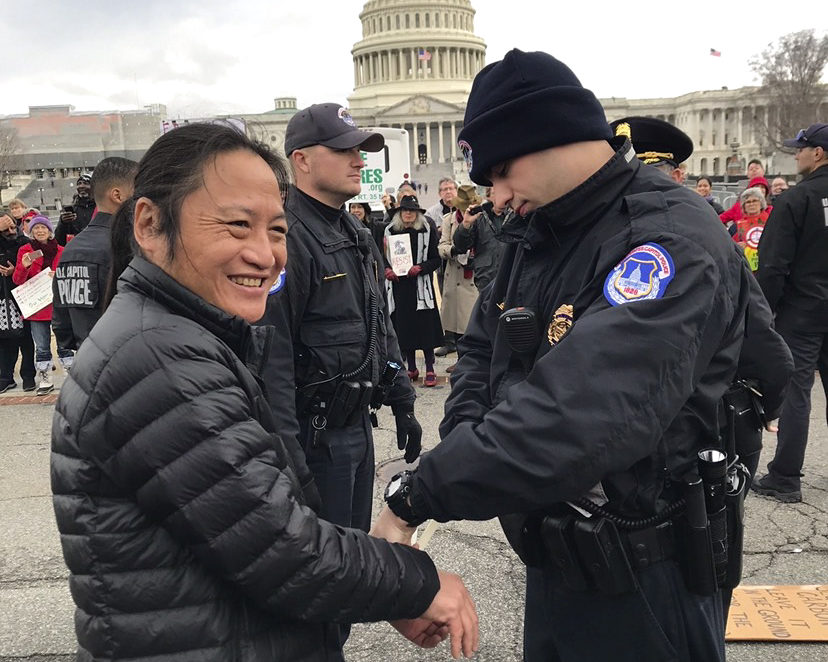 EarthRights International co-director Ka Hsaw Wa is arrested outside the US Congress during a Firedrill Fridays Protest in January 2020. (Photo: Supplied)

Saturday 21 March is Human Rights day in South Africa. Although public gatherings planned to mark the day have been cancelled because of Covid-19, this does not stop us from thinking about the issues and the importance of human rights. Over the coming days, Maverick Citizen hopes to provide you with food for thought and discussion. We also welcome your own reflections on human rights in the era of inequality.

Ka Hsaw Wa is an activist who will forever carry with him the scarring memories of his fight against the military dictatorship in Burma. In the 1980s, as a student, he was imprisoned and tortured.

“A friend who opposed authority had disappeared and the police wanted information about him. So they detained and tortured me. They beat me for three days until I passed out. Once I was released and had recovered in hospital, I joined the student movement.”

The experience turned him into a freedom fighter. He fled to the jungle in 1988, and in the years that followed he worked with village communities, monitoring and trying to report the abuses of the military. He documented pillage, murder and rape. Eventually, in 1995 he fled Burma and, 20 years ago, co-founded Earthrights International with Katie Redford, a volunteer and activist from the USA who had taught him about love and law in the jungles of Burma.

That was 25 years ago. Since then the world has changed. Democracy came to Myanmar, and then left again. The struggle goes on, as they say. Issues morph, merge, emerge and evolve.

Thus it was that on 3 January 2020 Ka Hsaw Wa was on a very different frontline when he was arrested in a symbolic statement to show solidarity with another era-defining struggle. He was one of 50 people, including his 22-year-old daughter Nyo Kwee Tha (a Karen name that means “sacrifice”), arrested in Washington DC outside the United States Congress as part of Fire Drill Fridays, a weekly protest to demand political action to address the climate crisis. It was catalysed by actress Jane Fonda and has been going on since September 2019. So far over 700 people have been arrested in a campaign of civil disobedience targeting fossil fuel industries and the US government.

When I interviewed Ka Hsaw Wa about his reason for joining the protest, his responses combined deadly seriousness with playfulness and jocularity.

He started out by saying that “to be arrested in the USA feels like a five-star hotel”. At another point, he called the gathering “a social event… it looked like a party to me”.

But, I sense, seeing light in serious actions is part of his nature, perhaps a defence mechanism picked up long ago in the jungles of Burma. Because, in almost the same breath, he describes his arrest as “maybe not a life-changing event, but it made me think”.

Ka Hsaw Wa says he had two reasons for being part of the protest.

“Firstly, I want my struggle to continue into the next generation. I have learnt that little people make a big spark.”

Second, and I sense this is his most important reason, “I want to show my people back home that it’s important.”

“Back home” (and in many other developing countries where people live in permanent poverty, unemployment, homelessness and illness) “people are fighting for tomorrow, they don’t have the privilege of thinking about what will happen in 10 years.” (Ten years is the time the UN Intergovernmental Panel on Climate Change estimates we have to massively reduce carbon emissions globally if we are to keep to the 1.5° warming target set by the Paris Agreement.)

“People in Myanmar don’t understand this struggle. When people face life-and-death problems now they can’t think about a 10-year problem. So by my involvement, I want to show that the climate crisis is not a Western problem, it’s a global problem. This is not a white people’s revolution. It must be a worldwide revolution. All of us have got to be on the same page.”

In this context, Ka Hsaw Wa refers to struggles in Myanmar and across SouthEast Asia against deforestation, extractive industries that rob indigenous people of productive land, the choking pollution that comes with coal. The struggles are examples of how “we are all working on climate change, yet my people don’t yet see themselves as part of the climate justice movement”.

Fortunately, on the day of the protest, a journalist from Radio Free Asia was there. “She took pictures and posted them on FaceBook, which generated a big discussion amongst activists back home. Now more students in countries like Myanmar and Thailand are active in groups like Fridays for Future (the global student movement inspired by Greta Thunberg).”

I turn his memory and thoughts to the arrest itself and how he felt. Interestingly, despite his earlier comment that it was “like a five-star hotel”, it’s evident that a lot of feeling, emotion and learning got compressed into those few hours.

Quite a lot of it was about race.

He says during the arrest, while he was doing all he could to cooperate, the white cop subtly “hit me three times in the balls and was quietly yelling at me”.

It’s a vivid description and I can well imagine it. Brown people get treated differently by the law, hence movements like  Black Lives Matter.

But that was almost to be expected.

However, the arrest led Ka Hsaw Wa to another epiphany about race: “To begin with it looked like a party to me. But then I met very dedicated people, people who really cared. There was an 80-year-old nun, Sister Ardeth Platte who had been to jail many times, and I thought “oh my God the white people also have a heart”. Although at the outset I felt “this arrest is nothing” I came to realise others’ integrity.”

On the day I speak to him, Ka Hsaw Wa is at home in Washington. Since September, people have continued to be arrested every Friday and more and more evidence of the disastrous impact of global heating is emerging. We are getting closer and closer to the tipping points.

At the same time, “new” issues – not disconnected from the way we have brutalised the planet and its poor – have emerged, the most frightening being the Covid-19 pandemic. Once again, the United States government and its President Donald Trump are a centre of attention. But the learnings of the arrest still resonate:

“My personal perspectives that often generalise and stereotype white people changed that day. It’s obvious, but important to state, especially for people in other parts of the world, that America is not only the Trump kind of people, but also the Jane type of people.”

“I realise that ‘my people’ is not just the people of Burma, but all the people with no voice in the world.” MC

Ka Hsaw Wa is the Executive Director of EarthRights International, which celebrates its 25th anniversary in 2020. Mark Heywood is a social justice activist from South Africa and editor of Maverick Citizen.