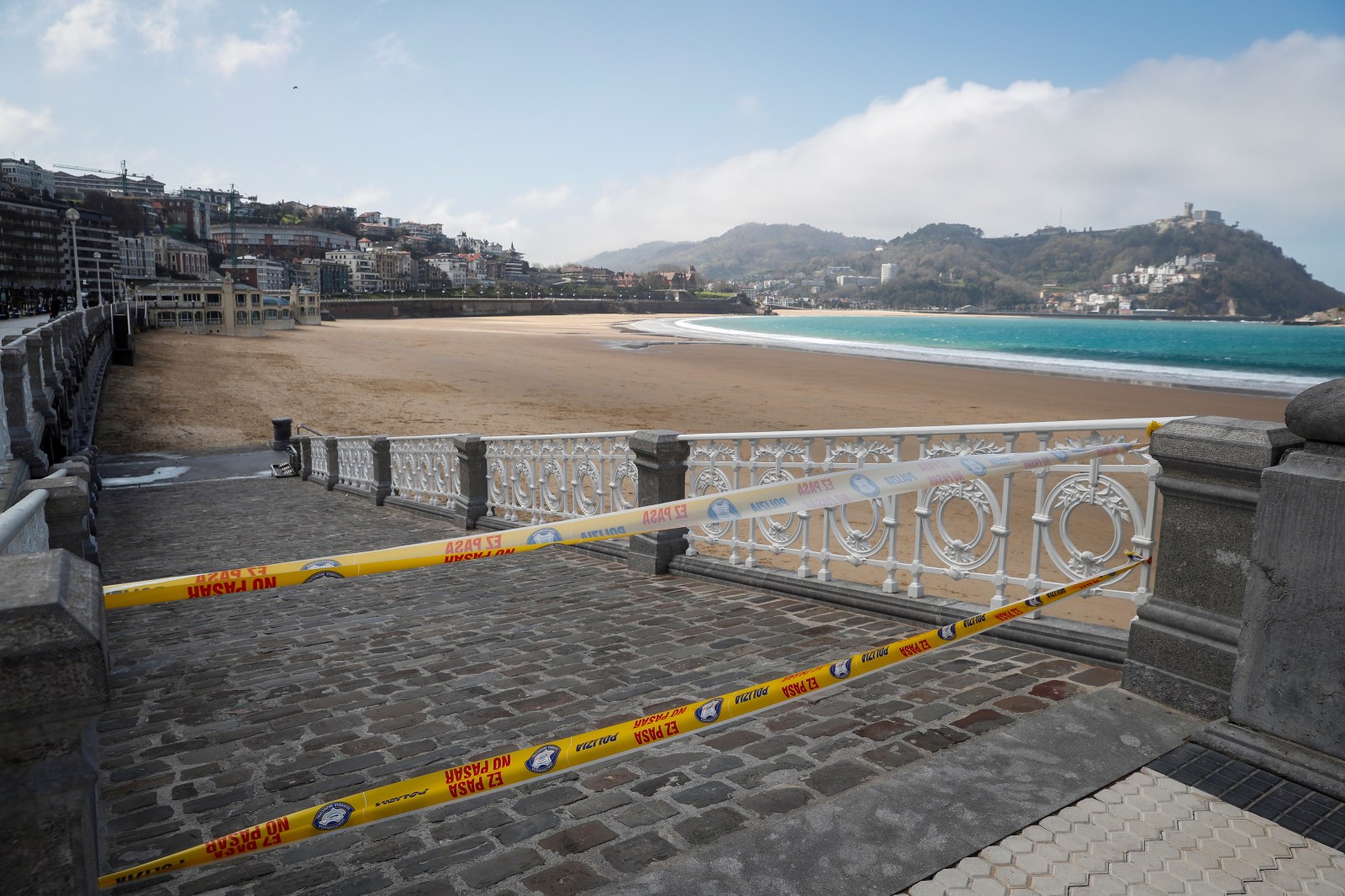 epa08296011 General view of the closed to the public Concha beach in San Sebastian, Basque Country, northern Spain, 15 March 2020. The Spanish Government declared the alarm status in the whole country establishing restrictions to citizens' movements in public spaces. People will be only allowed to leave their homes to go to work, return home, go to supermarkets to buy basic commodities, pharmacies or attend doctor appointment or emergencies. EPA-EFE/Javier Etxezarreta

MADRID, March 15 (Reuters) - Spaniards hunkered down at home on Sunday after the government imposed severe restrictions on public life to try to stop the spread of coronavirus, as cases of infection surged at a similar rate as in Italy.

Spain, the second-worst affected European country after Italy, on Saturday ordered its 47 million citizens to stay indoors except for necessary outings such as buying food and medicine.

Streets in Madrid and Barcelona were deserted on Sunday.

All major newspapers carried a front-page wrapper emblazoned with a government-promoted slogan “Together we’ll stop this virus”. Buses in central Madrid were empty of passengers.

Bars, restaurants and shops selling non-essential items are shut for 15 days as the country enters a state of emergency.

In a blow to the Spain’s thriving tourist industry, all of its world-famous Easter processions are cancelled.

Britain on Sunday advised its citizens against all but essential travel to Spain.

Spaniards worried about how the lockdown was going to affect them economically.

“I hope it ends soon so I can go back to work,” said 22-year-old airport worker Fabricio, who declined to give his surname, waiting to make a money transfer in central Madrid.

Prime Minister Pedro Sanchez said on Saturday the emergency measures would have a major impact on citizens and businesses, but promised the government would work to lessen the blow.

His wife, Begona Gomez, is among those who have tested positive for the virus, as well as two government ministers.

Spain, where more than half of jobs are dependent on small or medium-sized companies, already has one of the world’s highest unemployment rates.

“This city depends on tourism – what with all the bars and restaurants and shops – this is really going to economically damage many businesses,” said 52-year-old Leonel Sanchez, out to buy food on Madrid’s main thoroughfare, Gran Via.

Spain has had 193 deaths from the virus and 6,250 cases so far, public broadcaster TVE said on Sunday. (Writing by Sonya Dowsett Editing by Frances Kerry)