SA is to go into shutdown, as travel bans are imposed, schools closed and gatherings of more than 100 people prohibited, among other urgent and drastic measures.

President Cyril Ramaphosa on Sunday (March 15, 2020) didn’t mince his words as he said South Africa was looking disaster in the eye.

“The world is facing a medical emergency greater than in a century,” he said in reference to the Covid-19 pandemic.

In a call for “solidarity and compassion”, he outlined the emergency measures South Africa will undertake to combat the spread here.

He revealed that there are now 61 confirmed infections in South Africa, up from 51 earlier in the day. As yet there are no deaths, but the new figures include a new threat: a local transmission. Until now, all infections have been imported from South Africans who had travelled largely in Italy, but also in Iran and the US and then returned to South Africa.

That casts a new pall on things as the spread into vulnerable communities (until now it has been in well-resourced elite communities) may be a threat.

By declaring a national disaster, which in effect suspends certain constitutional rights, Ramaphosa was able to put in place emergency measures that many in South Africa have been clamouring for.

A National Command Council chaired by Ramaphosa will meet three times a week to coordinate the response to Covid-19.

Leaders like Paul Kagame in Rwanda and Ghana’s Nana Akufo-Addo imposed drastic measures even though they had zero to single-digit infections. South Africa has the second-highest rate of infection in Africa, after Egypt.

Commentators said Ramaphosa had acted too slowly, but on the other hand, the government has been on Covid-19 emergency response since January. The National Institute of Communicable Diseases has done an admirable job in the early stage of the pandemic’s presence to prepare the ground and put in place testing and reporting systems.

But charts show that South Africa is likely to still be testing too limited a pool, which may explain why the government is going to deepen testing for those who travelled to high-risk areas from mid-February.

Sunday’s national address was delayed by just over 90 minutes as a nation sat biting its nails. Ramaphosa did not sugar-coat the emergency South Africa, Africa and the world are facing, as he sometimes can do. He said that things would get worse before they got better and that the economy would take a body blow.

“Never before in the history of our democracy has our country been confronted with such a severe situation.”

Government is working with the private sector and labour to design a stimulus package, but with a fiscus running at record debt to GDP levels, this is going to be difficult.

“The integrated and disaster management mechanism is meant to prevent and reduce the impact of the outbreak,” said Ramaphosa, and it allowed emergency and rapid response systems to be activated.

“If we act swiftly with purpose and collectively, we can limit the effect [of Covid-19],” said Ramaphosa.

“Although we may be limiting physical contact and interfering with the rights of people, this can bring us closer together.”

It is a time, he said, for “solidarity, understanding and compassion. Those who have resources, those who are healthy, need to assist those who are in need and who are vulnerable”. 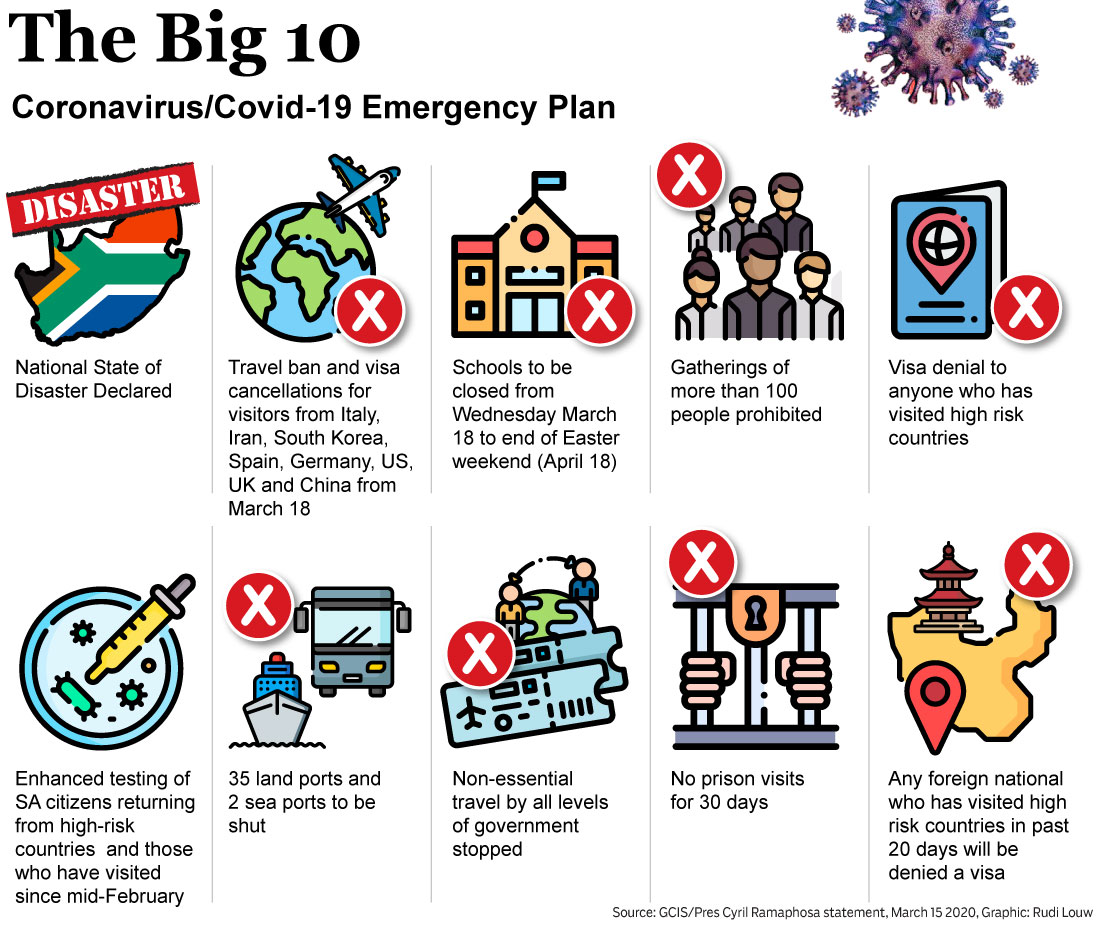 It was a statesmanlike address and the depth and breadth of measures showed that deep Cabinet consideration had gone into it. There are gaps, like information on wider testing and how vulnerable communities will be protected now that transmission is local. But disaster management creates the legal framework for coordinated action.

Ramaphosa thanked those who have been putting in hard graft and he reached out to South Africa to do what it does well: to exercise solidarity in an emergency.

The visas of visitors from Italy, Iran, South Korea, Iran, Spain, Germany, the US, UK and China are now invalid and a travel ban will be imposed from Wednesday, March 18.

New visas to those countries will be denied and the list of countries could be expanded in further travel alerts. The shutdown is much wider as land and seaports are part of the closure.

Schools will be closed from Wednesday, March 18 and gatherings of more than 100 people are now prohibited. This includes the Easter gathering at the ZCC base of Moria in Limpopo, the country’s largest annual religious gathering.

In government, all non-essential travel has been grounded and Ramaphosa urged citizens to follow this method.

“South African citizens are advised to refrain from all forms of travel to or through the European Union, United States, United Kingdom and other identified high-risk countries such as China, Iran and South Korea,” he said.

In turn, South Africans who have visited high-risk countries since mid-February will be subject to enhanced testing as the government ramps up its track and trace on the virus. Prison visits have been suspended for 30 days as the government tries to seal off contact in areas with high infection risk.

These, said Ramaphosa were “urgent and drastic” measures which had required extensive consultations. DM