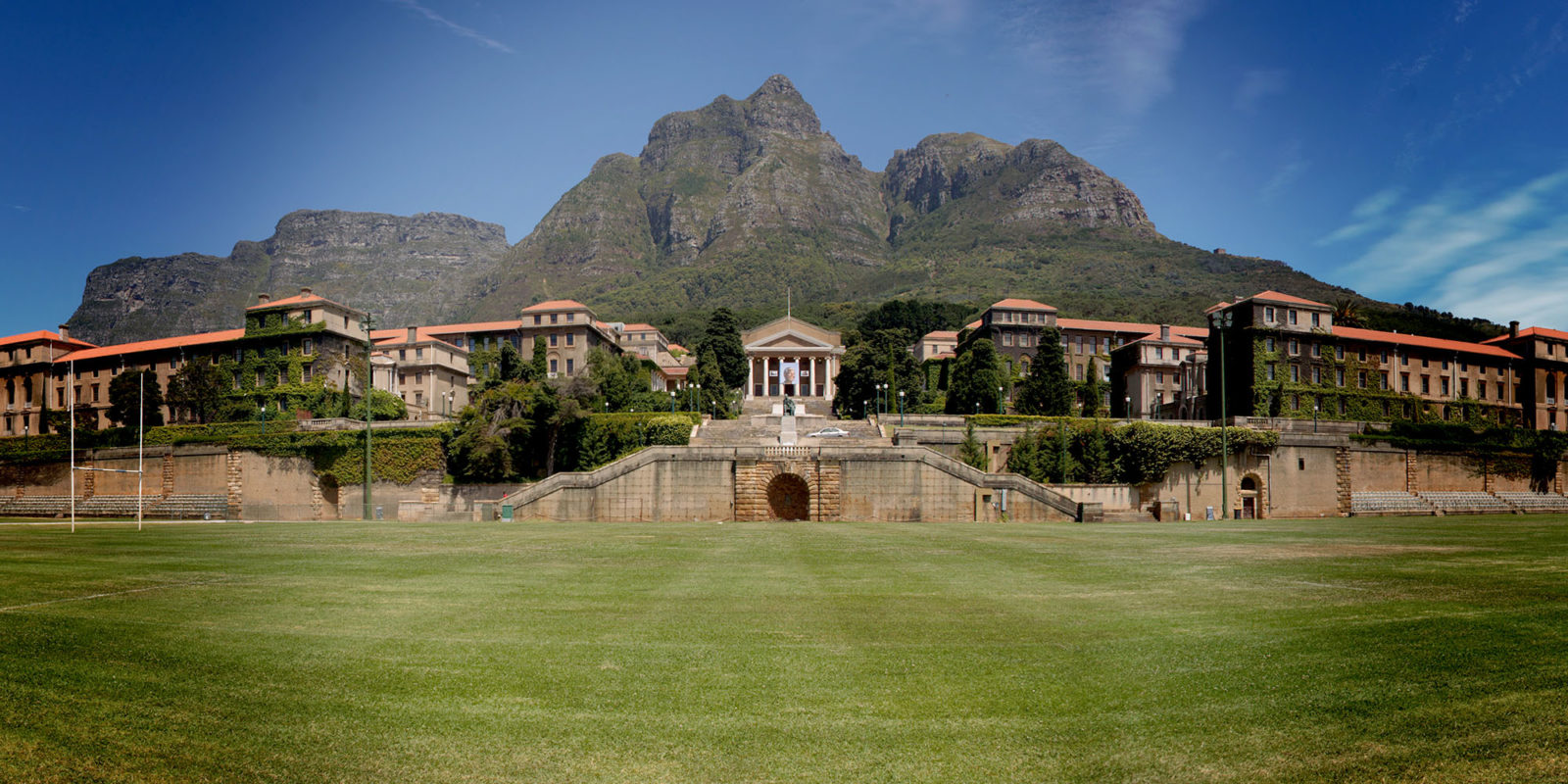 For now, South Africa’s top universities have not indicated any immediate plans to shut down campuses, but steps are being taken to prevent the spread of Covid-19. Wits is waiting for the results of a student who was tested on Friday, while Stellenbosch and UCT have cancelled their upcoming graduation ceremonies and instituted restrictions on overseas travel.

A medical student at the University of the Witwatersrand is in self-quarantine and awaiting test results for Covid-19.

This is according to a statement sent out by the Wits Covid-19 Management Committee on 13 March. The student came into contact with someone who had tested positive for Covid-19 and test results are expected later on Friday.

“The student is being monitored closely and has not displayed any symptoms of Covid-19,” the announcement read. The student is quarantined at home.

Shirona Patel, the Wits communications manager, clarified that student’s particular class had been suspended. Some reports have said the entire faculty closed down.

“Only one clinical activity has been cancelled today. The rest of the medical programme and all other programmes in the Faculty of Health Sciences and the rest of the university continue,” said Patel.

Wits, like many of the other top universities in the country, has implemented short-term measures to prevent the potential spread of the virus on its campuses.

According to Patel, the university’s biometric systems have been temporarily deactivated, hand sanitisers installed in all bathrooms and at strategic exit and entry points (including lifts), staff, students and visitors have been advised to limit non-essential overseas travel, and regular updates are being sent to the community via online platforms.

Tuks (University of Pretoria) has also disabled its biometric systems, while all visitors are required to produce some form of identification before entering the university premises.

Wits is quarantining people returning from high-risk countries as required.

Since January, a number students returning from China have been quarantined for 14 days at a time in residence rooms and private accommodation in line with the Department of Health protocols.

“Healthcare professionals at the University’s Campus Health and Wellness Centre have been trained and issued with the correct protective equipment to interact with students who may be at risk, in conjunction with the NICD. The university is also working with experts in the Faculty of Health Sciences to ensure that students and staff who work in hospitals and clinics receive adequate training, and are issued with the correct protective equipment,” wrote Patel.

Rhodes University has made a transit housing facility available for quarantine, in the event that students become infected and mildly ill.

Seriously ill students will be referred to the Livingstone Hospital which has been pinpointed as the Eastern Cape regional quarantine facility.

UKZN has established a campus health ‘War Room’ to roll out a comprehensive plan to combat the potential spread of the virus on its campuses.

KwaZulu-Natal has the highest number of coronavirus cases in the country at eight.

According to a statement released by the KZN university, a “fully trained team” will work with health authorities and government to manage symptomatic persons, and perform contact tracing in the greater UKZN community.

“… including personal protective equipment, gloves and N95 masks – are also made available if and when required. Other processes and procedures including diagnostic facilities, equipment and support such as effective transportation and institutional readiness are also part of the plan,” the statement read.

The university has also indicated its readiness to work with local and provincial government to contain the spread of the virus in KZN.

Most universities have made their campus health facilities available for information and advice regarding Covid-19.

With regards to travel bans, a number of universities have opted not to institute blanket bans on university-related travel. Many have implemented contingency measures for the time being. For example, Wits requires that Deans and Heads of Schools be informed 48 hours before a member of the Wits community returns from international travel, or when an overseas visitor arrives.

Stellenbosch University, however, has placed a temporary ban on staff and students travelling to and from China, South Korea, Italy and Iran.

Spokesperson Martin Viljoen said Stellenbosch was consulting with the Department of Higher Education, Science and Technology as well as Universities South Africa (USaf) and “the relevant departments of health and local disaster management departments”.

Daily Maverick sent queries to DHET, the day before this article was published, but had not received responses.

Stellenbosch has cancelled graduation ceremonies scheduled for the week of 31 March to 3 April. An email was sent out by the university management to staff and pupils on Friday.

“This decision, which was not taken lightly, will mitigate the risks associated with large gatherings and exposure to individuals who may have travelled internationally,” the email read. All graduands will receive their qualifications in absentia.

The University of Cape Town has followed suit and also cancelled the March graduation ceremonies, which were scheduled to start on Thursday, the 19th.

“In making this decision, we considered not only the risk of bringing thousands of people into close contact in Sarah Baartman Hall, but also the risk faced by those travelling to Cape Town for these events,” the announcement from Vice-Chancellor Mamokgethi Phakeng read.

The university has also decided to cancel or postpone any UCT-related conferences and events until the end of June 2020, which includes the installation ceremony for its new Chancellor, Dr Precious Moloi-Motsepe, which was scheduled for Monday, 16 March.

So far, it seems other top universities are going ahead with graduation ceremonies.

Rhodes University has indicated that should the situation “deteriorate significantly in the next few weeks” graduation plans may be cancelled/postponed.

Rhodes University, however, has said exchange students and staff from high-risk countries are barred from coming to the university until further notice.

Students from Rhodes are also barred from going on exchange to high-risk countries (unless going home).

UCT has said travellers going to high-risk areas will no longer be covered by the university’s insurance as from 4 March. They have also urged their community to consider postponing receiving international visitors, especially from high-risk regions.

For now, universities have not indicated any immediate plans to shut down campuses, but remote-learning options are being explored.

Patel, from Wits, says the university can switch to remote/online learning if required, “… although with adaptation of the academic programme. For example, we may need to think about conducting the theory online followed by practical training later. This is possible, but not an easy task given that Wits is a contact teaching university.”

UCT has not indicated whether it will adopt an online learning approach, but during the 2015 and 2016 #FeesMustFall protests, the university switched to blended learning while the campuses were shut down.

On 12 March, all United Herzlia Schools in the Western Cape (eight campuses) closed down, after a parent was thought to have contracted Covid-19 after presenting with symptoms. The test results were due to be confirmed on Thursday.

Other schools in the Western Cape, and across the country, remain open.

But the Department of Basic Education warned South African schools to prepare for closure in the event of community-level outbreaks. This was said in an interim policy to deal with Covid-19, which was circulated on Thursday. Emphasis was made that decisions for learners to stay home, based on possible exposure to or infection with Covid-19, should be justified by available scientific evidence.

Countries such as China, the United States, Denmark, Italy and Ireland have shut down universities and in some cases schools.

More than 100 universities in the United States have cancelled in-person classes and moved online.

Ivy League institutions like Harvard, Columbia and Stanford University announced earlier this week that students must pack up and leave the campuses (including residences) with Harvard students given just five days to vacate.