Biden looms large — but will fading Sanders reach across to his adversary? 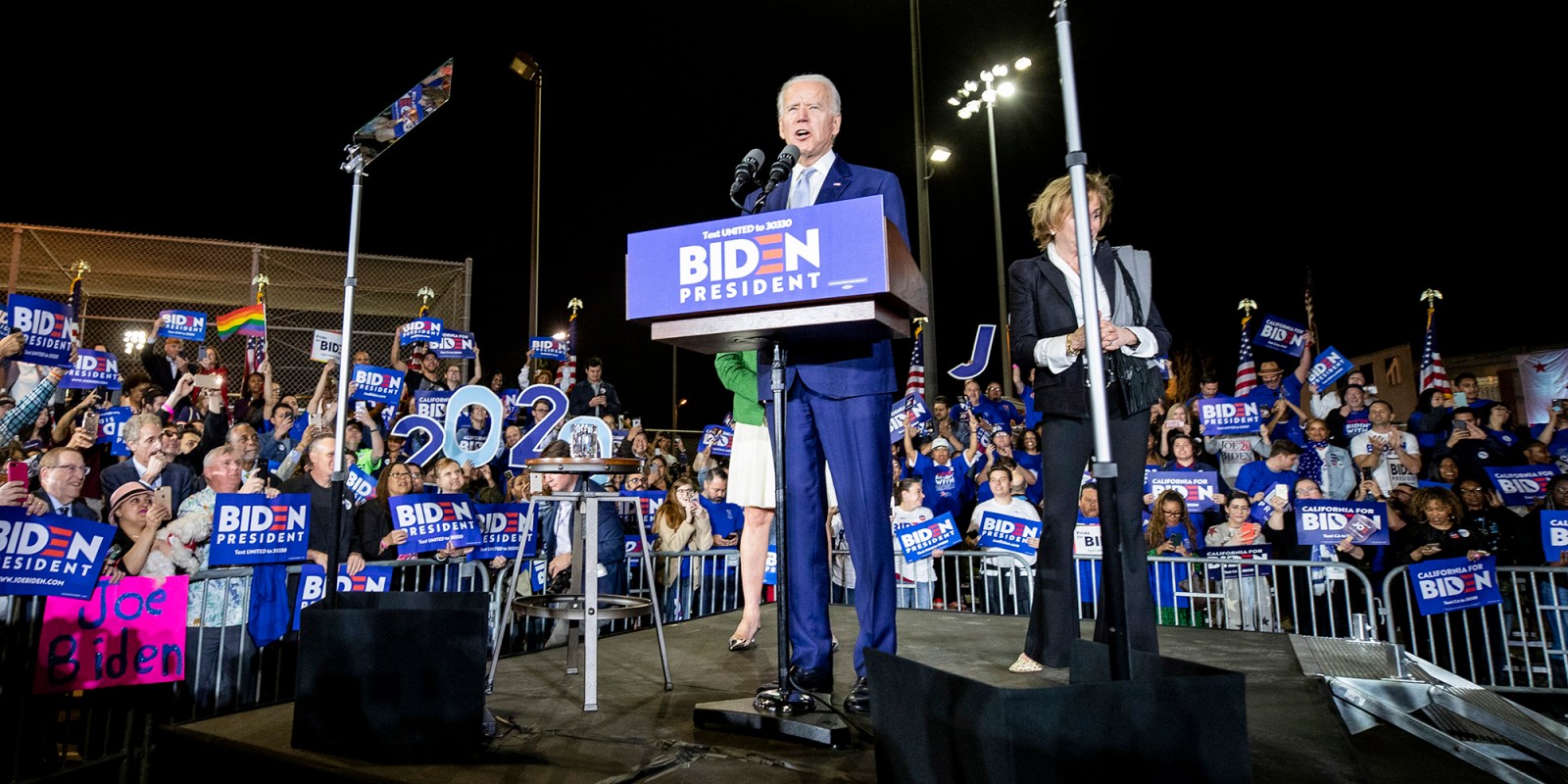 The Democratic Party’s primaries have made it increasingly likely that former vice president Joe Biden will be that party’s nominee in the 2020 general election. Meanwhile, the incumbent president, like some kind of smirking Dr Pangloss, has made a hash of the country’s response to the Coronavirus and the growing financial crisis.

It didn’t seem possible, but the ongoing series of Democratic Party primary elections to pick the party’s candidate to face off against President Donald Trump in the November general election has almost — but not quite — been bumped off the front page of the national consciousness. The competing stories are, of course, the ongoing Covid-19 pandemic and its consequent effect on global economic, financial and commercial networks.

These three themes are deeply interconnected, and we shall get to that, but first, a brief catchup on the Democratic race. By the end of a week that began on 9 March, former vice president Joe Biden had continued his winning ways, crushing his opponent, Vermont Senator Bernie Sanders, in the majority of the primaries that took place on 10 March. Most important of those primaries, in terms of trends as well as the gaining of convention delegates, was the state of Michigan.

Back in the 2016 Michigan primary between Sanders and Hillary Clinton, Sanders had been very strong against his opponent. This time around, however, things were entirely different, with Biden winning across the state and with nearly every identifiable demographic slice of the voting population.

Commentators now argue that the 2016 result was much more a reaction against Clinton than it ever was a vote of confidence in Sanders’ ability to gain the nomination and beat Trump in the election that year. And, crucially, therefore, it was less a ringing endorsement in his prescriptions for a revolutionary change in the shape of the American economy than in the dislike by voters of the former secretary of state.

As Politico described the new result, “Biden had a spectacular showing on Tuesday, winning every single county in Michigan and blowing Sanders out in three other states that voted, essentially sealing the nomination by leaving his lone rival no plausible path forward. But the big takeaway from the day’s big prize, Michigan, isn’t that Biden is a spectacular candidate. The big takeaway is that he doesn’t need to be.

“Two things happened on Tuesday in Michigan. First, Democratic turnout exploded. Second, Biden performed far better with key demographic groups than Clinton did four years ago. If either one of those things happens in November, Trump will have a difficult time winning the state again. If both things happen, the president can kiss Michigan’s 16 electoral votes goodbye — and with them, more than likely, the electoral votes of Wisconsin and Pennsylvania. There goes the White House.”

After Tuesday’s results, Sanders could not bring himself to deliver remarks to his supporters that night, perhaps because the candidate and his advisers were debating about whether to continue the fight; or, perhaps, to begin the nearly inevitable reaching across to Biden. Or perhaps his reason was his mulling over another effort to rally his troops, his movement, his diehard supporters for one last run at building up his delegate count, even if Biden wins more of them, faster, in the remaining period up to the national nominating convention in Milwaukee, Wisconsin on 13-16 July.

Meanwhile, Joe Biden is now faced, increasingly, with the delicate task of reaching out to Sanders-the-candidate, as well as Sanders’ army of would-be revolutionaries who, presumably, want nothing more than the wholesale overturning of the economic and political order. Nothing Biden can do or say will appease that maximalist position. But he can begin to redefine — delicately — the character of this year’s political landscape as one where the pre-eminent issue is beating Donald Trump and by simultaneously taking the plunge of embracing some of the Sandernista ideals, aims, and goals, if not their revolutionary impetus.

Perhaps this will come in reshaping some of his rhetoric (there is rather less of a difference between the two candidates than the rhetoric flying back and forth would indicate), or even in promising to study the entire healthcare financial/insurance system once he is in office. But Biden will need the energy of those Sanders supporters, even if Sanders himself could never manage to harness those persons’ actual votes, if he is to win, come November.

The next primaries through to the end of March are likely to mimic Biden’s wins in Michigan and Missouri and in the South; 17 March brings votes in Arizona, Florida, Illinois, and Ohio; 24 March has one in Georgia, with more coming in April and May, including New York, Pennsylvania, Wisconsin, and the remaining, largely Southern and Western states, until all 3,979 delegates are selected. Victories in big states such as Ohio, Illinois, and Florida, now increasingly predicted from the polling, will push Biden ever closer to his nomination.

Now, perhaps, the only thing that will tip the competition back into being a horse race is if Bernie Sanders turns the Sunday evening debate between the two men in Phoenix, Arizona into a nationally (even internationally) televised embarrassment for Joe Biden. It is possible that Sanders will push Biden very, very hard that evening. Sanders’ political stance is long-established and well-articulated through years of advocacy, and that kind of concentration and ideological positioning can make for some excellent debate theatre.

Meanwhile, Biden has been trying — sometimes less than articulately — to portray himself as a unifying, calming, oil-upon-troubled-waters among the party faithful, and for the full range of constituencies and demographics. His position is to come across as a soothing veteran candidate, with moderate, liberal-reformist inclinations, and with an abiding desire to return to the warm embrace of the universe of the Obama (“and Biden”, as he would add) years.

It should be a fascinating bit of evening television entertainment. Either the sparks will fly with Sanders portrayed as a kind of American-style “bittereinder”, or viewers will begin to see the unmistakable signs of the rapprochement-to-come between the two men.

Meanwhile, Covid-19, the disease caused by coronavirus, continues to extend its malign impact on the world’s trading, economic and financial, and travel networks — as well as commercial life in a growing list of cities and nations, and even national and international sports schedules such as the cancellation of the National Basketball Association’s games and the postponement of the NCAA university basketball championship tourney.

The questions about the continuing lack of the availability of testing and testing kits, the global trajectory of the growth in infection, as well as the growing spread of infection to yet more nations, the likelihood of a vaccine, let alone useful treatments continues to seize the attention of health professionals, politicians and ordinary citizens in America.

What has not happened, of course, is any real sense of actual presidential leadership in dealing with this crisis, other than to say the country and his administration is doing a great job. And all is for the best, rather like an odd, grinning, real-life Dr Pangloss. Then, suddenly, seemingly out of the blue, the president announced a freeze on Schengen zone European travel into the US, although Americans returning home were exempt, as were citizens of the UK and Ireland.

This decision was taken despite the admonitions of leading healthcare professionals that it wasn’t worth the trouble since the disease was already on the loose in America anyway. What this decision did do, however, was to roil international stock markets and international confidence in American leadership even further. The markets have been falling almost continuously for well over a week, wiping out value at alarming rates, with a Dow Jones average hovering around 21,000 points.

At this rate, soon enough, the market will be back to the levels where they were when Trump first took office. While stock markets are not the same thing as the actual, physical economy, they can mirror investor confidence and the growing collapse of a banking system or the stalling of the economy.

But most important of all, these two crises — the economic and the medical — take out of the president’s hands the argument that his business acumen and leadership have delivered a fine, fit economy. That would give the Democratic Party’s eventual candidate the best of all possible political arguments: that the Trump administration has been a financial and administrative disaster, and the sooner it goes out the door and into the dustbin of history, the better.

It will be ghoulishly fascinating to see how much the two Democratic debaters focus on Sunday on the Trumpian chaos, and how much on each other’s flaws, foibles, and failings. DM