Shades of SAA as new Zambia Airways prepares for take-off 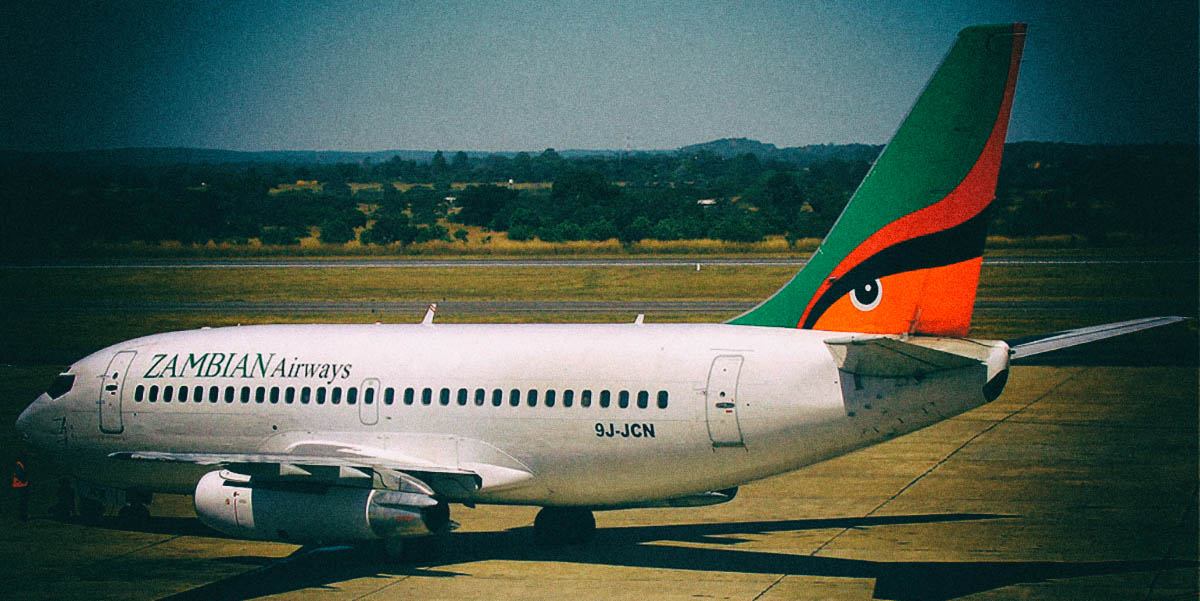 The Zambian government is facing heavy criticism over the decision to relaunch its national carrier, Zambian Airways. (Photo: Wikimedia)

While the South African national carrier is struggling through business rescue, there is a controversial attempt to relaunch its northern counterpart.

The Zambian government’s decision to engage Ethiopian Airlines to relaunch the national carrier will cost Zambia a cool $700,000 (R11.25-million), a month in aircraft leasing charges, a well-placed government source told the Makanday Centre for Investigative Journalism.

The government is facing heavy criticism over the decision with concerns focused on the business plan, which is a closely guarded secret.

A senior member of the ruling Patriotic Front’s (PF), central committee also questioned the role that President Edgar Lungu is playing in the project, saying it was pushed through without consulting the party’s top structures.

There are allegations that the Civil Aviation Authority (CAA), is coming under pressure from the government to issue an operator’s certificate before legally required processes have been completed.

A set of questions was sent to the president’s office. No reply had been received at the time of writing.

It is understood that an initial investment of $30-million (R480-million), is required to launch the airline under a joint venture agreement that will see Zambia holding 55% through the country’s Industrial Development Corporation (IDC) and Ethiopian Airways holding the balance of the shares.

The new IDC-controlled company is called Zambia Airways (2014) Ltd. A well-placed source said its fleet would be provided by Ethiopian Airlines and leased for $700,000 a month.

The figure does not include other expenses such as maintenance and insurance.

It is not clear where the venture’s start-up capital is coming from. Mutotwe Kafwaya, the minister of transport and communication, has not given a clear response to this question.

Ethiopian Airlines has not responded to an emailed query about accusations it is selling the Zambian government a deal that is not in Zambia’s interests.

Former employees of Zambia Airways who formed an independent company called Zambian AirWorks believe that the best approach is a public-private partnership anchored in funding from private sources, either local or foreign.

“During the past 30 years, most of the world, including Zambia, has learnt the folly of government-owned airlines,” said Captain Alick Sakala, one of the company’s founders.

Addressing the parliamentary committee on transport in 2018, Sakala said: “We propose a private sector and market-driven airline. The IDC could play a part in sourcing investment either locally or [abroad].”

Sakala is not involved in the current IDC initiative.

In 2016, at his first press conference as president, Edgar Lungu “deferred” the formation of the airline “until such a time as the economy is able to afford the high establishment costs”.

Economic indicators show that the country is in a worse state now than it was in 2016.

According to the African Development Bank, public debt has rapidly increased to 80% of GDP at the end of 2019 from 35% at the end of 2014. Rising inflation is expected to reach 9% in 2020-21, pushed by large exchange rate depreciation and food price increases.

Zambia’s rolling electricity blackouts, lasting up to 18 hours a day, are a further challenge to the project. The country is unable to import power to cushion the economy.

Another sign of the faltering economy is the government’s failure to honour a contract with the Russian government for the supply of a Sukhoi Superjet 100 in the VIP version, reportedly for Lungu’s use. The two countries also discussed the supply of four more of these aircraft.

Russia’s industry and trade minister, Denis Manturov, was quoted as saying at the Russia-Africa Forum in October 2019 that the decision to cancel the deal “was because Zambia does not have enough funds to finance the contract”.

The Centre for Trade Policy and Development, an economic think-tank, argues that using state funds to launch the airline will increase the government’s financial burdens.

Research by the centre contends that the agreement should be harmonised with Ethiopian Airlines Vision 2025 agenda, which would mean operating the airline as a regional carrier, at least in its early stages.

A senior member of the PF’s central committee, who asked not to be named, complained that “the matter has never been discussed in the committee’s meetings”. He added: “It was on the agenda of one of our meetings in 2018, but the president merely informed us about the decision to partner with Ethiopia.”

Another ruling party source asked: “Why is government insisting on spending taxpayer’s money on the airline when there are private people who are willing to invest in it?”

A source at the CAA complained that officials looking into certification were coming under pressure from the government.

“It is our legal mandate to ensure that we do our professional work,” said a source. “But there is pressure from some top government officials who want us to ignore certain procedures and hand out the certificate quickly.”

Speaking recently on a local radio station, transport minister Kafwaya insisted that “no money will come from the treasury”.

“The IDC looks after parastatals, it’s a quasi [quasi-government institution], so I don’t know why that’s not a good enough model,” he said. “It’s not drawing money from the treasury, so keep the treasury away from the conversation …”

Despite continuing uncertainties, the groundwork has mostly been done.

The board of Zambia Airways, led by former attorney-general Bonaventure Mutale, is in place.

The chief executive officer, Bruk Endeshaw-Abebe, was appointed early in 2019. Endershaw was Ethiopian Airlines’ sales and services director for the southern region.

He was recently quoted in one of the local daily newspapers as saying Zambia Airways would operate eight aircraft – three Bombardier Q-400, two Boeing 737-800 and three Boeing 787-800 – suggesting that it plans to fly some long-haul routes.

However, former transport minister Brian Mushimba said in parliament in 2018 that the airline “will start with three planes that are going to service a few regional and domestic routes”.

The IDC – the parent company – did not respond to an emailed press query on the source of the airline’s startup capital and who is paying Endeshaw’s salary, which is rumoured to be gigantic despite the airline not yet being operational.

Endeshaw did not reply to text messages or phone calls aimed at soliciting his comment.

The airline is not yet listed among the portfolio of state-owned companies on the IDC website.

When the board appointed Endeshaw, it directed him to target the start of the airline for the third quarter of last year.

This requires clearance from the CAA, which has not yet issued the air operators’ certification. Endeshaw was quoted in the local media as saying this “is still in progress, therefore, it will take to air once the certificate is issued”.

Mushimba, the former transport minister, did not specify the type of planes, but added that at full capacity, the airline will employ about 500 people.

Sakala, from Zambian AirWorks, favours planes that have been operated in Zambia before as “it will reduce the cost significantly”.

He said Zambia Airways once operated Boeing and ATR aircraft, and the country still has expertise in maintaining and flying these planes.

“This makes it possible for the airline to put together a maintenance organisation,” he said. “In addition, both pilots and maintenance engineers could be sourced from the diaspora where they relocated after the closure of the airline.”

The national airline has been a flagship project for the ruling PF since it first formed a government in 2011.

The first technical committee appointed in 2013 to oversee the project worked with experts from the former Zambia Airways to draw up a business plan and make recommendations on which aircraft to purchase.

The committee recommended buying an ATR 42-600 for domestic routes which would then feed into the Boeing 737 700 or 800 for regional routes.

The government ignored the plan.

The project was plagued with challenges from the outset, ranging from where to source the planes to interference from government officials.

There have also been loud calls for the government to make public the findings of the liquidator’s report on the old Zambia Airlines before another airline is launched. There are major questions over how the national carrier’s assets were managed after it closed in 1994.

“ZA [Zambia Airlines] had assets in New York, London and many other places around the world,” said one former employee. “We want to know what happened to them, because we are told that some senior government officials benefited.”

Zambia has joined Malawi by buying into Ethiopian Airlines’ strategy of expanding its base at Bole International Airport, Addis Ababa, to include important geographical hubs.

In 2013, the airline acquired a 49% stake in newly founded Malawi Airlines, based in Lilongwe.

However, in 2017, Malawian MPs questioned the partnership between the airline and its Ethiopian counterpart, saying it was not beneficial to the country.

They demanded a report from President Peter Mutharika’s government on how much Malawi had benefited from the partnership.

In 2010, Ethiopian Airlines helped to establish Asky Airlines in Lomé, Togo. Further investments were made in Ethiopian Mozambique Airlines and Tchadia Airlines in Chad.

The targets are ambitious: By 2025, the airline plans to have an annual turnover of $10-billion, a fleet of 120 aircraft and 90 international destinations. DM

This story was produced by the Makanday Centre for Investigative Journalism Zambia, in association with IJ Hub, a non-profit that serves investigative journalism in the region.