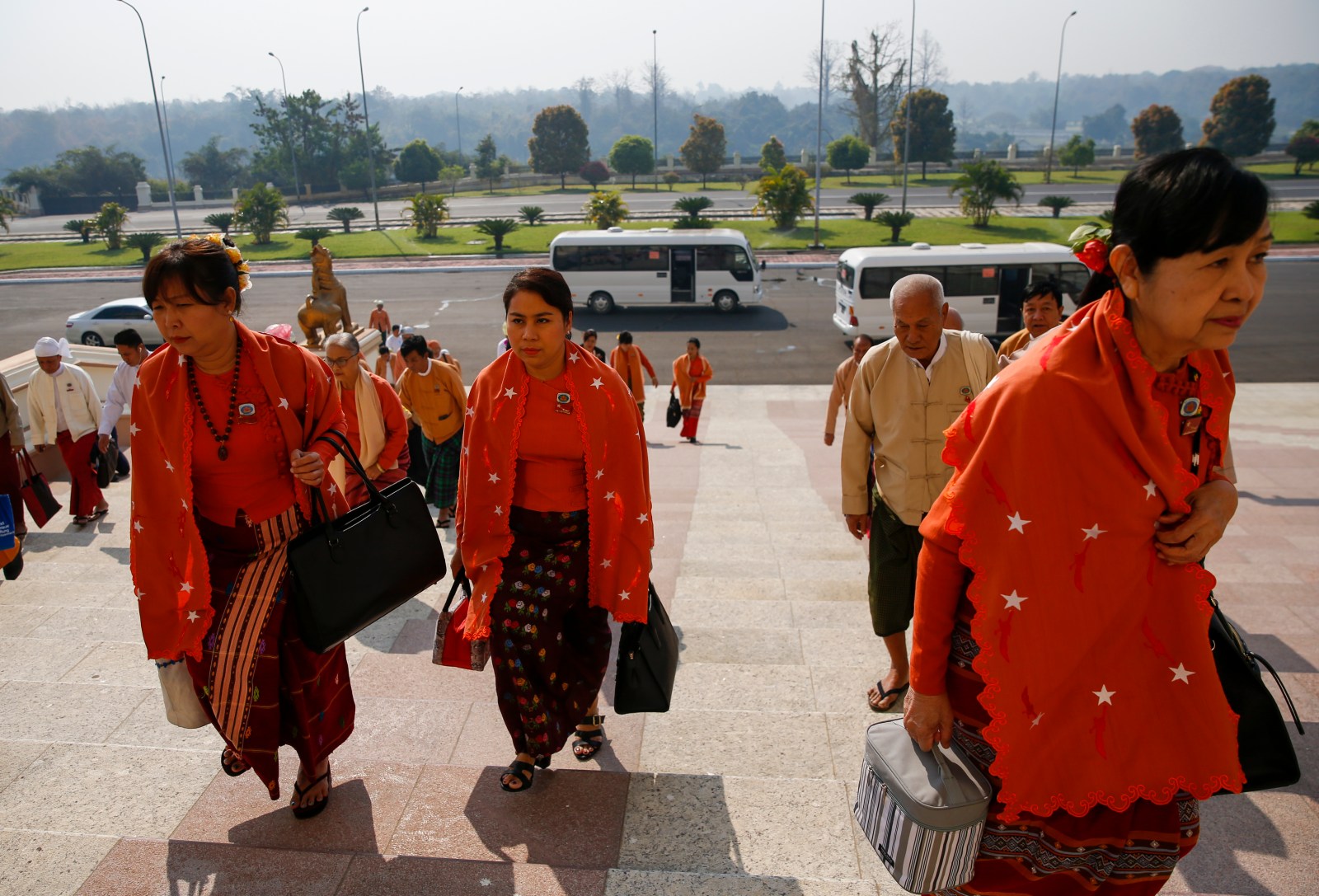 epa08282489 Members of parliament from National League for Democracy (NLD) party, led by Aung San Suu Kyi, wearing protective face masks arrive to attend the Assembly of the Union (Pyidaungsu Hluttaw) at the parliament building in Naypyitaw, Myanmar, 10 March 2020. Myanmar parliament begins the voting on amendment proposals to the military-drafted constitution to reduce the involvement of military's role in parliament. EPA-EFE/LYNN BO BO

BANGKOK, March 10 (Reuters) - Myanmar’s parliament blocked a bid by the party of leader Aung San Suu Kyi to reduce the role of the military in politics on Tuesday, almost a decade into a troubled democratic transition.

In the first day of voting on a series of proposed constitutional amendments, lawmakers vetoed changes backed by the ruling party that would have altered the 2008 charter drafted by the former ruling military junta.

The rejected amendments would have gradually reduced the number of military MPs, over a period of 15 years, and abolished a section that names the commander-in-chief of the defense services as the “supreme commander of all armed forces”.

The constitution guarantees military members of parliament a quarter of the seats in the legislature. Any changes to the charter require the approval of more than two thirds of lawmakers, giving the army an effective veto.

Lawmakers also rejected removing the word “disciplined” from the definition of the country’s political system as a “genuine, disciplined multi-party democratic system”.

But they approved an amendment that would allow civil servants to belong to political parties.

Nobel laureate Suu Kyi has been under pressure to show progress on constitutional reform – seen as a major stumbling block to democratic hopes – ahead of a general election expected later this year.

She took power in 2016 after a landslide election win, vowing to continue democratic reforms that began in 2011 and end the country’s long-running civil wars.

Since then, the administration has come under foreign pressure over a 2017 military crackdown against the Rohingya minority, as well as escalating ethnic conflict.

Myanmar has been accused of genocide at the International Court of Justice in the Hague but denies the charges, saying it was carrying out a legitimate campaign against Rohingya militants who attacked police posts.

Voting on other proposed amendments will continue until March 20, although analysts say the military veto means they are unlikely to pass.

Key sections the NLD aim to reform include one that blocks Suu Kyi from the presidency on account of her foreign-born children, who are British citizens. (Editing by Nick Tattersall)