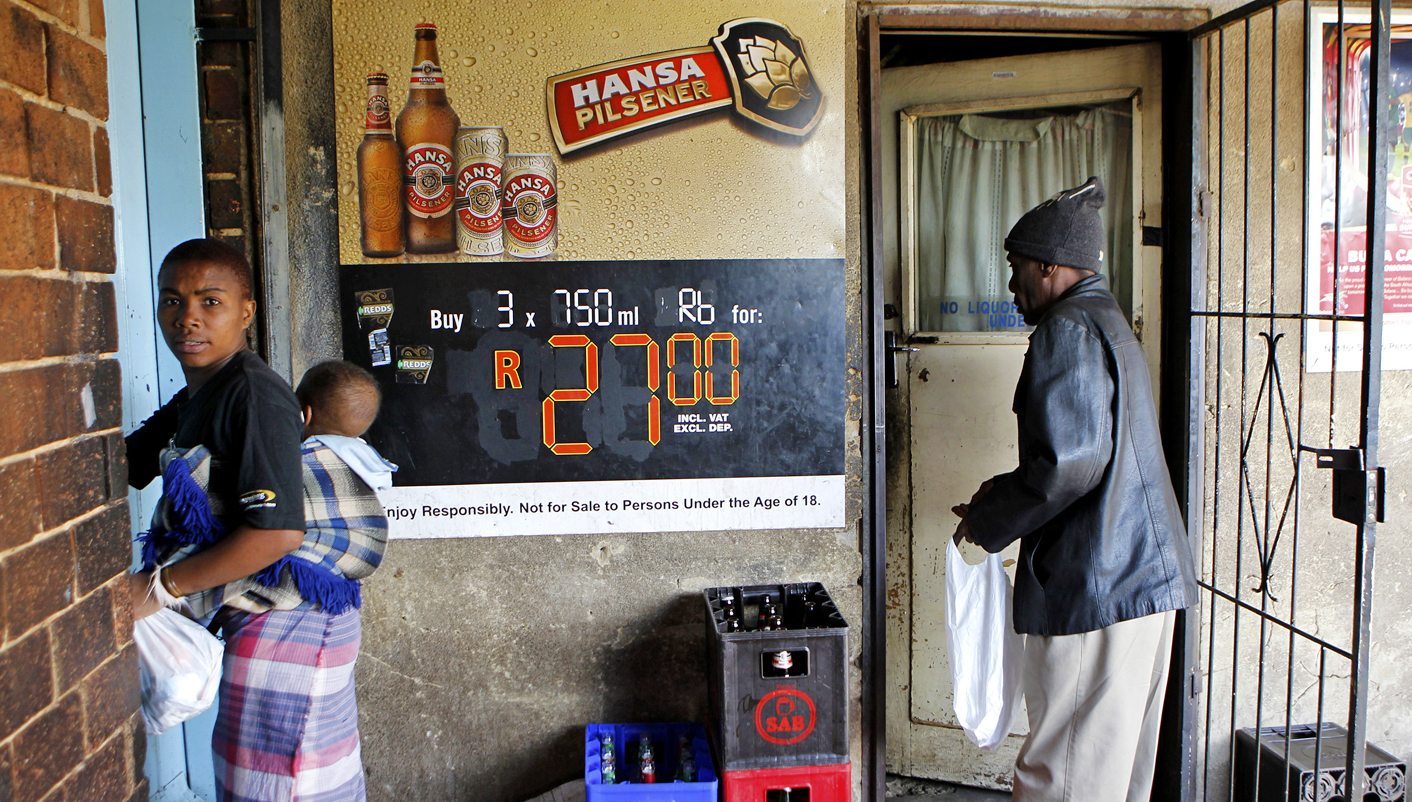 Focus group discussions among women in rural Rwanda consistently rank alcohol as the number one factor for violence against women. Stories of victims and the concerns of women in South America, India and South-East Asia are very similar and put a human face to the alcohol-fueled epidemic of gender-based violence.

This battle is ongoing and yet, these women remain largely unheard, the evidence remains largely unnoticed and the concerns remain largely ignored in the global health community and women’s rights movement.

Why that is the case is illustrated by a new groundbreaking report from the gender equality and health equity collective Global Health 50/50 entitled “Power, privilege and priorities”. I’ve participated in the meetings of the Commission on the Status of Women for almost a decade and have yet to see that the women’s rights movement takes the voices, experiences and concerns of our sisters affected by alcohol-fueled violence seriously.

I’ve been working with global policy-making processes at the World Health Organization for more than a decade and we have yet to see that alcohol harm becomes an integral part of the work to promote women’s health – commensurate with the alcohol harm women and girls suffer. The reason for these blind spots is not the lack of evidence. The reason is something else as outlined by the new report:

“… the continued expression of historical power imbalances, inadequate progress on gender equality and diversity within organisations, and the systemic lack of attention to major burdens of disease and the role of gender in driving ill-health.”.

In my work, I use alcohol harm as a distinct perspective to illustrate these problems.

For example, alcohol is a major obstacle to development, adversely affecting 14 of 17 Sustainable Development Goals. Alcohol harm affects women and girls disproportionately – even though women have in general much lower rates of alcohol consumption.

In eroding household financial stability, fueling gender-based violence in the home (SDG5) and public space (SDG11), in fomenting the vicious cycle of poverty, ill-health and marginalization (SDG1), in jeopardizing household spending on healthy food and investments in education (SDGs 2, 4), and in contributing to mental, physical ill-health of women and girls (SDG 3) alcohol contributes a substantial burden. It is a women’s rights issue.

For decades, the alcohol industry has invested gigantic resources in marketing campaigns that have fomented and perpetuated harmful stereotypes and gender roles. The sexualization of women in alcohol ads has been pervasive around the world and continues to be a major problem in low- and middle- income countries. In high-income countries, however, the alcohol industry has recently shifted from dehumanizing women in their marketing campaigns to targeting women with alcohol ads to conquer a “new and emerging market”. Cynically, they are now marketing alcohol in the context of female emancipation, liberation and empowerment.

These examples highlight an exploitative system and we must ask two tough questions: is the global health community part of the problem and if and how they can be part of the solution?

I believe that we can learn a lot about our societies when we analyze their responses to alcohol harm. Among other things, this tells us about the functioning of our democracies, power structures among decision-makers and opinion leaders, the commitment to human rights protections or lack thereof, tolerance of social injustice, levels of health literacy, awareness of and the recognition of predatory commercial activity, and the ability of communities to conduct effective, intersectoral and coherent policy-making.

In this context I consider two findings of the Global Health 50/50 report particularly trailblazing. The first is that ”historical power asymmetries continue to plague the global health system, which are rooted in imperialism, post-World War II governance structures and patriarchal norms and practices.”

Alcohol harm remains a significant blind spot in the areas of women’s health, especially sexual and reproductive health and rights, violence against women as well as women’s mental health. For example, in high-income countries we face growing alcohol addiction and liver cirrhosis crises among women. But the global health community remains slow to respond.

The fact that the Global Fund to fight AIDS, Tuberculosis and Malaria found it appropriate to launch a partnership with Heineken, the world’s second largest beer giant, speaks volumes about the blind spot of alcohol in the area of infectious diseases; and it reveals the lack of understanding of the fundamental conflict of interest of Big Alcohol in global health. The partnership is still not terminated, even though Heineken’s track record of exploitation of women and girls has been well documented and keeps growing.

These power asymmetries play an important role in determining which women get a say and are acknowledged in the global policy-making processes – and it is evident that the most vulnerable and marginalized women, such as those taking part In focus groups on alcohol harms around the world, remain excluded.

This is not “just” a problem of representation. It has direct negative consequences on the ability of the global health community (and the women’s rights movement) to get behind high-impact, sustainable solutions, to some of the biggest challenges that women and girls are facing.

In this context the Global Health 50/50 report emphasizes that:

“global attention has not kept pace with changing global health needs and is failing to take gender seriously. We find a startling mismatch between global burdens of disease and the stated priorities of global health organisations and funders.”

As recently as February this year, members of the Executive Board of the World Health Organization agreed that alcohol harm should be a “public health priority” and that accelerated action is urgently needed. Over the last decade, alcohol policy-making had virtually disappeared from the radar of the global health community – with severe consequences.

Alcohol availability is increasing. And its  consumption is projected to grow globally. And alcohol harm is increasingly occupying a larger  proportion of the global burden of disease. Progress to reduce alcohol consumption and harm remains off track.

Every 10 seconds a person dies due to alcohol, yet there has never been a global ministerial conference and alcohol remains the only psychoactive, dependence-producing substance not under international control.

Evidently, the report is absolutely correct with the assessment that there is an appalling mismatch between the harm and burden caused by alcohol and the attention paid to it and resources invested into addressing it. The evidence of a system in need of urgent change is clear – for alcohol policy in particular and for global health in general.

For example, implementation of the three alcohol policy ‘best buys’ would result in a return of $9 for every $1 invested. Over 50 years, a 20% global increase in alcohol taxes alone could avert nine million premature deaths and could accumulate as much as $9tn in increased revenues. Evidence also shows that the best buys have catalytic effects for other health and development goals.

Making alcohol policy a priority would have significant  impacts on the health, well-being and equality of women and girls as well as boys and men and transgender people, too. There are strong reasons why both the women’s rights movement and the global health community should start paying greater attention to alcohol prevention and control.

And finally, I am struck by another powerful message in the Global Health 50/50 report. It argues that:

“The skewed distribution of power, privilege and priorities is undermining global efforts to reach the health-related Sustainable Development Goals. It is time to face up to the uncomfortable questions of whose interests reign in perpetuating the present governance arrangements in global health.”

In this spirit, it is high time that the interests of the most marginalized and vulnerable women and girls find representation and priority consideration.

More than a hundred years ago women joined forces in industrialized countries to tackle pervasive alcohol harm in their homes, communities and societies; they organized, campaigned, protested and made a lasting difference. While we would likely choose other methods for the feminist struggle today, the women showed us the potential of making alcohol policy a priority. They went on to win women’s voting rights, to found the international peace movement and to spark the thriving global women’s rights movement.

Today, it is time we broaden the movement, follow the evidence and overcome structural obstacles to win the battles of our time. DM/MC