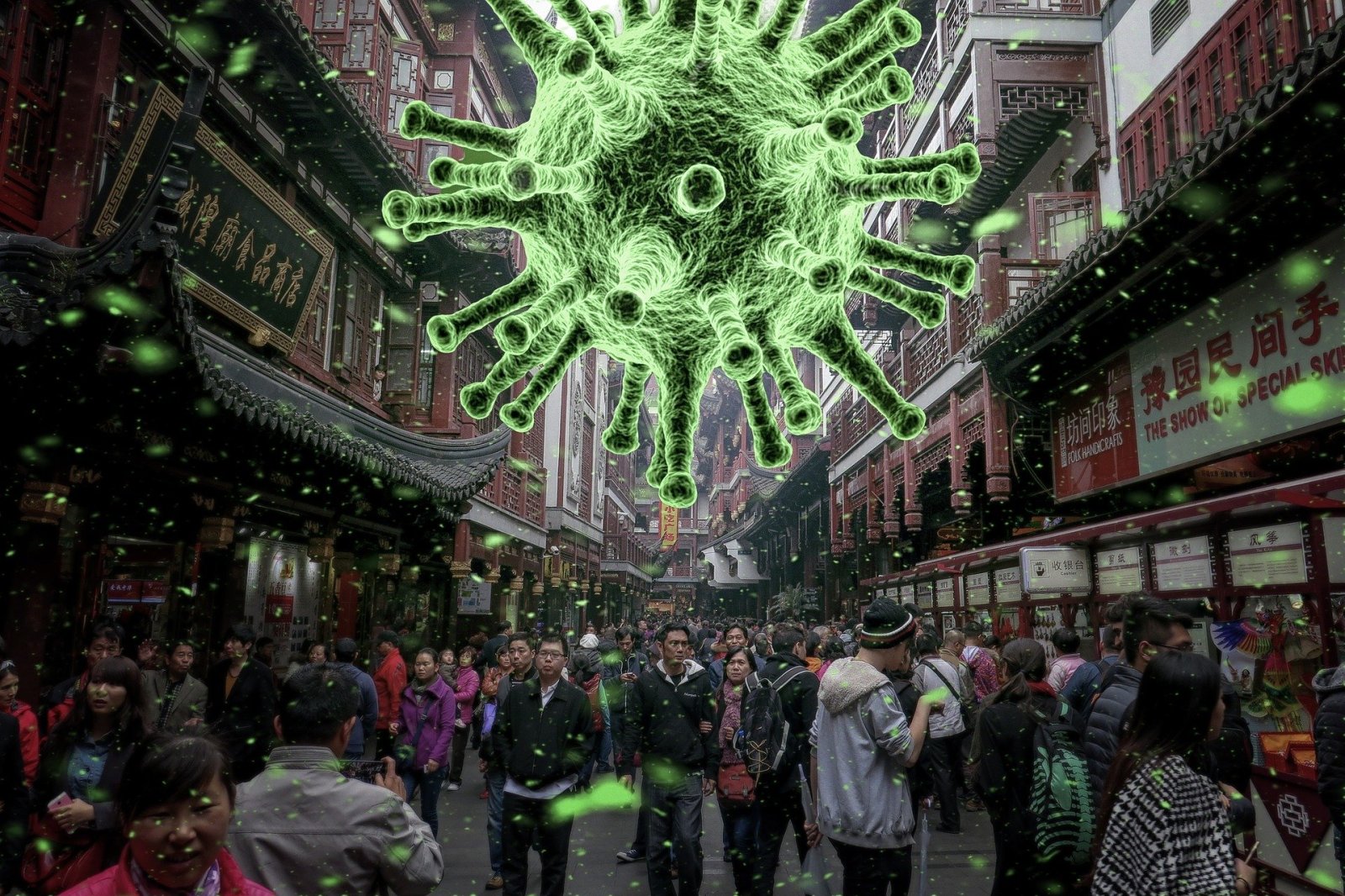 Illustrative image of coronavirus in a street. (Source:Pixabay)

Parliament also needs to take the initiative and appoint a Standing Commission on Health Security to provide oversight of government measures in preventing, detecting, mitigating, responding to and assisting community recovery from all catastrophic events.

The coronavirus SARS-CoV-2 (known as Covid-19) has arrived in South Africa. It was just a matter of time. Four months into the outbreak, it is part of an ongoing epidemic that takes a mighty struggle to contain. The virus efficiently transmits from person-to-person. The medical community quickly realised that some infected people do not develop symptoms and others contract a mild disease. That is good news as the original estimates of how deadly the infection can be were probably too high. It is much less deadly than originally thought.

The bad news is that – as far as hitherto established – it does kill the elderly and individuals with pre-existing medical conditions. Further bad news is that infected people with no or mild symptoms are contagious and can transmit the infection. Avoiding being around sick people is therefore not enough to minimise or prevent exposure. Anyone, anywhere, can be a potential transmitter and the public health system – and individual hygiene practices – must be primed to deal with the undetected spread.

Preventing a novel virus such as Covid-19 from spreading in an immunologically naïve population is hugely challenging even for the best prepared countries. The United States came out tops out in the October 2019 Global Health Security Index (published by the Nuclear Threat Initiative, Johns Hopkins University and the Economist Intelligence Unit), which assessed all 195 countries globally, and yet it is struggling to roll out an effective testing regime, which is key to surveillance.

South Korea, 9th in the index rankings, ran better testing programmes, albeit in a significantly smaller country, but banned gatherings and curtailed domestic air, train and other public traffic too late. Italy, ranked 31st, has good surveillance, but poor response systems and Iran, ranked 97th, failed on almost every preparedness, detection, response and health system resilience count and, not being a democracy, made things worse by being untransparent in their reporting to both their citizens and the international health community.

As the 87th country to be affected, what lessons should South Africa learn from other countries’ mistakes, missteps and weaknesses in response? First, South Africa has a well-regarded disease intelligence detection and reporting system (it scored among the highest index marks for these specific technical assessment areas) led by the capable National Institute for Communicable Diseases (NICD), but it lacks the human resources, technologies and budgets to operate under surge scaled-up conditions.

In the recently released multi-authored book Vital Signs: Health Security in South Africa (Brenthurst Foundation, 2020), we point out that the health security related budgets for disease intelligence, laboratory services, defense, the environment, port health services and emergencies are not based on projected compelling need, but what government did in 2019 with a modest increase for the current budget cycle.

This, of course, is typical government. But not only is this inadequate, it is antiquated, as health security requires a bespoke budget that covers all the risk domains, including nuclear, radiological, chemical, environmental, biological and extreme weather events.

Over the long term, Vital Signs calls for a budget review of current spending and the design of a new dedicated health security budget. In the short term, every effort should be made to give the NICD and related agencies emergency resources and personnel to upscale detection and reporting; the national and provincial health departments significantly more resources to prepare and equip hospitals beyond the inadequate – just 10 –  number of hospitals designated for managing Covid-19 cases; social development for looking after the families of those isolated or quarantined; and the department of defense whose mandate it (oddly) is to prepare communities to deal with emergencies such as these.

It should be noted that only hospitals with well-equipped Intensive Care Units (ICUs) save the lives of people afflicted with Covid-19. Most of the hospitals set aside by South Africa do not meet intensive care requirements for routine cases never mind the scale required during an emergency. Government must also have a facility to engage with private healthcare providers and non-governmental agencies – particularly the Red Cross and Doctors Without Borders – to boost surge capacity.

Second, today’s best practice catastrophic response system covers plant, animal and human health – the One-Health approach – using inter-operable cross-cutting governance that can be triggered by a chain of command backed up by the country’s highest office of the land. South Africa does not have such a system. It is, as the leader of South Africa’s high-containment laboratory and Ebola response in 2014-2016 Janusz Paweska puts it, “fragmented”.

The National Public Health of South Africa (NAPHISA) comes closest as an institution to the One-Health concept. The legislation to set it up was introduced in 2015, when I was still in Parliament serving as an opposition MP on the health committee. The Bill turned into law five years later – in February 2020, I believe – an unforgivably long time for such an important innovation.

There is no transversal governance system for emergencies and disasters. Emergency response for high-consequence catastrophic events should vest in the office of president or prime minister, as it does in the US, South Korea, Finland, Thailand, Indonesia and other leading countries in emergency response. If the threat is natural or accidental, the health authorities are the first responders. If the threat is deliberate, defense mounts the first response. As we know, some presidents and prime ministers are better at leading than others. The key is to let the health and medical science experts manage the effort, but with the full weight and authority of the first citizen’s office to back them up.

In Vital Signs, we therefore recommend that the responsibility for leading health security in South Africa should be lifted out of the department of health and placed in the presidency; and that the presidency should have the following responsibilities: (1) integrating South Africa’s health security, including its surge capacity, across relevant departments and spheres of government; (2) create partnerships with the private sector to develop new disaster prevention, detection and response technologies and systems; (3) work with civil society organisations to harness and leverage their reach into communities to better enable prevention, detection and response on a local level to high-consequence hazards; and (4) collaborate regionally with the member states of the Southern African Development Community (SADC) and the Lusaka-based Regional Collaborating Center (RCC) of the Africa Centre for Disease Control and Prevention (Africa CDC) in disaster prevention, detection, mitigation, response and recovery.

Because the executive exercise of power must always be held to account and rendered transparent, we recommend in Vital Signs that Parliament take the initiative and appoint a Standing Commission on Health Security to provide oversight of government measures in preventing, detecting, mitigating, responding to and assisting community recovery from all catastrophic events, assuring that they are consistent with the Bill of Rights and Constitution, and that the country’s legislation and regulation regime is up to the task.

Pointedly, the standing commission must also provide rigorous oversight over any government or clandestine illicit trade in weaponisable toxins, infectious agents or pathogens, left-over capacity from the time during late apartheid when government had biological and chemical weapons’ capability. Government should also appropriate sufficient funds to support sustainable high-level longitudinal research on current, emerging and future domestic, regional, continental and global catastrophic hazards and risks that may affect the country, undertaken by scientists located at the country’s medical, industrial, agricultural, minerals’ and human science councils and at newly established centres of health security excellence at universities.

These are all good plans, but in the meantime, what can ordinary citizens do to protect themselves? Wearing masks is not useful for several reasons. A main reason is that respiratory viruses can enter your body through the mucous membranes of your eyes and masks don’t cover your eyes unless one wears the specialised ones that do.

The most important thing to do is to frequently and properly wash one’s hands with soap and water for at least 20 seconds. Go to the World Health Organisation website and see what real handwashing is about. Alternatively, use hand sanitizers. In most places, hand sanitizers are the most practical as one can always have one with you. When the outbreak comes to your area, avoid places where large numbers of people congregate like theaters. In New York City, schools are being shut down and Columbia University, where I teach, is shifting towards distance learning. Overseas travel has been restricted.

If social distancing is on the cards, as it is in the US presently, stocking up with enough food that can be had now or in six months’ time is a good idea, staples like pasta, rice, crackers, cheddar cheese, and so on. The following list was partially developed in anticipation of power-outage and water-shortage issues: (1) ready-to-eat canned meats, fruits, vegetables and a can opener; (2) protein or fruit bars; (3) dry cereal or granola; (4) peanut butter; (5) dried fruit; (5) canned juices; (6) non-perishable pasteurised milk; (7) high energy foods; (8) food for infants; and (9) comfort/stress foods. Are these steps an over-reaction? They may be. But it is good planning and preparation just in case. Oh, one last thing, if none of this works, pray. MC

Dr. James is a Visiting Professor of Political Science and (non-clinical) Pediatrics at Columbia University, an International Panel Member of the Global Health Security Index and Editor of the multi-authored Vital Signs: Health Security in South Africa (Brenthurst Foundation, 2020).