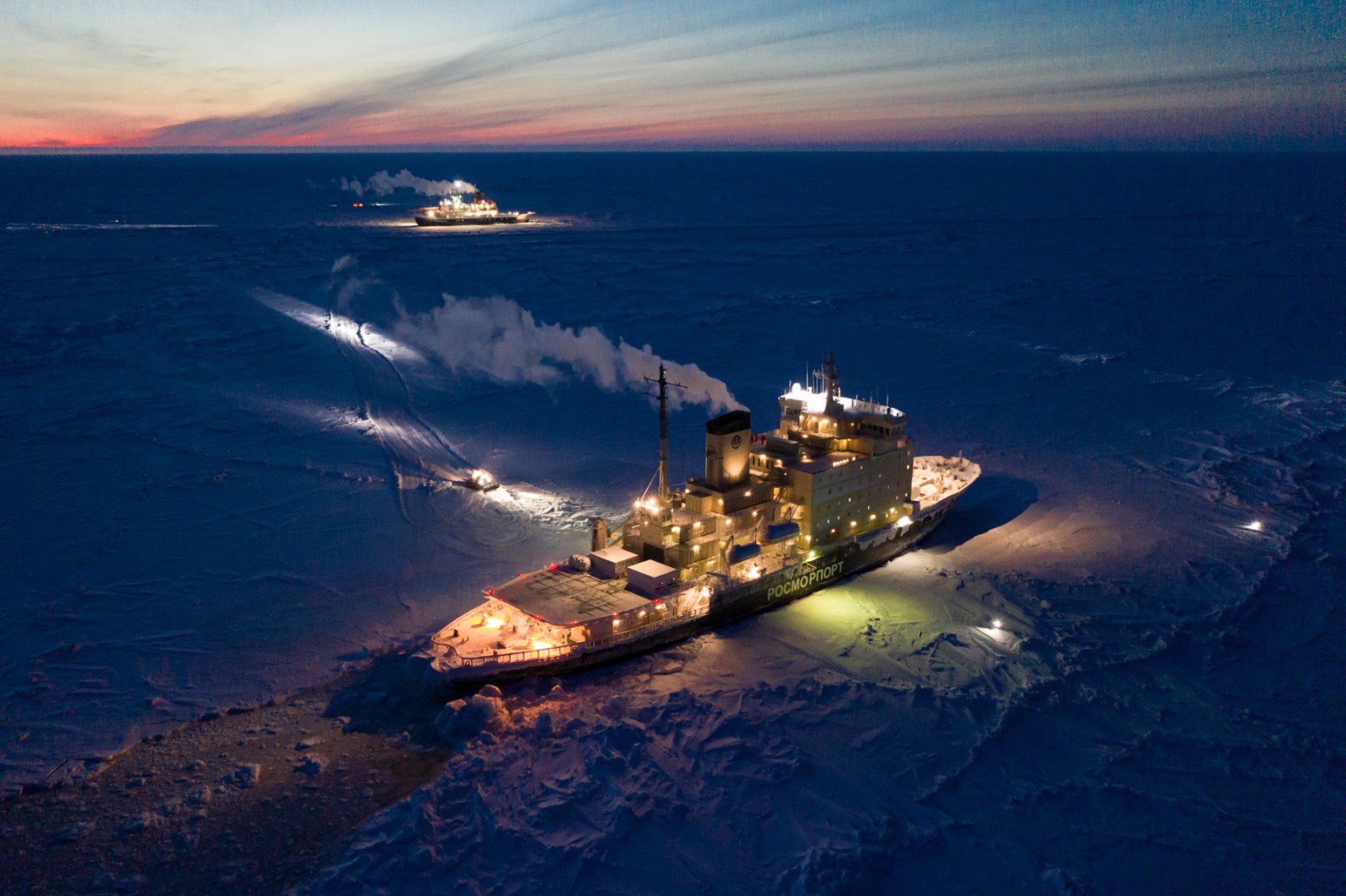 Taking its blueprint from Fridtjof Nansen’s ‘Arctic drift’ mission 130 years ago, a new quest for science ventures farther north in winter than ever before

The German icebreaker Polarstern has sailed farther north during the Arctic winter than any other ship in recorded history.

Locked in the sea ice to conduct climate research for an entire year, Polarstern’s drift edged her into 88° 36’ north last week. Her position was within an explorer’s spitting distance of the North Pole at a mere 156km.

Two days later, Polarstern’s resupply vessel, Kapitan Dranitsyn, marked the first time a ship made it so far north under her own power, so early in the year. Despite adverse conditions, the Russian icebreaker rendezvoused with Polarstern at 88° 28’ north.

Onboard the research expedition, experts from 20 nations are probing climate processes in the Arctic. For this purpose, Polarstern will float across the region, moving along in sea ice, until 2020’s Arctic autumn.

The name MOSAiC — Multidisciplinary Drifting Observatory for the Study of Arctic Climate — mirrors the complexity and diversity of this project, which takes its blueprint from the iconic Fram expedition of the 1890s.

Some 130 years ago, Norwegian researcher and explorer Fridtjof Nansen set sail on the first-known Arctic drift expedition with his wooden sailing ship Fram. It was Nansen’s idea to freeze the Fram into Arctic pack ice, after jetsam from a Siberian shipwreck was reported to have turned up in Greenland via the newly described “transpolar drift”, a major Arctic current. Nansen’s dream was to lock the Fram into ice and follow the current towards Farthest North — he and companion explorer Hjalmar Johansen would make it as far as 86° north by kayak and dog sled, setting the record, before turning south again.

Leaving the Fram and her crew at 84° north, the explorers’ audacious attempt for the Pole would contribute significantly to the science of oceanography, still in its infancy then. Johansen and Nansen, a Nobel Prize-winning champion for refugees also known for his ice-blue eyes and shock of snowy hair, showed that much of the North Pole was not a landmass, but a sea basin covered by ice.

This makes MOSAiC all the more significant: thanks to the transpolar drift, the expedition is the first to bring a modern-research icebreaker, laden with scientific instruments, so tantalisingly close to the North Pole in winter.

Co-ordinating more than 80 participating institutes, the €140-million expedition is the biggest polar-science mission yet and is led by Germany’s Alfred Wegener Institute, which also studies climate at the bottom of the world.

In Antarctica’s frozen south, the institute counts none other than the South African research station, SANAE IV, as its nearest neighbour. A humanless distance of some 300km separates the countries’ isolated outposts among the nunatak peaks and icescapes of Dronning Maud Land, as the snow petrel flies.

For several days, “fast ice” — ice attached to anchor points such as land or the ocean floor — had slowed Kapitan Dranitsyn’s progress on her resupply mission.  Bound for the North Pole, her assignment was to support the expedition’s second exchange of researchers and crew.

At 12.20pm on 28 February, she finally dropped anchor some 970m from Polarstern, moored to the same ice floe.

While the handover is in full swing on the MOSAiC floe, in Russia the icebreaker Admiral Makarov will soon leave port to supply Kapitan Dranitsyn with additional fuel on her return trip.

At the time of writing, Admiral Makarov was still at anchor in the Russian port of Murmansk, tracking data indicates.

“These records represent milestones in the MOSAiC expedition,” said the institute’s Professor Markus Rex. Also the expedition leader, he explained that the record-setting penetrations into the Arctic offer a “basis for gathering unprecedented scientific data”.

Rex’s task during recent days has been working with the institute’s logistics division to figure out ways of resupplying Kapitan Dranitsyn with additional fuel.

The institute said that fast sea ice had “forced her to consume more fuel than originally planned” — this is why Admiral Makarov will depart on her intercept course to refuel Kapitan Dranitsyn as she drifts amid the sea ice.

Meanwhile, staff and equipment are being exchanged between vessels on foot. Snowmobiles and snowcat tracked vehicles are hauling heavily loaded sledges.

On board Polarstern as well as at the neighbouring ice camp — a miniature research city on the ice near the ship — new recruits are receiving instructions from the outgoing leg’s expedition members, who have been navigating the rigours of the Long Dark Night since December.

Extreme caution is the prime rule, especially when working on the ice. Through wind chill, temperatures have dropped to -58℃. Only a day after her arrival, the channel of open water behind Kapitan Dranitsyn refroze so rapidly and acutely that the researchers could walk on it.

These temperatures also pose a problem when transferring provisions; for example, fresh produce must be transported in heated containers.

A remarkable world of life beneath the ice

“Over the past few months, we’ve been able to observe winter at the North Pole more consistently and precisely than ever before,” he revealed. “The ice thickness has doubled to an average of 160cm since December.”

That’s a growth rate of some 10cm per week.

Due to the warming Arctic Ocean, smaller and thinner ice floes are reportedly becoming more common. Driven by the wind, these ice floes can crash and overlap, producing knoll-like “hummocks” towering up to 4m.

Much of the hummock mass lurks beneath the water, just like icebergs. Known as bummocks, these submerged sections can be several metres thick — a phenomenon that represents a challenge for the resupply icebreakers.

Ice, onboard as well as weather-balloon readings, have revealed air temperatures just above the ice that were far lower than at a height of 20m.

In the lowermost 10m, there were temperature differences of more than 4℃, which can vastly influence ice thickness.

Expedition scientists have also sent remotely operated vehicles into the waters beneath the ice, unveiling a remarkable world of life persisting beneath the Polar Night’s crushing weight.

This has given researchers the chance to experience more scientific firsts, even as they work in the grip of this tenacious yet tender frontier — a wilderness as hostile to humans as our planet-heating activities may be to it.

“We’ve never had the opportunity to study zooplankton and polar cod up here so extensively at this time of year,” said Haas.

“In February, we even repeatedly saw a seal under the ice, which is apparently finding sufficient food, despite being practically at the North Pole. On the surface, we sighted a polar bear and several Arctic foxes.”

In the next few days, the new science team will assume the reins for the latest leg of Polarstern’s voyage.

As crepuscular light creeps into the gloom, this phase of the expedition will make cargo transfers easier than the logistical operations of autumn and high winter.

Even now, there is a perceptible several-hour-long phase of twilight each day.

However, over the next few weeks, the sea ice is set to become even denser, which is why the next exchange, in April, will most likely be done by plane.

For this purpose, the snowcats have bulldozed a 900m-long ice airstrip.

In addition to flights for exchanging staff and crew, the third leg will include scientific missions with the research aeroplanes Polar 5 and Polar 6.

These will be based in Svalbard, the settlement at Norway’s remote archipelago used mostly for research, to make flights to the ever-drifting Polarstern. DM

Some of the victuals consumed by expedition members and crew.

The distance that the transpolar drift carried Polarstern from 13 December to 27 February. Given the drift’s meandering course, the ship covered a linear distance of 406km.

The expedition’s nearest proximity to the North Pole.

The amount of data gathered by the experts.

The stretch to an automated monitoring station by ski, completed in total darkness. This was the longest excursion from Polarstern so far.

The time during which work on the ice had to be suspended, due to fog and a major snowstorm.

Batten down the hatches, sailors — this is the Polarstern’s top drift speed.

The number of polar bears seen during this leg. An automated camera just happened to snap a photo of the lonely bear at night as it was sniffing instruments at the remote sensing station.

The temperature plunge from an unseasonably warm -11.4℃ on 1 February. This was the most frigid cold snap observed during this leg of the expedition.