Breaking bread on the forecourt with the fabulous Baker Brothers 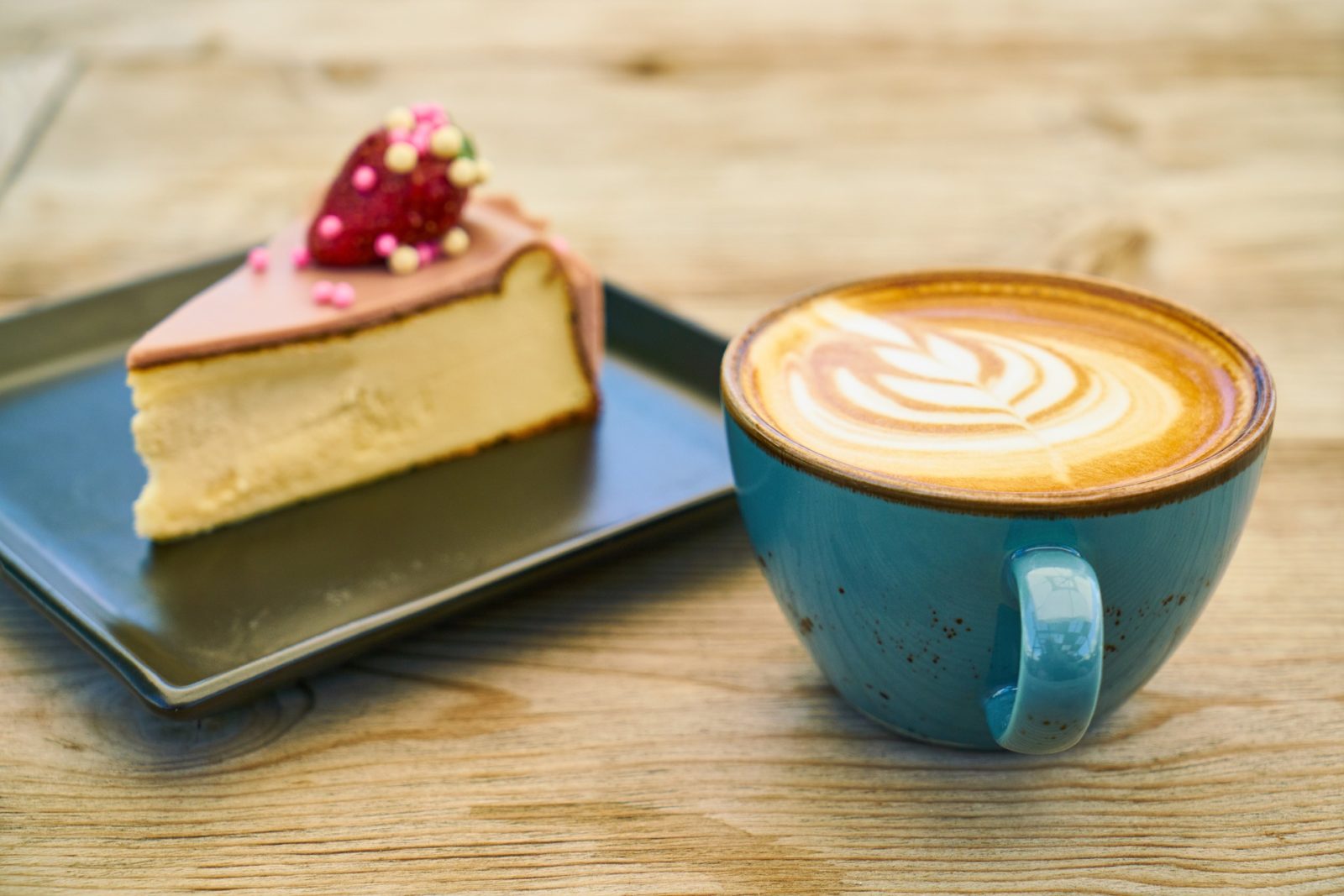 Cappuccino and cheesecake. Generic image by Engin_Akyurt from Pixabay

Traditionally the closure of a petrol station does not create a lot of sadness. But the shop attached to the Total garage in Sea Point was more than a place to buy cake or a cup of coffee. It was a community meeting point.

If you drive by 345 Main Road in Sea Point, you’ll see a shuttered petrol station. Behind the boarded-up forecourt is an empty shop that, over the course of six years, developed from a convenience store with a small coffee counter to a full-blown cafe and bakery that cultivated a clutch of devoted customers in the process.

Now the bakery and coffee shop that was located at the now-closed Total in Sea Point has moved to De Waterkant with all of the baked goods it carried in Sea Point and a much larger line of imported products. The new shop is called The Baker Brothers; all of the staff have moved with it and a lot of the customers.

“Anybody who had family visiting, the first thing they would do is bring them to the coffee shop. People would call from Joburg to say, ‘I’m coming down, keep a cake for me’. The tradition of the cheesecake and the atmosphere was unique,” said David Samuels, the former owner of the original, now-shuttered Sea Point site.

After Samuels bought in to the property, it was revamped and reconfigured. With the leftover 300 metres of empty space, Samuels enlisted his nephew, Steven Kahn, to open a garage shop. Serendipitously, a Sea Point institution called New York Bagels was closing at the same time. So Kahn hired some of its baking staff.

“The legacy of NYB was the cheesecake and we continued with those cheesecakes. Then we added the coffee shop and the kitchen. And then it became a centre for retired people, amongst others. It just developed along those lines,” Samuels said.

Hazel and Leslie Cohen, 83 and 86, lived within walking distance, so often they’d pop in for breakfast and again for lunch. “We only found this two years ago. Since we found it, we come every day,” Leslie said.

Peter Louw, a Sea Pointer of 35 years who works as a stock controller at neighbouring Sea Point Plumbers, was his company’s designated Bonjour runner. He would come in for seeded hamburger rolls for breakfast, returning again (and again) for bagels, cakes, cappuccino – “whatever they need for the office”.

“I’m here in and out maybe five times a day,” he said around 11am, on what was his third visit that day. Louw used to shop at NYB and he knew the staff from there. “We followed them to here”.

In getting the shop going, Kahn wanted to offer “something unique that would fit into the area”, discovering that they still needed to supply the chocolate, the glass bottle of Coke and the packet of chips.

A builder won’t fill up his car at your garage if he can’t get his snacks too, Kahn said. A Porsche driver might come in asking where the Wilson’s toffees were. “I realised you need to have everything when you’re in a service station forecourt.”

“We weren’t doing the volumes in the beginning but we were getting there slowly. He was prepared to invest the money so that we could try something,” Kahn said of Samuels. In those early days, Kahn put in long hours, most of it in the shop and on the forecourt getting to know the customers.

“We had relationships with people and they stuck with us because of that,” Kahn said, listing how those customers would use the site for everything: petrol, car washing, cake. At that stage there wasn’t a cafe; just enough space to sit for a coffee and munch on something from the bakery.

Bonita September was one of the first staffers to work in Kahn’s shop. She recalls there being a small coffee counter with six brought-in sandwiches in the fridge that one could buy, no proper seating and no menu. By the time the coffee shop/bakery closed in January 2020, it had a full menu, extensive seating and a raft of regulars.

September described it as a “second home” for the folk she served every day. “We had one that was 102 that still comes in here for cake.” People from the Southern Suburbs would drive through for the cakes, as well as from Plettenberg Bay, she said. “We even had some cakes that flew to Joburg, to Israel – those places.”

Part-time Capetonian Arnie Witkin said one of the first things he does when he arrives is to visit Bonjour and buy a chiffon cake. “I carefully cut the first piece, never sure whether I’m being greedy when it is the size of a large T-bone steak. Because of the packaging, a cake can remain fresh for five or six days and I have a piece a day, usually around 3.30/4pm. Sometimes I set my alarm to remind me,” he said.

Despite describing himself as a “non-baker”, current co-owner Matthew Miller has come up with some hit-making variations on the shop’s standard cheesecake: one with chunks of Wendy’s Fudge, one with pieces of Sally Williams nougat and the latest iteration with bits of the imported Daim chocolate bar.

“The nougat didn’t work because when you sliced it the nougat was too big and it would tear, so the slice of cheesecake would look mangled,” he said. Even so, it sold out each time it was made during its short debut. “We try different things and see how they do every couple of weeks.”

In 2019 Samuels sold the coffee shop, bakery business and convenience store to Miller and Vincent Neethling, the latter having been his manager for four years. Neethling and Miller remain the owners of the new Baker Brothers venture.

“If it wasn’t for us being popular and our reputation out there, generally people wouldn’t walk into that kind of thing and go to the bakery,” Neethling said.

The new space in De Waterkant is pretty comparable in size but designed from scratch, creating a more efficient layout, and with room for kitchen expansion: 240 squares on the inside, 85 on the outside, natural light in the kitchen, bright colours and modern fittings in the cafe. The new clientele will also look different: there are 84 Airbnbs above them in the building and a variety of corporate businesses in the area.

The broken tiles and fluorescent lighting won’t be a feature any more, but then neither will some of Neethling’s favourite customers.

“I’m talking the 85-to-100-year age range: there are 10 or 15, 18 of them that are regulars in my store, come in every day, and it kills me that they won’t be able to make it down this side. I’ve grown very fond of them. The last thing I want to do is walk away and say goodbye and thank you.”

So the partners have done deals with what they call “distribution depots”: businesses situated nearby to the old Bonjour that are setting up coffee shops where previously there were none, which they will supply with their baked goods. Bob and Anne Pierce from the nursery on the old site have incorporated a coffee shop in their new space a few blocks away, and Frans Maritz at the Engen garage across the road will be setting up a coffee shop in March.

“It won’t be the same,” regular Hazel Cohen said of the “replacement” coffee shops. “We come here because the treatment and the atmosphere is so good. We come here because it’s an amazing crowd of people,” said her husband, Leslie. “Miguel, you know, he’s a great guy. He makes the most magnificent cappuccino. Not too many people make a decent cappuccino. Bonita’s a fabulous girl.”

Jean Miguel Oyange Mbuli Ewunza, or “Ted Danson behind the bar”, as Miller calls him, has worked there since 2014. “The coffee bar was not popular like today,” he said of when he started. “We have a big community here. For five years I know all of them.”

The Cohens met Maurice and Michelle Goldberg at Bonjour and Michelle has offered to take them to the new location, Hazel said. Michelle had ordered the muesli for years, and each time she got to the bottom of the packet, it was “like sawdust”, said her husband, Maurice.

“They used to have muesli on the menu. Then they took it off the menu so Matthew and Vincent suggested that we buy the muesli from them,” she said.

“Before that, we had an issue,” Maurice added.

“No, we didn’t have an issue,” she said. “They took it off the menu, so we buy a packet of the muesli or granola and they put my name on it and they keep it in the office, and then when I come here, I get my thing of yoghurt which they charge me R20 for. They’re very accommodating.”

“We are so unhappy that they’re leaving. We live around the corner and we walk here. We’ll get there,” Leslie added, of the new shop, “but not every day.”

It’s the second last day of trading at Bonjour. The bakery in the back has black plastic sheeting across it in preparation for the ovens to be moved out later that afternoon.

‘Bonjour’ is the trademarked name of all Total garage affiliated shops.