Global equity investor complacency turned into a full-blown panic last week as stock markets sold off sharply and entered correction territory after having declined by more than a 10%. The rand was swept along in the frenetic current and may have further to go if any further bad news, including a rating downgrade, materialises. Concerted, globally coordinated policy measures may provide the rand, and global financial markets, with a safety net, preventing further damaging sell-offs.

Global equity markets went from climbing a wall of worry as the historically longest bull market progressively broke new records in its 12th year to climbing a wall of fear last week and experiencing their quickest and sharpest sell-offs ever.

Emerging markets bore the brunt as wholesale panic set in and prompted a mad rush to safe-haven assets like the US Treasuries. The rand led the sell-off, depreciating almost 5% to almost R15.70 to the dollar, immediately in the wake of a South African National Budget that had some good news on the government wage bill to share.

The abrupt, unexpected and unprecedented turnaround prompted comparisons with the 2008 financial crisis but that isn’t helpful because not only is the coronavirus a non-financial crisis of a completely different sort. But the macro-economic context is fundamentally different and thus it’s impossible to predict when the virus will be brought under control. It’s also exceptionally difficult to sort the facts from the fears, which makes any valuation or economic forecast an educated guess at best.

Against this backdrop of uncertainty and unbridled fear, policymakers are at last acting on the recommendation of multilateral organisations, like the International Monetary Fund (IMF) and appropriately named Organisation for Economic Cooperation and Development (OECD), that the only way to find a way of achieving a new post-crisis normal is to take coordinated fiscal and monetary policy action. The OECD is expected to have a teleconference this week to discuss how to go about this.

The coronavirus has had an unquantifiable impact on supply chains, and consumer sentiment and thus demand, which has so far held up the world economy, may well be the next in line. As the world moves further away from any economic definition of normal, it remains to be seen how successful even coordinated action on a massive scale would be in kickstarting economic growth.

At issue is the fact that the coronavirus may have an impact that extends beyond the short to medium term, exacerbating fundamental changes in world economic dynamics that have been underway for a while. Paul Donovan, UBS Global Wealth Management chief economist, looks through the short-term noise and contemplates the state of the world economy after the virus. He says longer-term the virus could accelerate three trends that have been underway for some time.

Firstly, the virus could speed up the process in which technology has been slowly encouraging localisation as opposed to globalisation “particularly coming after the uncertainty of US President Trump’s trade taxes.”

Secondly, homeworking could become more common once employers and staff discover that it works. Says Donovan: “It often takes an external shock to encourage home working (the 2012 Olympics may have driven the rise of UK home working).”

Thirdly, the longer-term implications of the virus could include changing transport and logistics, rising demand for investment goods and thus local production and falling demand for office and retail real estate.

Before we get anywhere close to assessing whether fundamental shifts in the way the world works come to fruition or not, however, we will need to see whether the interest rates now baked into market expectations materialise and, if they do, whether they will have anything near the desired impact.

On the weekend, Federal Reserve chairperson Jerome Powell gave an impromptu speech designed to calm market jitters. He said the virus posed an “evolving” risk and the bank would continue monitoring it closely. US President Donald Trump predictably urged the Fed to be a leader rather than a follower by taking down rates to the equivalent, if not lower, than the rates of “other countries”. Does this increase the possibility of the US moving into negative interest rate territory like the European Union?

Investors and economists alike have interpreted Powell’s comments as a green light for rate cuts in the US of anything between 50 to 100 basis points in March. This is not a view held by all market commentators and there is some scepticism whether rate cuts will have any effect. Instead, government spending and tax cuts are seen as likely to have a more targeted and direct impact in averting any sign of a global recession. Most in need of government support may be the companies that could well be knocked sideways for at least a couple of months as a result of the disruption to their businesses.

While the coronavirus has, up to now, inflicted huge dislocations in the supply chain, there are concerns this could transition into demand dislocations based on the extreme fear that is taking hold as the virus spreads to countries like Nigeria, which hadn’t had incidences yet and is the first sub-Saharan African country to fall prey to the virus. The first death in the US has also added to the panic, with big multinational companies, like Apple, urging staff to avoid all unnecessary international travel.

What does this mean for South Africa and the rand? ING Global Head of Strategy and Head of EMEA and LATAM Research Chris Turner says: “The rand is very much in the cross-hairs of the coronavirus and its impact on commodity demand and risk assets.” In the graph below, Turner points out that the rand falls in the wrong quadrant, accompanied by the Russian rouble, which was also one of the hardest-hit currencies last week, the Chilean peso and Malaysian ringgit.

Based on his Behavioural Equilibrium Exchange Rate (BEER) medium-term fair value model, the dollar rand exchange rate is in a vulnerable position because, before it depreciated to R15.66, it did not look particularly overvalued. A BEER model calculates an exchange rate based on the actual behaviour of the currency in terms of various applicable economic measures. Even at its current level, Turner believes the currency could still have some way: 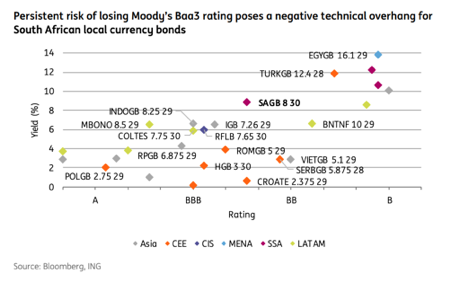 While it is anyone’s guess when the overhang of the coronavirus is likely to dissipate,  Morgan Stanley has spelt out three possible scenarios: containment by March; disruption extends into the second quarter as virus escalates in new geographies and recession risks escalate as the virus persists into the third quarter.

Though these may be useful to get a sense of the possible impact of these different possible outcomes, it isn’t really helpful in engendering any sense of certainty and comfort. Any of these could be possible at this point as the number of victims keeps rising. As long as the uncertainty persists, emerging markets like South Africa will bear the brunt of any fears that take the financial markets in their grip.