People’s COP shows US where to spend HIV money 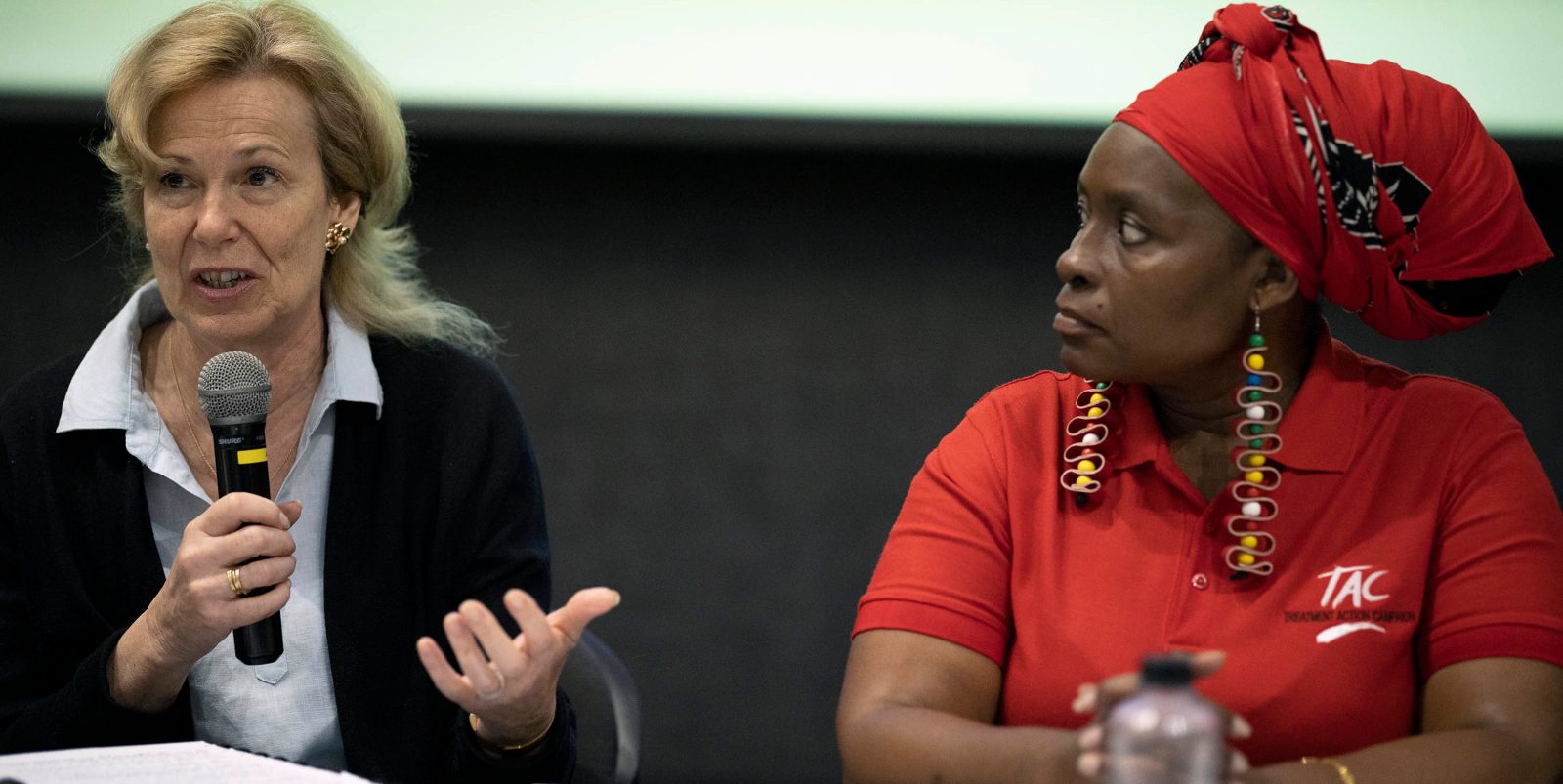 Thanks to community-led monitoring in South Africa, we now have the data to back up the stories we have all heard about – early morning queues that last all day long when clinics fail to open on time and then also close early.

Late in 2019, a woman living with HIV went to a clinic in South Africa to collect her antiretrovirals (ARVs) after missing her appointment by just one day. She arrived at the clinic at 6am to queue and when it opened she went to the administrator to get her file. When the administrator saw that she had missed an appointment, he shouted at her, calling her lazy and saying she obviously didn’t care about her life, never giving her a chance to explain why she had missed the appointment in the first place. Other patients began staring and listening as the administrator berated her. Humiliated, the woman left without getting her medicines.

She has never returned to the clinic since.

This story will not shock anyone who knows the public health system in South Africa. We’ve all heard stories like this one — or experienced it ourselves. The fact is, our clinics are in crisis, and it is a major threat to the HIV response.

Thanks to community-led monitoring in South Africa, we have the data to back up the stories we have all heard about — early morning queues that last all day long when clinics fail to open on time and then also close early. Community-led monitoring has generated data showing that poor filing systems and even poorer staff attitudes cause too many people living with HIV to stop taking their life saving treatment. And we know the positive effects functional adherence clubs, support groups, and treatment literacy education can have — but only when those services are in place. And our data shows that at times, these critical services are non-functional, or even nonexistent.

What is community-led monitoring? It’s a strategy that trains, supports, equips, and pays members of directly affected communities to carry out routine, ongoing monitoring of the quality and accessibility of HIV and TB services. After years of calling on the United States President’s Emergency Plan for AIDS Relief (PEPFAR) and government to take the crisis in our clinics seriously, and focus financial resources in addressing these widespread challenges, the “Ritshidze” system of community-led monitoring was created in 2019. Ritshidze community monitors collect data using a variety of methods that reveal insights about the problems with healthcare services and suggest solutions at the facility, district, provincial, and national levels.

That data is then integrated into evidence-based advocacy that brings new information to the attention of decision makers and holds them accountable for acting on it. Data gathered through Ritshidze is at the centre of this year’s “People’s COP”, an advocacy document aimed at influencing PEPFAR as it determines how it will spend millions of dollars on HIV and TB programmes in South Africa through its Country Operational Plan (COP) for 2020. The People’s COP clearly outlines a number of community recommended interventions that would improve the state of the national HIV and TB response, including measures to get people to start and stay on treatment.

In the first round of Ritshidze monitoring, more than 65 fieldworkers, largely young women living with HIV, collected data at more than 100 facilities across the Eastern Cape, Free State, Gauteng, KwaZulu-Natal, Limpopo, Mpumalanga, North West, and the Western Cape.

We found that staff shortages are a systemic problem — 91% of facility managers report insufficient staffing from assistants and security guards to doctors and pharmacists. Patients feel the effects in long queues — of the 1016 patients surveyed, reports showed they arrived at clinics as early as 3am and waited an average of 5,24 hours with some waiting as long as nine hours to be attended to. One in four patients told us they feel very unsafe while waiting for the clinic to open — with some reports of people being attacked while they wait for the gates to open in the early hours. Patients reported that only 6% of the clinics monitored were open for the extended hours required by a circular issued by the National Department of Health in May 2019.

Slow service combined with poor staff attitudes at times cause people living with HIV to stop taking their ARVs. One patient told community monitors that they stopped taking treatment because of the long queues. Even those living near clinics reported waiting from 6am until 4pm and that those long waiting times resulted in them not returning for their next scheduled appointment to collect ARVs.

Dysfunctional filing systems are contributing to the excessive queues. Patients reported that disorganised and lost files result in longer waiting times — and even at times questions about what medications they are there to collect. A total of 25% of people living with HIV report being sent to the back of the queue if they miss a scheduled appointment to collect ARVs, and 15% report being reprimanded — further discouraging people living with HIV who have stopped treatment from returning to care.

On top of that, patients are still having to return frequently for HIV treatment refills, despite promises by the government in 2019 to begin to allow people living with HIV to receive three months’ supply. Most patients report receiving two months’ supply, while some reported refills of only one month, or just 1-3 weeks’ supply. Nearly a quarter of patients reported a stockout or shortage of medicines in the last two months, and one man told us how he had stopped HIV treatment altogether after being sent home empty handed twice from the clinic.

Another worrying factor is the rollout of index testing in South Africa. Index testing is a case finding strategy where people living with HIV who are virally unsuppressed or newly diagnosed are asked to disclose their sexual partners and children so that they can be targeted for HIV testing services. This is always meant to be a voluntary process. Worryingly, 23% of people living with HIV who reported being asked to provide the contacts of their sexual partners and children for testing said they could not say no or refuse to give the names. Worse, while every precaution should be taken to not put people at risk of violence or other adverse events (such as loss of financial support, abandonment, violations of confidentiality and privacy), 53% of facility managers interviewed said they still contact all the partners even if the individual has reported the partner as violent or potentially violent.

Data is important, but community-led monitoring also aims to have an impact — so these trends change. Last week, we presented the data collected by the Ritshidze programme to Ambassador Deborah Birx, the US Global AIDS Coordinator during a public meeting pushing PEPFAR and government officials to make the changes needed to begin fixing the broken healthcare system that is causing too many people living with HIV to stop HIV treatment, or not start in the first place. Community members shared their stories of how understaffed clinics and healthcare workers with poor attitudes cause them to struggle to access HIV and TB treatment and care.

The problems revealed at this meeting were not new, but with powerful personal stories backed up by data collected by community monitors, there was no room for decision makers to deny that changes are needed — and that those changes should begin with the demands activists have pushed for in the People’s COP over the last several years.

After a week of planning and negotiations last week involving PEPFAR, government, multilateral agencies and civil society, a draft of the 2020 Country Operational Plan is on the table. Positive commitments were made by both PEPFAR and the government. Notably, PEPFAR committed to scale up and maintain 20,000 healthcare worker positions at the frontline of the HIV and TB response into 2020 — critical to reducing the burden on under resourced clinics. Government committed to address concerns around poor staff attitudes, as well as reports of people living with HIV being sent to the back of the queue for missing appointments, something not required by the national health department. A number of other commitments were made around getting more people into adherence clubs and support groups, funding community-led treatment literacy, ensuring accountability among implementers carrying out index testing, and improving TB infection control across clinics, to mention a few.

Activists are busy reviewing the text now to ensure the interventions in the People’s COP have been correctly and fully included — and that commitments have not been overlooked or forgotten. As we have learnt in past years, just because something is promised or written down, we cannot take it for granted as a victory; it is simply a first step. Through Ritshidze, next we must track what is actually implemented on the ground — holding PEPFAR and government accountable for their obligations to people living with HIV and TB. MC

Anele Yawa is the General Secretary of the Treatment Action Campaign (TAC) and Lotti Rutter is an Associate Director of International Policy at Health GAP. Both are involved in the Ritshidze project.