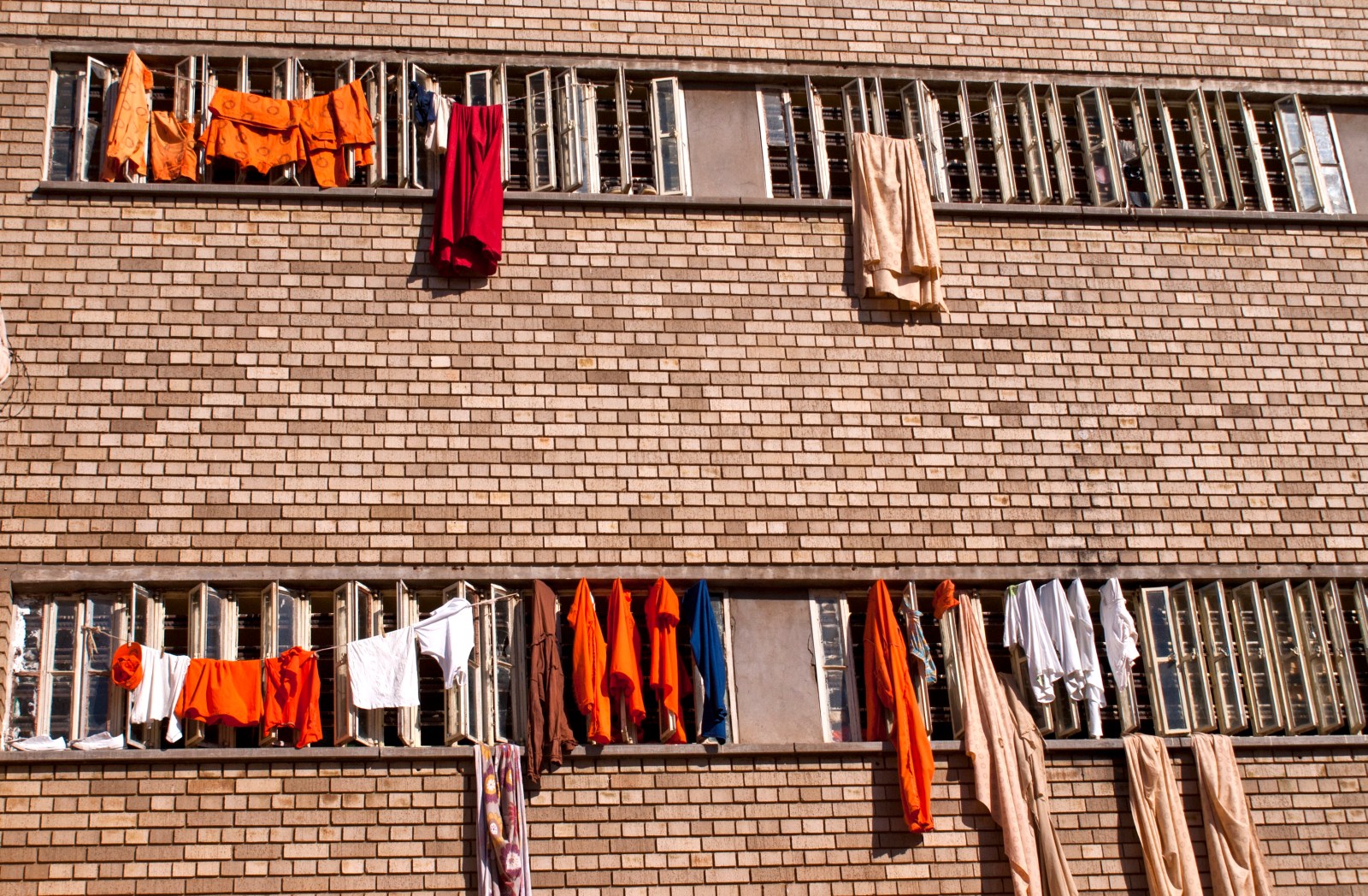 Clothes hang out of prison cells at the Pretoria Central Prison in Pretoria (Photo: Franco Megannon/Gallo)

Prisoners describe the Judicial Inspectorate of Prisons as a ‘bulldog with rubber teeth’, with dismal figures showing that there is 100% non-compliance with some of their requests to investigate deaths and assaults in the country's prisons.

On Tuesday, 3 February 2020, counsel for NGO Sonke Gender Justice argued that a law keeping the Judicial Inspectorate of Prisons dependent on the Department of Correctional Services for its financial and operational needs to be declared unconstitutional. She has asked the Constitutional Court to strike down the law that keeps the inspectorate dependent on the department.

South Africa’s Judicial Inspectorate of Correctional Services (JCIS) has never been independent from the department for which it is supposed to provide oversight. The Constitutional Court heard lawyers arguing that the law keeping the inspectorate chained to the country’s prison authorities should be declared unconstitutional.

Shocking testimony was presented in papers before court to the justices of the Constitutional Court on how, in some cases involving deaths and assaults of inmates, the department of correctional services has not complied with a single request for information from the inspectorate.

The case first came before the Cape High Court after NGO Sonke Gender Justice, with the assistance of Lawyers for Human Rights, brought an application to reduce severe overcrowding in the trial-awaiting section of Pollsmoor Prison. The court granted them an extensive interdict, but also declared parts of the Correctional Services Act that interfered with the independence of the inspectorate to be unconstitutional. Their legal action in the High Court and the Constitutional Court was funded by Legal Aid SA.

After fighting the case in the High Court, the government did not oppose the application to have parts of the Correctional Services Act declared unconstitutional. Senior state attorney Nyiko Nkuma confirmed that they will not be opposing the case that will lead to new legislation being drawn up to ensure the independence of the inspectorate.

South Africa’s inspecting judge of prisons, Edwin Cameron, stated in an affidavit that his staff were already preparing a new bill for Parliament’s consideration that will allow the JICS to finally function independently. He said he has seen the correspondence of his predecessors and records of meetings in which both the Ministry of Justice and Correctional Services, the department and officials indicated their support for an independent JICS.

Advocate Nazreen Bawa for Sonke Gender Justice argued that this control led to, among other issues, severe budget cuts for the JICS in the previous financial year when they lost 22% of their funding.

“Sonke Gender Justice submits that the JICS, as presently constituted and mandated, lacks the necessary structural and operational independence and legal powers in order to discharge its functions rationally, effectively and to maintain public credibility. For example, section 91 of the Act states that ‘the Department is responsible for all expenses of the Judicial Inspectorate’.  This has resulted in a situation in which the DOJCS determines how much money the JICS shall receive and what it should be spent on,” Bawa added.

She argued further that the JICS is neither financially nor operationally independent from the department and is also not perceived as being independent by the greater community.

Annual reports from the JICS from as far back as 2011 contain complaints that the body was unable to function properly because the department’s financial constraints were delaying their work. In its 2015/2016 annual report, the JICS complained that it had little influence or opportunity over its finances and human resources as the budget was determined by the department in consultation with Treasury, with limited consultation with the inspectorate. “The Judicial Inspectorate has had to limp from month to month with a small number of staff wearing multiple hats in order to get the operations going,” the report reads.

A 2015 study by Africa Criminal Justice Reform and the Dullah Omar Institute also concluded that the JICS had neither administrative nor financial independence from the department. “By controlling the budget of its oversight institutions, the department essentially has the capacity to decide to what extent JICS will be able to fulfil its mandate and expand its capacity, should this be required,” the report states.

“[The Department] is in a position to financially starve the JICS,” Bawa argued.

According to a comparison placed before the court, the JICS also received significantly less money than any of the other watchdog bodies in South Africa like the South African Human Rights Commission (SAHRC), the Public Protector and the Independent Police Investigation Directorate (IPID).

Bawa argued that the JICS faces a far greater demand for assistance from inmates than any of these other watchdog institutions. She mentioned that between 2015 and 2016, IPID received 7,014 complaints, the SAHRC processed over 9,000 complaints (with an 89% finalisation rate), and the Public Protector handled 17 374 cases. In the same period, the JICS Regional Offices handled 60,767 complaints. This excludes the 456,994 complaints handled by independent prison visitors.

“The crux and purpose of this application is that the department should have no control over JICS’ finances at all. After all, what the department can do, it can also undo. JICS will never be truly secure and independent until it is protected by statute and has financial independence from the department,” she argued.

“At this stage,” Bawa added, “the JICS can do nothing but complain.”

“JICS does not even have its own website or set of IT systems. The department holds the administrator rights to all the systems which JICS uses. JICS’ email domain is the same as that of the department and the internet access is also centrally controlled by the department,” she added.

The court also heard that several requests for documents, vital to JICS investigations into unnatural deaths in prisons, either arrive very late or not at all. This was especially true of post mortem reports, according to papers before court.

In their 2015 study, the Africa Criminal Justice Reform and the Dullah Omar Institute found that the JICS had complained about the department incorrectly classifying deaths, submitting incomplete medical files, and refusing to release post-mortem and toxicology reports and not cooperating with the police and the JICS to investigate unnatural deaths in prisons.

According to JICS’ own statistics, they investigated 20 deaths in South African prisons in 2014. In 19 of the cases, the department had not provided them with the documents they had requested. In the next two years, the department did not comply with 100% of requests to supply the JICS with reports into unnatural deaths of prisoners.

Bawa further argued that the public also did not perceive the directorate as independent. She said prisoners described it as an organisation whose hands have been cut off or a “bulldog with rubber teeth”.

She asked the court to confirm that three sections of the law, that interfered with the independence of the inspectorate were unconstitutional. It is expected that, if successful, the court will suspend their order for two years to allow Parliament to amend the law.

The court has reserved judgement. MC